Hiking through the area that burned in 2021’s Dixie Fire, I was dirtier than usual. Every footstep produced a small puff of fine dust, which stuck to my sweaty legs. Campsites were blanketed in ash, and fallen trees were covered in soot. Making camp, breaking camp, and clambering over deadfall meant that my hands were constantly filthy. Each time I swatted away mosquitoes, rubbed my eyes or picked my nose, I added another dark smudge to my face. It occurred to me that I probably looked like a soldier who’d applied camouflage face-paint.

Finding a campsite beyond the range of falling trees or branches could be time-consuming. Halfway through the burn zone, I detoured a quarter-mile from the PCT along a trail leading to the summit of Butt Mountain. Rain started falling just as I reached an exposed saddle covered in small rocks. It wasn’t an ideal place to pitch a tent, but I didn’t have much of a choice.

Safely inside, listening to the patter of raindrops, I started reading Farout comments. The mountain was living up to its name: it was indeed the butt of many jokes. They were very childish, but very funny. I added mine (something about Uranus) to the list, then reverted to being an adult. 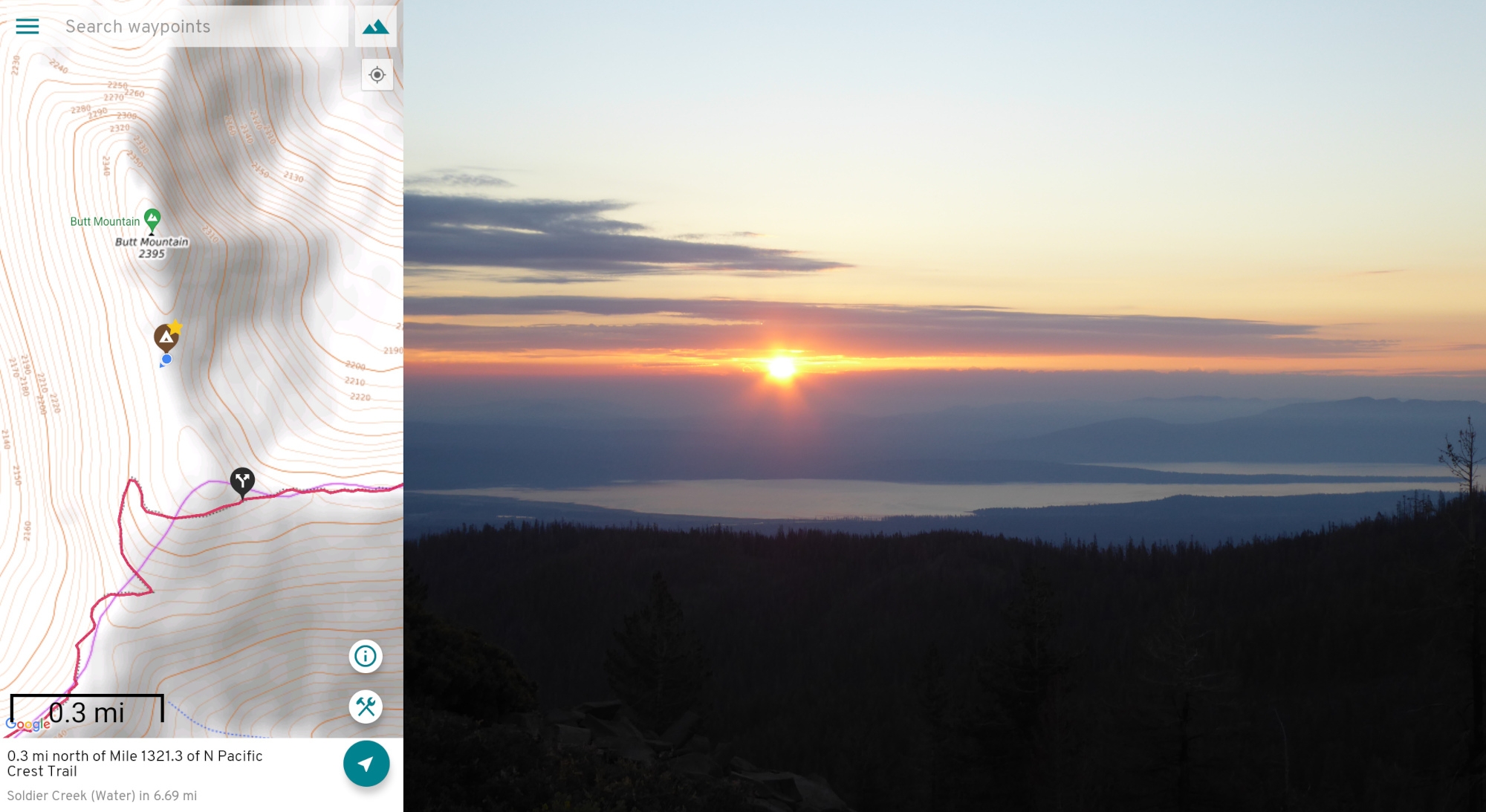 The next morning, I hitched into Chester with a pair of NOBO’s who arrived at Highway 36 shortly before I did. Two pieces of bad news were also waiting.

Apparently it’s OK to camp in Chester park, but I was really looking forward to a shower and a comfortable bed. After paying more than I wanted to for one of the two remaining rooms in town, I hung out at the park until it was time to check-in.

Before touching anything in my hotel room, I knew I had to take a shower. Looking at my dirt-streaked face in the bathroom mirror, my suspicions were confirmed. However, I looked less like a camouflaged Navy Seal, and more like a chimney sweep in a Disney movie. Also, I hadn’t shaved in nearly two weeks. I was tempted to change my trail-name to Hairy Poppins.

Mid-morning the next day, I was back in the sepia-hued scenery left behind by the Dixie Fire. My eyes again became accustomed to seeing only shades of brown, and the rare pockets of unburnt forest were a surprising reminder that other colors existed. Lassen Peak, first spotted two days earlier, would occasionally appear in the distance to remind me that I was making progress. By now, the mountain was less than 15 miles away.

After camping near the North Fork of the Feather River, I entered Lassen Volcanic National Park, and crossed most of it in a day. Thanks to my bear canister, I felt slightly smug about being able to camp within the park. I reached my campsite mid-afternoon, filtered water from Soap Lake, and sat in the shade while the sun sank lower in the sky. Then I sat outside my tent, watching as the bees buzzed from flower to flower and the thru-hikers headed for the park boundary. Both types of creature moved with a real sense of urgency. 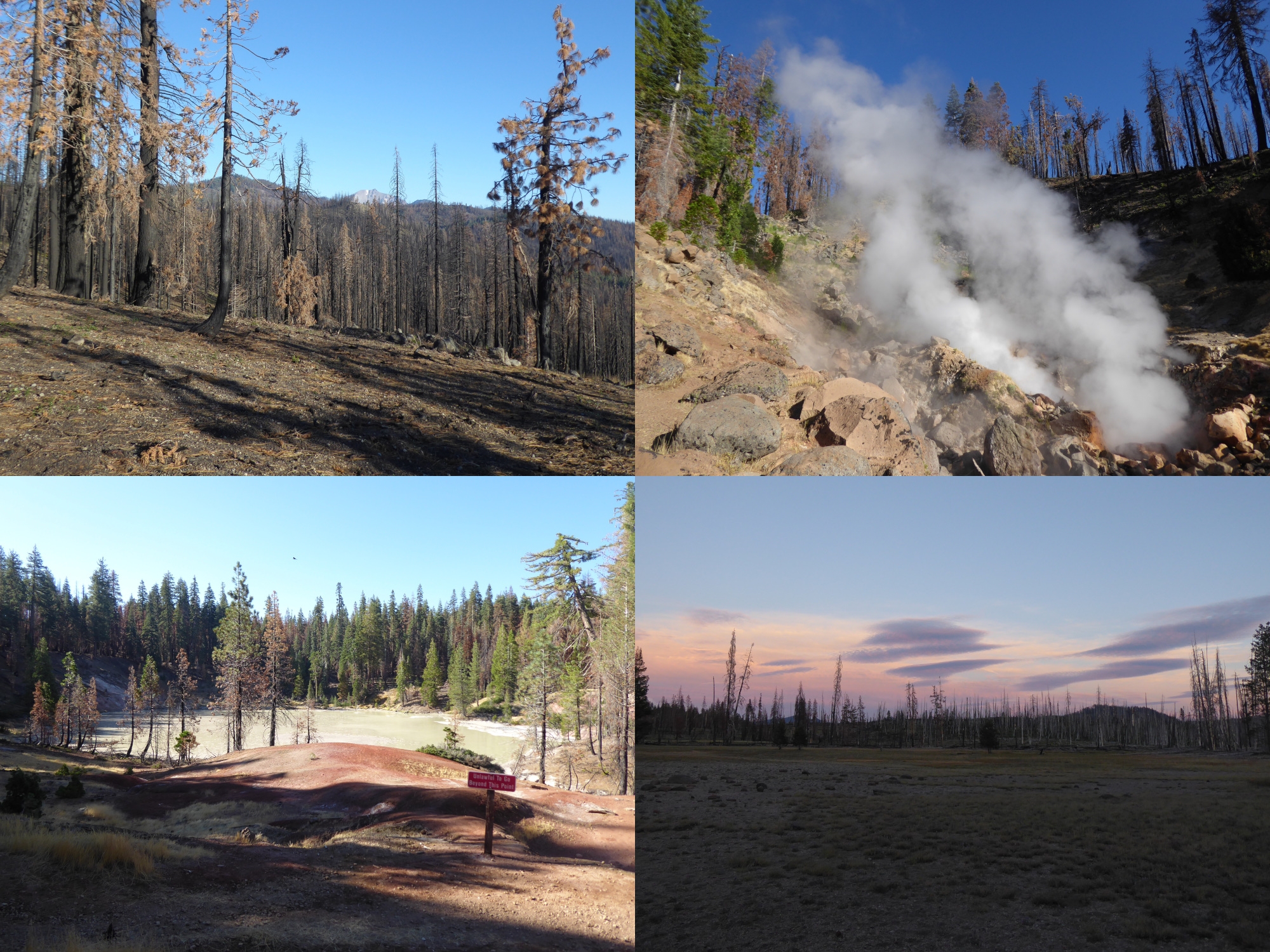 In the morning, I also had the urge to move quickly. It was about 15 miles to Old Station, and if I hurried, I could make it to JJ’s Café in time for a late breakfast. On trail just after six, I soon reached the northern boundary of the national park. Just beyond, there was a miniature circus of thru-hiker tents, and a couple of miles later, I finally exited the Dixie Fire burn zone. The trail was mostly downhill, and I was able to complete “10 before 9” despite getting slightly bogged-down in a sandy section.

Breakfast at JJ’s Café was everything I hoped it would be. I resisted the temptation to overeat so that I had an excuse to stop at the “Fill Up” gas station next-door. I visited the Subway Cave Lava Tubes on my way out of town, then dealt with the short climb to Hat Creek Rim. Even though the air was hazy, Mount Shasta was visible about 60 miles away. Instantly, I felt a connection to my 2021 PCT hike: the last time I’d seen Shasta, I was in the Sky Lakes Wilderness in southern Oregon.

The hike along Hat Creek Rim was really enjoyable. The prickly vegetation and lack of water made me feel like I was back in the desert, but the views were impressive and the sunset was spectacular. 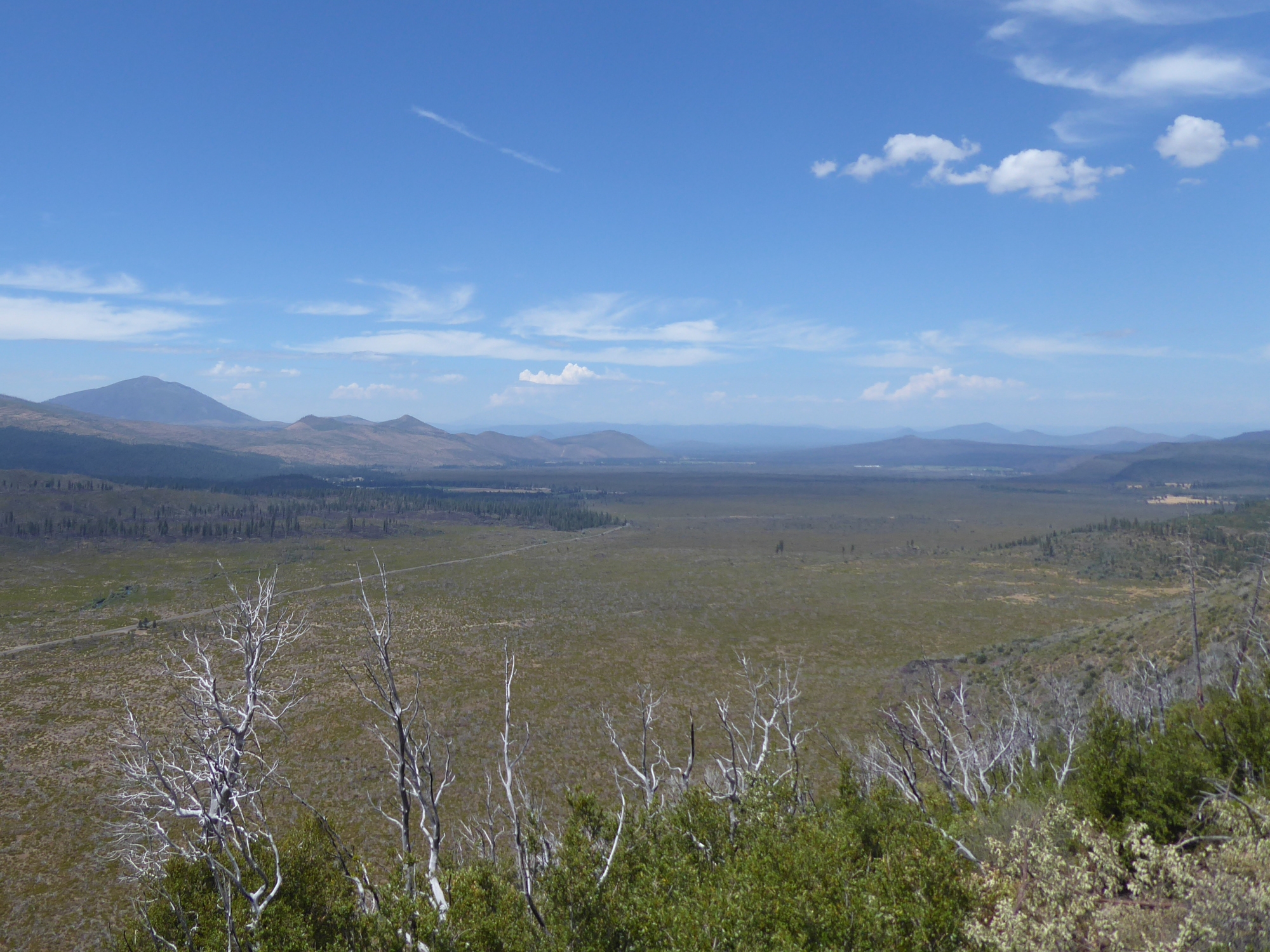 The view from Hat Creek Rim.

I stopped at the Cache 22 water tank the next morning to filter enough water for the rest of the day. The trail was rocky and slow-going in places, so I wasn’t as fast as the previous day, but still managed “10 before 10.” The temperature climbed rapidly, and by early afternoon, I really felt like I was back in the desert. Since there was very little shade, I had no reason to stop, and in fact, I sped up. I reached my intended campsite, near Baum Lake, soon after achieving “22 before 2.” Hitting arbitrary time-related milestones was starting to grow on me.

After a late start, a short hike, and an easy hitch, I arrived in Burney before the Blackberry Patch restaurant stopped serving breakfast. Resupply was next on my to-do list: Grocery Outlet, Dollar General, then Safeway. Not only did I buy enough food to get to Dunsmuir, I bought enough beer to guarantee that I’d have to get up several times during the night. The Shasta Pines Motel was much cheaper than my previous hotel, and its rooms were clean, comfortable and quiet. The manager, Jim, let me check-in early, and gave me a ride back to the trail the next morning.

Jim dropped me off shortly after nine, and a couple of hours later, I was gawping at Burney Falls. So were all the other tourists, of which there were plenty. After visiting the general store, while eating my ice cream, I remembered to check InciWeb. The McKinney fire-fighting effort was going surprisingly well. A huge area was still burning, but the fire was 40% contained just ten days after it started. There was the slight possibility, the faintest glimmer of hope, that I might finish at Ashland after all.

Returning to the PCT, I crossed Lake Britton Dam almost two miles later, and camped soon after that. It had been a nice, short, relaxing hike. It wasn’t a relaxing night.

I woke, just after 1:30 AM, to the sound of thunder. I was still quite groggy, but I remembered seeing a small hill to the south. It was unlikely I’d take a direct hit from lightning. Also, I was surrounded by trees. Very dry, highly flammable trees. In an instant, I was wide awake. I was essentially sleeping in a tinderbox.

I counted the seconds between each flash of light and the corresponding clap of thunder. Each bone-shakingly-loud clap of thunder. It took less than five seconds for the sound to arrive. The lightning was less than a mile away, and my heart started pounding at the realization. If I had to abandon my stuff and sprint back towards the dam, I was pretty confident I’d make it. There was no wind, and a small amount of rain, so conditions were favorable. I peeked out from under my rain-fly, scanning the horizon for an orange glow.

And that’s how I spent the next hour. As the storm moved away to the south, my adrenaline level gradually waned. Eventually, I drifted off to sleep, glad that luck seemed to be on my side. Lady Luck was just biding her time though. I’d eventually discover her latest plan just before I reached Dunsmuir. 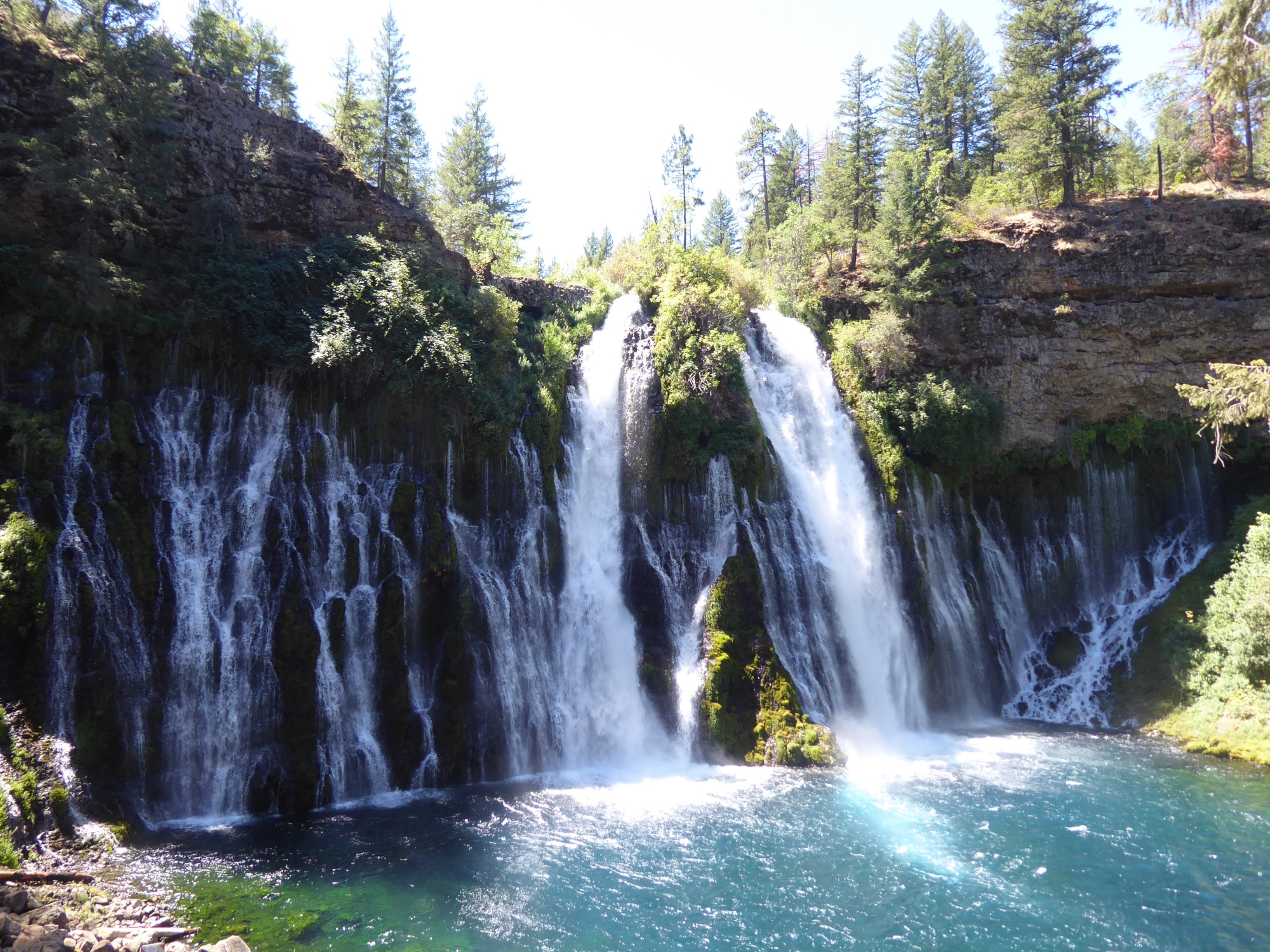