PCT thru-hiker Robert Campbell was found by a search team on Friday, October 18, after becoming lost in a snowstorm. He had taken shelter in a pit toilet at an unoccupied, unmanned campground and his sleeping bag, gear, and tent were soaked through. The forecast continued to call for heavy snow through the Cascades.

Campbell stated that he didn’t think he would have made it another night. “My sleeping bag and tent are just completely soaked and probably ruined and I have no dry clothes,” Campbell said from a motel Friday night. Campbell had struggled for several days after becoming disoriented on Wednesday night in the snow. The early-season storm made visibility challenging and footing treacherous. After becoming briefly trapped in a rock pile and without his GPS app functioning, he attempted to contact 911 but was unable to get the call through.

The Marion County Sheriff’s Office did send out a search and rescue team as Campbell found the campground and took shelter in the pit toilet. His footprints were found Friday afternoon by the search team.

Campbell has said he is going to continue his hike to Canada.

This rescue comes just several weeks after the PCTA announced an update to their permitting policies, which invalidate the PCT interagency permit (known as the “Golden Ticket”) if PCT thru-hikers flip-flop around the Sierra, regardless of snowpack or other potentially hazardous conditions. 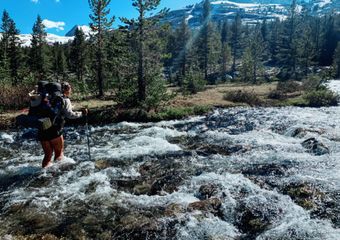 PCTA Releases Updated Permit Regulations, Including Continuous Travel Through the SierraAn October 1 update from the Pacific Crest Trail Association (PCTA) has made public several changes for 2020 PCT thru-hiker permits. There is now a limit on southbound permits. Permits for the number of SOBO thru-hikers—those who intend to start…Read More