In the interest of procrastinating several long-term projects and avoiding cleaning my house, here is a (mostly) comprehensive look at the rest of what I’ll be taking on the PCT.

The Big Stuff can be found below, with the notable exception that I’m swapping out the Big Agnes Tiger Wall 2 for the Hyperlite Mountain Gear Dirigo 2. Basically I packed my bag, walked around the house yelling about how heavy it was, and decided I couldn’t ignore the 10-ounce weight difference between the two shelters. Also note that I was informed: “You’re smart enough for a trekking pole shelter, you’re just too lazy to set them up.” 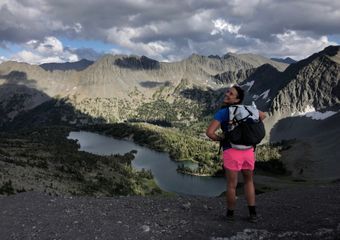 Maggie's PCT 2020 Gear List: Big ThreeHi guys. Maggie here, Managing Editor of this site, finally ready to hike the PCT. Five years go by fast—at this time in 2015, I was putting the finishing touches on a 35-pound pack load for the Appalachian Trail that…Read More

Absolutely no one asked how I pack my bag, but here you go.

Main Compartment: Tent, sleeping bag, sleeping pad, down jacket, rain jacket crammed in the pack. If the tent gets wet, it’ll go on the outside of a trash compactor liner.

Food Bag: Probably plopped at the top of the pack for easy access, or more toward the middle if it’s heavier.

Shoulder Pocket: This is an add-on from HMG and I’m a big fan. Phone, headphones, and snacks (!) go in here. It’s also detachable for wandering around town. 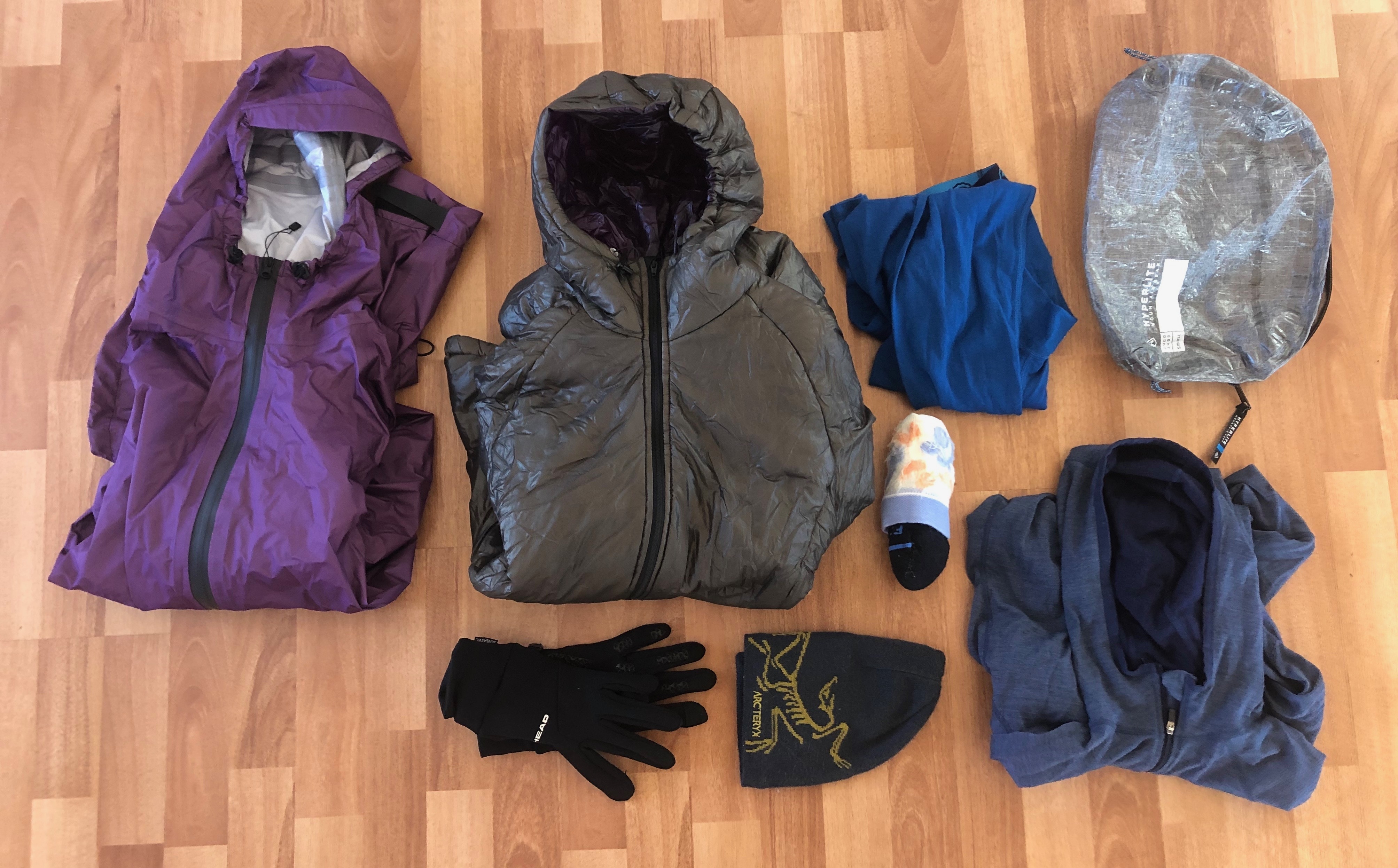 All clothes (base layers, spare socks, gloves, beanie) go in that Hyperlite bag except the EE puffy and raincoat.

I’ve been testing this jacket all season (review coming soon, I swear) and I love it. It’s a synthetic fill, weighs less than 8 ounces, and is as warm (and lighter) than my similarly styled down jackets.

EE killed it with the apparel, y’all. This rain jacket weighs 4.5 ounces, has super long pit zips, and a deep hood. I swapped this out from my other 8.5-ounce jacket and there is no performance disparity at all.

These pants…. oh my god. Never have I (a moderately proportional, occasionally athletic individual) ever looked worse than when I wear these leggings. But let’s make one thing clear: I am not trying to impress the hiking community with my fashion sense, and these are light, warm, packable, and odor-resistant. Somehow, the hoodie they came with (linked below) is my favorite merino base layer, and these pants are so unflattering. They were recently referred to as: “Saggy butt preschooler pants you’d see a kid wearing crying on the playground.”

Same company,  but somehow this top is my #1 base layer top. It fits perfectly, has a snug hood, and thumb holes. I’ll wear it at camp, and as a mid layer for hiking if it’s chilly. I brought a mid layer and camp clothes and town clothes on the AT, but this time I’m just bringing this merino base layer set.

I was gifted an Arc’Teryx beanie and I found some nice liner gloves in the lost and found. Carrying both beanie and gloves might be overkill to start, but as a few recent backcountry trips showed me, I am A Fragile Woman Who Hates Being Cold. 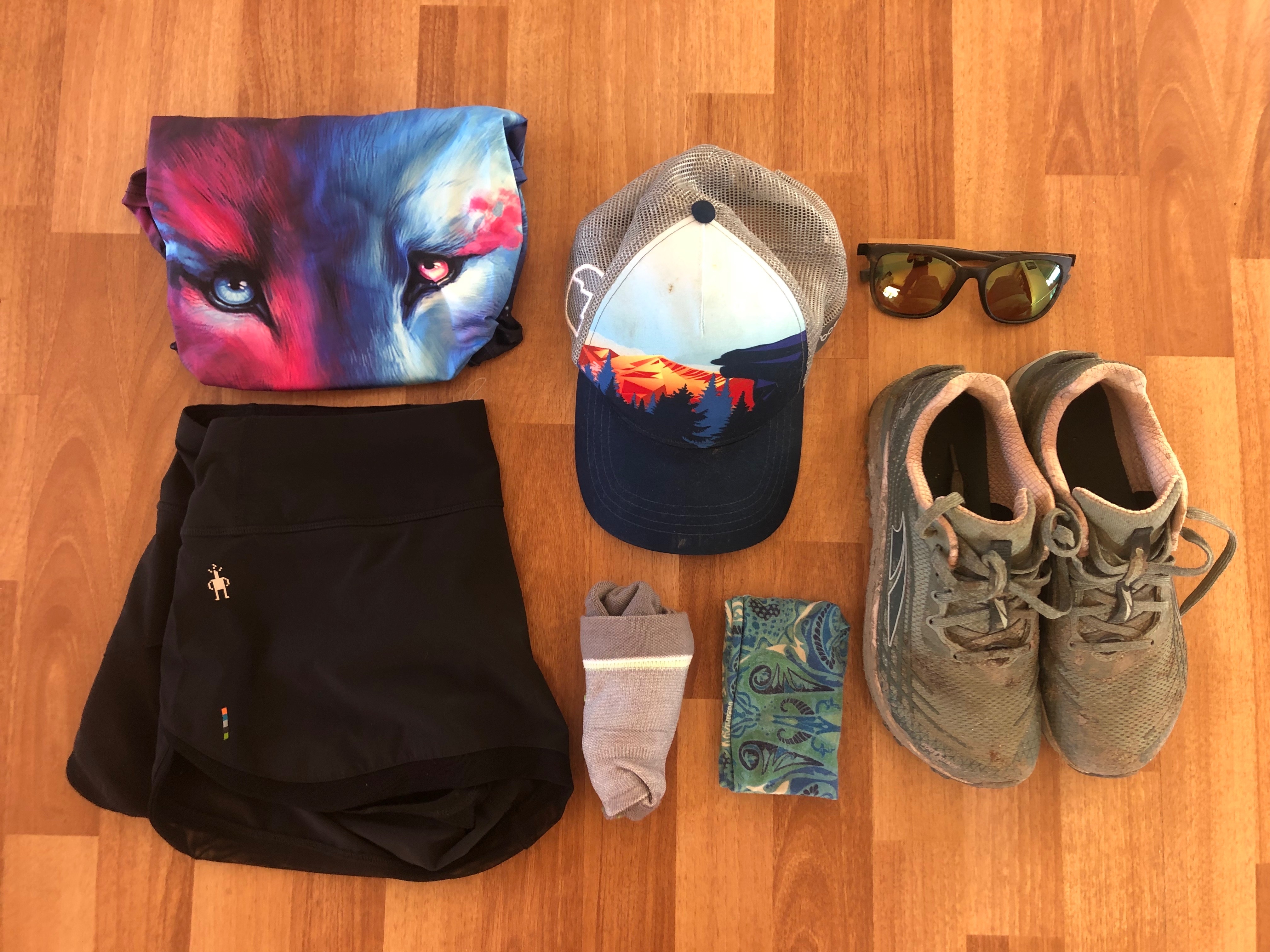 The shirt is fierce, the Buff is the same one I wore on the AT, and I’m amped on the Altra Timps.

I found these on sale and I had a gift card. Not attached to them, and sort of concerned the 3″ inseam is too short. #chafing

Also reviewing these. I was an Altra convert after the AT, and while there have been some discussions about the durability going downhill with certain models, I’m going to stick to what I know my feet like. I have a few more pairs to send to myself along the way, mostly Lone Peak 4s I got on major sale. I’m starting in the Timps, though, since I’ll be testing and reviewing them for the first few weeks out there. I wore them out of the box in the Grand Canyon a few weeks ago and they are fantastic.

These socks have a snug fit, don’t bunch, and stay up around my ankle. Swiftwick uses Olefin fiber in addition to merino, which adds to the moisture wicking. I like crew height socks not for the fashion statement (there is none) but to help prevent sand and debris from getting into my shoes. And no, I don’t wear gaiters.

I tried these on at Outdoor Retailer last month and fell in love with them. They’re high performance without looking geeky, and have enough coverage that I feel confident taking them to the desert. I’ve been running, hiking, and skate skiing with them, and  they don’t bounce at all. Plus, they’re comfortable to wear for long periods of time.

I have a metric buttload of Trek hats. I’ll take whichever one strikes my fancy at the moment. 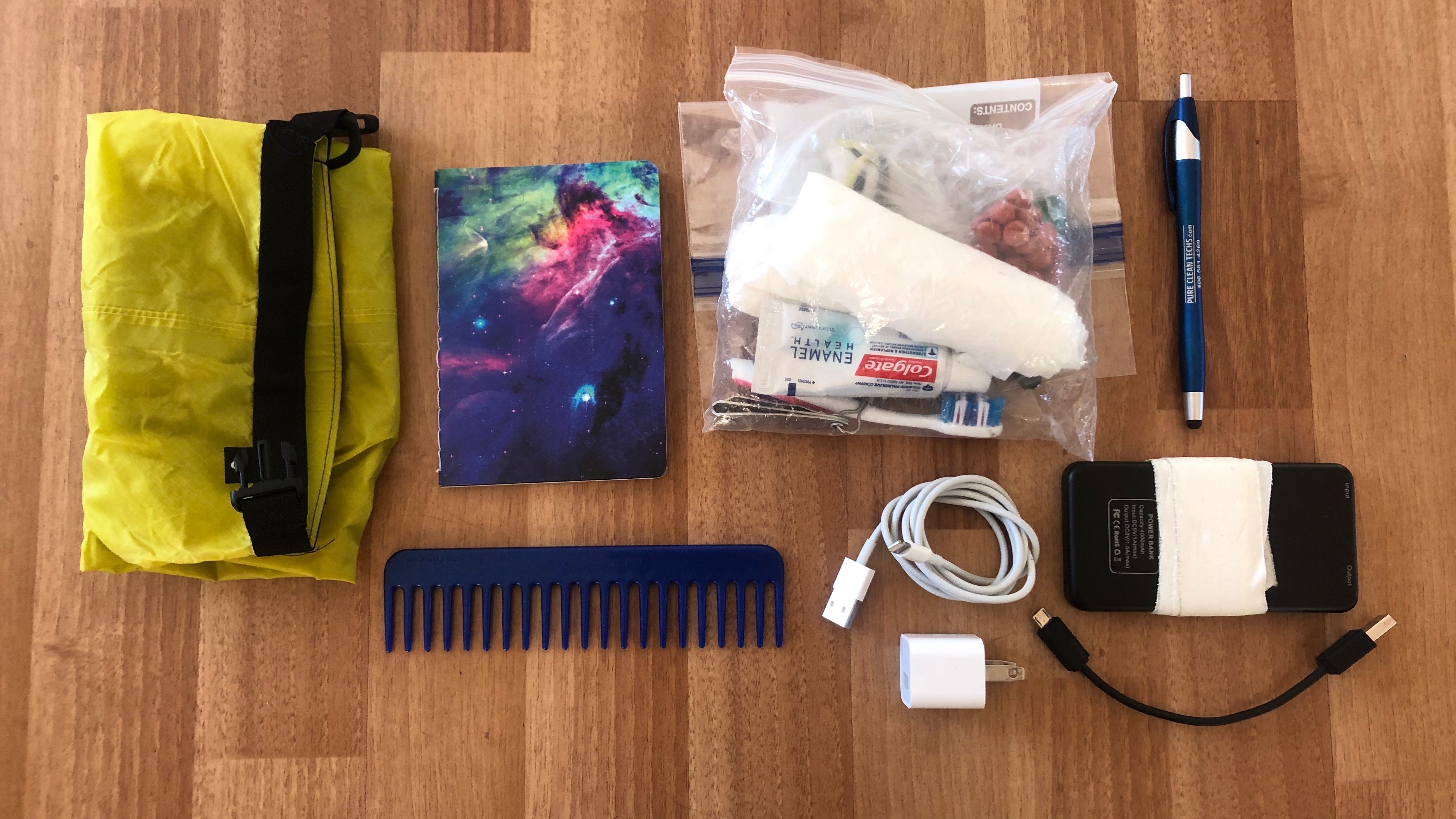 This isn’t kitchen stuff, but my photos didn’t match up to my categories. I’ll never be an ~*~influencer~*~ These are toiletries / things I don’t want to get wet. They go in that yellow dry bag. Comb, external battery, cords, small notebook, pen, ziplock with toothbrush, toothpaste, TP, Advil.

I have the Micro now, will probably grab a full-size Sawyer OG before I leave. Flow rate is better on the Original, and I’m not making the Sawyer Mini mistake again. I’ll carry two Smartwater bottles and also a spare Platypus reservoir for the desert. I’d like to have four liters of water capacity for longer stretches, and I’ll ditch the Platy after the desert.

That’s it… the rest of my kitchen. I’ll use this long boi to fish the scraps of tuna out of the packets. I don’t cook in the real world and I definitely don’t cook on the trail. 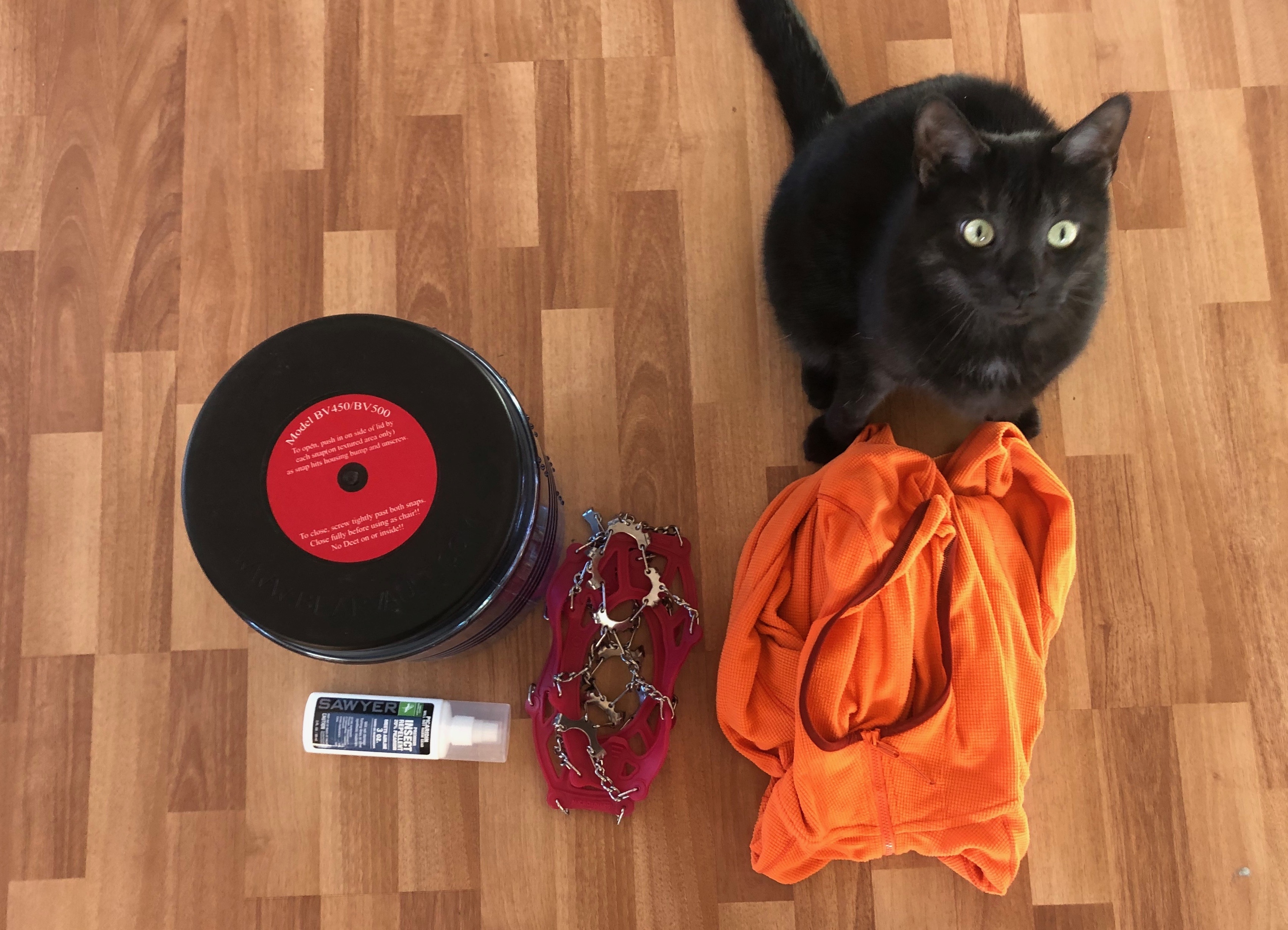 Does this look right? I feel like there should be more in this photo. Cat not included in Sierra Box.

Big guy for big amounts of food. Not amped to lug it around, but I’ve always wanted to carry a super bulky seat with me while I hike over snowy 10,000-foot passes.

I love this layer. Throwing it in my Sierra box in case I want another camp layer, but not sure if I’ll end up taking it.

The classics. I’ve worn them with Crocs before, so don’t tell me they’re not versatile.

This is actually one of the only things I don’t have yet. I was going to borrow my roommate’s, but might as well have my own for my bright future in mountaineering. Waiting on a fat REI dividend to make the purchase. 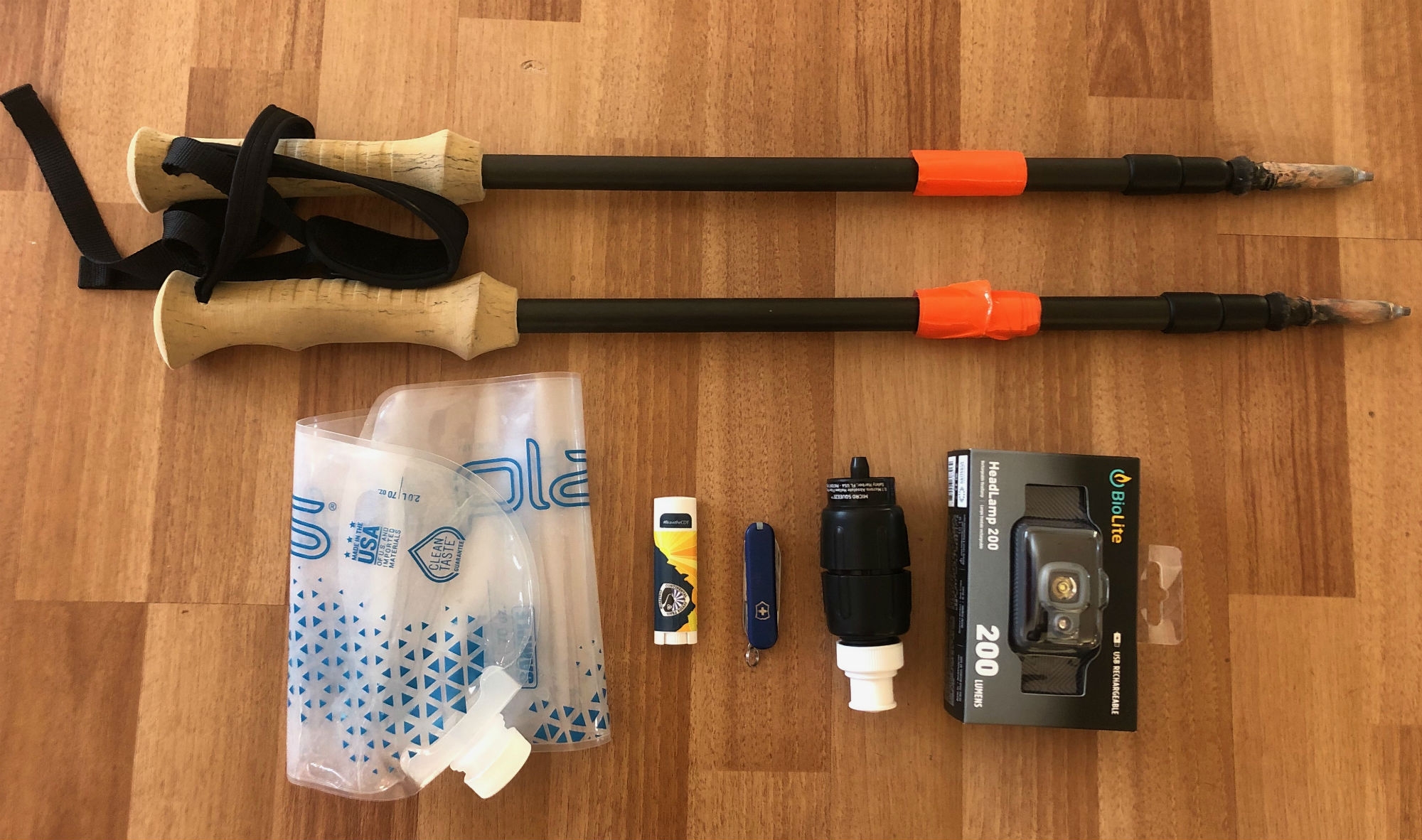 Filter, headlamp, JTree lip balm, and the smallest, most useless knife ever go in a hip belt pocket. Poles and reservoir because they fit into my “etc” photo.

These are lightweight and haven’t failed me yet. I wish they had a flick lock instead of a twist lock, but they’re super comfortable and weigh 10 ounces for the pair, 8 ounces more than my Black Diamond set. I have some duct tape wrapped around the poles to tape blisters and do field repairs.

I am death to headlamps. At one point I had four, then I had zero, now I have one. I’ve been on the fence about rechargeable models, but our reviewer loved this BioLite model. Ideally I would have gone with a 300+ lumen model, but I didn’t think of that because I am not perfect.

I had a meltdown a few months ago and impulse bought AirPods because I thought it would make me feel better about my life. Spoiler: it didn’t, and I will not be bringing them. Again… don’t want to worry about charging something else. Also I think Bluetooth kills phone batteries faster? External charger was a freebie from a media event. iPhone is from a few years ago, but works fine. I’ll be using it for Guthook, the Kindle app, for photos, and music.

I hosted some CDT buddies at my house this summer and they left this here. Mine now.

My parents are making me. 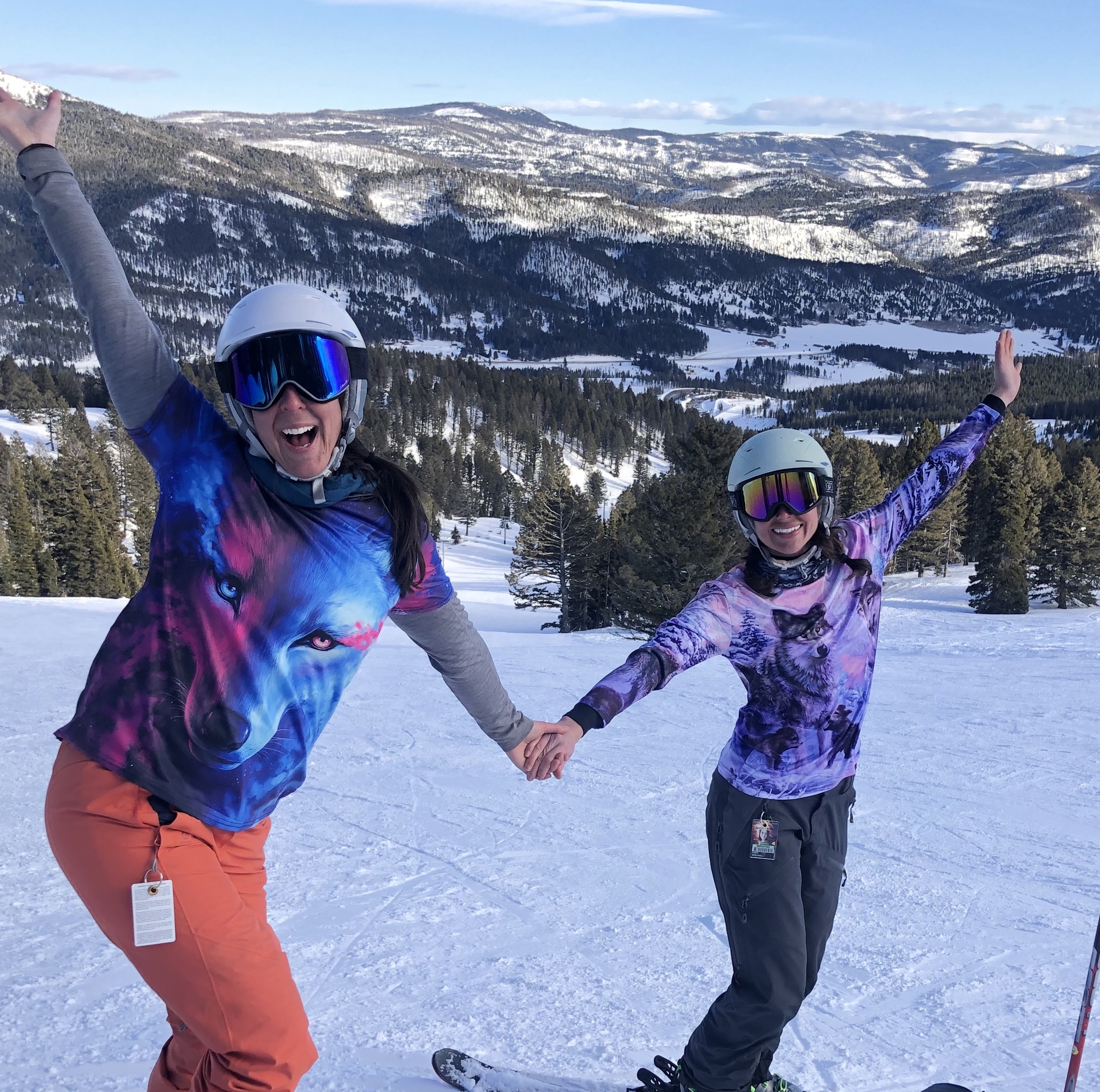