I don’t want to bash on the desert too much. It was amazing. I endured challenges such as heat and long dry stretches. There were struggles with motivation and personal resolve. But I met amazing people and saw incredible beauty. I learned to live very simply and appreciate the small things. I would absolutely hike those 700 beautiful miles again and encourage others to do the same. However, the Sierra Nevada are on a whole different level. 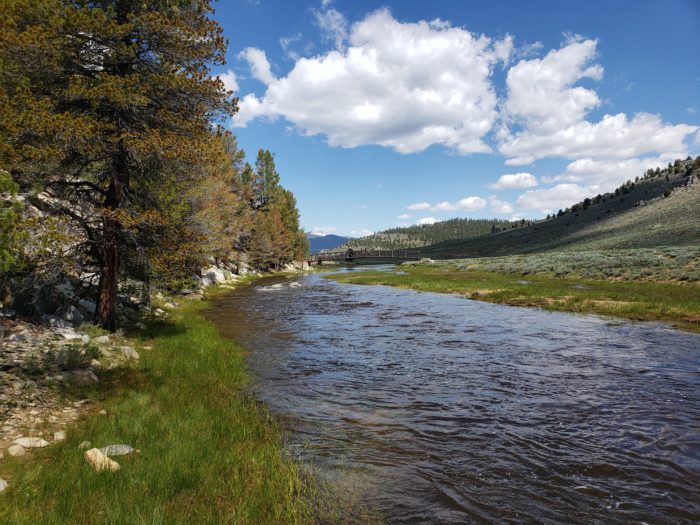 Like the desert, every day in the Sierra is different, and each has its own fresh challenges. After leaving Kennedy Meadows, it wasn’t long before I hit snow. I met a new group and we tackled the challenges that snow presents. Our pace was drastically reduced as we carefully made our way over snowy slopes and navigation became much more difficult as the trail was often buried. Water was more than plentiful as we crossed streams of snowmelt several times a mile. 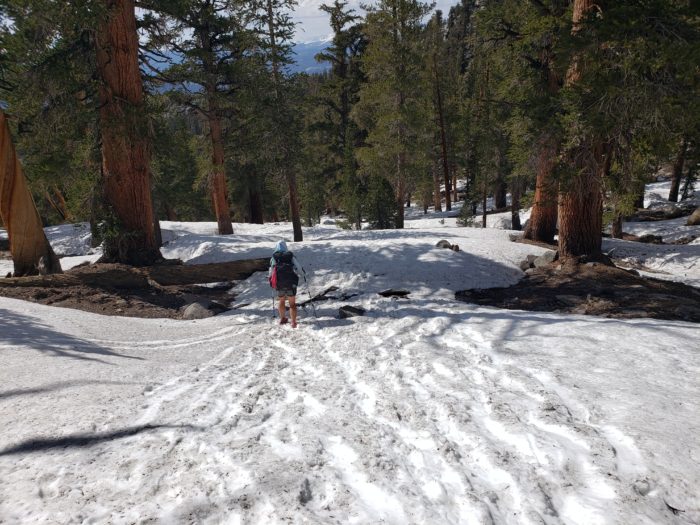 It wasn’t long before there was more snow than dirt under our feet and our pace slowed even more. Despite this, I was loving the new challenges. The views were incredible. Snowy peaks and endless meadows and forests dotted the landscape.

In the Sierra, traveling in a group is essential. A group took me in and I found an amazing trail family. EdBeard, Gin Gin, Judas, and Meatloaf became my close friends in just a few days. We stuck together, navigating the difficult terrain and supporting each other. We learned new skills together such as self-arresting with an ice axe and crossing fields of sun cups without breaking ankles. 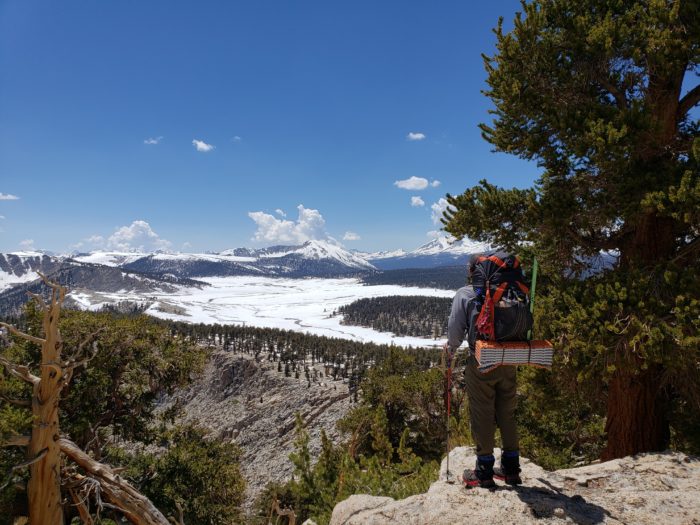 We made it to Crabtree Meadows at the base of Mount Whitney and began preparing to summit. This would be our greatest challenge so far. Even this close to the mountain, I was very unsure. I knew that it would be a massive endurance challenge and that it was a dangerous climb. Hikers have fallen on the steep slopes and the mountain had already claimed lives this year. I was going back and forth on whether to make the trek to the summit. I knew it would be a huge personal achievement as well as good practice for the upcoming stretch of trail. I woke up at 11 p.m. and made the decision to give it a try. I knew that if I got overwhelmed I could turn around.

We got started at midnight, knowing it would take a long time to cover the eight miles to the summit. Starting so early allowed us to hike over hard, frozen snow. The moon was almost full and the skies were clear. Eventually we reached the long series of switchbacks and began to really climb. No one in the group escaped the challenge of the altitude. We stopped to take frequent breaks and eat snacks when we could stomach them. As we climbed higher, traversing icy slopes, the temperature fell.

Many of the switchbacks were snow-covered but taking it slow kept us safe. We were nearing the top when the sun finally began to peek over the horizon. What an amazing sight to see. The sky turned incredible colors and revealed the truly amazing scenery around us. 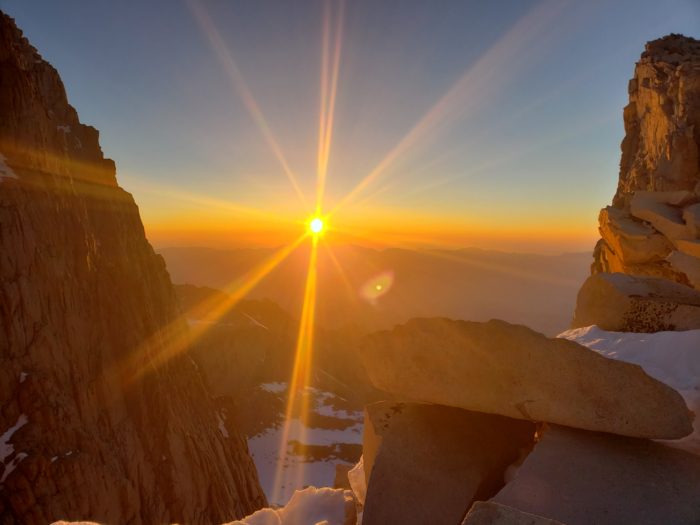 We reached the summit just after 6 a.m. The wind was howling, chilling us to the bone, but despite this we felt on top of the world. As I stood on top of the tallest peak in the Lower 48 states, I felt elated. A few hours before I had been unsure if I was capable of doing it. It made me feel like I could do anything. 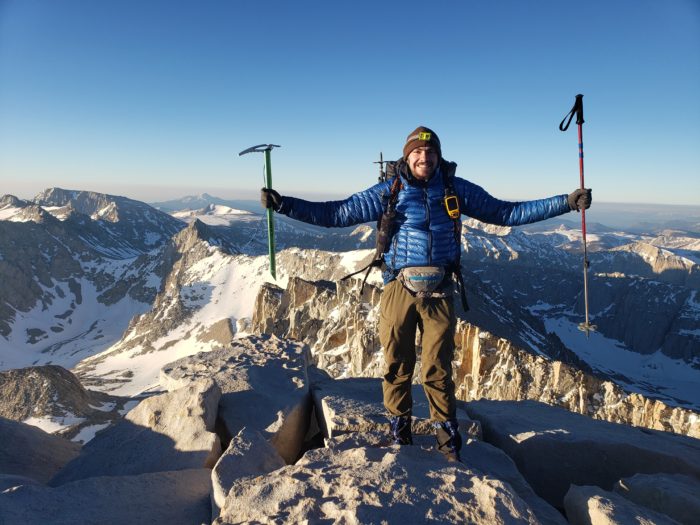 Our group got spread out on the way down, as cold and altitude sickness clouded our judgment. Thankfully we encountered no problems on the descent and made it back to camp, thoroughly exhausted.

On To Forester Pass

We woke up the next day and turned our attention to the next hurdle. Ahead of us was Forester Pass, the highest point on the PCT. Mount Whitney is technically a side trip as the PCT doesn’t actually go to the summit. We were all glad we had gotten the chance to practice our mountaineering skills on Whitney. On our way to the base of Forester, we encountered several rivers that we had to cross. Due to the massive snow year, the rivers were incredibly strong and we took great care to find safe places to ford the icy waters. After our third major river, we made camp and prepared for our ascent of Forester Pass. 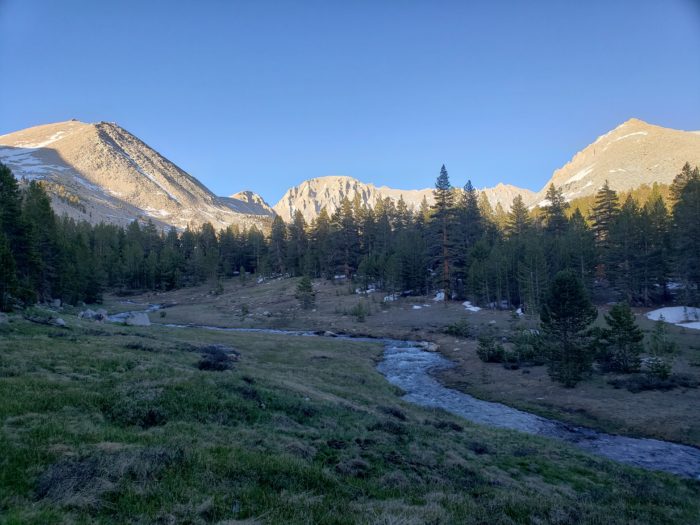 Similar to Mount Whitney, we woke up around midnight and began to hike. We crossed fields of sun cups, struggling to navigate in the darkness. It took us several hours to reach the base of the pass. Once we did, navigation for the first section was simple. We went straight up the mountain.

The path was simple enough to follow. There were decent footsteps in the snow leading us up but we still took it slow to avoid potentially fatal falls. Ice axes in hand, we slowly made our way up, eventually finding switchbacks. Looking backward, we could see groups of headlamps in the distance. Looking ahead was nothing but dark, snowy slopes. Many breaks were needed as we climbed. We fought off nausea and altitude sickness and forced ourselves to drink water and eat snacks. Breaks were essential but also made us very cold. 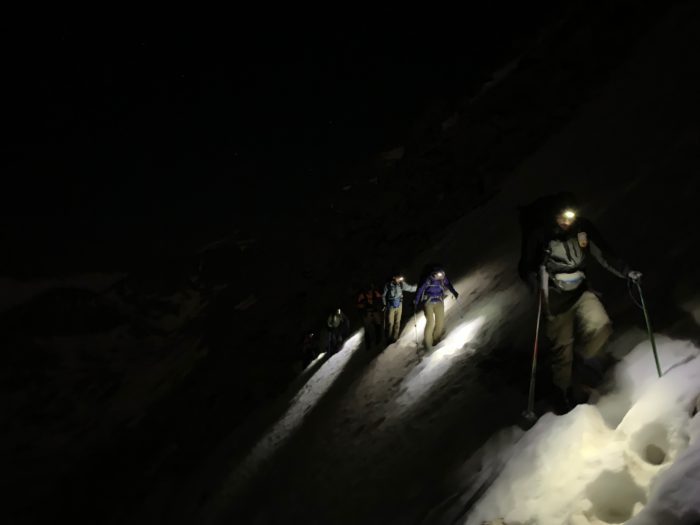 As we neared the top of the pass, one last hurdle remained. It was something that had literally given me nightmares. The trail crosses a chute of ice at the very top of the pass. While a very defined set of footprints exist across it, a slip and fall would almost certainly be deadly. Despite this I knew I had conquered Whitney the day before. I knew the top was minutes away. I was ready to tackle the finally challenge.

One by one I watched my group cross the ice chute safely. Finally, when it was my turn I crept forward steadily, keeping a firm grip on my ice axe. In no time, it was over.

We headed up the final switchback and one by one climbed over a wall of ice to the top of the pass. That moment will live with me forever. The sun was minutes from peeking over the mountains and the sky was illuminated with beautiful hues of orange and purple. 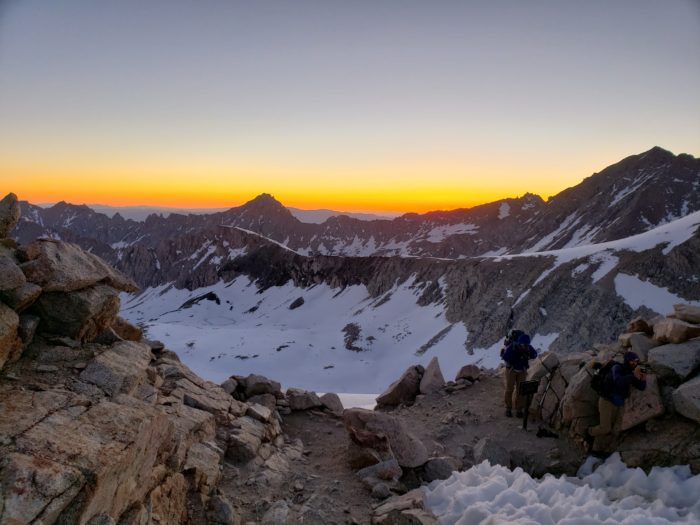 Summiting Mount Whitney was incredible but the elation that I felt at the top of Forester Pass was even better. It’s hard to believe that there is a place more beautiful than the top of that pass at sunrise. It was by far one of the most amazing experiences of my life. The fear and adrenaline I had crossing the ice chute gave way to pure joy as the sun peeked over the horizon. 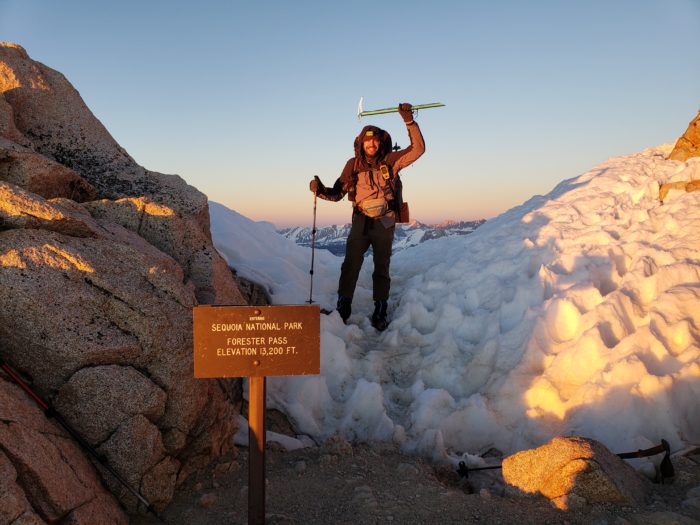 Soon it was time to descend from the 13,200-foot pass. We had accomplished a major milestone on the PCT. No other point on the trail reaches that elevation. The next day we would finally do Kearsarge Pass and head into town. There we had some serious decisions to make. The next stretch of the Sierra would be the most treacherous yet. Two of our group had already decided they would head to Washington and hike south.

Gin Gin, EdBeard, and I ended up heading to Mammoth Lakes where my family has a place that we could stay. From there we set about our own planning. We came to the decision that while we had thoroughly enjoyed the Sierra so far, we would head up north as well.

After a few days of rest, Gin Gin and EdBeard found a ride and headed out, bound for Washington. I stayed behind and waited for my family ,who would be spending July 4th in Mammoth. Getting to spend time with them was a gift. After some serious rest and relaxation with my family, I too headed to Washington.

My plan is to hike south until I reach the Sierra and where I left the trail. This is yet another example of how you must be flexible with your plans when hiking the PCT.