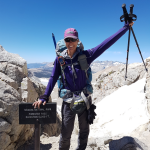 I started to write what I thought was a hugely insightful post about spirituality, visualization and intention, but the truth is I just wanted to see it with my own eyes. I wanted to see it and feel it: the Pacific Crest Trail.

We are currently parked in Vancouver, and I realized, back in September, that we were actually very close to Manning Park and the north end of the PCT. My husband, Tim, and I decided to hike in to the monument at the northern terminus. I didn’t expect seeing the end of the trail with my own eyes to be so powerful. Being there was one thing, but we also got to meet several people who were just finishing their trek. Inspired? I’d say so. It was so amazing to be there and be a part of it all. Tim took my picture at the monument, and although I felt unworthy of it, the other hikers made me feel so welcome and were actually excited for me. I put the picture up on my computer, so I could look at my goal over the long winter months. 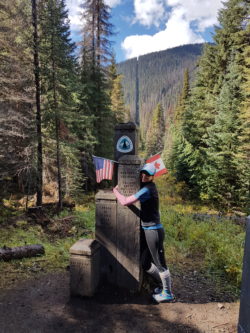 Then, out of the blue, I found myself on a plane to Los Angeles. It was an opportunity to visit my acting studio for a week, but I quickly realized it was also a chance to check out the trail. Ironically, we spent five months last winter in LA, but the PCT wasn’t on my radar yet. Now, I can’t believe how close we were. The universe, however, delivers everything at a time when we’re ready for it. (See how I snuck in the spirituality reference there?)

Agua Dulce…until now, just a name in Yogi’s Pacific Crest Trail Handbook and a possible resupply point. I had a rental car and time during the day, so the first chance I had, I drove to Agua Dulce and the Vasquez Rocks Natural Area Park. There, I was actually on the PCT. It was pretty exciting. I didn’t really count the hike to the northern terminus as being on the PCT, since we only hiked the section from the lodge to the monument, but this…this was the real deal in my books. I walked along the trail for as long as I could before I had to head to the studio. While I walked, I tried to imagine what it was going to be like to return here, only I knew I couldn’t imagine it. I can’t guess what the weather will be like, how long I’ll have been hiking, or how I will be feeling, and I liked that I didn’t know. 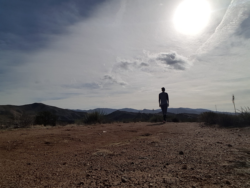 For the next few days I struggled with why I wanted to hike the PCT. In the studio, I was convinced that doing the thru-hike was just a big distraction from my true purpose in life, acting, and that it was a way to put that dream off a little longer. Then, when I was on the trail, I was convinced that the trail was part of my purpose, that I must follow this path. Back and forth I went, literally, from trail to studio, from dream to dream, constantly flip-flopping on what was the truth for me. But, in the end, I knew that if I didn’t at least go to Campo to see the southern terminus, I would regret it.

A Moment at the Monument

The drive took about 4 hours with morning LA traffic, but when I finally parked and started walking, I could see the monument ahead, and I started to shake and well up. It’s moments like this that make me believe that I must walk this path. Once at the monument, this time alone, I took some photos, while trying to imagine what it was going to be like in the spring. Again, I couldn’t imagine it, but I could already feel the fear and doubt mixing with the excitement. Would I make it back here? Would I be ready? Should I say goodbye to Tim here or far from here? Once I start, will I finish? All questions to be answered in time, as they come, in the moment. 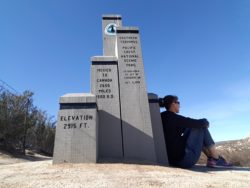 For now, I have these photos. I can look at them and know that when I next see the monuments, it will be the start and end of an unimaginable sure-to-be-amazing journey.

Side note: Tim and I were discussing the psychology of seeing the monuments before hiking the trail. I felt that it was inspirational, and he felt that if he’d seen them first that would be enough and he’d be less likely to take the journey in between. I’m curious how other people feel about this, so please leave a comment as to whether you would or wouldn’t want to see the start/end of the trail before actually doing it.

What 2020 PCT Hikers Need to Know I: Gear, Permits, and Getting to the Terminus

Pride is the Heaviest Thing You Don't Know You're Carrying

Hi! I hiked 200 miles of the Pacific Crest Trail in 2017 and 800 miles in 2018. I am currently making plans to continue in 2019 from where I left off in the southern Sierra. My favourite place to be is outside, either in the mountains or in the ocean. I am a scientist, writer, actor, traveller and sea turtle whisperer. I am also a student of the universe trying to find an answer to the ultimate question "Who am I...really?"