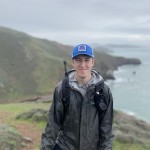 When it comes to the topic of gear, hikers generally fall into two groups: they either love it, spend their time reading about it, and want to talk about every little detail, including each item’s weight, multi-functionality, and the cottage manufacturer behind it…or they don’t. As you have probably guessed by now, I am a part of the former.

So on today’s installment of ‘Tommy prepares to live out of a backpack for 4+ months, I am going to cover gear; more specifically, the big four – because nobody wants to hear me rant about the benefits of a short-handled toothbrush. I will do my best to speak to my experiences with the gear, and how that informs my reasoning behind choosing it, but a rider amendment to this is that none of what I say should be taken as gospel. Gear is unique to your preferences, climate, and experience; so what works for me will not necessarily work for you.

Forgive me father, for I have sinned: I am writing about a piece of gear that I do not yet own. Good thing I’m not Catholic…

Choosing a pack for next year is something that I struggled with for a few months. I looked at a few different companies – Superior Wilderness Designs, LiteAF, Hyperlite Mountain Gear – but settled on the Kakwa for a few reasons. One of the unfortunate truths of the PCT is that your pack weight will vary wildly over the course of the trail due to several factors: water carries in the desert, bear can + long food carries in the Sierra, and the unpredictable nature of when the cold weather decides to hit Northern Washington. Additionally, during my trips this past summer I dealt with terrible shoulder pain due to my pack’s inability to carry a relatively light load efficiently. These two data points made weight-carrying ability my number one priority when choosing a pack for next year. During my research on packs, I found this review by Backpacking Light that compared the Kakwa with HMG Junction – a very popular pack on the PCT. Their analysis found that the Kakwa’s frame design resulted in less collapse of the pack’s torso than the Junction, resulting in better, continued load transfer and a more comfortable carry.

Beyond needing to carry some heavy stuff every now and then, I wanted a pack that had some element of waterproofing in the fabric to protect my gear. Late last year, I started seeing a new kind of laminate fabric called Ultra pop up and a few companies push out new products using it. Reviews of the fabric have been glowing – showing high levels of water resistance, abrasion resistance, and tensile strength –  and the Kakwa, thankfully, is made with it. Finally, I wanted something that had enough internal volume to carry a bear canister inside of the pack. The Kakwa has 41L of internal volume for a medium, and I have found this is a perfect amount of space for a bear can plus a few other larger pieces of gear.

Put all of this together and the Kakwa quickly emerged as the best pack choice for next year’s adventure. Stay tuned for the results of me actually acquiring the thing.

There is no way you guys could have seen this coming: I am using an Enlightened Equipment quilt for my PCT hike next year! Oh my god, I know right – so crazy! I am so different from every other hiker on the trail.

Okay, now that that’s out of the way – let’s get into it. I have had my Revelation quilt for a few years now and I have an emotional attachment to it that is somewhere on the spectrum between Gordy’s blue Chuckit ball and Lorelai Gilmore’s coffee. 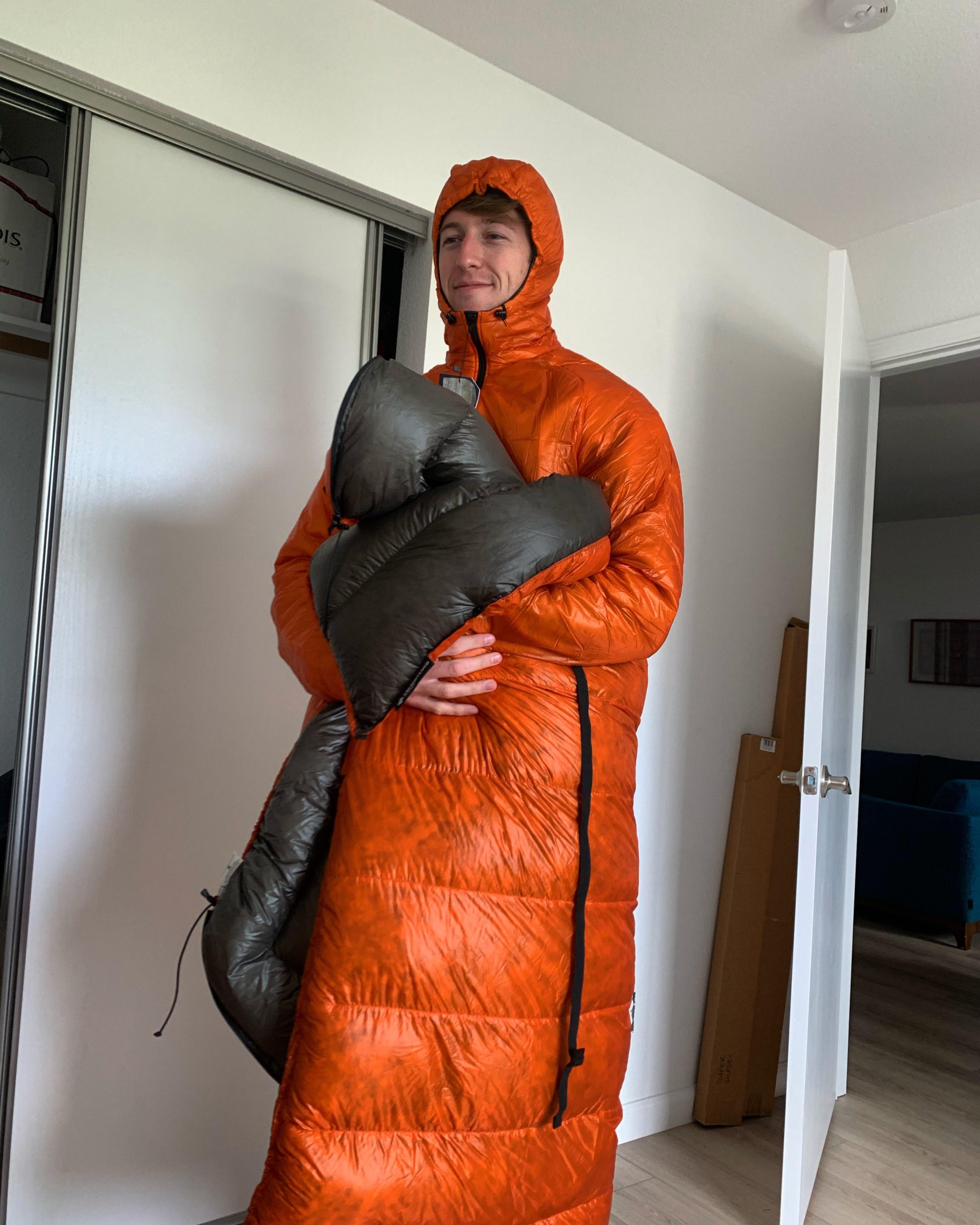 This was probably my easiest choice when deciding on gear for next year. Not only because of my experience with it but also because I am cheap and did not want to spend more money on gear for next year. In the few years I have had my Revelation quilt, it has kept me comfortable on nights as low as 27 and as high as 72. This is primarily due to its design. For those unfamiliar with quilts, imagine you have a sleeping bag and you cut off the back. It looks kind of like a blanket with a sewn-together place for your feet to go. Combine this with your insulating sleeping pad and you can be pretty comfortable even on cold nights. This open design – which is made even better by the Revelation’s zippered foot box – allows me to keep the quilt open and airy when it’s hot and cinch it down tightly around me whenever it’s cold. Throw in that it weighs 23 oz and you’ve got yourself a good piece of ultralight gear.

That’s right, I’m a closed-cell foam (CCF) boy. Now that you’ve let out your groan and prepared yourself to read another 20-something talk about how they can get a great night’s sleep on a piece of foam less than an inch thick, let me start by saying that I was not always a CCF kind of person. The switch to the Switchback (god I love alliteration) came earlier this year when I saw forecasted temperatures in the high 80s/low 90s for my thru-hike of the Tahoe Rim Trail.

See, the reason I am going with the Switchback for my PCT hike is that I am a back sleeper who is constantly overheating at night. Prior to using the Switchback, I was a NeoAir XLite guy; and while it is a great pad for colder nights, it has proven to be overkill for most summer nights in California. This is due to the XLite having an R-value – which is a measure of the pad’s insulating properties – that is much higher than CCF pads. Additionally, CCF pads offer the possibility of multiple use cases, such as a sit pad for a water break, a couch for a midday desert siesta, or a yoga mat on the off-chance I dust off the old hamstrings and downward dog my way into some flexibility.

As for the choice of the Nemo CCF pad over Thermarest’s popular CCF model, this came down to a preference for this pad’s ridge design. I find the gaps on the Thermarest pad a bit too big, and it really feels like you’re sleeping on a foam pad, whereas the Nemo is more tightly packed and is more comfortable for me.

Shelter: Gossamer Gear’s The One

I am running out of literary devices, so at risk of reusing one, I will do my best to keep this explanation brief. I purchased The One earlier this year and used it on my thru-hikes this summer in weather that was consistently mild. Like my quilt, I am using this shelter next year because I can’t be bothered to buy another piece of gear – especially one that I have not used before or will not have time to test well enough beforehand. Though the main two reasons that I chose this shelter are its price-to-weight ratio (otherwise known as ‘value’ for you literate folks) and its ease of setup.

I got The One on sale this year for a whopping $254 and the shelter itself weighs in at 18 oz. If you want a lighter shelter, you will need to go with a tarp or pay $300+ more dollars. There isn’t anything out there right now on the market that is a better deal than The One. Seeing as I prefer a full tent setup and, again, am cheap – the choice was easy. Additionally, this tent utilizes a two-trekking pole design to set up wherein your trekking poles replace the tent poles that most other tents utilize to create their structure. After a few practice pitches, I have found this design to be very intuitive, quick to set up, and easy to adjust to whatever conditions you find yourself in. 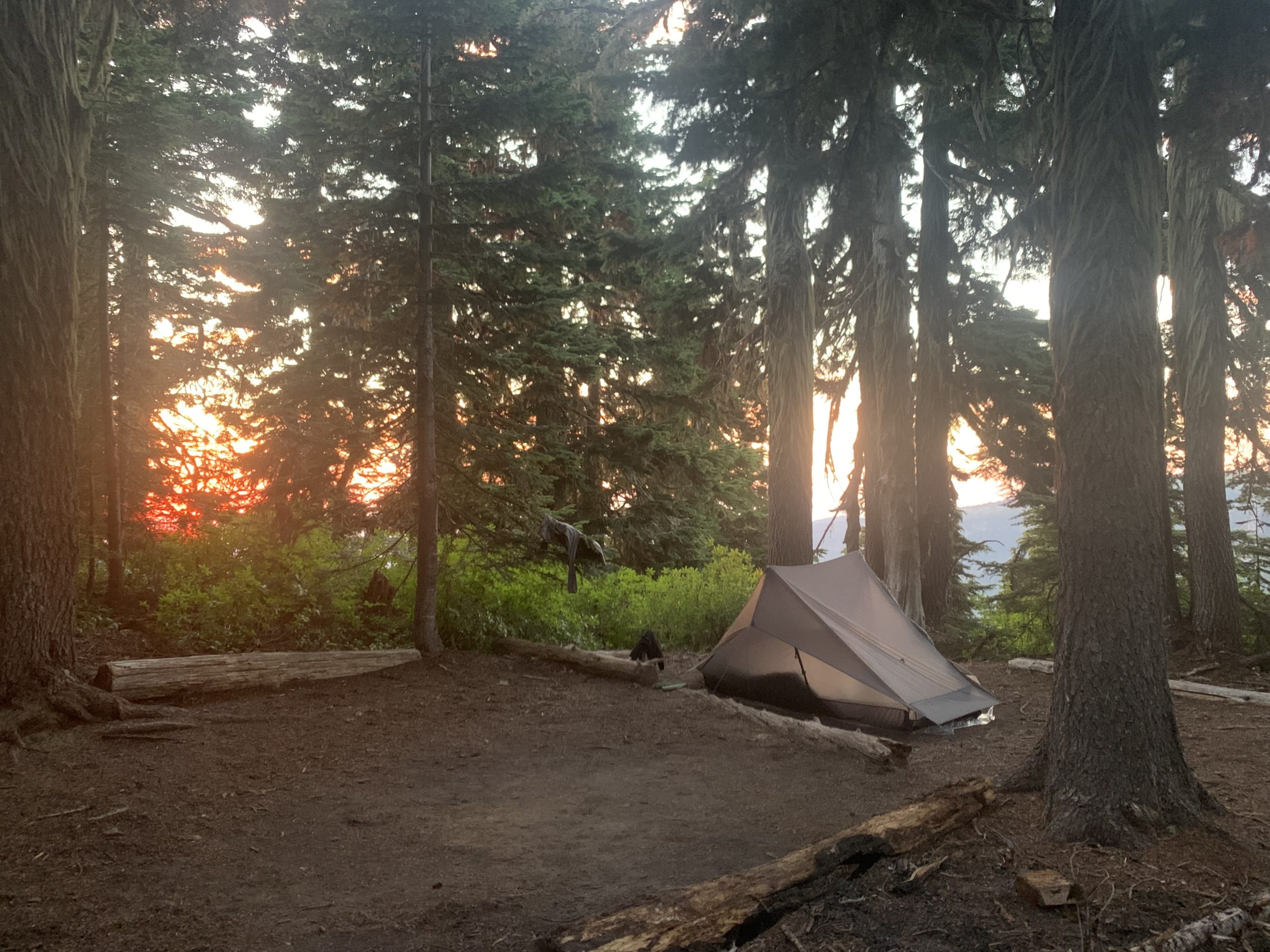 The main drawback of this shelter, from my experience, has not been due to its design but, rather, my own. As a taller individual (6’1 in my hiking shoes, nbd) I am able to lay comfortably in the tent without issue. However, when there is a great deal of condensation, the sloped walls of this tent’s design create a situation where I often wake up with condensation on my down quilt – which is, to put it lightly, a major bummer. Of course, there are plenty of ways to mitigate this, and I employ them regularly, but I am anxious to see how the tent will hold up in rain.

If you are looking for my full gear list, you can find it at this lighterpack link.

My name is Tommy and in 2023 I am thru-hiking the Pacific Crest Trail. I'm based in Northern California (Go Kings) and I like to write about hiking.