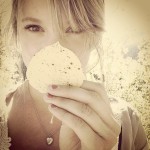 It was the Sunday before Easter in Salt Lake City. I was nearing the end of a hectic brunch shift at Pig and a Jelly Jar when I met my first trail angel.

She was sitting alone at the bar gazing out the window at Sunday’s busy sidewalks while finishing her biscuits and gravy. She looked both lonely and content. I don’t normally interact with tables that aren’t my own unless they try to flag me down but I had a strange impulse to approach this woman. I didn’t ignore it. Trying not to make things awkward, I started rolling silverware on the server stand next to the bar and waited a moment to ask how she was enjoying her breakfast.

She turned around and smiled. She was not an old woman though her hair was streaked silver. She had a kind face with laugh lines etched into the skin at the corner of her eyes. She was tidy and proper though she seemed comfortable and relaxed. I was glad to have approached her.

She told me she had been meaning to visit the restaurant for the last few months but didn’t know where to find it. She had been returning to the wells around the block to fill up gallons of clean water every weekend. That morning she had strayed from her normal route in a moment of absent-mindedness when she took a wrong turn and discovered we were just around the corner. She decided to come inside. Her words were honest and slow, as if I hadn’t interrupted her breakfast and were instead a friend who had joined her.

She told me the service had been excellent and wondered if I enjoyed working here. I thanked her and expressed that it has been a great job the last few months but that I would be taking off in about a week to hike the Pacific Crest Trail and wouldn’t be returning. Her smile grew wider and her eyes brighter though her speech stayed calm. She started asking questions about the trail. Would I be going alone? What would I eat out there? How long have I been planning? Glad to be talking about the trail with a curious and kind stranger, I answered all her questions one after another. She asked if I had ever done anything like this before and if I were nervous.

I told her about Te Araroa in New Zealand, how I had hiked for three months and how I had run out of money three quarters of the way through and had to hop off to find work in the vineyards of Canterbury. I told her I was nervous about not being able to finish but that not finishing would make a great excuse to get back out there some day. She stayed quiet and nodded her head.

At that moment a couple had left their table having had finished their breakfast. I thanked the kind woman for conversation and walked away to clear the table. She must have read my name tag because two minutes later I heard it called from across the restaurant. As I drew near she reached out to shake my hand. “Good luck on your trip,” she said as I grabbed hers. I opened my mouth to thank her when I realized she hadn’t been empty-handed.

I pulled back my arm in disbelief and saw a small wad of money pressed against my palm. I met her eyes with my mouth still open awkwardly and asked, “Are you sure?”. She laughed and said “Don’t run out of money this time,” and winked at me.

Still in shock, I walked back to the server station to see just how much shock was appropriate for this unexpected gift. I opened my hand and found she had slipped me $100. One hundred dollars from a customer who wasn’t even my own, from a stranger who barely knew my story, from a kind woman who wandered into the restaurant on accident, whom I had a funny impulse to go talk to.

I unveiled the generous donation to a co-worker and asked if I should even keep it. He assured me that of course I had to keep it but tells me that I have to give her a hug. Of course! I was in shock and too excitedly embarrassed to have thanked her appropriately in that moment but now of course I have to give her a hug. I slipped the money into my apron, approached her once more, and asked if I could have a hug. I was surprised that our embrace brought tears to both of our faces. “This means so much to me,” I told her. She hugged me again, set her tip on the table for her actual server, left me one last smile, and walked away.

I don’t even know her name. 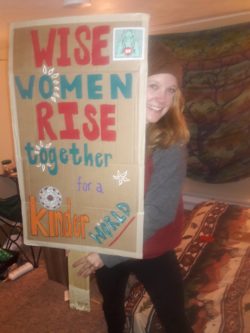 taken for the Women’s March but holds true for all acts of kindness.

Hey world, I'm Shaina. Southeast Michigan native. I showed up to my first adventure in the mountains with a suitcase and had no idea that people climbed rocks for fun until 2014. Since then I have gallivanted around the deserts of Utah as a wilderness therapy guide, trekked 2200km of Te Araroa in New Zealand, and have spent more nights under the stars than under a roof. I dabble in paints, poetry, live music, and portable instruments. Follow me and my love and our new harmonica on the trail this May. NOBO PCT 2017.