There are plenty of blogs, vlogs, Instagram feeds, and hiker war stories out there that highlight how awesome doing a long-distance hike can be. Everyone has amazing stories and pictures of mountaintops, wild animals, crazy townspeople, funky bars, and beautiful sunsets. Everyone says they had a great time, would do it again, and regretted nothing. I’d like to share five bad days I had last year. Maybe some of these will happen to you, and maybe these stories will help.

My goal here is to show, as a counterpoint, that not every day is perfect, not every day CAN be perfect, and that’s OK. You have to accept that when you’re traveling and basically on vacation for five months, surely not every day is going to be Instagram and barroom story perfect.  There are some common themes—hitting physical limits, real life happens, injuries happen, weather happens.   How you choose to deal with those issues can dramatically affect your outlook, even whether you finish what you’ve set out to accomplish. 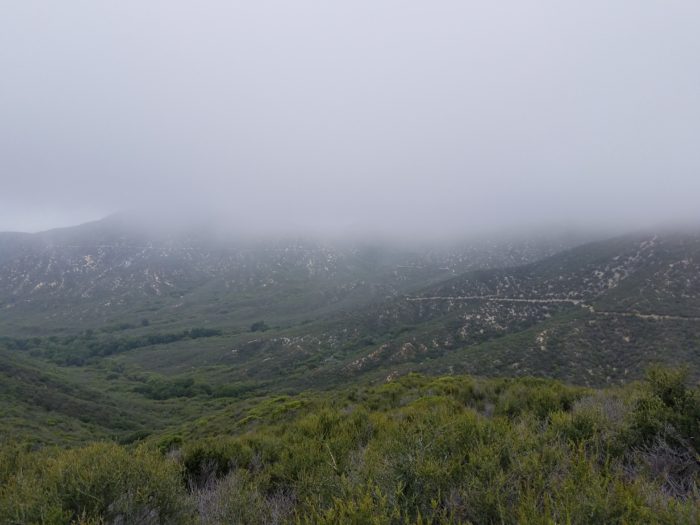 We left Agua Dulce after a full 24-hour zero, which we all needed. One month in, most of the blisters had healed, the joint pain was not yet a factor, but the first stages of the physical grind were starting to manifest.  Some of the initial excitement, the “Wow, I’m hiking the PCT” factor, had worn off, and we were starting to realize “this is my life now.” One month in, and we still had 2,200 miles to go!

Midafternoon, we finally got on the road, struggling under the weight of five-and-a-half days of food, along with water for a possible dry camp (only water source reportedly muddy and/or bee-infested). The path out of Agua Dulce is a road walk, and uphill.   Once you get off the road, it’s a long, winding canyon climb, more uphill. Weather was coming in, so we hiked up into the fog, and the temperature dropped—nothing worse than fall in New England, but things got gloomy. I remember writing, “Fuck this shit” in the trail register as we entered the canyon.

By soldiering on, and sticking with my trail family.  Climbing up into the weather was starting to freak some people out.  I think having someone with experience in that kind of situation (me) helped calm some nerves and let us progress as a group. 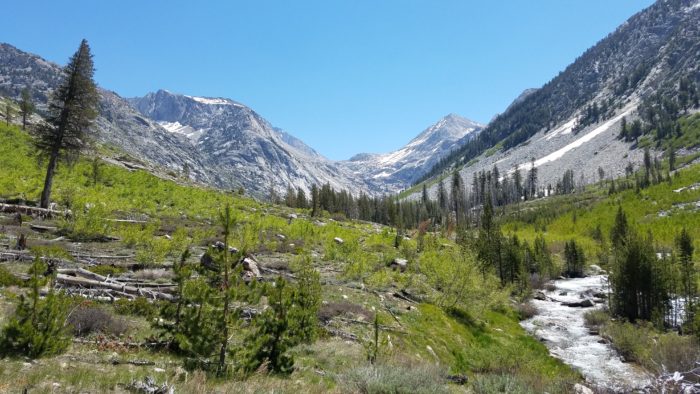 We camped at about 11,000 feet the night before, and were up before dawn to head up Mather Pass. I’m chalking this bad day up to chronic food and oxygen deprivation. Mather was amazing, one of the best campsites we had, but getting up and over it took more out of me than I thought.  By midday I was completely fried. Plodding, only just summoning the energy to put just one foot in front of the other, I was even letting my trekking poles drag in the dirt.

I began to hate hiking. I kept asking myself, “Why am I doing this?” I even resented the incredible trail work – why did they put a water bar here, and not there?   Why was a rock step slightly too tall to be comfortable? Plus, my feet were starting to hurt, my arches and ankles finally buckling under the effort to rock-hop across fragile terrain.

Of course, the day ended perfectly, with a long walk through beautiful pine woods of Evolution Valley—a big but easy ford, and a great campfire with friends.  Knowing that I’d end the day that way probably would have helped, but at the time I hated everything.

Lack of sleep, lack of calories, and high altitude. It was also really hot down in the valley, with no shade.

A thru-hike is a physical grind; sometimes you have to just put your head down and do it.  I was lucky to have friends waiting for me, to pick me up mentally and physically.   Even though I was always dragging at the rear, they waited for me, which was an instant morale boost.  Fireball even offered to make me some electrolyte water and food.

For some hikers, managing what’s going on at home is another challenge. Most of the youngbloods I hiked with had no family ties other than occasionally calling Mom or arranging with a sibling to send mail drops. The older hikers, myself included, had to try to manage home life from thousands of miles way. Those of us with other worries had to manage financial things like mortgage payments and health insurance, but also a lot of practical chores—times when the lawnmower wouldn’t start, the inspection on a car expired, or a pet became critically ill. Or when all those things happened at once, and your spouse was simply overworked.  One of the things it’s easy to lose sight of is how much work is left to do by the people who stay home, without whom your six-month adventure wouldn’t be possible.

It was a brutally hot day in NorCal when I got a pretty serious text from my wife. There were too many things going on at home, and they were things we hadn’t really planned for. Lack of planning had brought events to a bit of a head, naturally all at once.   Seeing the text, then not having cell service, then spending the rest of the day trying to find service to call home was nerve-racking. Things did not improve when I was able to call home. Eventually we worked out a plan to deal with the stuff going on, but it was a real struggle.

The bad vibe continued for a long time, with a shadow cast across the trail as I struggled with being out there—was I a bad spouse? Was I being fair by taking the summer off? Were we setting ourselves up for more failures due to lack of planning on my part? What could I have done differently?

Lack of planning for some eventualities, combined with too much work for one person. Probably a culmination of a handful of things all coming together at once. Those who stay behind have a LOT on their plates.

Perseverance, and a great deal of support from my family. We eventually sorted things out, but it took a lot of work to keep things running smoothly. 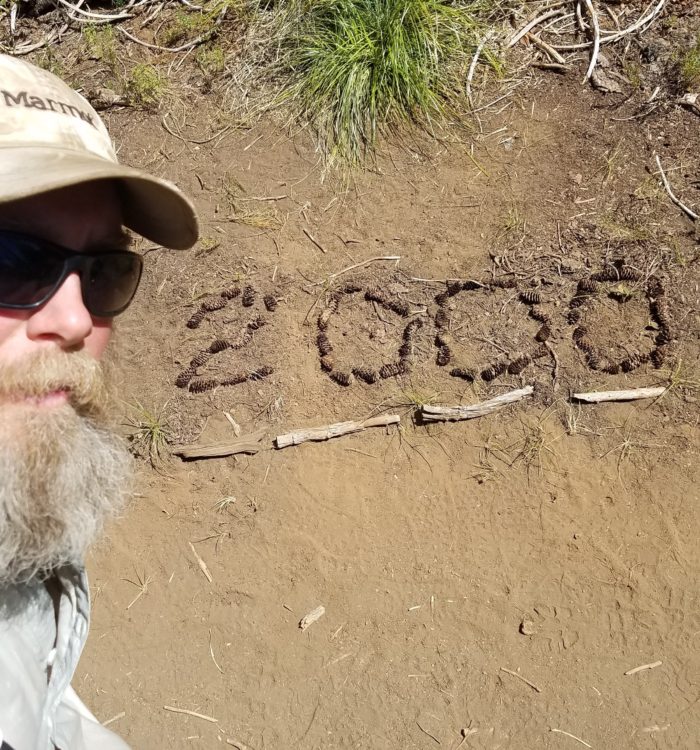 This one’s for you, Nic.

On a too-hot-to-hike day in Oregon, when I kept passing hikers taking siestas along the trail midday, I got some much-feared news from home. A good friend from college had passed away after a long battle with cancer. Talk about a punch in the guts. I hadn’t seen her in too long, and now she was gone.

Along with terrible news, it was not hiking weather. I so hot and miserable after the call, that it was the one time I wished for a hike-ending injury to just happen.  A sort of “take from me this cup” moment. I should have stopped, camped, drank water, and processed.  However, I was skosh food and water, and needing to make miles. Plus at the time I also realized that nothing was going to change if I stopped hiking.

Horrible news from home, temperatures over 100F, and an unwillingness to make rational decisions about healthy hiking (probably due to dehydration and mental stress).

Drank a ton of water and kept moving, albeit at a slower pace.  Spent a lot of time thinking about my friend, and the things we had done together way back in school.  I thought about her and her family for a long while, and realized that things like blisters and dehydration and sore feet are meaningless compared to a much darker road that some people have to walk. 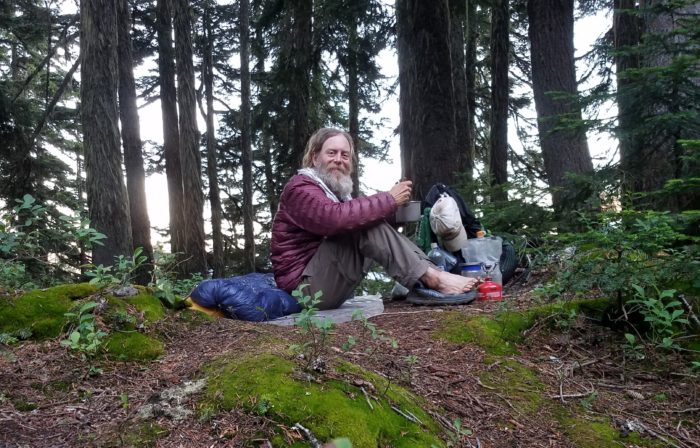 The night we left Stevens Pass I decided to cowboy camp, to squeeze one last au natural experience before the Washington weather closed in for good. It was cool, but there was a brisk wind and the skies were clear. Fast forward to 4 a.m., with temps down in the 30s, and the rain rolled in. I managed to get up and scramble my quilt into my Nylofume pack liner safely. Then, under the umbrella, which many hikers mocked as too heavy, I was able to pack everything else while keeping it dry. In the pitch black and drizzle, I put together something for breakfast, bagels probably.

I had the pleasure of scrambling down a scree hill looking for a place to dig with my trowel. Not wanting to walk exposed ridges in the rain under headlamp, I waited for daylight. Squatting under my umbrella, rocking in place to keep warm, I even dozed a little.

Mostly bad luck mixed with an overestimation of my skills—both of which can happen to anyone. After four-plus months I felt like I had a good read on the weather, but was wrong.

Having good gear, knowing how to use it, but also just trusting myself and my experience. I was dry, my gear was dry, and I knew day was coming. I also knew the weather wasn’t getting worse. It was just a waiting game. It worked out in the end, and I had beautiful dawn views of the rain clouds breaking up. 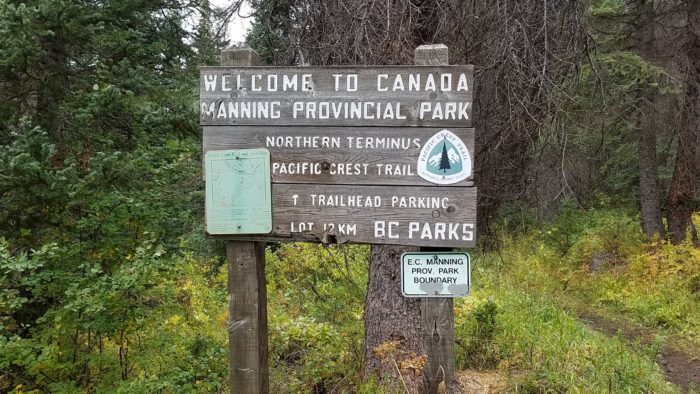 I said there were five bad days, but the sixth and last was the day I finished. I had been able to sit back and rely on the PCT to provide a sense of purpose for the last five months; now that was gone. I had to go back to being a real person, with real problems, things that taking a five-month vacation couldn’t and didn’t fix. Nothing would ever be the same.

I was both ready to be done, and ready to start again. Some people yo-yo the trail; if I didn’t have adult chores to take care of, I might have done that.  After a couple of burgers at Manning Park, of course.

What was your worst day and how did you overcome it?

Using Art to Stay Connected to Trails While Social Distancing