After a month of blistered feet on the PCT, I somehow sweetened the deal with a skin infection. Here’s what happened and how it feels to be temporarily sidelined in Los Angeles.

What Not to Do

The blisters I had were healing, but still needed to be taped up during the day while I was hiking. I was using Leukotape, a favorite among hikers for its durability and long-lasting adhesive. I’ve met people who wore Leukotape for as long as a week, or up to 100 miles. I’d worn it several times two days in a row, without a problem.

Roy and I met up in Big Bear, Calif., and we were hiking together when we got to Deep Creek Hot Springs at mile 307.9. We’d planned to arrive early in the morning and soak for a few hours, so I’d gotten lazy and left the tape on my blisters for a second consecutive night. When I got to the hot springs and removed all the tape, I had a rash everywhere the tape had been. I assumed it was a heat rash, ignored it, and soaked in the springs with Roy for at least three hours. It was awesome, we met cool people, and our joints felt better afterward. I’d still recommend it, as long as you don’t have any open wounds. I heard later that this spring is notorious for being dirty, but I haven’t met any other 2018 hikers who specifically had any problems.

After an hour or two drying my feet in the sun, I taped them up and hiked ten miles. I hiked another ten miles the next day before realizing the rash was escalating, and that the entire top of my foot had begun to blister. Over the following two days, I hiked about 40 miles into Wrightwood, wearing as little tape as possible, and changing socks every four hours. By the time I made it to town, my feet were increasingly itchy and I realized they’d begun to swell. 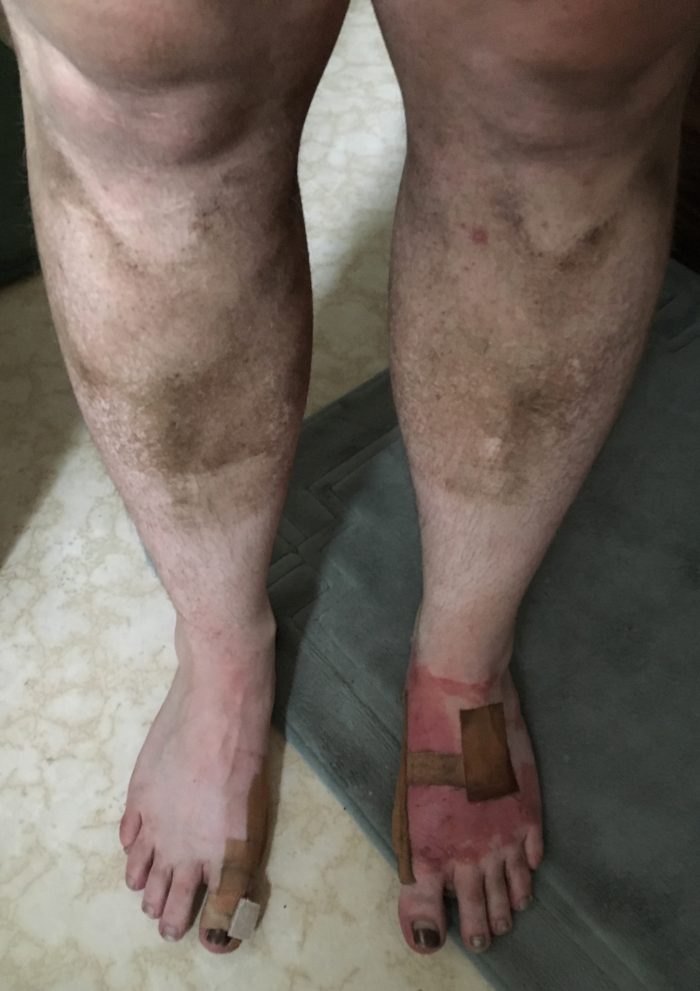 Dirty legs and rashy feet, two days into the infection symptoms. It got much worse after this.

I stayed with wonderful trail angels Diane and Leroy Jennings in Wrightwood, and Diane took me to a clinic. I learned that I’d gotten  some nondescript bacteria in the fresh rash at the hot springs, causing an infection. One foot was entirely encased in the infected rash, and the other foot was only minorly effected. The infection was symptomatic of a burn, and was continuing to blister. The doctor prescribed a topical burn cream and put me on antibiotics.

The rash, itching, swelling, blistering, and pain continued to intensify over the next few days. Diane eventually took me back to the clinic, where another doctor prescribed a second antibiotic and a burn dressing regimen for nighttime. The new doctor told me to be patient and that infections don’t have rules. Each day, I was inching closer and closer to nonambulatory. 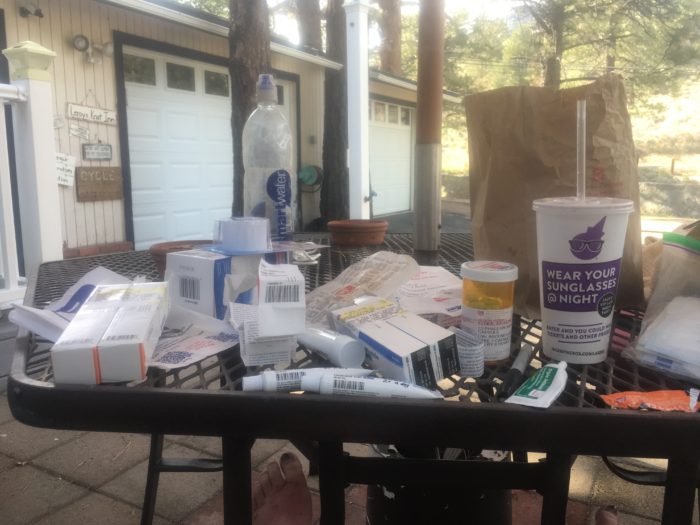 My haul after the first trip to the pharmacy (and Jack In The Box).

Roy was around off and on for several days. He was incredibly kind and helpful, finding me ice packs and ordering us pizza. At some point in my first week off-trail, Roy decided that his time on the PCT was over, and that he was ready to go home to Tennessee. I was initially stunned when he broke the news, because I hadn’t seen it coming. My hiking partner was leaving, but for good this time. But Roy and I support our individual choices, and I was proud of him for doing what he needed to do. I didn’t want to see him go, but it was really nice getting to spend a few extra days together before he flew home. He let me rummage through his gear and first aid supplies, we went out to eat together one last time, and had a few final heart-to-hearts on Diane and Leroy’s back porch. We talked about visiting each other after the trail, and I watched in a surreal stupor as he rode away to the airport. I’m sure we’ll see each other again. Love ya, bud.

Since I’d have my feet up for the foreseeable future, I went to Los Angeles to visit my friend Remy. I’ve been here a few days, watching Netflix and sleeping on Remy’s pullout couch. Ten days after the hot spring, my feet finally started showing signs of healing. I still cannot walk, but I’m hoping that comes soon. 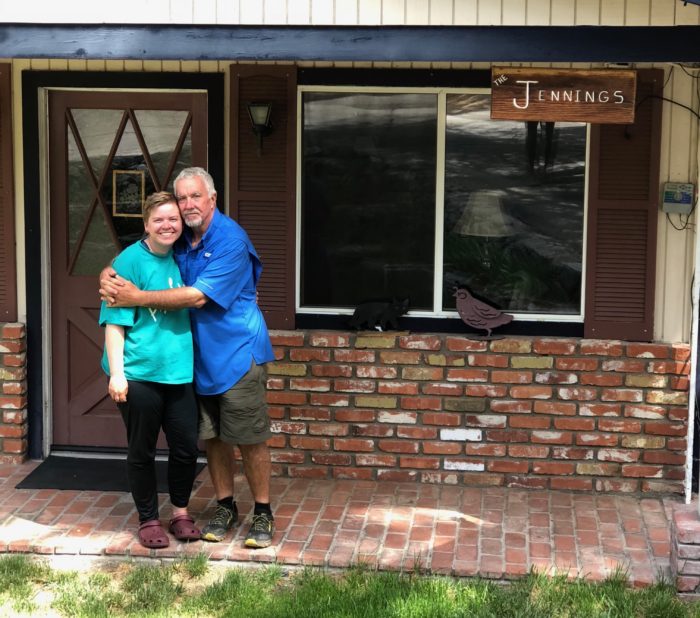 Roy and me just before he left for home.

Being off-trail for so long has given me time to think and feel a lot of different ways. Early on, I almost felt guilty about how much I enjoyed sitting inside with Roy all day watching TV and sleeping in. Today, I’m sitting on Remy’s deck staring toward the mountains and the trail somewhere in the cloudy distance, wondering how long it’ll be until my foot fits in my shoe.

Waiting on my feet is frustrating because otherwise I feel perfectly strong and able. I was on the cusp of averaging 20-mile days, and now I’m barely standing long enough to shower. I’m nervous and curious about what my pace will be like when I eventually get back on trail. The skin is likely going to continue to peel around one entire foot, and they’re both very sensitive to heat. I lie around planning potential bandage and sock strategies, and trying not to do too much math about pace and timing.

I’m grateful to the people who’ve helped me along the way. Diane and Leroy have been taking in hikers in Wrightwood for 30 years. They were generous and benevolent, just because they enjoy being of service to people in need. My new friend Charlie drove me to LA, and Remy and his roommate look after me like a sick child.

I’m thankful that it’s still early in the hiking season. Knowing that hikers are still leaving the Southern Terminus daily has been really comforting. All my friends and people I’d been hiking with are now more than 100 miles ahead of me. The longer I’m laid up, the more I lower my chances of ever catching them. Some of them have suggested I skip ahead and meet up with everyone farther north, when I’m ready. But they’ve been getting stronger as I’ve been sitting still, so I’m not even sure I’ll be able to keep up with them right away. It might be disappointing to skip substantial miles and still lose everyone all over again.

So far, I feel OK. Being forced off trail feels strange, especially this early on, and especially for something as seemingly trivial as a skin infection. If the infection wasn’t on my feet, I’d probably still be hiking. Instead, I’m sitting in LA, waiting patiently, still unable to estimate when I’ll be back on trail. I’m not worried about jeopardizing the hike yet, and I refuse to consider going home over this, although Diane definitely suggested it.

For now, I’m rolling with the punches. I’m resting while I have the chance, and I’m glad for the time with Remy. I’m ready and eager to be on trail, to summit Mt. Baden-Powell, to slowly catch up to my friends while meeting new people along the way. For some reason, this trail keeps handing out new challenges and ass-kickings, and for some reason I keep coming back for more. 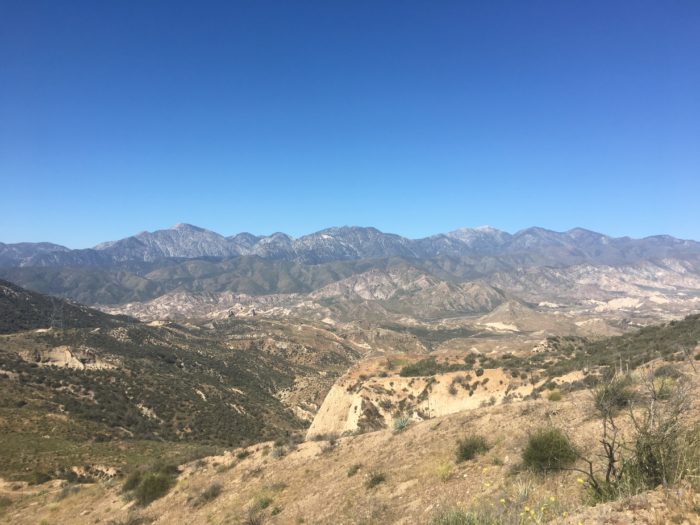