Running: it’s a lot like walking, except you get there quicker. If you’re thinking about training in preparation for the PCT, I’d recommend you start running several times a week. You’ll use many of the same muscles for backpacking, but each training session will take half the time, compared to walking.

Yes, you could just use the first few weeks of your thru-hike to get up to speed. But imagine all the climbs you’ll endure, rather than enjoy, in the meantime. Also, if you’re better prepared physically, you’ll be better prepared mentally. I’ve seen thru-hiking described as “purely a mental game,” but I don’t think it’s that simple. Physical and mental health are linked, and I’m guessing that people who train for their thru-hike quit at lower rates during the first few weeks. I’d be willing to bet they experience fewer overuse injuries, and that they “embrace the suck” more easily.

Running a marathon has been described as a “20 mile warm-up followed by a 10k race.” I ran my last marathon about 15 years ago, but I remember each race getting tougher after 20 miles or so. Physically tougher, anyway. Mentally, I always found the hardest part was the distance between mile-markers 15 and 20. A fast time over the first 15 miles was an achievement in itself, but there was still a long way to go, and I often doubted I could keep up the pace. I considered that five mile section to be “No Man’s Land.”

In 2021, my SOBO thru-hike was interrupted by the blanket closure of California’s National Forests. I had to leave the trail for several weeks, which meant missing all of northern California. This year, I applied for a NOBO permit with a start date that would hopefully put me one step behind the melting snow, and one step ahead of the inevitable wildfires. If all went to plan, I’d start July 13th 2022, and I wouldn’t stop hiking until I’d completed my missing section of PCT.

My journey began with an early-morning flight from Boise to Los Angeles, then onward to Reno. During the second flight, I tried to trace the path of the PCT as I flew over some familiar landmarks. Looking down at the Sierra Nevada, I could see that almost all of the snow had melted. There was, however, a fair amount of smoke which had settled into many of the valleys. The smoke was probably coming from Mariposa Grove in southern Yosemite. (The Washburn Fire had started five days earlier.)

I had some time to kill in Reno, so I spent almost an hour walking from the airport to the nearest Walmart. I’d previously checked online to make sure they had 8 oz. fuel canisters in stock. Since then, they’d sold out. I muttered quietly to myself, turned around, and went back the way I came.

During the walk to REI, I stopped at a Post Office to send my duffel bag home. (I decided to keep my Microspikes, and it would be several days before I discovered I didn’t need them.) By the time I returned to the airport to catch my bus, I had a fuel canister, I’d walked six miles, the temperature was in the mid-nineties, and I was starting to smell like a thru-hiker.

That night, I camped at the Mono Vista RV Park in Lee Vining. No pre-trail nerves this time around, just simmering excitement tempered by having been awake since 3 AM in the adjacent time-zone. The sound of traffic on the nearby 395 kept me awake for about 30 seconds, and then I overslept slightly. At 6:15 AM, I broke camp quickly and walked to Mono Market to buy a junk-food breakfast. I talked to a couple of Dutch thru-hikers whose friends had just quit the PCT. I offered my commiserations, and we chatted until the 7:45 YARTS bus arrived.

Approximately 10 thru-hikers were already on the bus. At least, I guessed they were thru-hikers. Their clothes had that sun-bleached, cleaned-but-not-clean look. At the first of two stops in Tuolumne Meadows, my suspicions were confirmed. The bus emptied, and everyone retrieved their lightweight-looking packs before disappearing in the direction of the PCT.

A little after nine, I merged into traffic on the thru-hiker freeway, and hit the gas. The last time I was in Tuolumne Meadows was 2019, when I was nearing the end of the John Muir Trail (JMT). This time, I recognized Cathedral Peak in the distance, but quickly left familiar scenery behind. I followed the Tuolumne River for several miles as it meandered across the meadows before cascading down a granite slope. Then the PCT took a right-turn, and I cruised along for a few hours until reaching a campsite next to Return Creek. Two more NOBO’s soon stopped to camp. Finally, the Dutch couple I’d spoken to that morning arrived. It had been a short, easy day.

My second day was neither short (time-wise) nor easy. It started well enough, and I made my way quickly to the top of Benson Pass. I stopped for a break, and watched a pair of older hikers coming from the opposite direction. As they slowly reached the top of the climb, I gave them a cheerful greeting, but they were in no mood to talk. After beginning my descent, I started to understand why. The roughest downhill that I’d experienced in the Sierra Nevada was the JMT’s Golden Staircase. Coming down from Benson Pass was worse overall. I spent most of the afternoon tiptoeing gingerly over the rocky terrain while my average speed continued to drop. By the time I reached camp, it had taken me almost 10 hours to cover 17 miles. 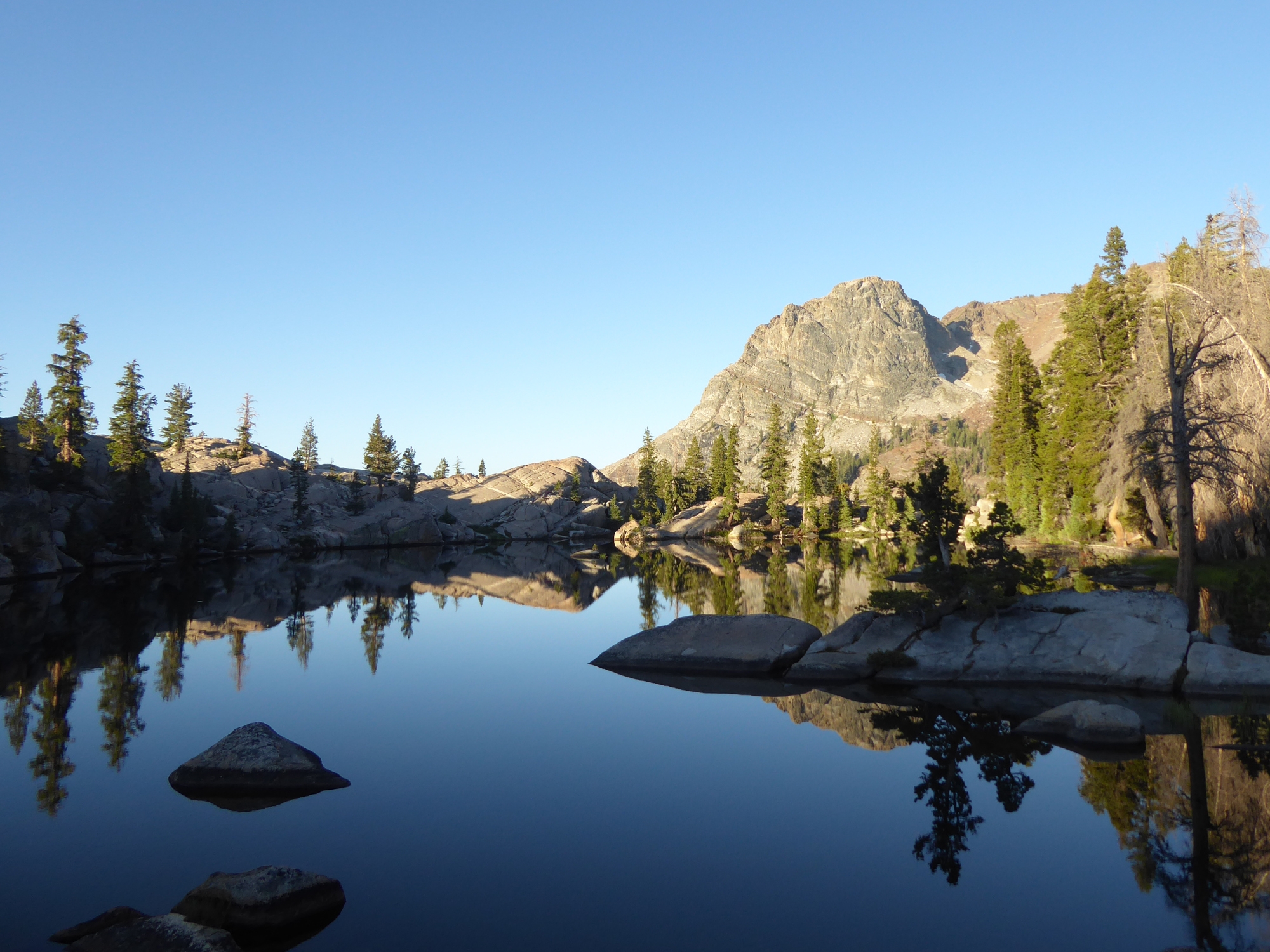 But if there’s one thing I learned during my time on the PCT, it’s that the bad days help me appreciate the good. I woke the next morning at precisely the time I intended, without needing an alarm. It was a relief to be awake, because in my dream, I’d been stuck in a boring conversation. I broke camp quickly, and departed before my entourage of mosquitoes realized what was happening. I was up and over Seavey Pass in no time, and I didn’t stop until just after the Falls Creek crossing. After lunch, I went for a swim, and chatted with four other NOBO’s. I’d camped with two of them on my first night, and they remained in high spirits. The other hikers, for different reasons, were suffering from a lack of motivation. I’d found my first two cases of the dreaded NorCal Blues.

A tale of two campsites

That evening, I camped at a bend in a small, dry wash. It wasn’t far from the PCT, but it was completely hidden from the trail. I had plenty of time before sunset, so I sat on a gravel beach beside Falls Creek, just watching and listening. As the sun dropped behind the mountains, the mosquitoes finally caught up with me, and I retreated to my tent. Getting up early might sometimes be a struggle, but I really enjoy arriving at camp with enough time to relax before dinner. In fact, here are the top-three routine things I look forward to each day.

My next campsite wasn’t just my favorite on the northern California section of the PCT. It was quite possibly the best I had on the entire trail. I left Yosemite National Park early in the morning by crossing Dorothy Lake Pass. I wouldn’t have realized it was a pass except for the waypoint in Farout. White granite hillsides were soon replaced by rocky brown slopes that looked more like the Cascades than the Sierras. After a big climb up one such slope, I traversed for a mile or so until I reached my destination for the day. I stopped at a tiny windswept campsite sheltered by a bunch of stunted tress and a solitary tall one. At an elevation of 10,500 feet, there was a hint of a breeze, no mosquitoes, and a truly awe-inspiring sunset.

The best of times: arriving at camp.

Next morning, I hiked for two hours to Highway 108, and arrived at Sonora Pass at the same time as a Danish hiker I’d met the previous day. She immediately charmed Tony, the driver of a late-model SUV, into giving us a ride. By the time we arrived at Kennedy Meadows North, the rear brakes on Tony’s 4×4 were producing an alarming amount of smoke. We hurriedly thanked him, then took the side-road leading to the resort. After collecting my resupply box at the general store, I went behind the building to the area set aside for hikers. There were tables and bench-seats under an awning, and a place for charging phones. It was still quite early, so there weren’t yet many people.

A handful of hikers gradually arrived, either solo or in pairs. Then, the morning shuttle pulled in, and things really livened up. I’d already repacked my bear canister, and I had nothing else to do except wait for the afternoon shuttle back to the trail. So I set about distracting as many people as possible from getting their chores done. I learned that almost everyone started the trail at Campo, they typically began during the third week in May, and several of them were struggling through their own personal version of No Man’s Land.

When running 26 miles, I learned that I needed to stop thinking in terms of how far I’d come versus how far remained. Taking a similar “one day at a time” approach might just help you get through 2,600 miles. When starting the PCT, I quickly stopped paying attention to the absolute mileage displayed in the Farout app. Instead, I focused only on the distance I needed to hike each day in order to reach my next resupply.

I also tried to avoid checking my progress frequently. If it’s true that a watched pot never boils, it’s also true that you’ll be constantly disappointed if you check your GPS too often. I rarely did an average-speed calculation until I’d been hiking for about four hours.

Most of the people I met at Kennedy Meadows North had been leapfrogging each other for hundreds of miles. In some cases, they’d known each other since the southern terminus. Yet they were happy to include me in their conversations. It was a friendly and welcoming atmosphere, and for those suffering from the NorCal Blues, I hope talking about it helped. The PCT is a physical and emotional rollercoaster, and with luck, everyone I spoke to ended up enjoying the ride.