July 17th
Towards the end of this day, I stopped to filter water from a small pond, and a friend caught up to me.  He told me that he was planning to camp at a great spot he had heard about up ahead, an open mountainside site with great views of Mount Shasta ahead.  (Mount Shasta is a volcano at the southern end of the Cascade range of mountains, with an elevation of over 14,000 feet, and is often visible for days on end, from the PCT.  It consists of four overlapping volcano cones, quite grand.)  He said, “You’re welcome to camp there, too.”
I did end up camping there, with a few others.  The view from that site was truly great, with multiple ridges visible out to the horizon, including Shasta.  Three of us spent the evening cooking our meals, sitting, chatting, and always looking out towards Shasta and watching the view change as the sun set.

Panorama of Shasta in the evening. 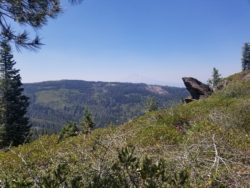 Shasta out in the hazy distance. 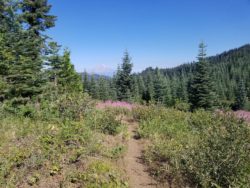 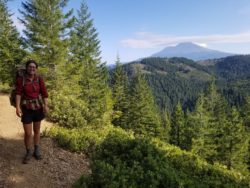 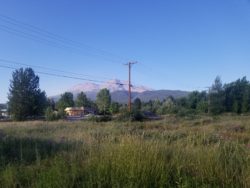 Shasta- view from the city of Mount Shasta.

I had set up my tent, but ended up sleeping out in the open beside it, so that I could wake up and watch the stars throughout the night.  (And easily retreat to the tent if I needed to!)  Around 0200, the sky was clear and filled with abundant points of light, including the Milky Way.  I looked above and then all around, at the silhouettes of the mountains surrounding us, outlined on the horizon.  It was well worth waking up for, and watching for a while.
In the next few days, we had so many views of Shasta, nearing it, then viewing it from below, when we were in the city of Mt Shasta, then hiking around and away from it.  It was pretty neat to see several sides and views of that volcano.
July 18th
This day brought something new because I was late getting to the camp site I had planned to reach.  I talked too long to another hiker, and then had to hike through a sunset, and down toward the McCloud River, as the half moon came out.  It was really beautiful.
Another hiker was also night hiking, and walked by me with his headlamp shining.  I watched his light weaving down the path below me for a while, before pulling out my own.
It was beautiful to see the moon beam cut down into the deep forest, and shine on the tree trunks of huge Douglas firs.  Like sleeping giants.  Probably one of the most peaceful things I’ve seen out here, among a whole lot of peaceful scenes.
I finally got down to my campsite around 2230.  I rarely hike that late, and probably won’t again for a while, but it sure was neat to be out there so late, for this one night.
July 19th
I slept in this morning after such a late night!
The morning was spent descending the rest of the way down to McCloud River, a long gradual descent on switchbacks, through fir forest.  In this area, and for the next few days, I saw more remarkably large Douglas firs.  Their needles and boughs are sweeping and fine, so graceful in a breeze.
It had gotten hot by the time I made it down to the McCloud River.  This river truly was cloudy.  I was told later that a glacier up on Mount Shasta is melting quickly, increasing mudflow into Mud Creek, which then feeds into McCloud River.  The water was turbid like creamy coffee water.
I had not realized there were glaciers up on Shasta.  It was difficult to imagine a glacier within view, while hiking through intensely hot afternoons.
Apparently there was also a wild fire up on Shasta- which I then did see for myself the next day, from the base in town.  A big plume of smoke going up from the side of the mountain.
July 22
The trail grade was easy to begin the day, and shaded.  We were working our way along the base of Castle Crags, looking up at them.  The trail wound up and up on switchbacks, and then over to other nearby mountain faces, so that by the end of the day I was level with Castle Crags, looking back on them from nearby mountainsides.  Eventually the trail even took me up above them, and I could see Mount Shasta appear from behind.  It was really neat to be able to trace the day’s hiking from way down below, winding all the way from roughly 2000 feet to 7000!  The entire day’s work, traceable.

Castle Crags with Shasta behind.

July 23
I woke up early this morning around 0400 and saw a golden moon on the horizon.  Once again, a beautiful horizon silhouetted by pretty mountain ranges.
I slept another hour and a half, then packed up and walked up the trail, towards a nearby site where several other hikers were camped.  I walked up to find my friend buckling his hip belt, just about to head out himself.  He said, “Perfect timing!” and I felt thankful.  I hadn’t known if anyone would still be there or not.
We had a good day of hiking together off and on throughout the day.
In the late afternoon, we watched smoke roll in, thicken, and cover the blue sky above.  It was like being an ant down in a bowl, looking up while someone above slowly pulled a white cloth over the top of it.  It’s tough to say where the smoke came from- we heard different reports of it coming from Shasta, Lassen, or even from the Bootleg fire up in Oregon.
We made it to our camp area for the night, and set up, ate our meals.  My friend was anxious about the smoke, and said we’d be lucky to sleep at all that night, in these conditions.  (I knew I’d be sleeping pretty well, after putting in another full day of hiking.)  He was concerned about potential trail closures ahead due to thick smoke, or from new fires.  We planned to wake up early and potentially hike more miles the next day, in an effort to out hike the smoke.  (I forget where the smoke had come from that time, but over the next days and weeks we accepted hiking under smoky skies as a new norm, smoke from large, known fires often blowing in and out over the course of the day.)

We saw a red moon come up, which was both ominous and pretty.  There would be many smoky red moons and suns to come, in the days that followed.
July 27
On this day, I hiked through the Marble Mountain Wilderness.  There were beautiful peaks all over, marbled and multi-colored, living up to their name.  There were some visible burn zones, but in spite of that, the area was desolately beautiful, with visible black, grey, orange, yellowed peaks, purple fireweed, green shrubs, brown burnt pines, black spires, bright neon green wolf lichen.
At one time I might have thought of the weather as gloomy, with dark clouds overhead, but it was such a relief to hike under those clouds after months spent under bright, hot sunlight.  The clouds brought out all the colors.  It was also a relief to be hiking under smoke-free skies, on this day.
I imagined I was hiking from bowl to bowl, looking back on one and into the next when I hiked up and over a pass.  The arc of the path was pretty neat on this day. 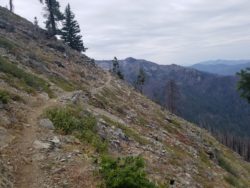 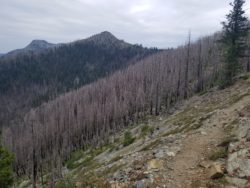 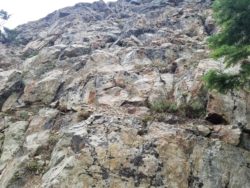 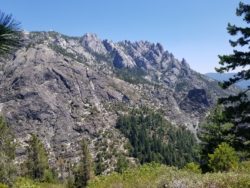 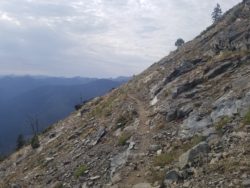 These are some of the things that stuck out to me in this section of trail.  It continues to be a trip full of new peaks, sights, experiences.
< Previous Post
Next Post >

I hiked the Appalachian Trail northbound in 2017. I ended that trip with a love for backpacking, and have only grown more fond of it since then. I will be hiking the Pacific Crest Trail in April 2021. I will start in southern California and hike northward. Hoping to share some of that experience with you through this blog!