We grabbed some more milkshakes (24 ounces each), spilled one all down the front of my hiking dress (again), and made for the climb out of Cascade Locks. It was absolutely worth the discomfort. While singing silly songs, intentionally butchering the lyrics, and eating lunch, we all came to the same realization: if we could average 27 miles a day through Oregon, we would be done in three weeks. 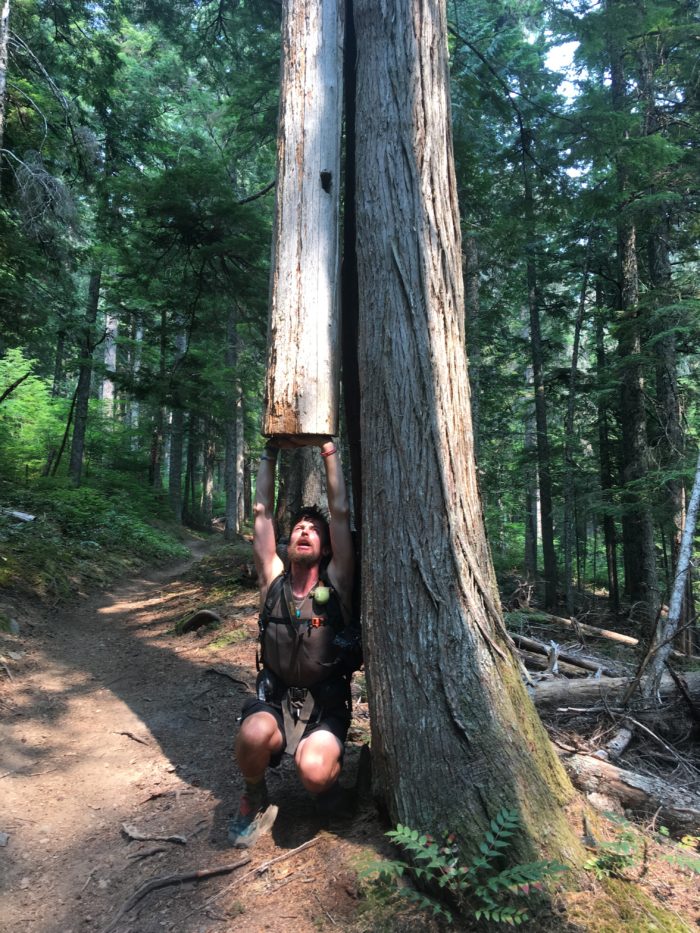 To be honest, it wasn’t that hard. Doing high mileage through Oregon just means you have to get up early and stop messing around every hour on the hour (which I do all the time). The insane amount of smoke actually made it easier to hike farther because I wanted to get through it immediately. But, it did have some weird side effects. The smoke distorted the light, making it seem like time had stopped passing. It would feel like it was 5 p.m. all the time, which was like trying to hike all the way through eternity. I was so tired, and all my snacks were gone by 2 p.m. every day. Booger.

Then, there were the wasps. They were vicious and out in the thousands. Every time we paused for a snack break, filled our water bottles, or hiked off trail to pee, they were there, swarming us. PB and Sweettooth got stung every single day, sometimes up to three times each. Smash and I handed out antihistamines like they were M&Ms to keep their legs from ballooning on trail. Why do Oregonian wasps hate men? And where the heck was Timberline Lodge? We needed a morale boost. 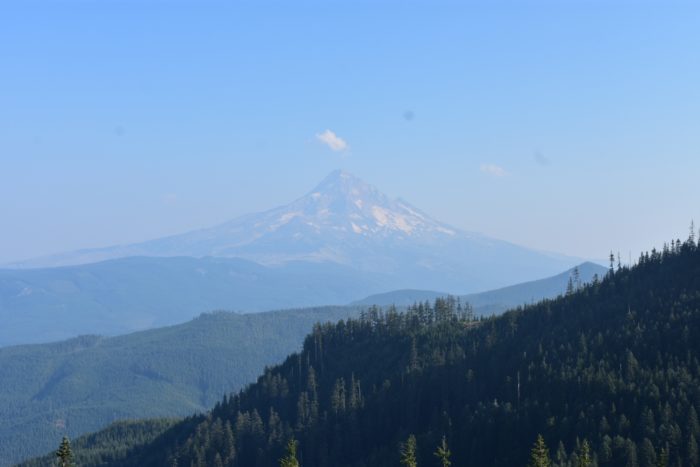 At last, the smoke began to clear and these enormous mountains rose up out of nowhere. Jefferson, Adams, and Hood appeared on the horizon, but, (almost more importantly… almost) there was Timberline with its all-you-can-eat breakfast buffet. We made it to the lodge just after dark and set up our gear to cowboy camp among the field of campers. Good grief, that was a mistake!

The wind picked up on the little wooded knoll and, suddenly, we were being sandblasted by granite dust and coated in sap that whipped off the trees in streams. When we woke up the next morning, it was like nature had tarred-and-feathered us. On a more positive note, maybe you could call it “High End Nature Exfoliation and Moisture Lock.” Timberline could use it as a spa attraction and we could be the models for their advertisements. I bet that would pay for at least 25 Snickers bars. The maitre d’ was extremely forgiving of our disheveled appearance, and gave us a giant hiker table right next to the buffet. Oh, what a wise man!

We ate consistently for over an hour before we even started to become painfully overfull. Sweettooth, our Swiss friend, was in heaven when he found the waffle maker and enormous pile of Danishes. He said, “I feel like I’m back in Switzerland and could hike forever! I just need enough pastries.” Smash, our resident Kiwi, and I contented ourselves with seeing how many pounds of sausages we could eat and how many inappropriate jokes we could make while doing so. Eventually, the whipped cream distracted me too much to continue the contest. Brace yourselves, this is about to get detailed.

I’ve never had whipped cream like this before. It was as if they had made it in-house, but instead of just mixing cream and sugar together, they added cream cheese and coated the small mountain in giant sugar crystals. I pushed the real food aside and filled a cereal bowl with the glorious confection, added berries, and ate five bowls worth. This is all I need in life. Sometimes I love the hiker hunger. It was the only way to do justice to this buffet. Unfortunately, the gang (Sweettooth, Smash, and PB) all walked away with one giant regret: they should have eaten more waffles when they had the chance! We’ll just have to come back and try it again someday. But that’ll have to be after the waiters band together to roll us out of here. 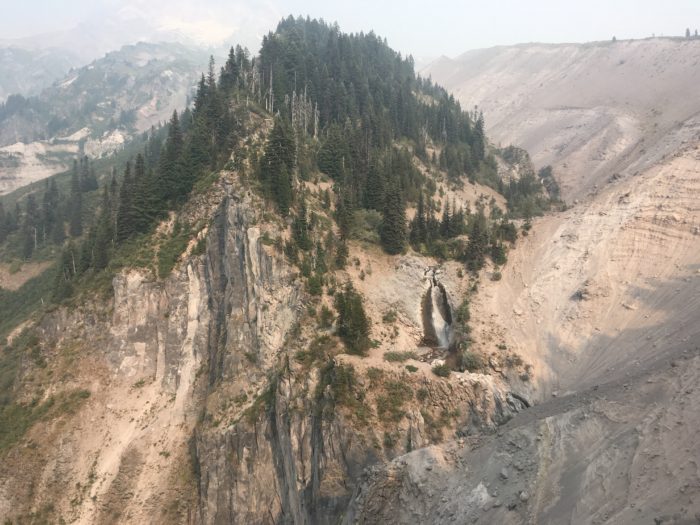 Eventually, we left and continued to boogie through Oregon. The days flew by, marked by lava fields and looming ghosts of mountains on the horizon. Water sources became few and far between. By the end of the state, we were carrying all of our water for the whole day, typically hiking 20-30 miles before we could reach the next mud puddle. On the final stretch, we were pushing the final four more miles to camp and water for a 33-mile day, when the sun set across the lava field. We stopped for dinner, pulled out our headlamps, and headed back into the woods. That’s when we saw the eyes glowing back at us.

Usually, I would have thought, “Oh, look. A deer. Doing deer things. Hey, deer! Enjoy the berries.” But this wasn’t a deer. You know how certain animals act differently? For example, deer freeze and stick their heads in the air to get a better look at you. Only their ears move. Lizards freeze, and if you make any movement, shoot off in another direction. Dogs and wolves lower their heads and will move them back and forth, trying to catch a scent and a glimpse of whatever is nearby. That’s what this set of eyes was doing. We looked down at the trail, spotting only what looked like dog tracks and those of some elk or deer–none from people. Well. Not a dog, then.

Before I saw those eyes, I was bonking pretty hard. Afterward, I have never hiked so quickly. You’d think seeing a wolf in nature would be an incredible experience: spotting a keystone predator in all its glory keeping the ecosystem balanced, you know, doing the wolf things that it does. In reality, at least when hiking at night, it’s pretty nerve-racking. I held out my trekking poles, finding the one that had some semblance of a tip left on it, and started making absurd plans.

“Remember when you and your brothers would steal mom’s curtain rods to practice sword fighting? It’ll be like that. If it comes at me, I’ll whack it on the nose with the handle of the dull pole and stab at it with my spiky pole. If it comes at PB from behind (because I was hiking in front), I’ll swing a pole around with my goat-shredded wrist strap.” But it never came to that. Duh. Wolves don’t care about people. So, we made it to camp, safe and sound.

“Did you see anything that looked… wolfish out there tonight?” I asked the rest of the gang.

“Yup,” replied Smash, “It looked like a really big dog, but I didn’t see any human footprints. It was too big and the wrong color for a coyote. You know, Nightwatch got three wolves on film around here a week ago, right?”

“So… did we just night hike with wolves?”

“Pretty sure. Bet you can’t say that every day.”