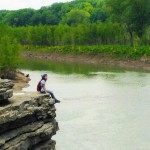 So you’ve decided that you want to embark on the crazy journey to hike along the Pacific Crest Trail, 2,650 miles from Mexico to Canada. You are so enthralled in spending hours intently watching gear reviews that at some point, it hits you… “I’m going walk… from freaking Mexico to Canada… through animal- and criminal-infested back country where my only means of getting to civilization is to break Mom’s strict stranger-danger rule…. What am I THINKING?!”
For some, their perceived fears of the trail are enough to keep them off for good. For others, they don’t really think about it until they get to Campo and get cold feet. The goal of this post isn’t to give you more things to be scared of, but to talk about why some things people think are scary aren’t so bad. Oh, and we’ll also discover what my number one, Mac-daddy, literal nightmare-fuel fear on the trail is.

One of the first things people ask when you’ve told them your plans to hike from Mexico to Canada is how you will defend yourself against others. “You bringin’ a gun?” Some will ask. Others will simply state, “You need to watch out in Mexico,” as one coworker keeps reminding me sternly whenever I bring the trail up. Often, both of these camps will give you an incredulous look or a head shake when you state that you aren’t going to be bringing a gun, a knife, or even bear/pepper spray. Most of these people seem to think that the trail is a time machine back to the Wild West days. They are convinced there are bandits hiding out in the desert just chomping at the bit to scalp you or hold you ransom for gold (not like that happened much back in those days either).
Most assume that the back country is crawling with people just lusting to hurt you. The reality is that any city is going to be more dangerous than the trail. Sleepy or drunk drivers, door-to-door vacuum salesmen, and bankers all congregate under the city lights, and they wish more harm to you than people on trail. The majority of people you will meet are super nice and want to help you. At worst they’re simply indifferent. That being said, it’s best to not hitch alone, and don’t feel bad about turning down a ride if something about it tickles your Spidey Senses.
So if other people aren’t something to be afraid of on trail, then what is?

Well if people aren’t worth worrying about, then the bears, snakes, mountain lions, spiders, scorpions, and squirrels must be! Right…? To be honest? Not one bit. That doesn’t mean that you shouldn’t carry a bear can in the Sierras, though. Not only will you get fined if you don’t, but your bear can serves to protect the bears, not your ramen. It turns out the old adage is true: the animals are more afraid of you than you are of them.
The local fauna wanting to avoid you isn’t a reason to tune out to your surroundings, however. Caution should always be taken to not have any accidental close-calls with the wildlife. Always hike with one earbud out if you are listening to music so you hear the rattlesnake telling you that you have invaded its bubble. Don’t forget to bring your shoes inside your tent in the desert, too, so you won’t get any new arachnid friends. Truth be told, no one has ever died from a wild animal attack while on the Pacific Crest Trail. In fact, here is a comprehensive list of all the recorded deaths on the trail, and a whopping 0% of them are from animal attack. Embrace the beasties, friends, and don’t forget to take lots of pictures.

For some, the idea of leaving their friends, family, loved ones, or hometown is simply terrifying. Perhaps the idea of life going on perfectly fine without them is a source of existential anxiety. On the other side of the spectrum, perhaps they are afraid of leaving and consequently the lives of those they left are now falling apart. I won’t deny it. I am a tad worried about coming home from the trail to find myself with a fat dog, a trashed house, and an unmotivated husband.
The best way to overcome these fears is to talk about them. Talk to your friends and family about your hike and what their plans are when you’re gone. Most of them will be completely blind-sighted by the question and not have a decent answer. That’s perfectly acceptable. You have been the one planning out the next five months to the week, not them. However, this gives both of you an opportunity to think about the time you will be gone, and prepare for being apart for perhaps the longest you have ever been.

You have just made it to the first pass of the day while in the middle of the Sierra. You made it there later than you wanted the snow is starting to get pretty slushy. Throwing on your microspikes and playing your all-rush mix tape, you set out. Making your way up the pass, you see evidence of people post-holing near rocks, and you try to be super careful. All of the sudden you feel your foot give way, and you begin to fall sideways… And: scene.
Sound scary? If you checked out the list of all recorded deaths on the PCT, you will have noticed that the vast majority of the lives lost were from falling. This may make those Sierra passes a bit more terrifying. So how do you make falling to your death seem less scary? The best way is to be prepared. When you are hiking in precarious terrain, make sure you pay attention to your surroundings and go slow. The second pass you wanted to make it over today will still be there tomorrow.
Be sure that if you are carrying an ice axe (which you probably should), that you know how to use it, but more importantly that you have actually practiced with it. Take a mountaineering course, or get out to some sledding hills in winter and pretend its Mather Pass. Most importantly, try and hit those sketchy passes in the morning, when the snow is firmer and you have a lesser chance of post-holing or slipping.

I have saved the most gut-wrenching point for last. Some of you may laugh, thinking “Bears are a much more real fear than the weather.” And that is where you are absolutely wrong. The fury of Nature is absolutely terrifying and She does not give two shits about your insignificant ass.
Heat stroke is deadly. It has already claimed several lives on the trail. If you are stubborn, like me, you may want to shake your fist at the sun and triple-digit heat and continue pushing the last 15 miles you wanted to hike today. This, however, is a great way to get heat stroke, along with a heaping helping of sunburn and heat rash. To avoid becoming a fried egg, do like the desert animals do and become crepuscular. That means be more active in the early morning and evening, when it is cooler. If you experience a throbbing headache, a distinct lack of sweat, nausea or vomiting, these may be symptoms of heatstroke, and be sure to get help ASAP.
And now we come to my biggest trail fear. It is probably the fear that elicits the most pure terror and panic in me. What is it, you ask? Lightning. You may scoff, but according to NOAA, there is no safe place outside in a thunderstorm. Is this sinking in with you? The ONLY safe place is inside, which is pretty hard to come by out in the middle of nowhere.  To me, nothing is more bone-breakingly terrifying than being caught with no good place to hide in a thunderstorm. With imminent-death clouds on the horizon, what should you do? I will point you to this series of articles that will give you the tools to lessen your chances of death by angry god.

All of the points I have touched on are all things that people have been afraid of. For some, it kept them away from the trail, and those people never got to realize their dream of thru-hiking. Those that pushed past their fears and took on the trail anyway attained something truly admirable: personal growth. Eleanor Roosevelt said that we should do one thing a day that scares us. Being out of our comfort zone is the only way to expand it and make the ‘uncomfortable’ zone more tolerable. The Pacific Crest Trail is the perfect opportunity to face your fears, embrace them, and overcome them. Be bigger than your fears and hike that trail.
< Previous Post
Next Post >