Thru-Hiking Reflections One Year Later: The World is Burning

A year ago this week, I completed my thru-hike of the Pacific Crest Trail. It was a trial by fire, in the proverbial sense; I had been backpacking just three times before attempting the PCT, and none of those trips had lasted more than a night.

But the fat and self-doubt burned themselves from my body in equal measure in the 146 days it took me to touch the Canadian border from the Mexican one, and after 2,650 miles of walking I came home convinced of my own capability and of the endless, everlasting splendor of our natural world.

Not so for the class of 2017. Theirs has been a thru-hiking season marred by fire, and now seemingly all of Oregon and Washington are ablaze.

What the world demands

When I was a teenager, I entertained for a few years the notion that I might want to be a firefighter. Teenage-hood is a time deeply concerned with death; I can’t have been the only fifteen-year-old with a touch of the martyr about me. I remember the impetus vividly: I was on a date to see the movie Ladder 49, a terrifically sad film starring Joaquin Phoenix as a firefighter looking back on his life as he lays trapped in a burning building.

As the movie ended, with Phoenix dying a hero’s death and my date–the girl who, years later, would become my fiancee–bursting into tears, I remember sitting back in my shitty red theater chair and thinking maybe this is the best way to live a life–sacrificing oneself for others, even if it means your own death.

That was over a decade ago, and now I’m not so sure about that last part. I would like to live a very long time and the martyr’s impulse has been beaten back by the life I’ve built. But that doesn’t mean the world doesn’t still demand sacrifice of us–quite the opposite, in fact, if we are all to live a long time.

If that seems melodramatic, I apologize. But I am writing down these thoughts from my desk in Seattle, where it has been raining ash all day under a sun tinted blood-red by the smoke in the sky. Hurricane Harvey made landfall just over a week ago, wreaking untold decades’ worth of devastation on Houston and its neighbors, and as I write this, Hurricane Irma bears down on Florida and the Caribbean, having already destroyed Barbuda. These cataclysmic times feel almost biblical in scope, and we are now daily forced to reckon with a drowning, burning world over which our thin veneer of control has been lost.

That “we” includes thru-hikers, a group that for all its charm seems wracked by hedonia and an unwavering commitment to the pleasure principle, which necessarily makes politics seem like a useless distraction that has no place in trail life. (That these trails wouldn’t exist without the practice of politics is an inconvenient aside.) 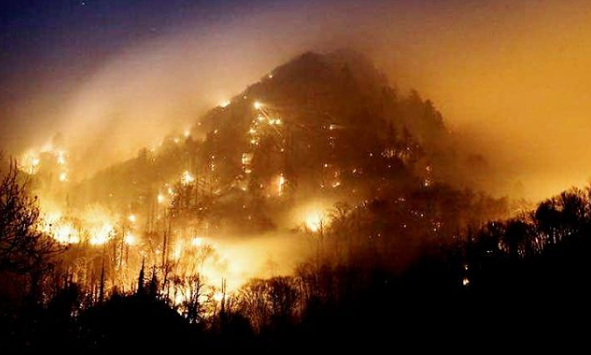 No longer an option

I believe that the thru-hiking community no longer has the luxury of opting out, politically. The world is burning. At least one of the fires ravaging the trail this week was man-made, but so were the conditions of heat and drought that allowed the Eagle Creek fire to spread so rapidly and jump the Columbia River Gorge. We live in strange and frightening times–why wouldn’t it be raining ash this week?

The thru-hiking community is bursting with kind and wonderful people. It seems to me the group of people who has best known the splendor of our world can and should be the group best-suited to save that world for those who will come after us. That’s the real rub, here. We do something, or we face the prospect of (among many other horrible things) being the last generation to know the sheer transformative joy of the thru-hike. I have to believe that, of the many lessons that thru-hikers learn on their journeys, the need to protect nature for years to come and the power of people working together on a seemingly impossible task rank somewhere near the top.

I cannot tell you in which way, in which arena, you are best suited to help. But help we all must. The world is burning.