After two zeros, I was ready to get back on the trail.  Nice and rested and ready for all the road walking coming up.  Maybe I am just getting used to it, but road walking isn’t as dreadful as I used to think. Doesn’t mean pavement is any better, it still sucks. But mentally I’m not so bummed about it anymore. Today’s Passage turns out to be better because once off the major roads it was a sandy road, instead of pavement. 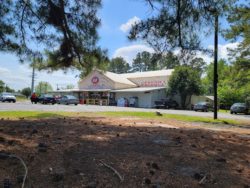 This was a pretty uneventful Passage.  Walk from Santee to Vance and then onto Eutawville. In Vance, I stopped for lunch at a Pavillion next to the community center. It was nice to be in the shade. At one point I stopped for a break on Dunkirkenfield Road and waved at a car as they were driving by.  They stopped and asked if I needed help, and I said no just being friendly.  Then he wanted to know why I was on his land.  This surprised me and I told him I didn’t know, just taking a break and having a snack.  He seemed fine with it then, wished me a great day and drove on. I ended the Passage in Eutawville where I stopped at a IGA (grocery store) where I picked up a cold soda and a candy bar.  Then sat in the shade and relaxed under a massive tree.

From the grocery store,  I followed the road out of town.  Passed by a huge tree which was dated over 300 years old.  This Passage will be more road walking, a mix of pavement, sand, and trail. It’s also the most unloved part of the Palmetto Trail I have come across so far. The section of the trail that leaves the road into the woods between Gardengate Road and Battlefield Drive was so overgrown I had to bulldoze my way through branches, bushes, and vines that are trying to take the trail over.  Signage was great getting between the two roads.  My plan was to stay at a primitive campsite, which was in the middle of this mess, but I could not find it at all. When I arrived onto Battlefield Dr. in a residential area, I gave up and just continued forward.  Soon enough I came onto a Battlefield Site and stopped for a break. 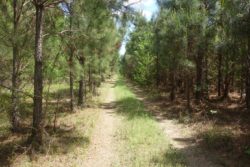 I read about this battle in my book earlier on the trail.  This is a Revolutionary War site. A few interpretive signs up to explain the battle and those involved.  It was a very shady place and right on the lake.  I thought of stealth camping here but decided against it.  I did notice a campground in the  Santee Cooper Wildlife Management Area, which is also a side trail of the Passage.  So I ended up taking the yellow line and walking a nice road up to the campground.  Which fortunately had cold beers which I enjoyed on the lake.  Besides the overgrown portion of the trail, the night ended well.

Following morning I would go find the nature trail within the Santee Cooper Wildlife Area.  It’s just nice hiking and see signs along the way that talk of the area.  There was a viewing area over a pond that I had a snack at. You really felt like you weren’t anywhere near civilization in this area, knowing it’s only a couple miles to the town of Eutaw Springs. After getting back on the paved road it’s a mix of sand roads and trail until the end.  Mid day I stopped at a gas station and got some chicken, and took a nice break under a tree. The weather the last two days has been in the 80s and with humidity it’s quite hot. 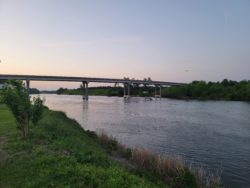 I would end this day at Hills Landing & RV park where I rented a small room on what is called the Diversion Canal.  This canal connects Lake Marion and Lake Moultrie together.  I was so hot it was nice to sit in the restaurant and chug down sweet tea and munch on food. Turns out the owner is a hiker also and we chat about the trail for a bit.

Today’s Passage starts off with a paved road along a bridge that crosses over the canal. It’s along SC Highway 45 almost two miles before taking a side street down to a path into the woods.  As soon as I entered the woods I was attacked by mosquitoes.  First time all trail, and these suckered were huge.  My initial reaction seeing one on my shoulder was a spider. All day will be walking around the lake on a dike. But there are small island areas so I do not see much of the lake except in the distance.  This area is exposed to the sky all day, but today has scattered clouds so while warm, not so hot. 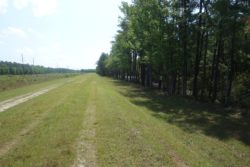 This is also the first time I see alligators in person. I’m actually quite excited about this. It seems the larger gators dip into the water when I start to get close, I hear the large splashing and then watch them glide through the water like a submarine. The smaller ones just hang out on the logs or ground. I run into a total of 7 for the day.

Walking along the dikes put me high up from the lake and a road on the other side.  I can also see so far ahead of me because there are no trees. Several miles in I come off the dike and follow a sidewalk around what is called the rediversion canal. There are alot of people here fishing all along this canal. After getting to the otherside is a Recreational Area for people to launch h there boats, swim, and picnic.  I take a rest at a large pavilion.  This is a popular place today and there are also bathrooms and garbage cans. 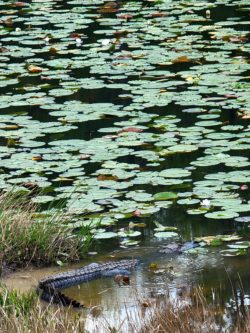 Once my break is done I continue back up onto a dike for a few miles. I’m looking for a primitive campsite between the Recreational Area and a city called Bonneau. It’s on a small island between the dike and the lake.  Follow a road from the dike and it leads to a canoe launch site.  The road is blocked off to vehicles but continues onwards for about 1/2 mile where there is a campsite with a firepit and grill, as well as a picnic table and chairs. Everytime I go near the water I imagine an alligator ready to pull me in.  Fortunately that never happened. 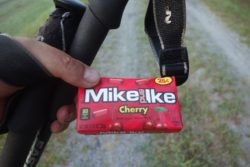 I am only a few miles from town and excited to hit the diner that is along the trail.  Not soon after I started I ran into candy and ice tea drink laying on the dike.  I partook in the candy.  You don’t pass up free snacks. I made arrangements with a local trail angel to get a ride into Moncks Corner for groceries before starting the next Passage. The diner was amazing and pretty busy. I had a full breakfast and filled up on more of that sweet tea.  When finished I sent a message to my contact and followed the trail to another dike.

This part of the trail is actually right on the lake.  It really shows how big it is, you can’t even see the other side. Not soon after I started I run into John who’s going to give me a ride to resupply. He was out for a morning hike and we had a great conversation while finishing the Passage.  An experienced hiker as well we had alot to talk about over the Palmetto Trail and other trails all along the Eastern US. Highly recommend the Southern part of this Passage.  It’s a great walk along the lake on a nice day. The final mile is off the dike and into the woods to the trailhead. The ride to and from Walmart did not take long at all and I’m glad I got to talk with another local.