Slow Down You Crazy Child 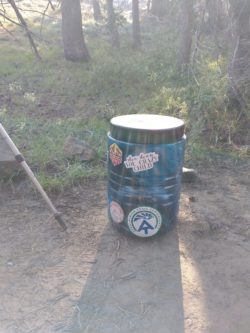 My bear canister has two functions: to hold my food and passive-aggressively remind me of promises that Past Katie made

Finally getting my hands on my bear canister was a huge relief. Well before I left for the trail, I’d packed my resupply boxes and labeled them for my boyfriend so he would know when to send each one. It wasn’t until after the KMN box had been mailed (extremely early as I was paranoid about it being the most important box) that I started hearing rumors about bear activity north of the Sierra potentially leading to new canister requirements. That I’d made it through before July 18 was a relief, but actually holding the canister finally set all my bear-related worries at ease.

Of course, seeing the bear canister also reminded me of a promise I’d made to myself before setting out: I wanted to fully enjoy the trail, indulge in the little things rather than just rack up miles. To keep that goal in mind, I’d decorated the canister with a lyric from one of my favorite songs, Billy Joel’s Vienna: “Slow down you crazy child.” 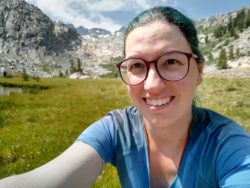 I really wasn’t vibing with the whole “relaxation” thing

Even on days when I only hiked 15 miles, slept in, and made camp early, I didn’t stop to smell the roses. I hiked and hiked until I reached my camp for the night. After finishing the AT, I realized that one of my biggest regrets was that I didn’t take a dip in one of the beautiful lakes in Maine. I decided to take the advice of my past-self and while hiking up Donohue Pass, I stopped at an alpine meadow and dipped my feet in the beautiful stream.

Sure, it was a relief to the sore spot on top of my foot, but no way was I going any further into the water. It was way too cold. Also, what was I supposed to do with myself here? I ate a granola bar, filtered some water, and then felt… bored. All I wanted to do was put my boots on and get hiking again.

Experiment tried and failed. Apparently I’m just not cut out for smelling the roses.

The new fire in Yosemite made itself known the day before I reached Tuolumne. There was a haze in the air that added an almost ethereal quality to the landscape, if you didn’t know it was due to smoke from a wildfire. 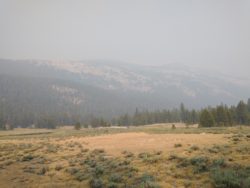 I was excited for Tuolumne day: nearly 20 miles of almost flat terrain, a stop at the store for some snacks, and grabbing my bag tag. So I was a little off-put when it ended up being so hard. I was tired, headache-y, yawning constantly. Each step, even on flat terrain, felt like a challenge. I checked all my boxes though (even trying the water at soda springs which is just disgusting) and didn’t make the connection until I was putting up my tent and observing small while flakes falling – ashes, not snow – that inhaling smoke all day was probably not healthy when also hiking. Obviously I noticed how smoky it was all day – I could barely see the sights ahead or behind – but I hadn’t realized that concentration of smoke could impact me so strongly.

I actually didn’t see that many JMT hikers in this early section of overlap, but I was already frustrated by the few I did run into. Not that they were annoying people, but I’ve gotten so used to being the only person going my way and suddenly I was playing leapfrog with hikers who hadn’t quite figured out how to maintain their pace. I craved the aloneness that had nearly driven me off the trail back in the early days.

Months ago, my dad made an all-too-ambitious preliminary itinerary of our hike, putting us at Walker Pass on August 5. That was obviously not going to happen considering the date, the number of miles, and my knee, but I’d told my boyfriend and he’d planned a trip to visit his mom in CA just so he could also meet me in all my stinky, unwashed glory. So I decided to prioritize my mental health, and seeing Nate would definitely help with that. I reached out to my mom’s cousin, who lives near Mammoth and had already volunteered to help out, and asked if he could shuttle me to skip some miles and ensure I would make my Walker Pass deadline. So after a beautiful afternoon hiking to Thousand Island Lake, I prepared for a short nero to Agnew Meadows and to skip my largest section of the trail yet, all the way to Kearsarge Pass.