I took a zero in Etna to reassess how I felt about the trail. I felt confident that I could physically complete it, but I wasn’t sure if I was as mentally prepared as I’d thought I was. The biggest problem for me, it had seemed, was snow, so I decided that I would give the trail another try, but would make sure that I was far away from any snow banks. I found an amazing trail angel who shuttled me ahead about 40 miles to skip any more snow, and set out.

The section of trail south of Etna was about the gentlest I’d seen so far. No overgrown jungle-like conditions, only about three downed trees, and almost entirely flat or very gently rising or falling. It was also far better maintained and blazed. I felt amazing. I was fully positive that I could do the entirety of this section of my flip, rather than the promise I’d made myself to just make it to the next town. As I approached my evening destination, a cloud descended on the trail and I almost immediately turned back into the girl who wasn’t sure if she could make it one more hour, let alone one more night. 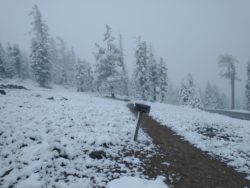 Then it began snowing, and I learned how closely my emotions and the weather are linked. My stomach dropped and I nearly called my trail angel to bail me out. I’m usually glued to the window when it snows, entranced by the magical power it seems to have. But now my opinion has fully changed. If snow had a body, I would not hesitate to punch it.

I made it through the night, and set out the next morning with an odd mix of emotions: I was excited for the hike, but I was very apprehensive after the snow. The mood from the prior day didn’t fully return, though I did feel my spirits rising, despite a brief hailstorm and an unfortunate choice in audiobook to accompany me. And then I got the most jaw-dropping, awe-inspiring view of Mt. Shasta, and forgot all the literal and mental clouds that had been hovering around my head. This was where I wanted to be, and I knew that I could do this.

The same trail angel who helped me get out of Etna picked me up again at the I-5, and brought me back to her home for a shower, home-cooked meal, and proper bed. I’d set that up as another protection for what had once felt like a complete lack of mental mettle but didn’t actually need the break (I appreciated the heck out of it though!). I was back and there was no chance I was going to give up now.

When I got back on the trail the next day, my spirits were still high. I was seeing more and more NOBOs, the weather was beautiful, and my confidence was back. I even camped with other people for the first time this entire hike! 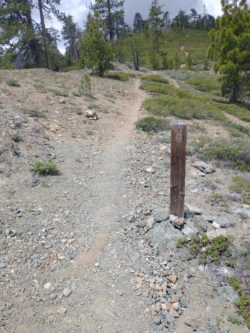 Not long after, my right knee gave up. I don’t recall doing anything out of the ordinary to have hurt it, beyond all the hiking. But I could barely manage a two-mile-an-hour pace on even, gentle sections of the trail. After sitting to take a break, I would gingerly hobble a few feet before adopting a mind-over-matter position and hiking on despite the pain. I was halfway between Dunsmuir and Burney and had no good way to bail out early, so on I walked. With each successive step and each passing day, it became more painful. By the time I got to Burney and finally allowed myself to stop pushing through the pain, I was basically crawling to get from point A to point B.

I couldn’t believe it. Just when I’d finally gotten over my mental block, my body decided to interfere. All I could do was think about when I used to go hiking as a teenager and would literally run down mountains with full packs. God, I miss those days – I miss those knees.

Right now, I’m waiting to see if the knee will heal up quickly. I’m icing it and trying to not put too much pressure on it, and went to urgent care in Redding for a steroid injection. I’m hoping to test it with a slack-pack in a few days, so I’m putting less weight and fewer miles on it. If it holds up, then I’ll be back out there with my renewed spirit!