The Pacific Crest Trail Association (PCTA) warned hikers on Monday to avoid the town of Wrightwood, CA and the surrounding area due to fire danger. The Sheep Fire was first reported at 6:36 p.m. on Saturday evening roughly a mile outside of Wrightwood. Just 1/4-acre in size when first reported, the fire quickly ballooned in size to 30 acres within a few hours. As of noon on Tuesday, the fire was burning an area of roughly 990 acres and was 35% contained. The cause of the fire is still under investigation.

The PCT passes about two miles north of Wrightwood at northbound mile 363. The PCTA warned that the road into town may be closed and conditions in the area could be hazardous. “This situation is still evolving, and anyone hiking through the area could find themselves in serious danger very quickly,” reads a partial news release from the trail organization. Hikers in need of resupply can access services at Cajon Pass (northbound mile 342) instead.

Roughly 300 Wrightwood residents were evacuated on Sunday. The rest of the town remains under an evacuation warning as the fire continues to burn public (Angeles National Forest) and private land. 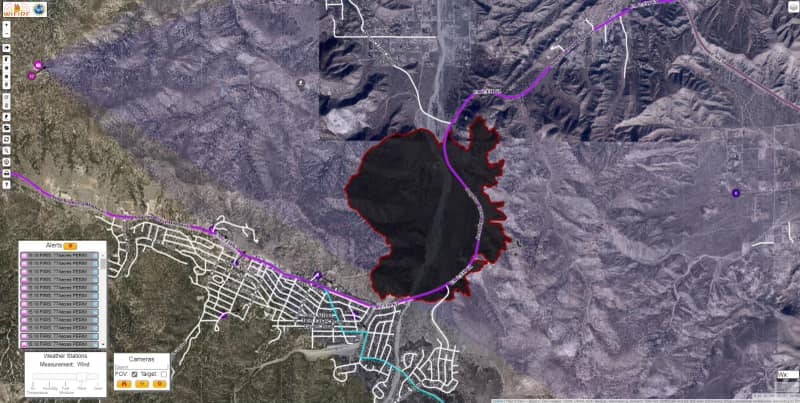 Map showing the extent of the Sheep Fire burning northeast of Wrightwood, CA as of Monday evening. Via San Bernardino County Fire Department.

In a Monday afternoon video update, San Bernardino County Fire Department Batallion Chief Mike McClintock said cool temperatures and favorable winds had allowed firefighters to make great progress in containing the blaze. “Our firefighters from both the ground and the air are working in some of the really tough access above Wrightwood in some areas that haven’t burned for more than 100 years,” he said.

Overall, though, persistent hot and dry conditions, including a multiyear drought, have left much of the region at a high risk of fire. According to the National Integrated Drought Information System (NIDIS), all of California is currently in drought conditions ranging from Abnormally Dry to Exceptional Drought, with the vast majority of the state’s land area in Severe, Extreme, or Exceptional drought. Southeastern San Bernardino County, where the Sheep Fire is located, is in a Severe Drought.

READ NEXT – How to Stay Safe While Hiking During Wildfire Season

California’s fire season is typically most severe between July and October, but fires have been starting earlier and burning larger and hotter in recent years. The growing intensity of fire season has led some to speculate on the long-term feasibility of thru-hiking the Pacific Crest Trail. Last August, for instance, the Forest Service closed all national forests in California, including most of the PCT within the state, for two weeks due to severe fire danger. When fires burn on or near the trail, ensuing damage can lead to extensive closures and reroutes that may last for years.

“Fighting (the Sheep Fire) has been especially challenging due to dense vegetation, steep terrain, and high and erratic winds,” reads part of a recent status update on Inciweb. A total of 673 personnel are working to contain the blaze, many of whom worked through the night to increase the level of containment from 27% on Monday evening to an estimated 35% by noon today.