I’m counting down to the day before the day before I leave; it’s the last day that I can actually  do  anything.  After months of hurry-up-and-wait, final planning tasks take on a somewhat frantic tone.
Work is almost done, one more day that’s largely administrivia, and then I have a solid week to get everything done.  There’s plenty of yard chores to do; wood to cut, split and stack, various power equipment to tune up, and compost to turn.  I also have lots to do in the house – move some stuff around, take care of health insurance, and set up auto pay in all the right places for bills.  And of course spend some quality time with the family.

There are a few things that are a tip-off that shit’s gotten real.  It’s kind of like seeing the first robins in spring, or the first frost in fall.   Little drops in the bucket, little stones that start an avalanche, and before you know it, your life is changing:

–You finish up work.

–Your gear comes out of the basement.

–When you buy the last tank of gas for your car.

–Wunderground has a weather forecast at Campo on your start date.

“It’s a dangerous business, Frodo, going out your door. You step onto the road, and if you don’t keep your feet, there’s no knowing where you might be swept off to.”   –Bilbo Baggins, “The Lord of the Rings,” J.R.R. Tolkien

You can view change as an obstacle, or a challenge.   I’m trying to do the latter, although it gets tough when you have a lot of logistics to worry about – paying bills for six months for one, giving up a decent job and becoming unemployed for another.   But, nothing ventured, nothing gained, as they say.  Given decent gear that you know how to use, and good physical conditioning, you can pretty much handle anything that comes up.

From a practical standpoint, there’s always worries about gear and schedules.   Too much food?  Too much gear?  Enough water-carrying capacity?  Do I need new trekking poles?   What about a new headlamp?   I find that the thing to remember is that guys like Earl Shaffer thru-hiked the AT in the ’40s, with old-school gear, limited maps, and mostly just a lot of determination.

Still much to do

This is probably my most pressing item – I’m not sold on my Hokas.  While super cushiony, they feel… weird.   Strangely what feels the best are my old Oboz Sawtooth shoes, the ones I wore when I had the stress/Jones fracture.  I also have a pair of Altra Lonepeaks, which intuitively seem too floppy, but just might work.   I really wanted to have footwear dialed in long before PCT-10, but it’s been a long road, what with the broken foot, and retraining.  It might be a case of overplanning, I’m still working on my old Oboz, I’ve got the Hokas, and now I’m trying a new pair of Altra Olympus.

I want to get some specialty items that will help kick-start my trip on the right note.   For instance, I’m going to bring macadamia nuts.   Normally very pricey, but they have killer calories per ounce.   I’ve heard of a brand of powdered coconut milk that also comes in single-serve packages; I’m getting a few to try, and will then drop-ship a big container if it works.   Bars and snacks – I stocked up on ProBar Meal bars, 390 calories in three ounces, and loaded with (supposedly) real fruit and vegetables, a nice foil to the endless tortillas and PB.   REI had a 30 percent off sale; I walked out with a pretty big bag.   I’ve got some little coconut oil packets too, as a test.

I need to send mail to Mt. Laguna for day three, and to Warner Springs for the Idyllwild run.   Those both need to go out no later than April 11.   While us East Coasters pay a premium to ship to California, I discovered that the break-even for flat-rate Priority Mail is about four pounds.  Laguna is going to just be enough food to get me to Julian (where there is Pie, and Carmen’s).  I might also ship my spikes to Idyllwild, and then bounce the box back home (thank you USPS Priority) if Jacinto isn’t that bad.  I’m not planning ahead farther than this.   I have a tentative schedule all the way to Kennedy Meadows, but I’m adapting my timetable as I go and as I get to towns with groceries.   I’ll worry about the far north later, like in August.
The problem with mail-dropping food is that for the price and time, you might as well buy overpriced small-town food.   You spend $20 to save a dollar on 20 Clif bars – and burned up the time sending and mailing the box.  I do have some bulk stuff, and things I’m going to send anyway, but by the time you pay shipping it eats up your savings.

I want to slack off probably for the last week, especially the few days before I go, but before that I need to do some 15- to 20-mile full-load, real-pack, real-deal tune-up hikes.  New England April weather may make this challenging, as it just snowed (again).   Luckily I live near some great Audubon Society trails, and even the roads in western Rhode Island are helpful – lots of long ups and downs, just like SoCal.  The gym people just shake their head when I show up with a full pack, then add free weights to it.  I’m up to about 12 miles in five hours with a fully loaded pack, and it’s not crippling.  The biggest issue I’m finding is not muscle soreness or fatigue, but rather it’s the tendons and joints that are creaky the next morning.  I’ll be taking a few days off right before I leave to heal up. 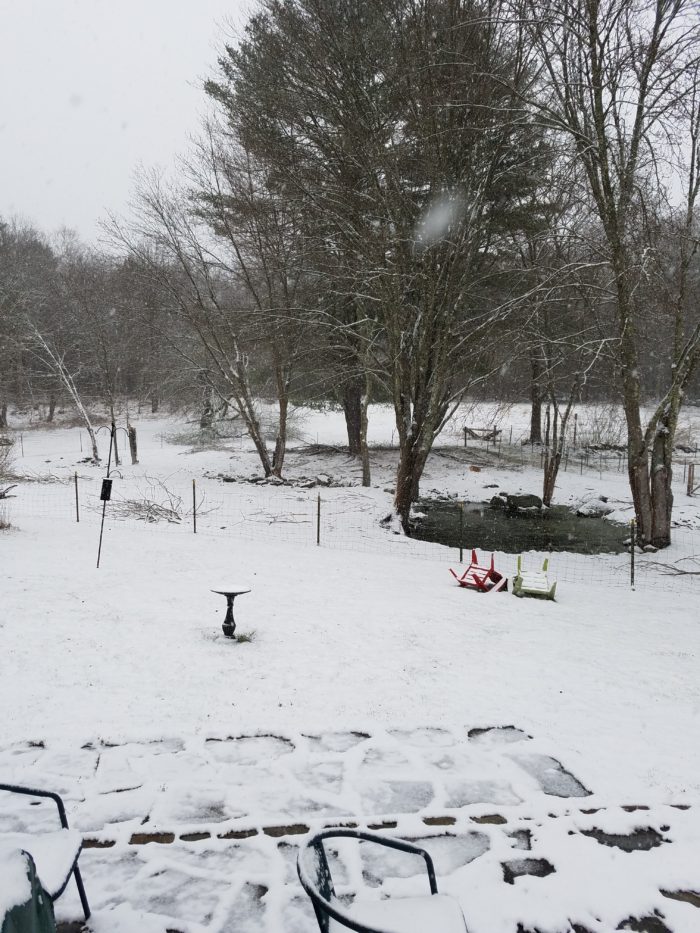 No fun training when it’s like this. It’s fucking April!

I’m on the fence about some of my clothes.  I’m also debating on the ice axe, so I might buy it before I go just in case.  Gram-weenies will count trekking poles as worn so in theory there’s no difference in them, but I might buy some new carbon ones.   They are lighter, and maybe that does help?   I’m starting to get into the analysis-paralysis phase, where I re-scrutinize every piece of gear I’m bringing.  I call it Death By A Thousand Grams.

I’ve already downloaded all the Halfmile maps into my phone, but I need to get my permits copied over, along with scans of my Yogi guides and resupply sheets.   I need to print out the first few Halfmile sections (and trim the white space, naturally).   I’m a paper maps guy, and I even bring a compass.   Plan ahead and prepare, I say.  I’m trying to strike a good balance between planning and leaving myself open to new experiences.  For instance, I’ll be taking some side trails – walking around Morena Lake and cutting down Chariot Canyon.  It’s the same distance, and why walk the same trail I just did 11 months ago?

Once I’m loaded up, I’m heading to REI to use their pack scale as a real-world check on all my paper lists of weight.   Not that it will change anything, but I’ll be curious what my new pack setup weighs after all the tweaks.   I’ll probably be just over 13 pounds when all is said and done.
I’ll end up spending most of a day in the air, and then there’s time for last-minute jitters and frenzy at Scout and Frodo’s, and then it’s off to Campo.