The USDA Forest Service and the PCTA aim to reopen the Lionshead Fire closure on the Oregon PCT by late August or early September, as reported by The Statesman. The 22-mile section of the PCT in the Mt. Jefferson wilderness sustained significant damage from the Lionshead Fire in 2020. The PCTA and the Forest Service are working to repair the trail. These repairs involve clearing dead trees, fixing tread stability, and re-routing the trail along safer and more sustainable paths. Late-melting snow near Mt. Jefferson delayed repairs in some areas until July.

“There are some safety concerns around damaged and missing tread along steep sections of the trail,” Willamette National Forest public information officer Tammy Robinson told The Statesman in an email.

“Opening closed areas continues to be a priority for our forest and the region as a whole,” wrote Robinson. “Safety signage is still needed in certain areas on the forest, and we are working to have that completed by the aforementioned timeline. Additionally, we are working through the closure revision process that can sometimes take a while as coordination is required with several resource areas.” 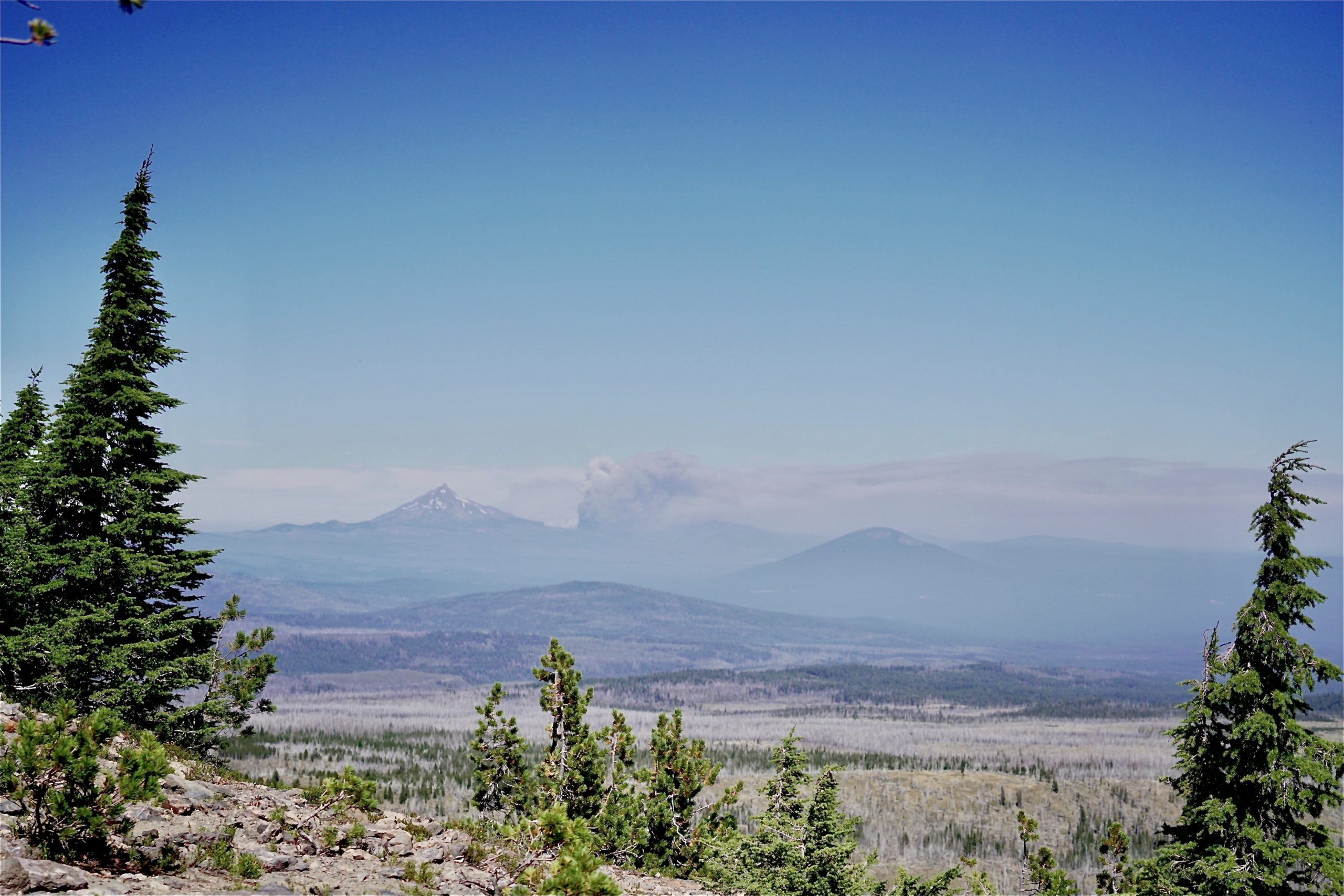 View of the 2020 Lionshead fire. Photo by Sydney Brehm.

The closest exit point to the fire closure is at Pamelia Lake, from where hikers can make their way to Highway 22. This route is logistically complicated, and there are several shuttles taking hikers past the fire closure leaving from Santiam Pass (highway 20), 28 miles south, according to a post in the PCT Class of 2022 Facebook group. The fire closure ends by Olallie Lake Resort at mile 2046, but many hikers may chose to return to trail at mile 2074 near Timothy Lake, as this is the closest paved road north of the closure.

DO NOT attempt to hike through the closure. It is dangerous to hike through fire-damaged trail before it is repaired and cleared for recreation. It damages the ecosystem to hike on fragile plants if you need to bypass damaged or obstructed trail. Rangers have revoked long-distance PCT permits and fining hikers $200 for illegally hiking through the closure, according to comments on FarOut.

According to the PCTA, there is no walkable detour. Connecting road walks along high-speed highways with little to no shoulder is dangerous, and would take several days to bypass a 20 mile section of trail. Zach Davis drove through this section in 2017 due to another fire closure, and described it as “a high-speed, twisting highway with no shoulder… this would’ve been one of the most dangerous parts of the entire hike, with no views to reward the ridiculous effort.”

The Lionshead fire was just a small component of the devastating fire season of 2020. During September 2020, the PCT was closed to all hikers in all of California and much of Oregon. Hundreds lost their homes and dozens lost their lives in rural communities throughout California, Oregon, and Washington. 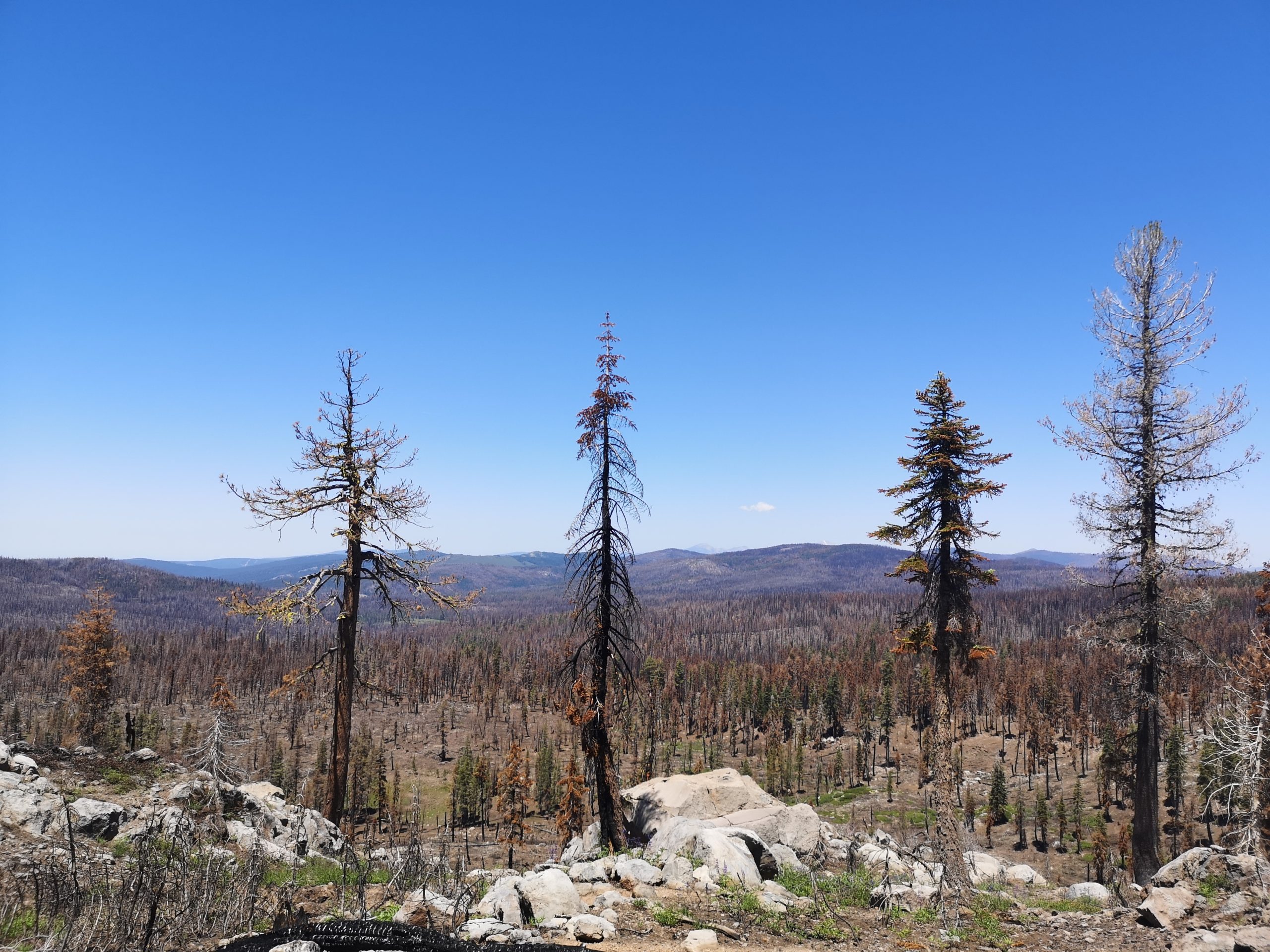 A year after the Dixie fire in Northern California, the burn scar stretches as far as the eye can see. Photo by Sofia Gellner.

The Lionshead fire was caused by a lightning strike. In general, lightning fires are important for the health of a forest ecosystem. According to National Geographic, “Historically, smaller fires occurred in forests at regular intervals. When these fires are suppressed, flammable materials accumulate, insect infestations increase, forests become more crowded with trees and underbrush, and invasive plant species move in.” This is the reason that wildfires have been getting larger, more frequent, and more destructive over the past decade. Prolonged periods of drought exacerbate the risk of fires in an already dry and flammable forest.

Even after the fire is contained, hiking through vast burn zones can be unsafe and unpleasant. Hikers may want to adjust their itineraries around avoiding fires, burn areas, and smoke. The coming years and decades could be a watershed in the health and resilience of ecosystems in the face of climate change. As the PCTA wrote last August, the trail may never be the same—and probably shouldn’t. The PCT will need to continue to adapt to the realities of a changing climate, and protecting the trail’s resilience may necessitate closing sections of trail to promote healthy forest regrowth.