Your Winter Inspiration For the Day: Meet Peter Freuchen

What’s the coldest night you’ve ever spent? For me, the answer is easy: on the shore of Chicken Spring Lake on the Pacific Crest Trail. At a shade above 11,000 feet, it gets awfully chilly up there, and the lone night I camped on its frozen shores was the longest and bleakest of my life.

Take whatever you answered to the question above and multiply that feeling by the first double-digit number that comes to mind, and you might begin to have some semblance of what Peter Freuchen’s life was like on a regular basis.

Before we get to the freezing-cold stuff, a little background info on perhaps the most interesting man to have ever lived:

Peter Freuchen was a Danish explorer, author, and artist, but you could cut all of that from his life story and still have books to fill. My personal favorite Freuchen anecdote–and trust me, it’s extremely hard to pick–is that he was captured by the Nazis and sentenced to death for his work with the Danish underground resistance during World War II. (Freuchen was himself Jewish.) Death wouldn’t find him for more than a decade, however, because he escaped his German captors and fled to Sweden. This, while standing 6-foot-7. With one wooden leg. Because he lost the other to frostbite, and amputated his own gangrenous toes.

The directors of the Fast and the Furious franchise would probably find this all “a little bit far-fetched,” but we’re just getting warmed up.

Speaking of, let’s get back to the cold, shall we? Freuchen spent years and years as an Arctic explorer, including a seven-year stint as the governor of Thule colony on Greenland. It was during his time in the Arctic that he achieved a feat that would have set the internet on fire, had it been around in his day. Trapped in a blizzard shelter in frigid conditions, Freuchen carved his way out with a dagger of his own making. Literally: it was a dagger made from his own frozen feces. 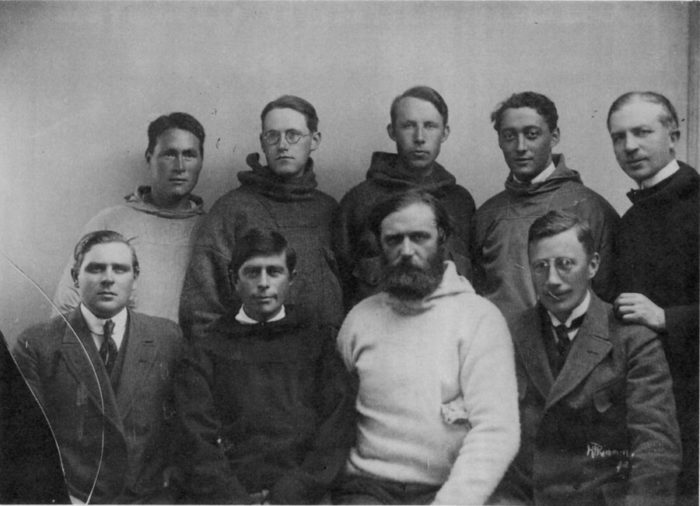 You can probably guess which one is him.

That may just be the single most batshit crazy thing a human being has done, ever. EVER. (No pun intended.) Pour one out for Freuchen the next time you’re feeling annoyed that you have to hunt for a good tree off-trail to do your business behind.

Any rational person would undoubtedly be scarred after an incident like that (remember: this was a man who had already lost most of a leg to frostbite), and perhaps never set foot out of doors again, but not Peter Freuchen. On a later research expedition, the walls of Freuchen’s small hut began to close in around him. Not metaphorically close in–they actually shrank around him because weeks and weeks of breathing into the subzero air caused ice to build up on the inside of his hut. It eventually grew so thick that he had to throw his woodstove out into the elements. By the time he was relieved of duty, there was barely room for his own body in the increasingly cramped space.

All of Freuchen’s later accomplishments–his career as a bestselling author, his influence on the European film industry, his friendships with everyone from indigenous tribal leaders of Greenland to Scandinavian royalty–seem to fall away in light of what was clearly his greatest talent: staying alive. He beat back the best and harshest efforts of Mother Nature and Nazi Germany, and that’s worth celebrating. The world has always needed trailblazing adventurers; there would be no thru-hiking without people willing to risk life and limb for the wilderness. Tip your cap to Peter Freuchen as the foremost among them.

What’s the most badass thing you’ve ever done outdoors? Sound off in the comments.