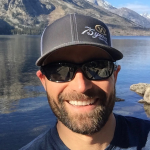 Blocked by Snow in the Sierra, We Flip Forward

I’m not going to lie, finishing the desert section feels great. I hate being hot, so starting early in the season for us was key to my desert survival. I was least excited for the desert section but surprised at just how diverse and enjoyable it can be. I have a newfound appreciation for how incredible and abundant life is in Southern California. 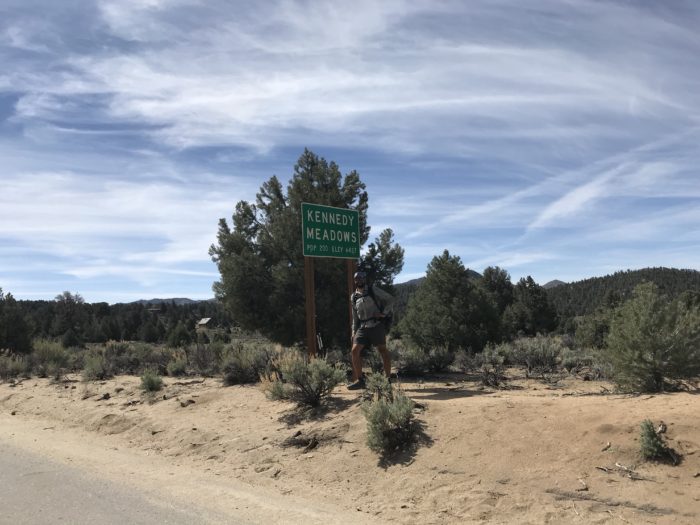 The colorful and boisterous birds, flower blooms in all colors, critters, snakes, lack of sand (that’s what deserts are right?), and numerous cactus and tree varieties were beyond my preconceived ideas of the desert. There are parts that I won’t miss: long, shadeless sections, heavy water carries, dry camping, extreme winds, and things that poke you.

The desert taught us how to handle extreme weather: snow, rain, sun exposure, high winds, and freezing nights. It’s like a school for becoming more confident in your skills and abilities as a thru-hiker. We have already learned that most of what the desert taught us is of little help now. The rules have changed now. Altitude, different weather patterns, colder temperatures in the teens and low 20s, increased food needs, fording creeks and rivers, and frozen water sources are all new but fun challenges. 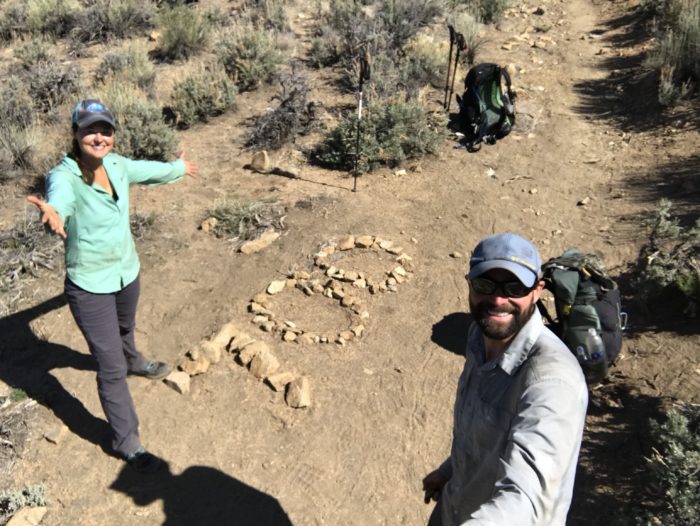 Our first days outside Kennedy Meadows brought on mountain views that we longed for. The desert still sneaks in the occasional cactus as you ascend, but slowly fades as you reach 10,000 feet. We feel much more at home in alpine settings. There is something comforting about pine trees, fresh mountain air, and granite.

We purposely avoided much talk of the snow conditions in groups to avoid any fear-inducing moments and question whether we should continue into the mountains. We want to see it ourselves and then decide. 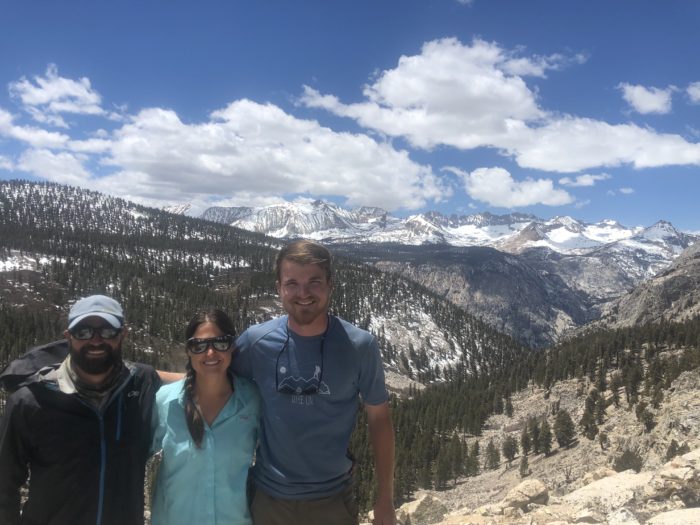 We checked the weather the night before our planned ascent of Mt. Whitney and it did not bring comfort. Snow and lightning were forecast in low percentages throughout the day. We made a tough decision after thinking about the climb all day to skip Mt. Whitney based on safety. We rationalized it to ourselves by saying that it is not on the actual PCT, which it brought little comfort to the letdown of not climbing it.

Since we skipped Whitney, we headed to a campsite at Tyndall Creek with the intent to go up Forester Pass the next morning. Just after fording the cold, swift creek the snow started to fly. It snowed for about an hour, pretty heavily at times until the sun came back out. It was sunny just long enough to melt the snow on our tent before the temperature dropped and more snow started to fly. We made a tentative plan to wait until the morning and check the weather again before deciding how to proceed. The current forecast had snow and the possibility of thunder. 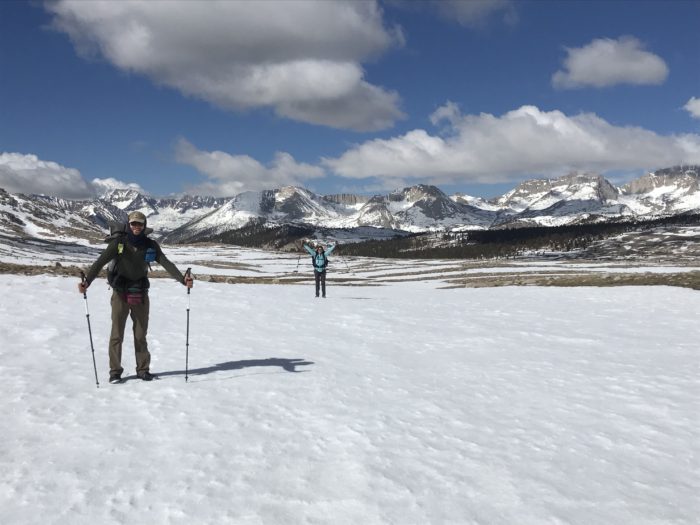 We had concerns that if we were being hit by snow, Forester Pass would also be snowy; we just didn’t know how bad the storm was higher up. We know how weather works in the Tetons and in the North Cascades, but not the Sierra.

The next morning greeted us with clear skies but the GPS weather forecast was telling us that more snow was coming, again in small percentages. Our gear was iced over and everything was damp or wet, and although we were comfortable, we had more big decisions looming. 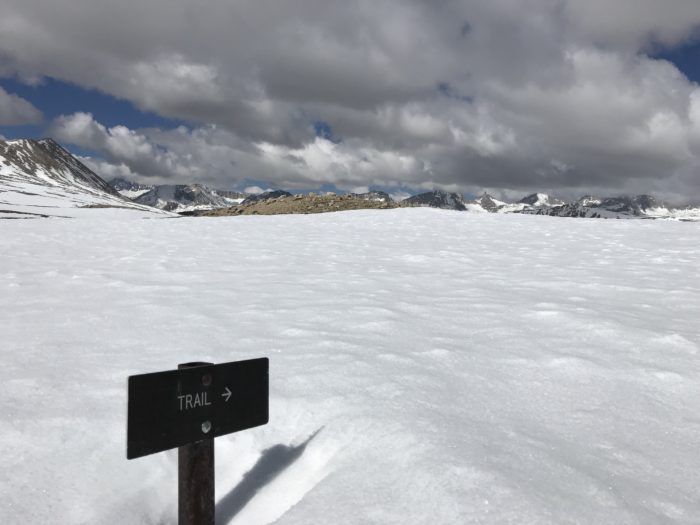 If we continue up Forester Pass we are committed to also doing Kearsarge Pass to exit the area. Learning of a possible side route, Shepherd Pass, that would let us exit without having to backtrack nearly 30 miles or tackle multiple passes sounded like our best option. We did some GPS work and route finding to navigate up to the pass. As we ascended, we saw the weather building and clouds moving in very quickly in all directions. At the top of Shepherd Pass we could only see about 20 feet as the clouds descended on us. It was eerily quiet; no wind, no birds, no marmots. We cast our eyes upon the route down and the trail plummeted as steeply as our plans. A snowy chute with only glimpses of the trail visible was not what we anticipated. 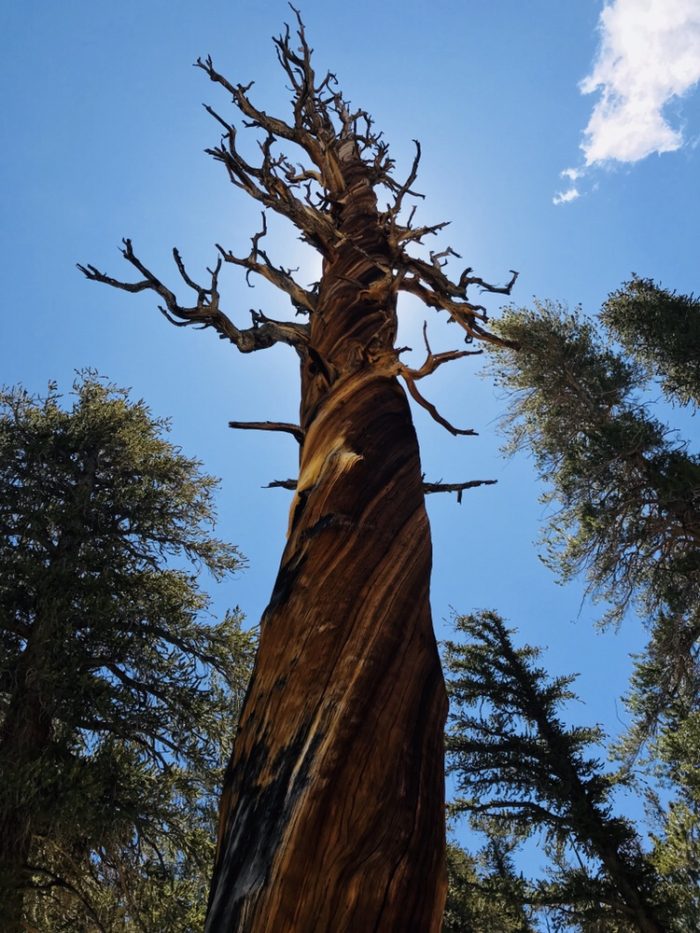 We turned around and discussed options as we headed back toward Tyndall Creek. The sky was full of dark clouds around us and flurries fell again as we found ourselves back at the creek. We decided that we should return to Lone Pine to resupply and take a zero. Another member of our group, Chris, was to meet his family in Mammoth. Sarah and I would do our resupply and rest up in Bishop while he did.

Did we make the right decision?

These decisions make you second-guess yourself when you see others continue on after you have turned around. People in front of us on trail and behind summited Whitney and crossed Forester Pass. I’m not sure how much knowledge they had of the weather, or their level of experience. I do know my past experiences; mistakes and knowledge steer me toward being conservative when it comes to weather in the mountains.

A quick change in plans from Chris means Sarah and I are heading back to Horseshoe Meadow to try Mt. Whitney and Forester again. After running into fellow hikers and learning that they are hoping to summit Mt. Whitney the next morning, we decide to push the 22 miles to camp instead of the 15 that we had planned. As we hiked, the snow and thunder were around us, with thunder increasing in frequency for nearly two hours. Just before climbing Guyout Pass lightning flashed and thunder boomed as the snow started to engulf us. The thunder and lightning were getting closer and we decided to hunker down and let the storm pass.

We sat huddled together under a Tyvek sheet as the marble-sized hail started to intensify. Lightning and the quickly following thunder (now only about two seconds behind the lightning), were overhead for about 40 minutes. Finally, the storm backed off some and we decided to venture up and over the pass as quickly as possible. It snowed for only a brief time afterward and then the evening skies cleared up. 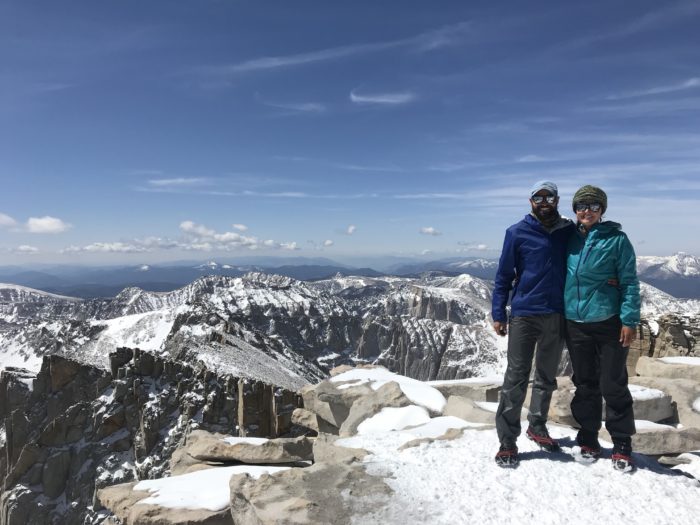 We awoke at 4 a.m. and decided on a hot breakfast, which also gave the sun some time to rise and help light our way. We knew that the weather patterns for the Sierra are generally clear mornings until about 11 a.m. and then clouds start to build. We left camp at 5:30 and, after climbing for five hours, reached the summit of Mt. Whitney under clear skies. After a short stop on the summit we could already see clouds forming on the east side of the peak and way off to the west. We started to make our way back down, and even with a short stop at Guitar Lake to eat, we made our way back to camp in only three hours. 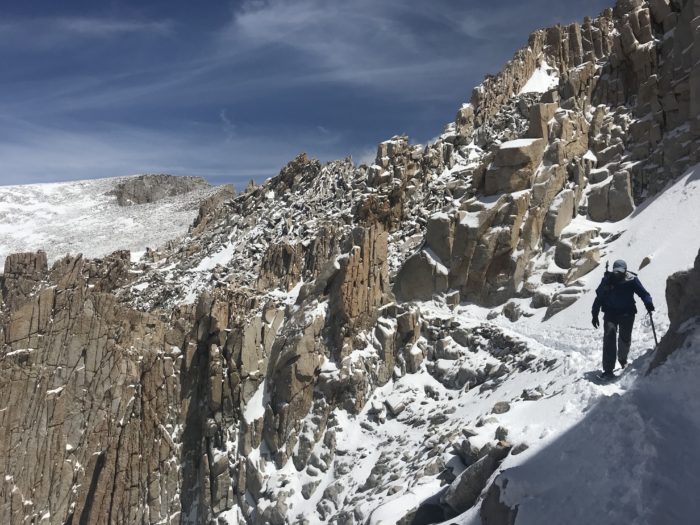 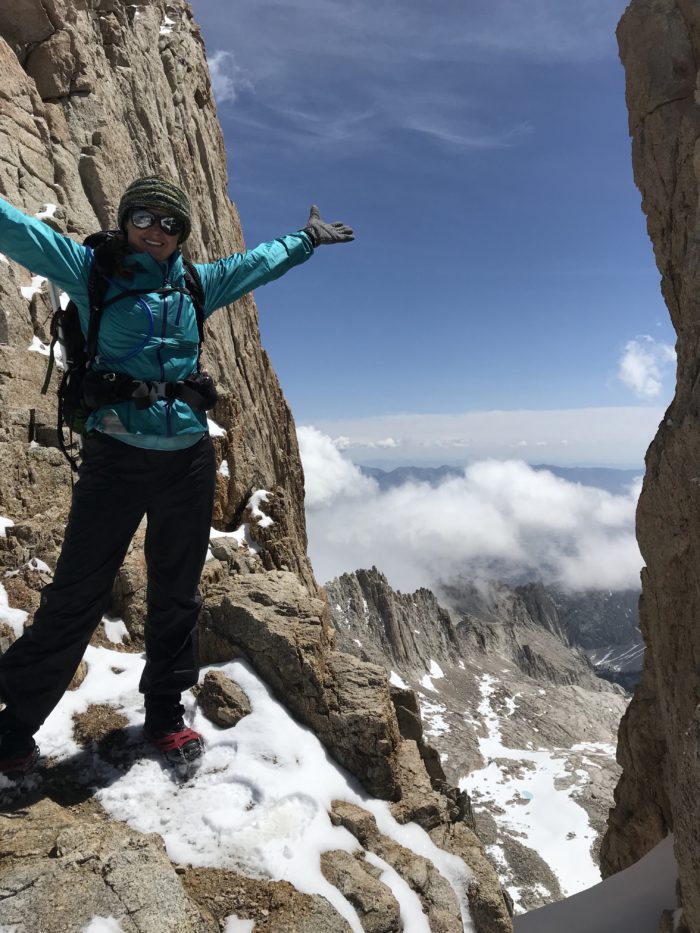 We woke up the next morning to clear skies but that didn’t last long as the ominous gray clouds moved in and flurries began to fly. The first few hours were intermittent snow, but that was not to be the theme for the day. As we pressed on, so did the weather. The snow became a sideways-blowing whiteout at times, and it was now starting to accumulate. By the time we reached Tyndall Creek (our camping destination), six to eight inches of snow covered the ground.

Having been to Tyndall Creek before, we knew going upstream was our best place to ford the creek. Tyndall Creek is a swift-moving creek and would be a river in many areas. Our shoes were wet from slush and snow, and taking off our shoes to ford did not sound appealing to either of us. I confirmed with Sarah that we should cross and she agreed that we should cross and set up our tent. As we looked at the creek, large clumps of slush were flowing past and heavy snow flakes continued to drop. We found a braided section that was about 25 feet wide and maybe mid-shin deep with some great clumps we could step on to help cross. We quickly took off our shoes and socks, trying to stand in the snow for as little time as possible. 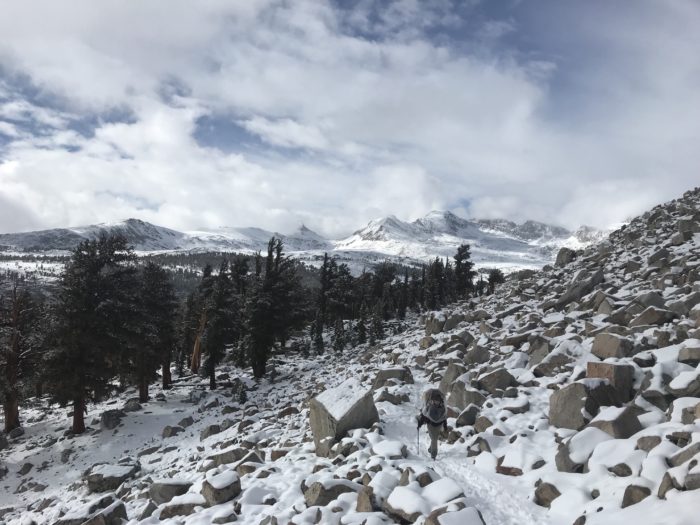 I have done a lot of wet wading while fly fishing and the cold water doesn’t bother me too much anymore. However, stepping into the water I certainly found it to be colder than the other crossings we had done. The focus needed to cross the creek took away the sting of the icy water. Once reaching the other side you are greeted with snowy banks; quickly dropping your pack to deploy a ground cover sheet to dry your feet is all you think about.

By the time we hiked back to the campsites only a few minutes away, our feet had already forgiven us for yet another stream crossing. 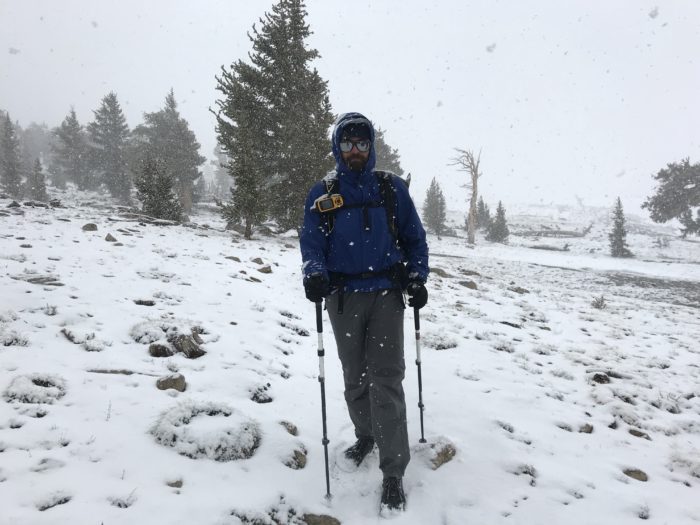 This would be as close to Forester Pass as we would get for a second time. We met other hikers who reported even deeper snow at the approach and the trail completely covered in snow. Sarah and I had concerns about avalanche danger and breaking trail through a notoriously tricky section of trail. We were invited to start hiking back to Horseshoe Meadow with another group and agreed to head back with them in hopes of keeping our morale a little higher. It was deflating to have to turn back yet again. The other hikers had found a rock hop to navigate Tyndall Creek but Sarah and I were hesitant. A big step onto a less than stable rock was needed to cross. Nerves of steel and a little bit of adrenaline helped get us across the sketchy crossing safely. 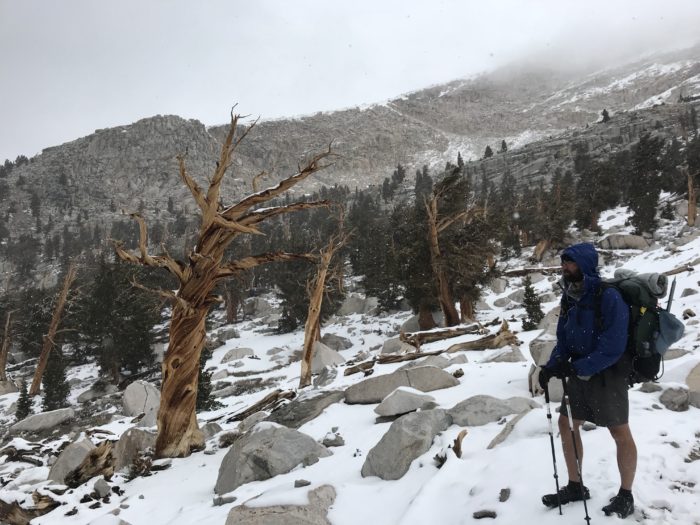 We all hiked about four miles then set up camp and called it a day. Sarah and I awoke early knowing what the day would entail: a 24-mile jaunt that we have done once before. It’s always tough to go backward on trail, especially when you want to be going forward. We covered nearly 120 trail miles without really moving the pin on the map. That’s frustrating as a hiker and doesn’t really show the output of energy and effort over the past week.

Ultimately, we decided to flip farther up trail to avoid the snow. We don’t have any regrets, but it’s not how we envisioned our hike going. We will return to hike the Sierra later this summer when we are able to enjoy them, not suffer through them. The PCT evolves around countless barriers and each hiker must decide how best to proceed when issues are presented. We have learned to be flexible, adapt and be decisive in our choices. 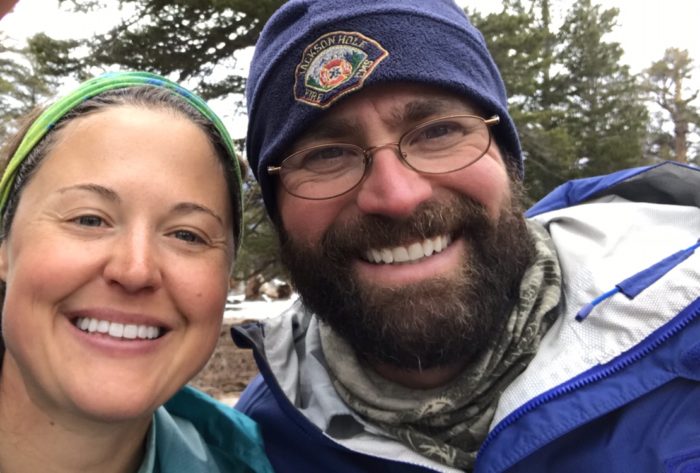 After years of dreaming my wife Sarah and I are starting our PCT thru hike in March 2018. Together, we will combine our super powers and tackle all the PCT has to offer. With the help of an occasional oatmeal cream pie, of course. Follow along as we aim to offer an honest and transparent look at what hiking the PCT is like!