Relaxing and Then Back to Sierra Hiking (June 1- 4) 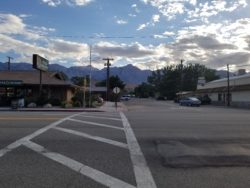 View of the Sierras from Lone Pine. What a town to live in, to see those mountains every day!

June 1- On this day, the goal was to hike towards the desert town of Lone Pine, and take a much-needed rest break for a few days.  The towns along the Sierra stretch of trail often require you to hike several miles down a side path to a parking area or campground, then secure a several-mile car ride down out of the mountains, to the desert far below.  On a good day, day hikers and campers are milling around in the parking areas, heading down the mountain, so it’s not too hard to find a ride down there.

On the way down the side path down to Horseshoe Meadows parking area, I met a hiker coming back up to the PCT, who had stayed in Lone Pine.  He was so kind to me.  He asked me if I was headed to Lone Pine, then spent several minutes telling me about the town, the hotel he had stayed in, how to get there, what shuttles I might use to get back.  He really explained things, and he seemed refreshed, after his stay in town!  It was all music to my ears.

While we were chatting, another hiker passed us, also heading down the mountain.  I hurried to catch up to him so that we could attempt hitching together.  He was nice and chatty, and much to my relief, once we got down to the parking area, we got an offer for a ride right away, from a day hiker.  We also picked up a few other hikers on the way down the mountain.  The road was windy with sheer drops visible on the roadside, and we drove roughly 26 miles to get down to the desert floor and the town of Lone Pine!  I tried not to worry too much about how I would get back to the trail, when I was ready.

It was nearly 100 F (!) down in Lone Pine, and we were down at 3000 something feet.  A big change from 10000 feet and temps in the 70s.  It was a great town for the hiker, though- main street full of restaurants, and a reasonably priced hotel, a grocery, and laundry all located near one another.  The hotel and town are very Western movie-themed, because of many Westerns having been shot there, back in the day.  Interesting place to see.

For the rest of the day and the next, I spent a lot of time eating out, going out in the heat to do different tasks, contacting home and friends, and coming back to my room to relax.  It was so needed and enjoyable to have an entire two days to eat, rest, get a few things done.  Sleeping in a bed for two nights was the best feeling in the world!

Once I got back to the trail, I took it easy the next few days, breaking when I wanted and accepting more frequent breaks as a new pattern, for now.  The scenery continued to be grand all around, with alpine lakes, limited amounts of snow on the mountainsides, wide meadows, pretty pines, rushing creeks.  As I hiked back up to the trail from the parking area, after my stay in Lone Pine, I looked at the same scenery I had seen just a few days before and thought about how revived I felt compared to when I had hiked down there.  I met a few hikers coming down, and smiled at them and told them all about Lone Pine, answered their questions and gave suggestions of places to stay or eat, told them that it was a great town to relax in, just like the hiker who had helped me when I was in their shoes.

A few days after my stay in Lone Pine, I woke up in the morning with the intention of reaching Mount Whitney that day.  Mount Whitney has a reputation along the PCT, because it is the tallest mountain in the contiguous United States, and PCT hikers have the opportunity to hike it.  The PCT does not go over Mt Whitney, but runs very close by it, so PCT hikers have the opportunity to hike it in a day, and then return to the PCT if they want.

Mount Whitney’s summit rests at 14505 feet, and I heard plenty of warnings from others that hiking it is no joke, that it’s not uncommon to experience some altitude sickness during that hike.  Usually, symptoms are limited to a mild headache or nausea, but some experience more severe side effects.

Many hikers camp around 10500 feet, at campsites near a path that leads up to the summit of Mount Whitney, before summitting.  I did this, though I did not wake up that night at midnight to hike up for the sunrise, as many around me did!

The day before summitting Mount Whitney, there were so many other hikers camped in that area by Mount Whitney.  There had been an afternoon thundershower that afternoon, so many of us had crawled into our tents to nap and stay dry.  The storm cleared, and people started milling about, collecting water from the stream, chatting, cooking dinner. 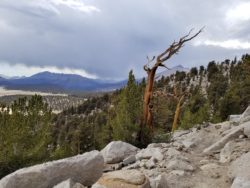 I wandered around and saw a few familiar faces, surprised to see hikers I hadn’t seen for quite some time.  There had been fewer trail registers lately, where hikers can sign in along the trail, so it had been more challenging to gauge which friends are behind or ahead of you.  It was such a joy to have friends nearby again, and compare stories of our experiences in the last week or so.

I had missed seeing friends since Lone Pine.  I alluded to that with one of the friends, telling him about a couple I met who are constantly doing thru-hikes.  I told him that I don’t think that’s for me, that after a while, the views don’t touch me as much anymore.  He laughed and said, “Yeah, it’s like, great, another great view, what do I do with this?”  But I think maybe he was just being sympathetic to me, because later he gestured to a far mountainside in the fading light, with snowy patches, and said, “How could you (generalized you) ever get tired of this?”, and looked awed. 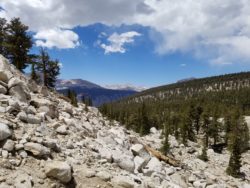 I went to sleep that night, happy to have two familiar friends nearby, and excited to likely be hiking around them again in the coming days.  No one could complain about the views in this section, but having friends by at times to share it with is an important piece of the experience.