Even at lower elevations, views from the Arizona Trail were impressive – there were no pesky trees to get in the way. There was also nowhere to hide from the sun, so I’d get up at least half an hour before sunrise, and take less than an hour to break camp. By the time I started hiking, there was enough daylight to spot any rattlesnakes from a safe distance.

For the first few days, I avoided the midday sun by taking a two-hour break around noon. I carried a three ounce tube of SPF 30, and at the first sign of sunburn, applied sunscreen liberally to the affected area. Not a dermatologist-approved method for building up a tan, but effective enough that I soon stopped worrying about burning. After a few days, I delayed my breaktime until later in the day, and sat out the hottest part of the afternoon. Often, I’d siesta less than a mile from where I intended to camp, simply because I knew my chosen campsite probably didn’t have shade.

At sunset, the clear, unobstructed sky allowed me to observe the progress of the moon as it waxed its way east. Before sunrise, I’d watch Venus and her three planetary companions appear in a diagonal line above the horizon. Over the course of several days, the Morning Star’s position relative to the other planets changed noticeably. As I proceeded north, each night shortened by a few minutes. I started getting up earlier, and my routine soon became second-nature. Hike, sleep, repeat.

Ugh. There’s a cow in my drink

On the desert section of the PCT, I scouted out potential water sources several days in advance. That meant checking the Farout comments for every upcoming waypoint, just in case, for example, there was a cache at a road crossing.

Farout’s waypoints for the AZT aren’t yet as comprehensive as they are for the PCT. (There’s a notable lack of waypoints marking established campsites, for example.) However, the hikers ahead of me didn’t let that stop them fully documenting the trail. They simply added their comment to the nearest waypoint. Many times, I’d select a “pointless” waypoint (e.g. a gate) and find that someone had added a useful comment. Something like, “Large puddle 1.2 miles NOBO.” 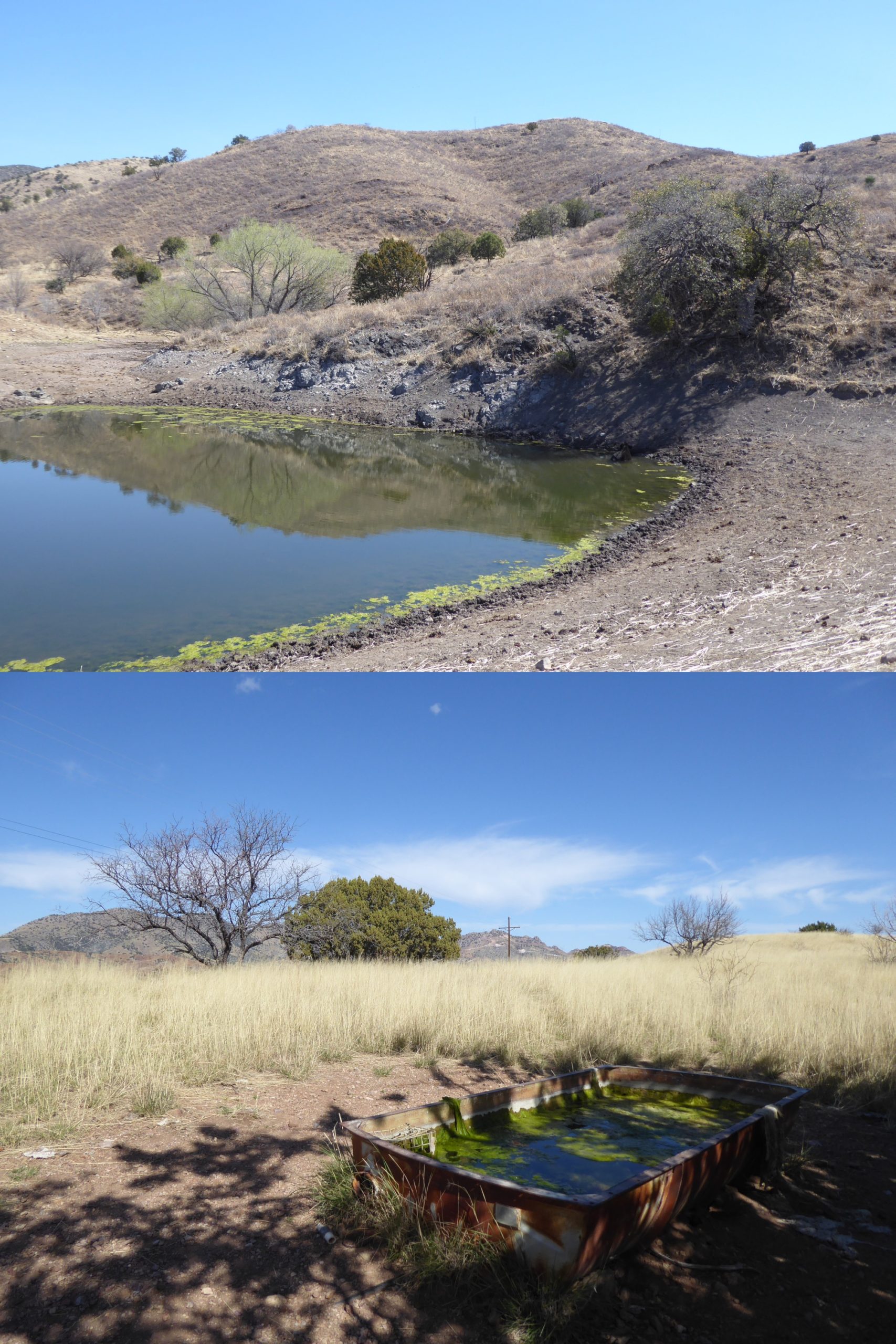 By scouring the comments, and carrying extra water when necessary, I was able to avoid refilling at the AZT’s worst water sources. I skipped several that were more cow than pond. It took less than a week before I started taking water for granted. Crossing beneath the I-10, I was reminded just how tenuous a desert existence really is.

I was still two miles from the next water source (Cienega Creek) but was thirsty enough that I couldn’t wait. Fortunately, I’d judged my water requirements perfectly, and I still had just enough to fill my water bottle. I filtered my remaining water, gulped a mouthful, and carefully placed the bottle on the ground. I didn’t bother to screw the top back on just yet. As I put my Vecto and filter back in my pack, I was blasted by a gust of wind coming through the I-10 underpass. It had enough force to knock my trekking pole over, which was leaning against the smooth concrete wall. With military precision, the handle of the pole hit my (wide-mouthed) bottle, and it instantly glugged its contents onto the sand. After that, I handled my water with the care it deserved.

I only sent myself one resupply box on the AZT, which I collected at Colossal Cave Mountain Park. There, I met another NOBO hiker (“The Sheriff”) who’d shipped his package to the park via USPS. The USPS doesn’t deliver directly to the park, so The Sheriff had to resupply from the hiker box instead. He had only four weeks in which to complete the AZT, so he couldn’t afford any delays.

I hung out for a while, chatting with The Sheriff and two other hikers while I repacked my bear canister. By 10 AM, I had a nagging feeling that I’d delayed my departure as long as possible. I left the shade and camaraderie behind, following the AZT north along a hot, dry wash. Beyond Rincon Creek, the undulating trail turned steeply uphill on a south-facing slope with no shade other than the occasional Saguaro cactus.

Apart from the Grand Canyon, Saguaro National Park is the only place on the AZT that requires a permit to camp. Camping is limited to designated campgrounds, and I’d reserved my site at Grass Shack Campground the previous day. I arrived late in the afternoon and camped in a small site, just a few feet from the creek. I fell asleep to the sound of running water, and completed the climb up Mica Mountain early the next morning. It was cold and breezy at the top, almost a vertical mile above the scorched desert floor I was about to descend to.

Two sweaty days later, the weather forecast was predicting that the mid-nineties temperatures would drop back to normal. I started the final section of the climb up Mount Lemmon at sunrise. Although I couldn’t actually see the sun, because I was on the southwest side of the mountain, the Farout comments assured me this was not a pleasant climb in the afternoon. I raced to stay in the mountain’s shadow, and reached the tree-line not long before the first rays of sun reached me.

By now, I was starting to appreciate the vast difference between Arizona’s sky islands and the low desert that separates them. Mount Lemmon was no exception. It was a cool, tree-covered oasis, literally overflowing with springs and seeps, creeks and pools. I thoroughly enjoyed picking my way from cairn to cairn, following the often faint, but always picturesque trail. Residents of Tucson are obviously also aware how pretty this area is, because I soon started meeting plenty of them coming the other way. The closer my proximity to Summerhaven, the thicker the Saturday morning crowds became.

Gathered in the shade outside the “Mount Lemmon General Store and Gift Shop” were a group of five NOBOs. “Steggie” was one of the hikers I’d travelled with from Tucson to the southern terminus. I’d passed “Samwise” just before the summit of Mica Mountain. It was my first time meeting “Van Gogh”, “TVP” and “Dozer” – a group of three friends from Florida. When discussing how warm the past few days had been, I was careful to avoid the old cliché, “but it’s a dry heat.” While I ate my ice cream, drank my sodas, then consumed the snacks I was saving for later, everyone compared notes on the trail so far.

After almost two hours, I said my goodbyes, bought more snacks, and headed for the Sawmill Run Restaurant. Then I discovered that I wasn’t actually that hungry. Also, the place was packed, and I still had miles to cover. I left town and headed in the direction of Oracle Ridge. 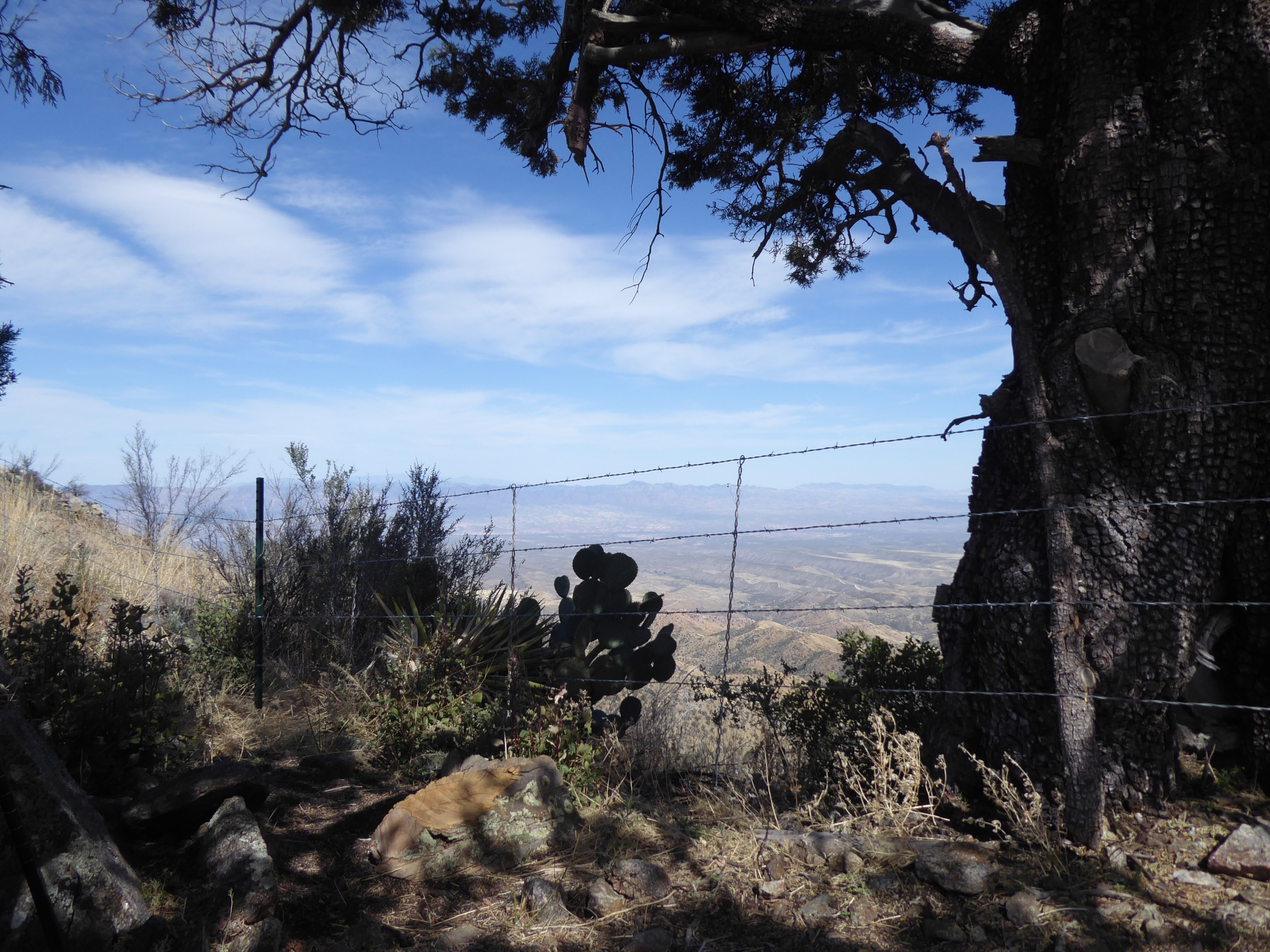 Taking a break on Oracle Ridge.

Change in the weather

Sure enough, the meteorologists were right. The wind picked up, and the temperature failed to reach its recent highs. At a saddle with very little cover, I pointed my tent into the wind and piled rocks on top of each stake. It would be a very blustery night, but all that airborne dust did make for a dramatic sunset.

During my three-day-dash across the lowest section of desert so far, the temperatures were typical for mid-April. My only problem was the unrelenting wind: it rarely dropped below about 30 mph. I camped in a dry wash each night, because (a) washes were plentiful, and (b) they were the only places offering even the slightest shelter. No matter how many washes I crossed, I always looked both ways. I’m still not sure why. Perhaps I was half-expecting to be run over by an inattentive driver. I did encounter my only rattlesnake in Ripsey Wash though. A short, fat, Western diamondback who rattled politely at me from a patch of shade beneath a tree.

On day four, I again woke up under a fine layer of dust, but found that the wind had vanished during the night. Cold air had settled into the wash, so I hiked quickly in order to warm my hands. I was also motivated by the thought of reaching Kearny, my first trail-town. At the Florence-Kelvin trailhead, I left the trail and walked to the highway. With my hitching thumb at the ready, I found a patch of shade beside a small, metal shed. Then, I waited. 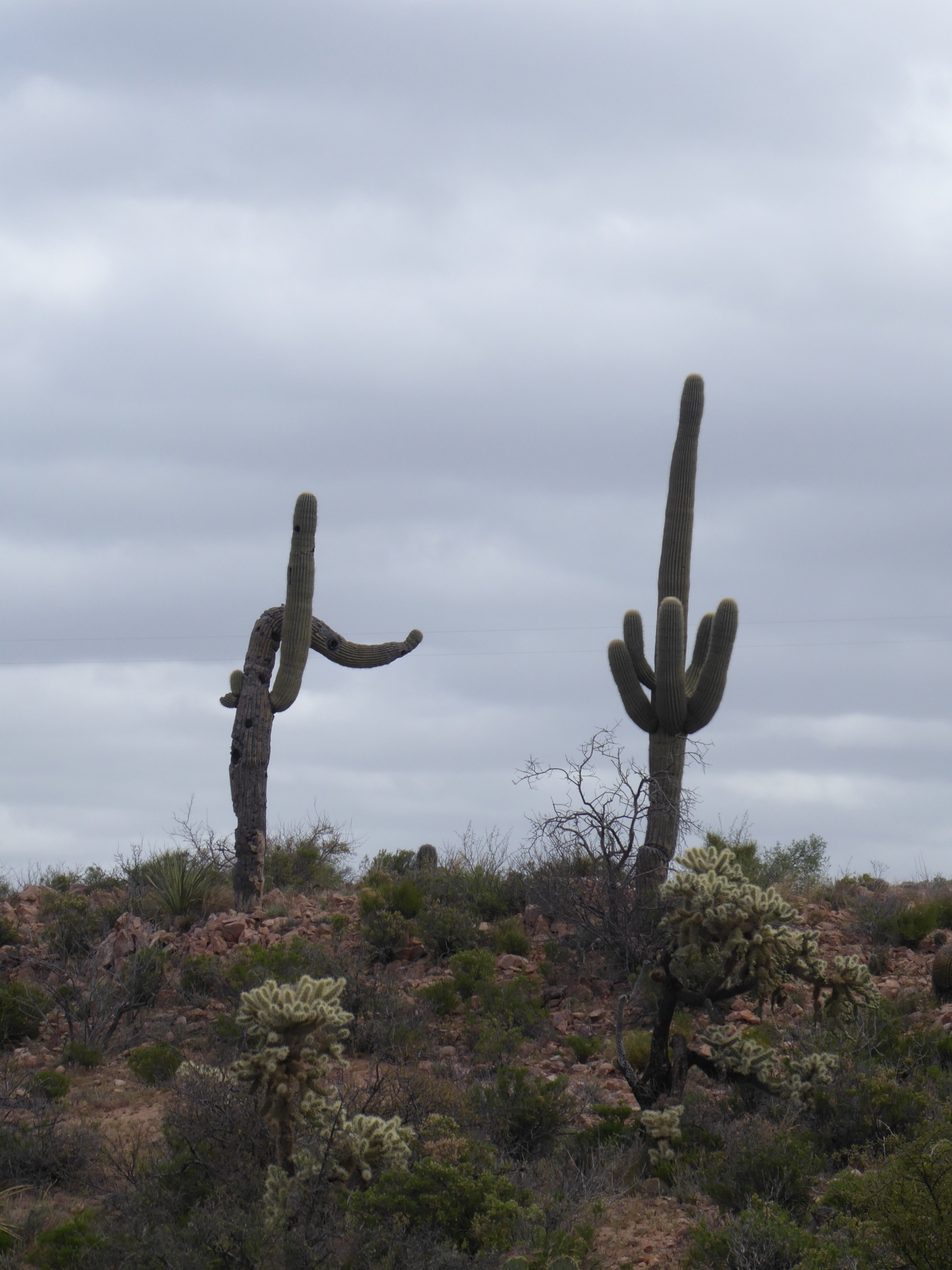 Saguaros sometimes need a ride too.