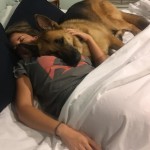 Once I tell people about my plans to hike the PCT, the conversation always makes its way to the same place, “Who are you going with?” I always crack a smile, already knowing what they’re response will be. “Kona”, I say. “Your dog, Kona?” “Yes” “Okay… but I mean people wise… who are you going with?” “Just me and Kona.” This response is usually flooded with, are you crazy? You’re a young girl, you can’t be serious, right? Or, so how pissed are your parents?

Never the less, it’s true. And to be honest, that’s really how I prefer it. Every big hiking or camping trip, outside of a select few, have always been just me and Kona. I figured I would get the “bringing my dog on a thru-hike” argument, out of the way on my first post, and maybe shed a little light on why she is so important to me. Especially considering she will be mentioned in most all of my posts. So, if you’re not a dog lover, get out while you still can (joking… sort of).

I would like to keep this next part short and simple, considering I’m new to the blog community and I don’t know how comfortable I feel with sharing certain parts of my life just yet.

It all started in the beginning of summer 2015, my best friends from high school and I met up for a girls night out. After awhile we were all exhausted and as usual, I called an uber to head home. I waited for awhile. I kept calling and in his broken English, the driver kept telling me he was around the corner. Eventually a middle eastern man pulled up and I asked, “Are you my uber?” He said yes, and without hesitation, I got into the car. Keep in mind this was before they had to display the trademarked uber sticker on the window.

We started talking and after awhile I noticed his accent, that was so thick on the phone, was no longer present. Soon after he started going down a road that, despite my terrible directional skills, I knew was the wrong direction. When I finally asked him, he said he just needed to use the restroom and then pulled into an empty lot on the water. Almost instantaneously, he locked the doors, lunged into the backseat, and pinned me down. My only thought was that this was it, he would have his way and then dump my body in the water, that’s why he brought me here. I fought like hell. He eventually got tired of wrestling with me, and let me go. He fucking let me go. I can only feel incredibly lucky that the end result wasn’t worse. Police and detectives checked traffic cameras, started an investigation with uber, I worked with a sketch artist, and unfortunately, he is still wanted for abduction and sexual assault.

I didn’t leave my room for about a week. I couldn’t go anywhere without looking over my shoulder thinking that he would be there, knowing I had gone to the police. I had nightmares every night, and fell into a deep depression. After some time had passed, I knew I couldn’t let him win, and had to do something to take my life back. I started playing with the idea of getting a dog for protection, and shortly after I started fostering a German Shepherd from a rescue in Ft. Lauderdale (I wanted to make sure I was ready for such a large commitment). After 5 days I called the shelter and told them I would be making her a permanent member of the family. I named her Kona, and our life together began. She helped me cope and get over my fear of what lie ahead, she never left my side. That was the hardest summer of my life and I honestly don’t know where I would be now if I hadn’t of adopted her.

I think after awhile we both found our purpose in each other’s lives. I nursed her back to health from starvation, abuse, and an extreme case of mange. After several months of training she became my service dog, not my protection dog; although she did chase a man out of our house who tried to break in last year (which was epic). She helps guide me through anxiety attacks, panic attacks, and occasional depressive episodes. You can ask just about anyone who knows me, I do not feel comfortable being without her, and bring her just about everywhere I go.

I felt this story was important to get out of the way. I would like to focus on happier times, my upcoming training and eventually the trail itself. This is more for the people that don’t understand why I feel the need to bring her. I realize a lot of people aren’t fans of dogs on the trail and don’t think the dogs can handle it (I’m sure some cannot). No offense to those people, but Kona can out hike any person I know whether it’s in 95 degrees or 20 degrees, and yes she has done both. She’s also more well behaved then most people I know. I may rely on her a lot of the time, but I genuinely believe she deserves to experience as many amazing things as I do. She gave me my life back, and for that, I owe her the same.

PS. Sorry for the terrible grammar but let’s be honest, it’s not going to get much better. 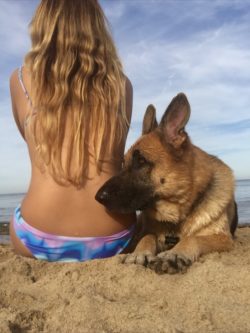 Brook and Kona here. Just a girl and her dog on a mission to see the world. We will be hiking the PCT in April 2017, and couldn't be more excited! Born and raised in south Florida, I recently moved to San Diego and fell in love with California. My goal: to see everything the west coast has to offer.