On this day, the trail crossed up and over some of the most beautiful mountains I’ve seen in a while.

I had planned to get up early to beat the morning mosquito rush, but I just couldn’t do it.  I sleep so well in the morning lately!  I started stirring around 0600, and as I packed up, I could see the mosquitos starting to accumulate around me, in response to the sun’s rays.  It was both disheartening and fascinating, to see how quickly they responded to the very first of the sun’s warm rays.  I was fully clothed in long clothing, and even put the bug head net on after they kept flying by my ears, whining.

I walked through clouds of mosquitos along Dorothy Lake, on my way up to the Dorothy Lake Pass.  A mile in, I followed the comment on our navigational app (guthooks) about Verizon service being available on trail.  Sure enough, even though to my eyes I was still surrounded by wilderness, I did have service there.  I was glad that a hiker ahead of me had gone to the bother of commenting that at mile something point something, you might have phone service.  Phone service has been limited lately.

I continued to hike in mosquito territory, meeting a southbound section hiker a few miles in who told me the mosquitoes would die down a few miles ahead, at Walker River.  Another hiker couple had told me the same the day before, so I felt hopeful.  I’d have enjoyed talking with this hiker longer, but we were both swatting and restless within a moment or two.

It seemed it was only a few turns and twists after that, that I walked around a hillside only to notice the air fresh and still, seemingly clear of the hordes.  It felt like a miracle, to just make a few turns, and find the air mosquito-free!  I took a long breakfast break there, and though there were still mosquitoes around, you could tell they were diminishing.  By Walker River, the air was clear and my spirits were so vastly improved, as if I could breathe again.  Feeling I can walk unharassed in shorts and rolled up sleeves on a hot day does so much for my spirits.

I chatted with a hiker at a small creek, as he ate and I filled up on water, at what we thought was the last water source for the next 10 miles.  He was quiet and kind, had a very calm way.  I told him my knees were still sore, and he said, “Yeah, yesterday going in and out of those canyons was brutal!”  Hearing someone else acknowledge how tough that day was, did a lot for me!  He also agreed the mosquitoes had been bad.

I started the climb up mountains headed toward Sonora Pass.  I guess you’d say, hiking through Emigrant Wilderness, and up near (but not directly to) Leavitt Peak.  The scenery was wonderful and refreshing because it was so different in this section.  Instead of granite mountains, these mountains were covered in orange-brown-tan debris, and somehow so beautiful for it.  I don’t know the exact geological history of these mountains, but my guess is that these mountains were shaped and/or impacted by past volcanic activity.

The trail climbed a few thousand feet up to nearly 11000 feet, on sometimes sandy, sometimes dry and gravelly, sometimes scree path.  Usually a gradual grade, but so very open, with only a few trees and hardy flowers growing on these volcanic looking mountains. 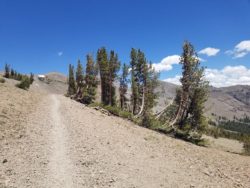 A few hardy conifers, windblown, somehow surviving on the mountainside. 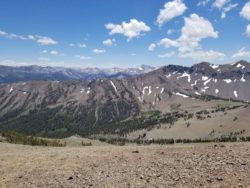 View of snow covered mountains of Yosemite, behind us. 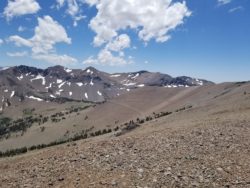 The PCT stretching out across the mountain. 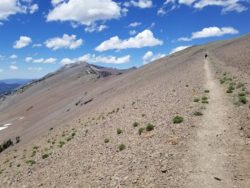 I took frequent breaks once I got up to the ridgeline, soaking in the sun’s beam on my skin up there, enjoying a steady cool breeze too.  It was so neat to look back and see a large swath of Yosemite mountains, high with snowy patches.  Beautiful views.  Mountains all over, kind of looking down from Mount Whitney.  Some sandy white, many green, some orange.  I looked at Yosemite and wondered where we’d been among those mountains and canyons, and felt really glad to be done with hiking through there!  Some good moments I’ll take with me, but the mosquitoes and the solitude!

The hiker I’d seen earlier caught up to me, and looked around for a while, saying, “Wow, I don’t know what I expected to see up here, but it wasn’t this!”  I agreed.  Then he hiked on, saying, “Now to see what other surprises this day brings!”  He was struck by the beauty.

Descending these mountains kind of scared me.  Loose scree and pebbles, and a trail bed that sometimes tilted towards the steep mountainside and drop below.  It would be easy to fall there, and really terrible if you did.  A few times my shoes skidded on pebbles, so I really took my time and stepped with care on the sections that were more eroded. 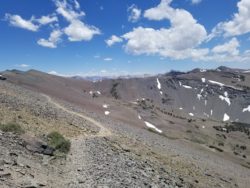 Yosemite mountains behind this ridgeline. 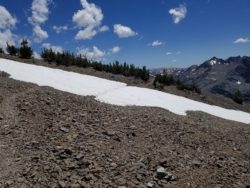 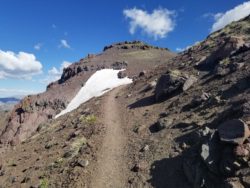 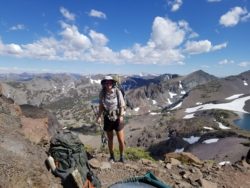 I hiked down to a pretty camp site, sunny and nestled among some pines, and conveniently close to the parking area for tomorrow.  (I plan to take a shuttle to nearby Kennedy Meadows Resort and Pack Station for a break tomorrow.)  It’ll be a relaxing day, I hope.  For one thing, no shuttle until 1030, so I can sleep in, guilt free.

I’m glad for ongoing new views and landscapes, which I wouldn’t have imagined before this.  The adventure continues.