In my previous post, I addressed a serious situation and left off with mixed feelings about the Sierra section of trail. I was about to cross a dangerous creek before heading up to Mather Pass, and began to re-evaluate how I would choose to continue north. Since I will only have service for a limited time, I am publishing two posts in a row, with this being the second. If you haven’t read the first, it may make more sense to go back and read that before readi. 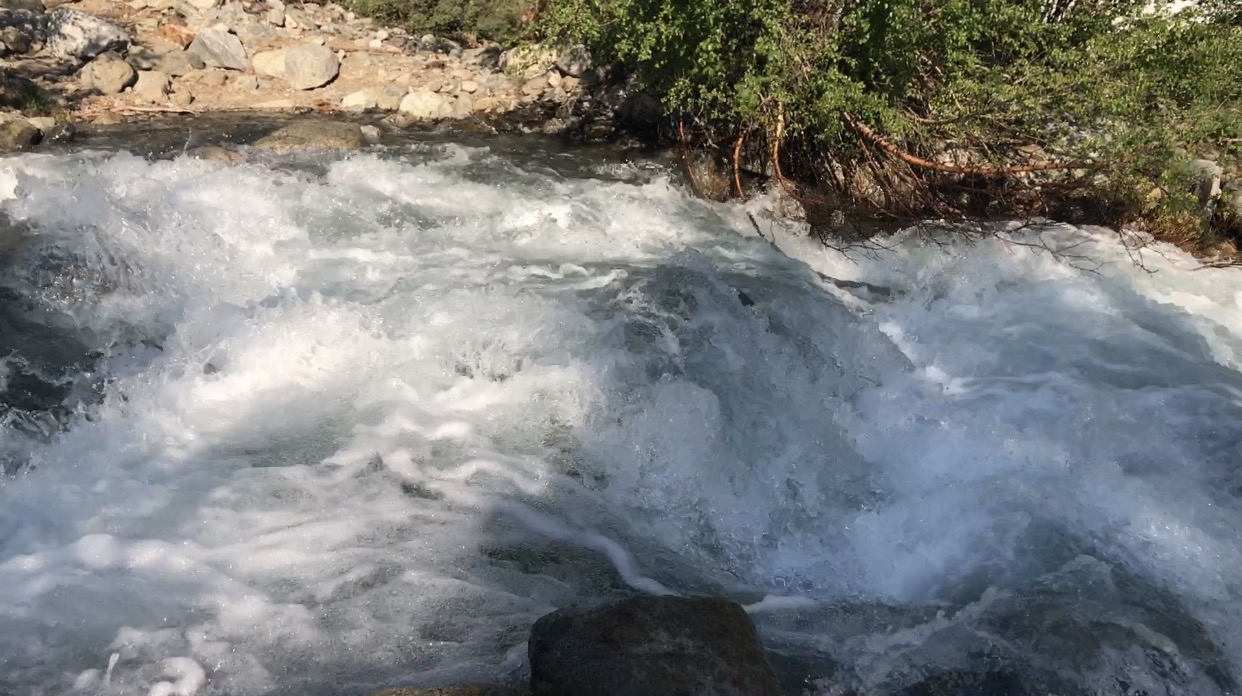 Where I left off was just before crossing White Fork Creek.

I woke up, surrounded by five other hikers who were also attempting to cross the creek (photographed above). I still get chills looking at the photo. It was white water. We couldn’t see the depth, and what you can’t see is just to the right of the photograph, how the current drops off into a waterfall that leads straight into the larger Kings Canyon River. Anyway, I woke up. I packed up my bag and joined the fellow hikers. Henri showed up across the way and helped direct us from the north side. Initially, we were planning on all linking arms and crossing in a group of 6. These plans changed when I, the third in the chain, nearly lost my footing and realize I was not stable enough to support another hiker. So instead, we crossed in two groups of 3, which worked well. Each group decided to link arms and cross at a downward angle (as we had read/watched/heard about), but ultimately, we wound up just holding hands. This strategy definitely provided less physical support, but the most emotional support I could have imagined. And luckily for all of us, we made it through safely. As a team. Soaked to our waists, we then hiked .3 miles to a campsite where we all dried off, ate breakfast, and finally introduced ourselves. With the exception of our one friend, I didn’t even know the remaining hikers that I had crossed with, yet without exchanging words, I had experienced an unexplainable sense of trust and teamwork in the matter of a few minutes.

Their names are Larry, Cosmo, Ya ya and Utah Aaron. Happy Baby, who we have been hiking with for a while, was there with us, too.

I wondered if I’d even get to know them well. They seem great, but I imagined I may not get to know them better, as I still imagined getting off trail at the next junction. I talked it out with Henri that day. I was frustrated with having to vocalize my desire to skip ahead, especially when I wasn’t sure if it was what I really wanted. 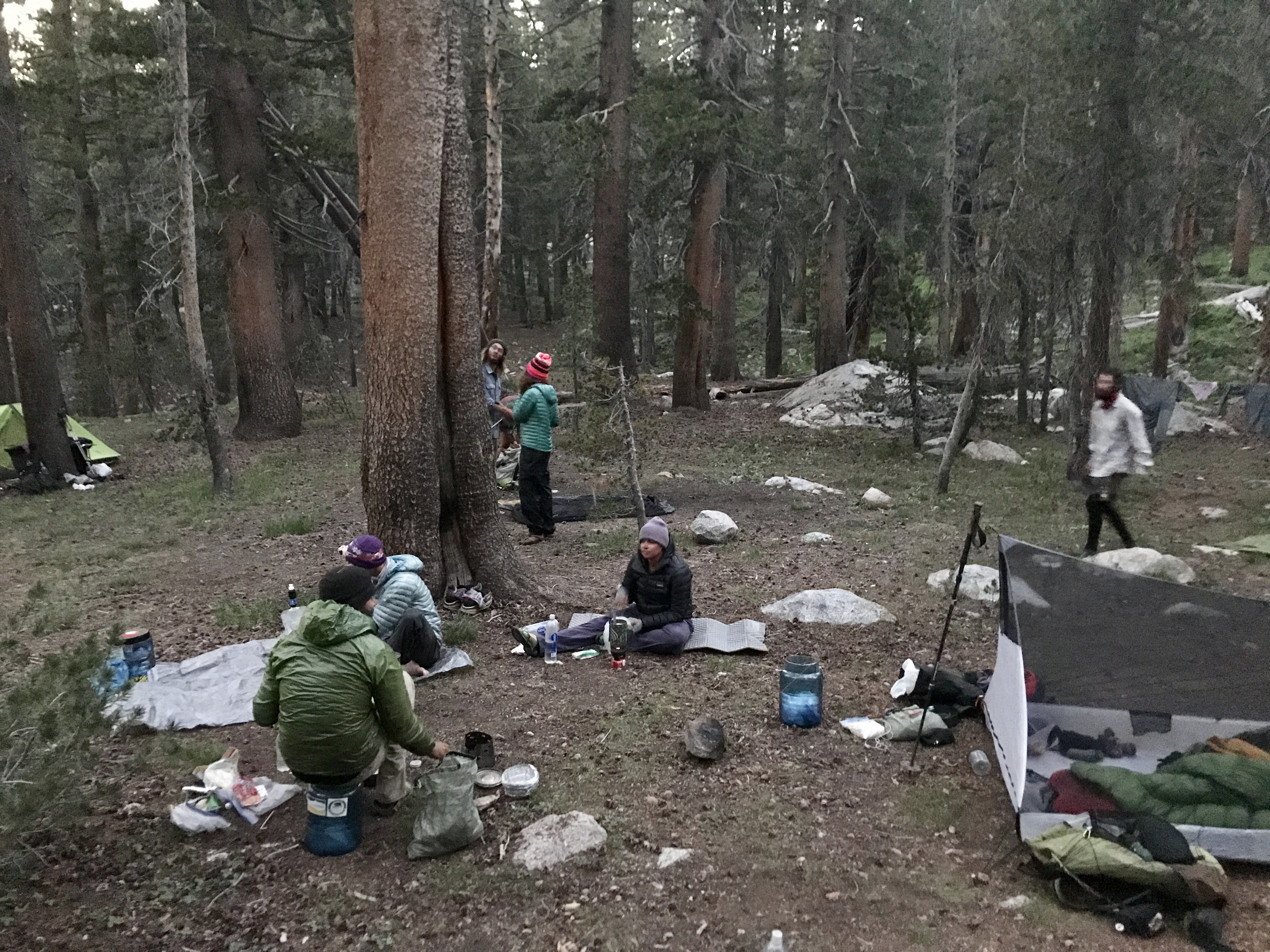 That night, we camped with the same group that we crossed the creek with, and set ourselves up for Mather Pass the next morning. Mather is known to be the most dangerous and fear-enduring pass, especially for those afraid of heights.

We approached the pass, all 8 of us – me, Rooster, Happy baby, Yaya, Utah Aaron, Cosmo, and Larry. We put on our microsspikes and took out our ice axes. We started climbing. Up we go. One foot in front of the other. Not looking down. Just as we learned. Just as we had practices. The usual strategy: three points of contact on the mountain at all times. 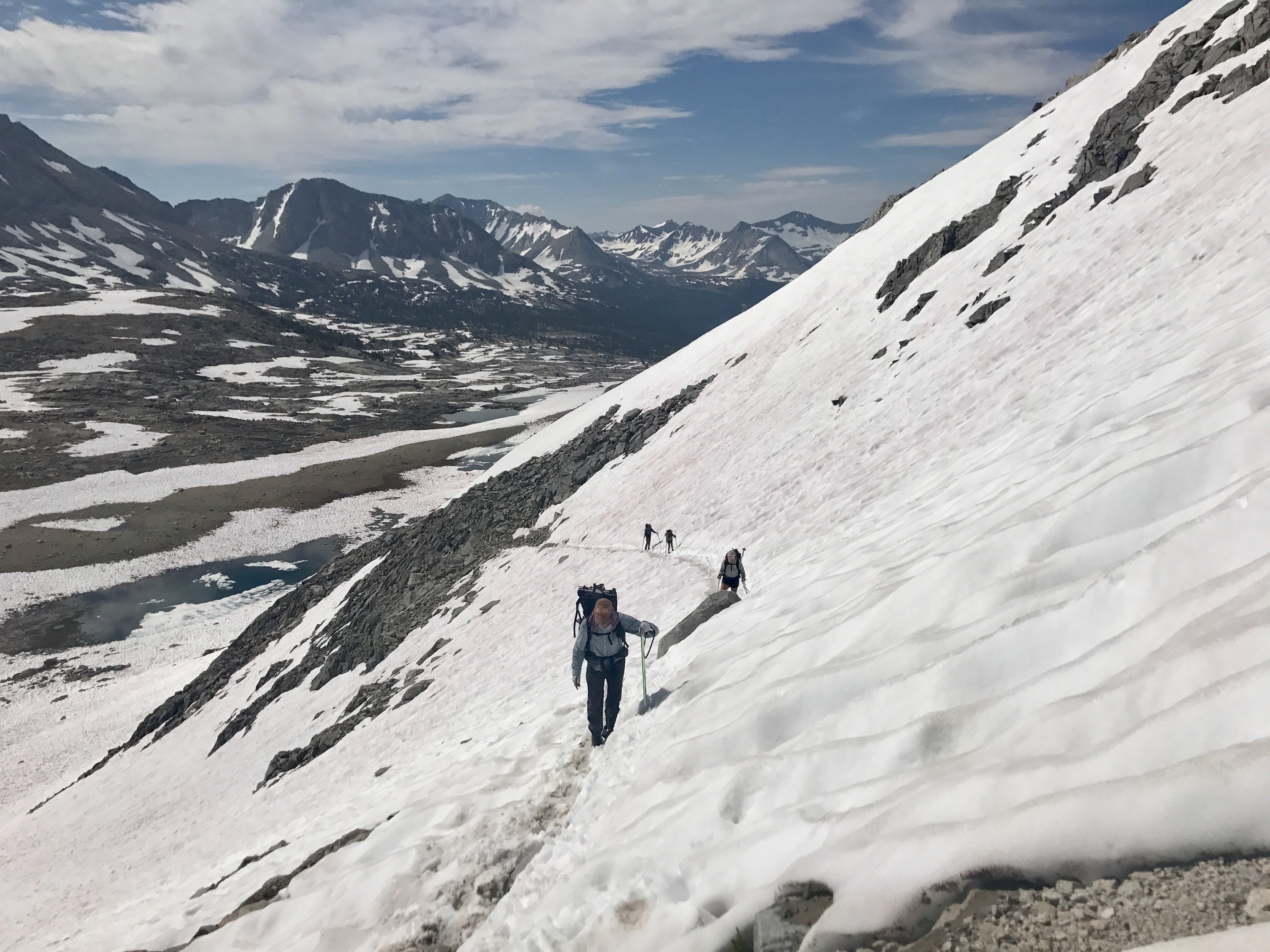 I was third in our single file row. I approached a spot that looked like someone post-holed. The two hikers in front of me went around it, but the only way to do so was to go further onto the edge of the snow-covered mountain. The fall would have required immediate self-arrest, at almost a 70 degree angle. I took a different approach- to leap over the hole instead. When I put my weight on the foot I had jumped with, my entire leg fell into the mountain. I was stuck. While I began to pull my leg out, I realized something concerning. My leg had not post-holed. Instead, my leg was dangling in the mountain. Below me was a hole that had no snow under it. A hole that my body was half way into. I could only imagine, if my body had slipped in that hole, how far I would continue to fall. We were hiking over a snow bridge with nothing beneath it.

I called to the group. Something along the lines of “There is nothing beneath me.” In case I had disappeared, I guess I wanted everyone to warn everyone what happened to me, so that they knew what happened, and so it wouldn’t happen to them.

To my surprise, my body didn’t fall through the hole. I removed my dangling leg from the void and rolled back on what seemed to have been the most solid part of trail a few steps behind where I fell in. Ice axe in hand, trying not to fall off the edge of the foot-wide trail, I managed to roll over my pack and stand back up (a skill that I attribute to my years as a gymnast). Because I rolled backwards, I had to attempt this same obstacle again. This time, with an extra hole to fall into. I skirted the edge of the mountain this time and by the grace of the universe and my shaky legs knowing when to quit, I made it across. 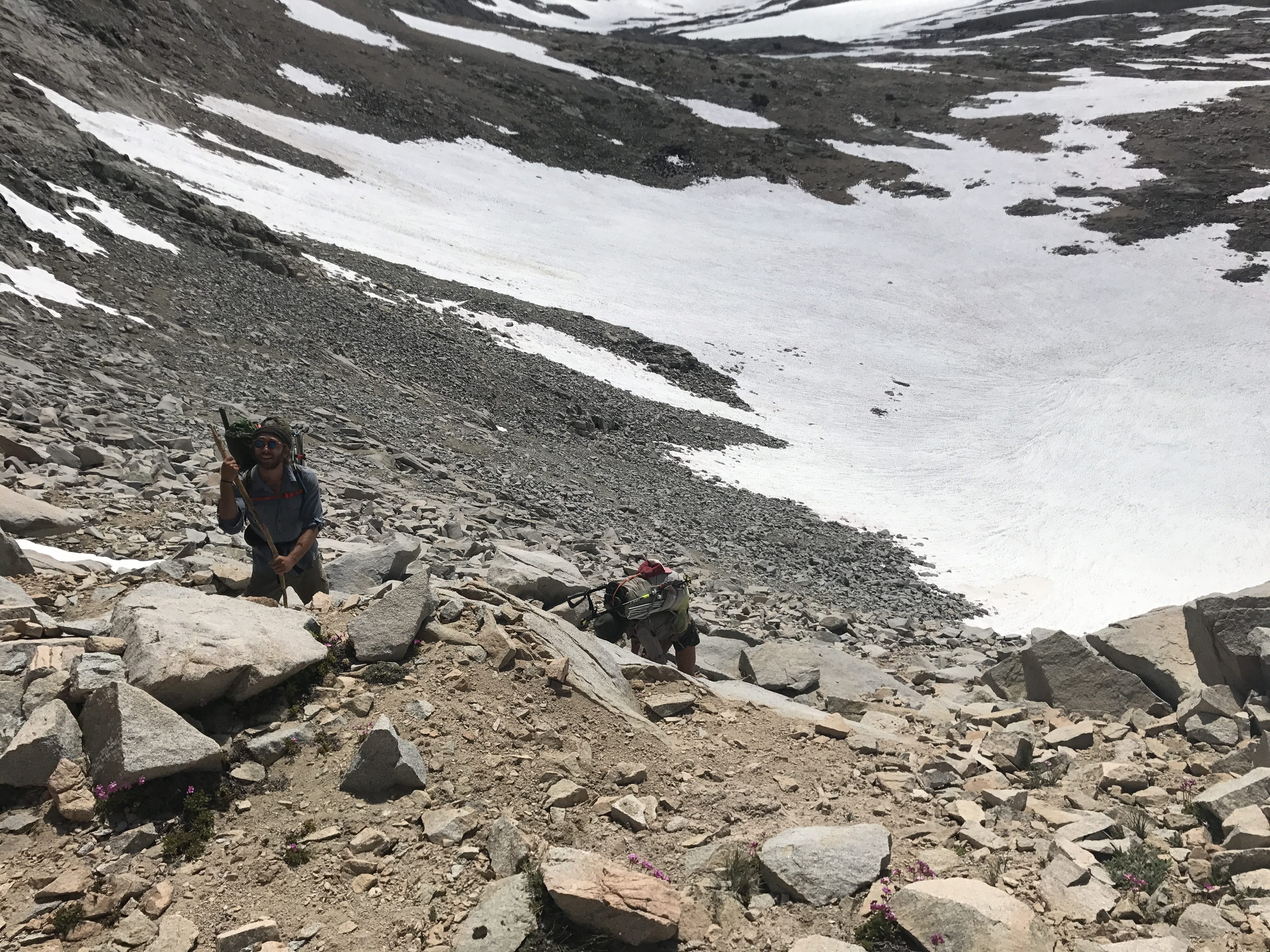 Twenty feet later, I reached a break in the snow where I was able to sit on a pile of rocks and take my pack off. I was still shaking and began to cry – with relief and also fear for those behind me. I created a terribly dangerous situation for the group. I communicated to each person as they approached the hole where my leg had fallen.

We all made it to the rock scramble safely. From there, we had a ton of other challenges. Seven hikers, spreading out to refrain from kicking rocks and debris down at each other. We spaced ourselves safely and eventually made it to the top of the pass. There were still miles of snowy downhill descents ahead of us, but for now, we were safe.

To give you a little insight as to how thru-hikers celebrate a thing like this (surviving possibly the most terrifying two days of our lives), we do the following:
1. High five and scream obscenely as each person makes it to the top of the pass.
2. Pass around the water bottle full of Tullamore Dew that Larry and Cosmo have been carrying.
3. Laugh about the dangerous situations that just occurred
4. Take a group photo: 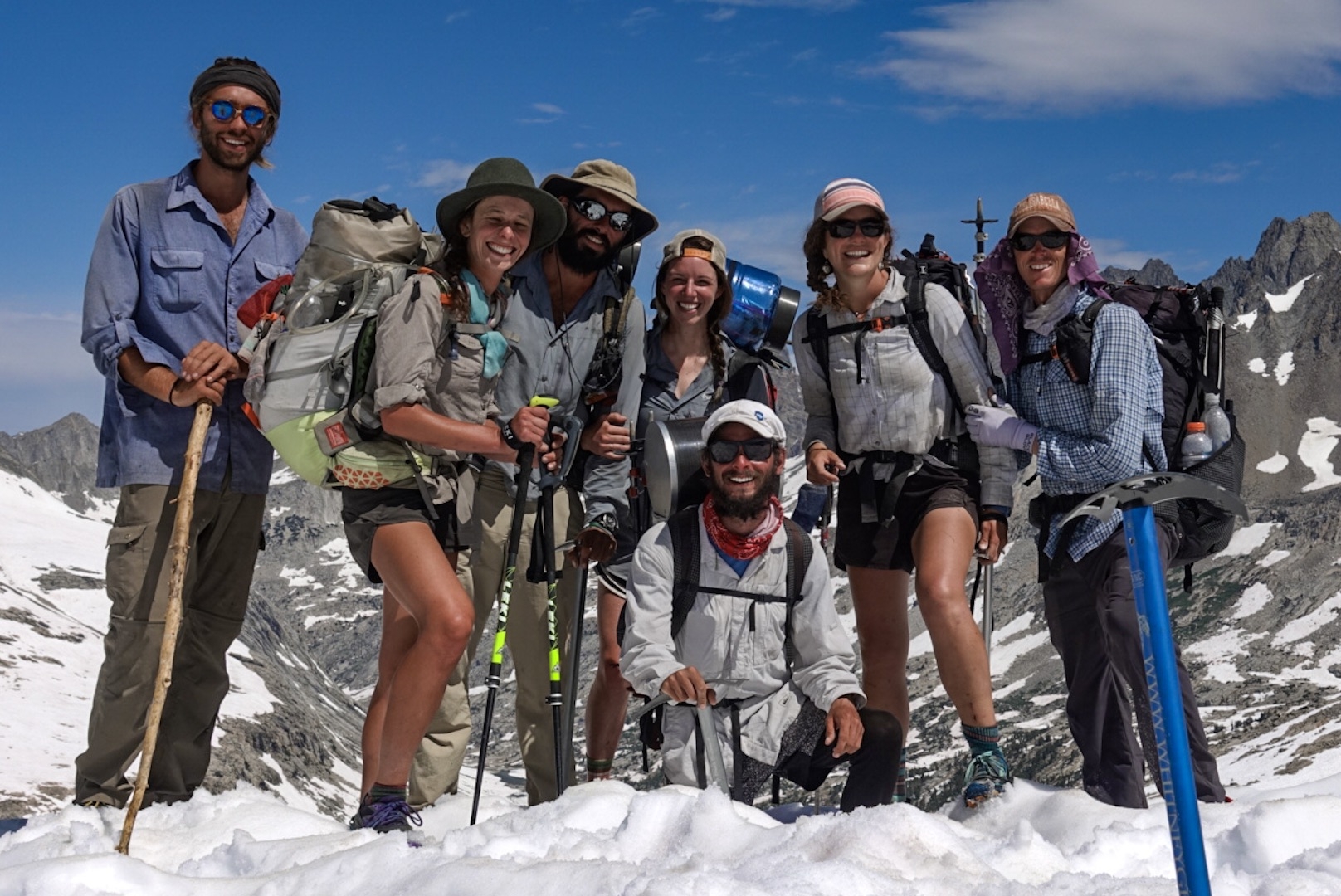 In the couple of days following Woods Creek and Mather Pass, another beautiful soul (appropriately named Soul Shine) joined our little trail family and has been the best trail angel hiker I’ve met. She’s given me food when I was low, sunglasses when mine broke, and just yesterday pulled out Oreos, graham crackers, and funfetti icing to share around the campfire. I truly feel like I received a great trail family when I needed it most.

As a collective whole, these individual hikers have helped me immensely through the past 5 days, even if they don’t know it. My attitude, outlook, and strength has been getting better with each mile and each unnecessarily long break. What I’ve realized in looking at the maps, Guthook guides, and talking with other thru-hikers is that I am through the worst of the Sierras. What this means is that I can confidently (and enthusiastically) say that I will be pushing through and continuing northbound without skipping the next section. I am still keeping the option of skipping and flipping open if needed, because that’s the part of learning to listen to myself that I wish to hold onto. I still believe this hike is not worth dying over. But I also believe that if I can do this, I will do this, and I’m going to continue to hold onto these new friendships, my hiking/life partner, and one huge goal.

Lauren (she/her) goes by Woodchuck on trail. She thru-hiked the AT southbound in 2016, flip flopped on the PCT in 2017, and thru-hiked the CDT southbound in 2021. When she's not on a long walk across the country, Lauren is a full time art therapist, an artist and an ultra runner. She is also a New York State licensed outdoor guide, and co-owns West Mountain Guide Co with her partner.