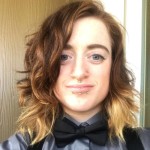 Two Gringos, Swarming Children, and a Persistent Dog on the Ausangate Trek

“Hola! Hola! Hola gringos,” parrots a group of dirt-smeared Peruvian kids. The mud appears almost regal on the youths, complementing their beautiful olive-toned skin. I am quite the comparison with my usual hiker trash appearance, muck splattered dramatically on my obnoxiously vivid-red rain pants, ginger locks a frizzy halo of disarray, and squishy, water-saturated trail runners. My trail brother and hiking partner, Lapsang, looks the equivalent, albeit swapping out the ginger frizz for a mop of blond, stringy strands. There are seven of the boys and I doubt any have yet to see their eighth birthday.

“Donde esta camino de Ausangate?” I call out to the gang, stumbling over the foreign words that feel like imposters in my mouth. I suddenly realize that this is the third time in an hour we have asked children for directions. In a language we don’t speak. Oh boy.

“Mami dulce,” one of the boys calls to me, pointing across a vast expanse of hand-plowed fields and barbed-wire fences.
“El camino esta ahi.”
“Did that boy just call me sweet mama?” I question Lapsang as I quickly translate the remainder of the conversation in my head.
“Yup,” Lapsang agrees, “but he also just informed us that we have been hiking in the wrong direction this whole time.”
“Cuantos minutos a el camino (How many minutes to the road)?” Lapsang asks, as I wonder if we are about to embark on another of our famous bushwhacking adventures a la the PCT circa 2016.
“Diez minutos! Vienta! Treinta! Uno minuto!” each boy calls out a different time reference and they all burst into laughter simultaneously.
“Fuck it,” I proclaim. “Let’s bushwhack through the fields.” 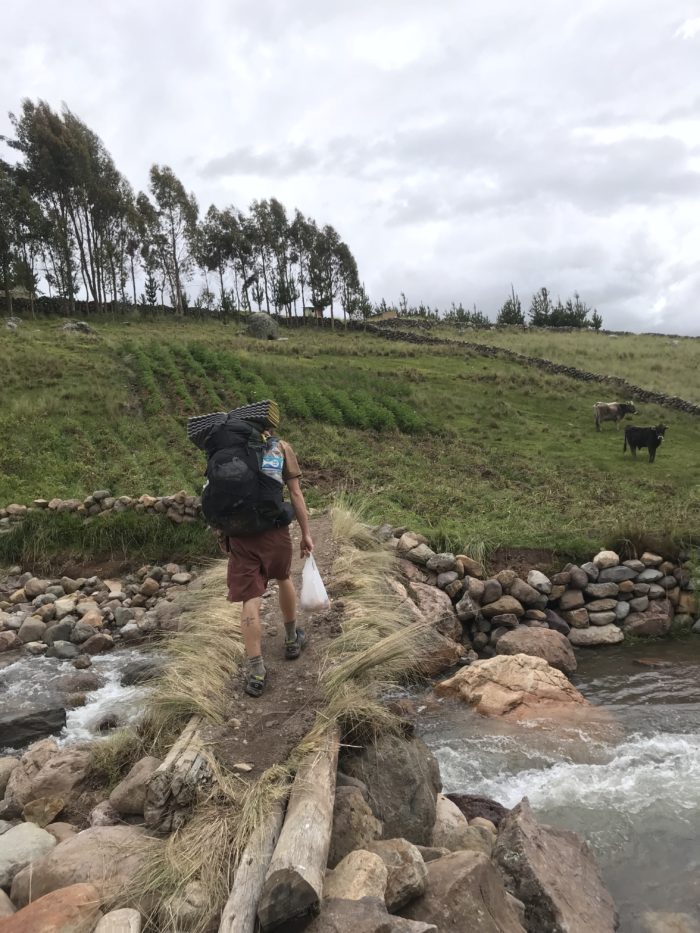 We begin squelching our way between rows of cabbage and unknown foliage, soggy earth grasping at my shoes, threatening to claim them for itself.  Within three minutes of departing from the semi-dry road, we hear a chorus of shrieks, a rally of adolescent war calls. Suddenly the gang of boys pops out from the bushes, following our trail with their feet and voices. “Dammit, we have entered the South American version of Children of the Corn,” I anxiously think to myself. I quickly reach into the pocket of my trusty backpack and pull out a fistful of coca candies, a local sweet treat of the Andes, presenting the peace offering. I am bombarded by a mass of open-palmed hands, eager for the unexpected reward. My stash of candy is briskly depleted and we make a swift retreat.
“I think I just lived up to my name of mami dulce,” I say to Lapsang.

Safe from the threat of death by dismemberment at the hands of candy-crazed children, we continue on.

“Arf, arf!” barks a small, black dog. Her mid-length fur forms partial dreads and she has a friendly air about her, even though I know she is a member of the prolific homeless dog club that runs rampant in the Cusco region.
“That dog has been accompanying us for at least three miles now,” I comment to Lapsang. “I guess we should name her. How about Blaze?”
“Blaze?” questions Lapsang.
“Yeah. She is a trail blazer, always leading the way ahead of us.”
“What do you think about that name, Blaze?” Lapsang asks our furry new friend.
Blaze just prances about happily, wagging her tail and smiling back at Lapsang.
“Blaze it is,” he agrees. 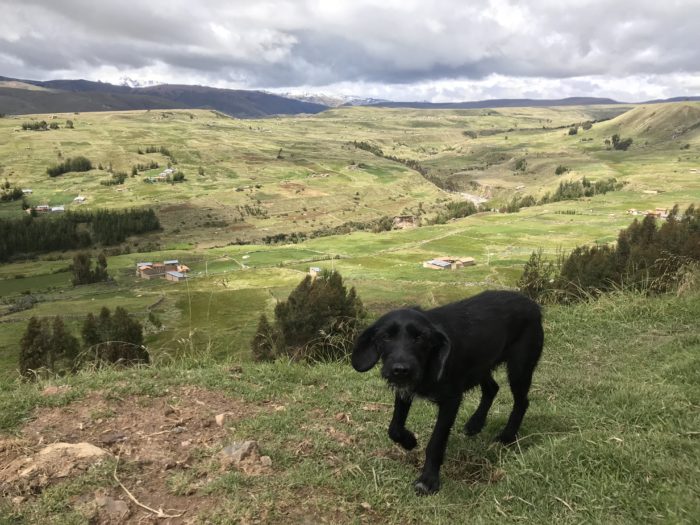 We continue on our farmland bushwhacking adventure, crossing streams and dodging cow patties, with Blaze confidently leading the way. I hear thunder crashing ominously in the distance, and ahead of us the sky has morphed into a morbid gray mass of foreshadowing.
“That does not look good,” Lapsang remarks. “We are walking right into that, aren’t we.”
“Yuppers,” I reply, while cinching the hood of my rain jacket tight around my head.
Within ten minutes the skies open up and remind us of its power. Frigid raindrops hurl down, splattering my backpack and trickling down my face. “At least this will clean off all the mud,” I think to myself.
Doubting our belief in its power, the violent, but simple rain begins to transition. Small, hard balls of hail pelt our chests and bounce off  our limbs. With no other option, we trudge on, flicking water off  our faces and attempting to avoid the worst of the shin-deep mud puddles.

My feet feel like bricks, each one gaining more mass with each resistant step. My uterus is mutinying via a volley of painful cramps, or maybe it is the fact that I have been denied a bowel movement for three days. I must have somehow offended the poop gods. Shit. I am lightheaded, lethargic, drenched, and massively dehydrated. I am reluctant to filter any of the plethora of water sources surrounding us because of the copious amounts of alpaca and cow poop littering the path. Lapsang is somewhere behind me yelling aggressively at Blaze, since we realized that if she doesn’t stop following us she will most likely die once we get higher into the mountains. I have no energy to help with the heartbreaking task of scaring off our trail leader. Luckily Lapsang’s heart and determination is big enough for the both of us. However, the persistent pup has taken quite a shine to my trail brother and is reluctant to abandon her new family. I had forgotten that backpacking isn’t always rainbows, sunshine, and trail magic. 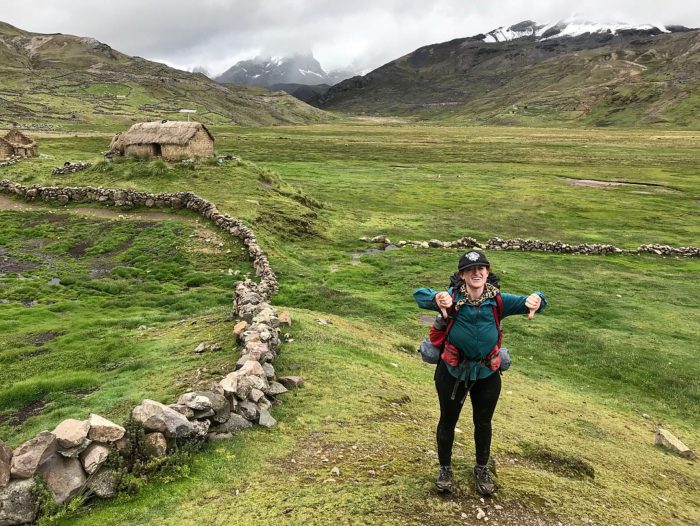 The Ausangate trek is a short, but demanding 50-mile hike outside of Cusco, Peru. The most challenging aspect of the hike is the intense level of elevation; the trail never drops below 12,500 feet and tops off at a high of almost 17,000 feet. Ausangate is the highest Incan sacred mountain in Peru and the trail is known for its traditional herding villages nestled in the mountain, hot springs, and abundant wildlife. As well as traversing by Vinicunca, also famously known as the Rainbow Mountain.

Since my first Pct adventure in 2016, I have shed my perceived exterior a multitude of times. I consider myself an onion, gradually peeling back one layer at a time, on the ultimate quest to discover myself and embrace the authentic being residing in my inner core. The loss of some of those layers makes me cry, some cause me to scream, some to laugh. All are pre-conceived notions placed on me by society, other people projecting onto me, or false identities I have adopted. The process is brutal, but one I am committed to. Who am I? I am a warrior. I am a survivor. I am stubborn as hell. I am a high school dropout. I am sometimes a mess. I am weird. I am gay. I am an advocate for all those hikers that don’t fit between the lines. I am proud of the person I am finally letting myself be. I am Matador. I am a thru-hiker.