About 10 miles north of Humphreys Peak, I stopped at a bear-proof locker. Inside, the water cache was in complete disarray, which meant this resupply box hadn’t been maintained in a while. I knew it was maintained, however infrequently, because it contained the same notice as some of the previous boxes along the Arizona Trail.

This resupply box is maintained by volunteers. Please respect their hard work and the ethics of Leave No Trace.
So, a big thank-you to all the volunteers who maintain these resupply boxes. Also, my apologies on behalf of hikers who left trash for you to collect. They typically sealed their garbage in a Ziploc bag, but that’s no excuse.

Thank-you also to the trail angels who put snacks in the resupply boxes. Finding a tasty treat left by a complete stranger never gets old. But at the risk of sounding ungrateful, I’d like to provide a little trail-magic feedback.

Resupply boxes may, of course, contain food. But since food attracts wildlife, please give some thought to what type of trail magic you leave. Anything unopened will probably be fine, but an open tray of Oreos, for example, may end up crawling with ants. Additionally, once the tray is empty, the Oreo container needs to be packed out. I don’t always have enough space in my bear canister.

Speaking of bulky packaging, a 12 pack of Coca Cola is quite large. The box containing 24 granola bars is pretty big too. Once the boxes are empty, they need to be packed out. You’d be doing everyone a huge favor by taking the cans, or granola bars, out of their boxes and leaving just the individual items. Also, with the packaging gone, hikers won’t be tempted to drink a can of Coke, then simply put the empty back in the pack.

Your empties, someone else’s problem

The volunteer notice says that empty bottles may be left inside a maintained resupply box. However, several of the unmaintained boxes contained almost-empty (or completely empty) bottles. These were private water caches that had become public, per the instructions on the bottle. Usually something like, “Public after 05/01/22.” In some cases, the directions were specific, “If you use the last drop, please crush and carry out.”

The problem was, nobody had carried them out. Ideally, the people who cached the water would take their empties with them, or return to pick them up later. After all, “Pack it in, pack it out.” Instead, they were relying on the person who uses “the last drop” to clean up after them.

Other than having to carry a plastic container many miles, I could think of several reasons for not removing a “public” bottle.

I soon realized that other hikers were using the same reasoning. If you can relate, and you’re planning to hike the AZT, I have a suggestion: crush and carry-out a single container. Just one, from anywhere along the trail.

Your empties, your problem

If you plan to cache water, don’t assume that your leftovers are worth the effort necessary to pack out your trash. The remaining water certainly has value, but overall it’s not enough, otherwise bottles wouldn’t be accumulating. People need more of an incentive to dispose of your container.

Here’s my suggestion: trail magic with strings attached. For example, a pack of M&M’s and a note that says: “When the container’s empty, if you crush and carry it out, the M&M’s are yours.” If it’s a long way to the nearest trash can, you could leave a larger pack of M&M’s. Farther still? Make it two packs.

I guess you could use the same approach for gas canisters. I only encountered three of them in resupply boxes, so they’re not a major problem. Two of the canisters were in maintained boxes, and they contained (I’m guessing) about 10 meals’ worth of fuel. I’m sure that eventually, they’d be of value to someone. The third canister was in the unmaintained resupply box at Grass Shack Campground in Saguaro National Park. It contained slightly more than one meal’s worth of fuel. It should have come with a note that read: “I don’t really want to carry this out. It’s not quite empty, so I’m going to pretend it isn’t garbage. Besides, the Molino Basin Trailhead is only 26 miles away. Thanks!”

Leave it tidier than you found it

As I mentioned earlier, the Kelly Tank water cache was in complete disarray. About half of the bottles were partially-full, and all of them were in a big, jumbled pile. These weren’t the typical single-use containers from a private cache, they were much sturdier. Each one had a notice written on it. Something like, “Public cache. Do not crush and carry out.”

Before updating the Farout comments, I wanted to accurately estimate the amount of water, rather than hazard a guess. If the partially-filled bottle(s) had been used first, estimating would have been quick and easy. Especially if the empties, partial, and full ones were left in a logical order. But the cache was a mess. After consolidating the partial bottles, I put the 14 empties at the back of the resupply box. Next, I added the five full gallons, and put the partial bottle nearest the front.

One final suggestion: only update the comments if you’re absolutely sure what you’re writing is correct. Better to have an older, accurate Farout comment than a newer, inaccurate one. 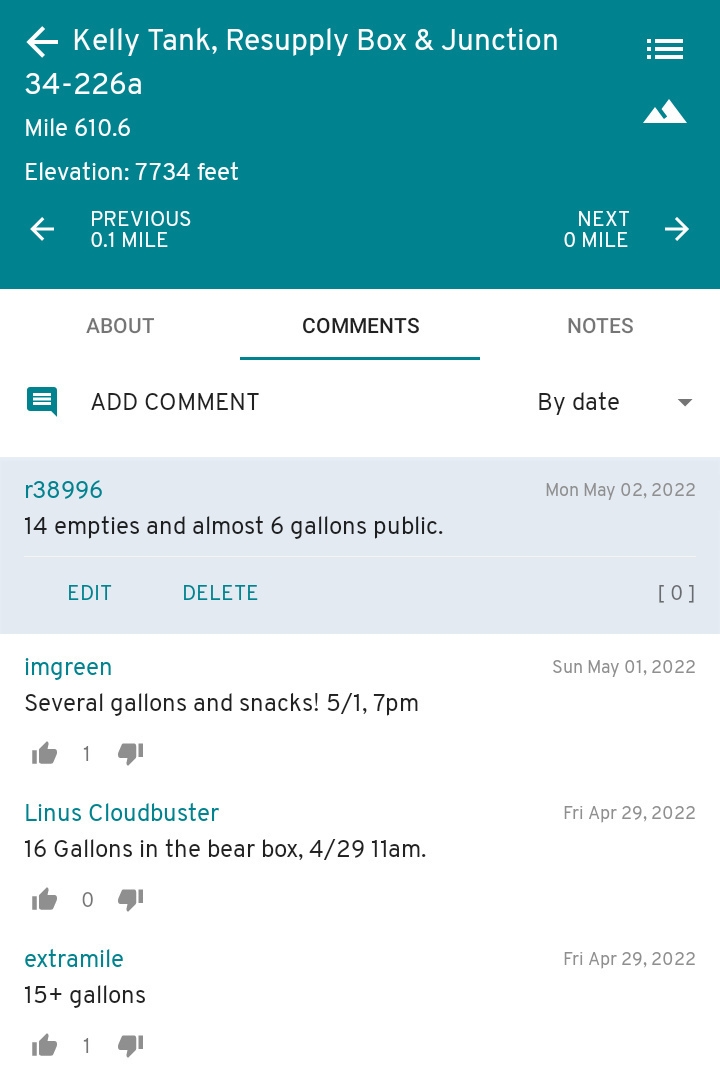