When choosing to hike SOBO, I understood I might not have enough time to start slowly and ramp up my daily mileage. (My start date ended up being July 25th, which meant there was a real chance that winter would beat me to the Sierra Nevada.) After wildfires broke out near Mazama in mid-July, I knew I’d definitely have to hit the ground running. My last-minute change-of-plans meant hiking from Stehekin to Rainy Pass to Stephens Pass in seven days. I’d need to average more than 20 miles per day in order to reach my first resupply.

Other than a nagging plantar fascia in my left foot, I felt as ready as I’d ever be. I completed my preparations with some new gear to help me through the break-in period.

My pre-trail nerves persisted for a few days after I started hiking. I guessed they’d begin to subside once my daily routine became second nature and any minor injuries had healed. Still, my confidence did take a minor hit a few miles south of Stehekin. The afternoon bus had dropped its passengers at High Bridge, and a group of six SOBOs soon caught up with me. As they disappeared into the distance, I started to wonder if I too needed to be going that fast. “What if I’m not fit enough? What if my pack’s too heavy..?” I had to remind myself that the break-in period is mental as well as physical.

I caught up with the “A-train” (as I dubbed the group of six) while they took a break next to the South Fork of Agnes Creek. I chatted with some of them until they sped off through the trees once again. The last time I saw them that day was during a steep climb. I didn’t know it then, but their approach to the PCT was “longer days, more zeroes”. My plan involved fewer miles per day and fewer rest days. I only discovered this difference two weeks later, when the A-train overtook me again, somewhere between Chinook Pass and White Pass.

My physical break-in began with a minor case of chafing. At first, I wasn’t too concerned because I’ve chafed before and it usually heals pretty quickly. However, when the chafing worsened the following day, I began to worry. For anyone who’s never experienced it, I should emphasize that it ain’t fun. I began to suspect that my new compression shorts might be more fashion than function, so I decided to go without. (Just the compression shorts, not my actual shorts. I’m not Donald Duck.)

Initially, going commando (not recommended in shorts with an inseam shorter than seven inches) seemed to be helping. Things certainly seemed much breezier down there. Unfortunately, that day involved two climbs totaling more than 7000 feet. By the time I neared the top of the second climb, I could tell that the crotch situation was getting worse. I stopped below Mica Lake to fish the compression shorts out of my pack and contemplate my next move. I noticed that the interior of the shorts had raised seams, so wearing them inside out might solve my problem. 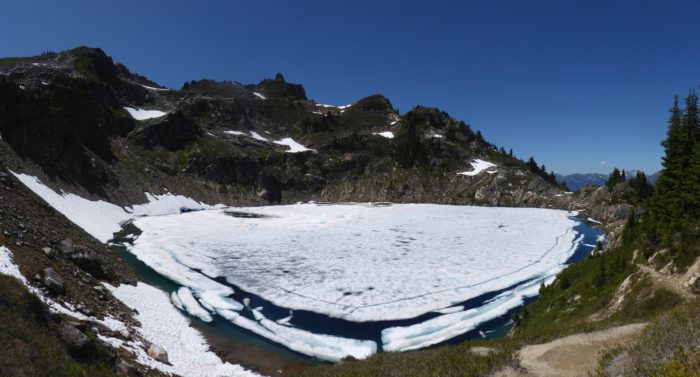 While changing my shorts in the middle of nowhere, I thought it unlikely that I’d be interrupted. I hadn’t seen anyone since early morning, so of course, this was the moment a hiker appeared. He darted back around the corner until I shouted that it was safe to come out. I explained about the chafing and the new shorts. He’d thru-hiked the Appalachian Trail and he completely understood. He told me that chafing was the only reason he’d had to take time off from the AT.

I know he was trying to express sympathy, but his tale wasn’t reassuring. I was deep in the Glacier Peak Wilderness, and I’d passed my halfway point earlier that day. My only option was to keep going, no matter how painful. Before we parted ways, he advised me to use Desitin diaper-rash cream for future chafing. I thanked him for the advice, apologized again, and he continued north. I waddled south.

The last few miles that day were almost unbearable. The waddling helped, but the now inside-out compression shorts were too little, too late. The pain in that-most-sensitive-of-areas was inescapable. Or so I thought. In a desperate attempt to quench the fire down below, I finally put my trekking pole between my legs and yanked it upwards against my groin. There was an immediate, intense stinging from the rubbed-raw skin, but after that, utter relief. The only downside was that I looked ridiculous and had to keep dismounting every time I saw another hiker.

Looking back during the climb to Red Pass.

After completing only 19 miles, I rode into camp at Pumice Creek like a witch arriving early for Halloween. Obviously, this wasn’t a sustainable situation – I needed my trekking pole for other things. And besides, that kind of behavior is how a person receives a trail name that will haunt them forever. After dinner, I came up with the solution to my problem: the sock wedgie. My socks were serving me well in preventing blisters, so they were obviously good at reducing friction. I figured that an inside-out sock might perform a similar function if carefully arranged inside my compression shorts.

Sock-flossing ended up being pretty effective. True, it was a little uncomfortable, but nothing compared to the chafing. I can report that “Darn Tough” socks perform slightly better in the wedgie role than “Farm To Feet”. (Not a complete surprise – the clue’s in the name.) After two days, the chafing had healed enough that I was able to revert to using the socks exclusively as they were intended.

It’s the first time I’ve used either brand of sock, and I was really impressed with both. Although my feet did develop a few blisters during my first two weeks on trail, they could have been much worse. For a start, I was using almost-new boots while covering more distance than previous hikes. Also, I hadn’t done much walking in the weeks prior to the PCT because of the problem with my left foot. The blisters that I did get, I punctured using a small pair of nail clippers. (Nail clippers cut a small v-shaped hole, and the blisters don’t fill up again.) By the time I reached Snoqualmie Pass, my feet were fully broken-in.

Get Ready to Rumble

The last part of me to adjust to life on the PCT was my stomach. During the first three weeks, each day I’d have to tighten my hip-belt slightly. After three weeks, the weight loss slowed and my appetite went into overdrive. This, I think, marked the end of the break-in period. I forgot about blisters, chafing, and self-doubt. Instead, I spent most of my time daydreaming about food. Even when I wasn’t thinking about eating, a food-related thought was never far away. What does a hungry engineer ponder when he’s bored? Well, a picture’s worth a thousand words. 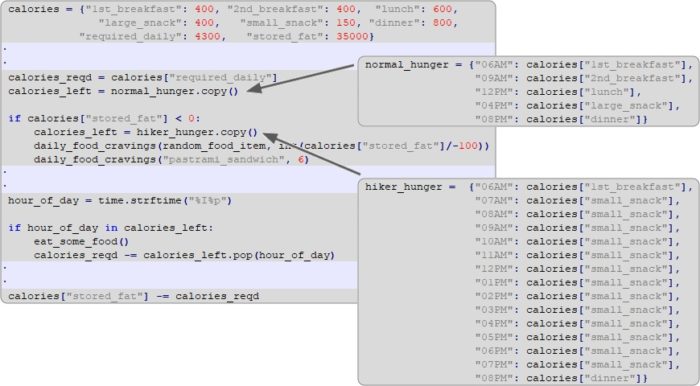 This one’s for the nerds.