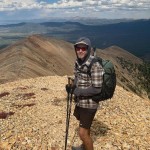 Famously, the Appalachian Trail has owned the term the “Green Tunnel” for it endless walks through lush green forests. And it certainly has a right to be called this. Last year on the AT, it certainly illustrated why this is so- green, green, and more green (and brown)…for 2,189 miles, divided by 14 states. The following will project my thoughts about the massive hike through California. The “Golden Tunnel”, in some ways is a similar mental challenge to the Green Tunnel.

Little did I know during my Green Tunnel traverse, that a year later I would be on yet another long distance hike. Currently, I stand about 35 miles south of the Oregon border on the Pacific Crest Trail, heading north. It has been almost three and a half months. Yet, almost 1,700 miles later, I am still in California. I will further refer to the California section of the PCT as the “Golden Tunnel”.

Three and a half months. How on earth am I still here? All my memories of the PCT up to this point have taken place in the same state. Unlike the AT, the mental progress is much more hidden on the PCT. You have to dig for it. Although it stands as one state, California offers an extreme amount of variety. Desert, high country, forests, volcanic lava fields, etc. Instead of searching for progress in state lines, search for progress in the changing environment. Each change represents one further step towards the Pacific North West. Doing so made the Golden Tunnel seem much more manageable. 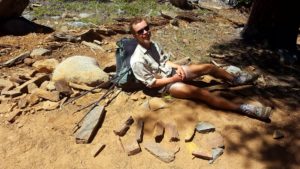 For prospective PCT hikers, all I can say is that the Golden Tunnel is a magical experience. It is tough to imagine a single state offering so much variety, but alas, many drop out following the High Sierra, near South Lake Tahoe. If you are to continue, this is a pivotal moment. Roughly 700 miles remain between you and Oregon after the High Sierra. In many ways, it is a return to the desert. Hat Creek Rim, as beautiful as it is, boasts a 30 mile stretch without water. This is the driest section of the trail. And it isn’t even in the desert (as it is conventionally referred, the first 700 miles of the PCT). But do not be fooled- it is definitely a desert-like throwback, not only on Hat Creek Rim, but the remaining 700 miles of the Golden Tunnel. The heat in Northern California also feels more brutal at times than the desert. Going NOBO, you tackle the desert in late spring/early summer. By the time late July/August rolls around, it is the dead of summer in Northern California.

Unfortunately, the border to Oregon stands excruciatingly close, but all I can think about is an injured toe which will set me back at least a couple days. It appears the Golden Tunnel of California is not quite finished with me yet. But I will cross the state line, soon enough. And when I do, it will signify one hell of an epic hike across this massive state. Take care dear hiker, and keep your eyes on the prize of the Pacific North West- it is patiently waiting for you.

Don't ever thru-hike; you'll lose any sense of purpose or hope for a relatively normal life you once had. All of your money will magically disappear from your bank account. For some reason I hiked all three triple crown trails. I didn't find myself, and now I have this grotesque disease where I need to hike far and as often as my wallet will let me (preferably in a state of dehydration, hunger, and malaise). If there's anything redeeming about me, it's that I gave 900 hours of my time to maintaining the Pacific Crest Trail in 2017. I would definitely do it again. So, at least I'll basically work for free (and enjoy it).