The Liquor Store in Hiker Heaven and Hiker Hell 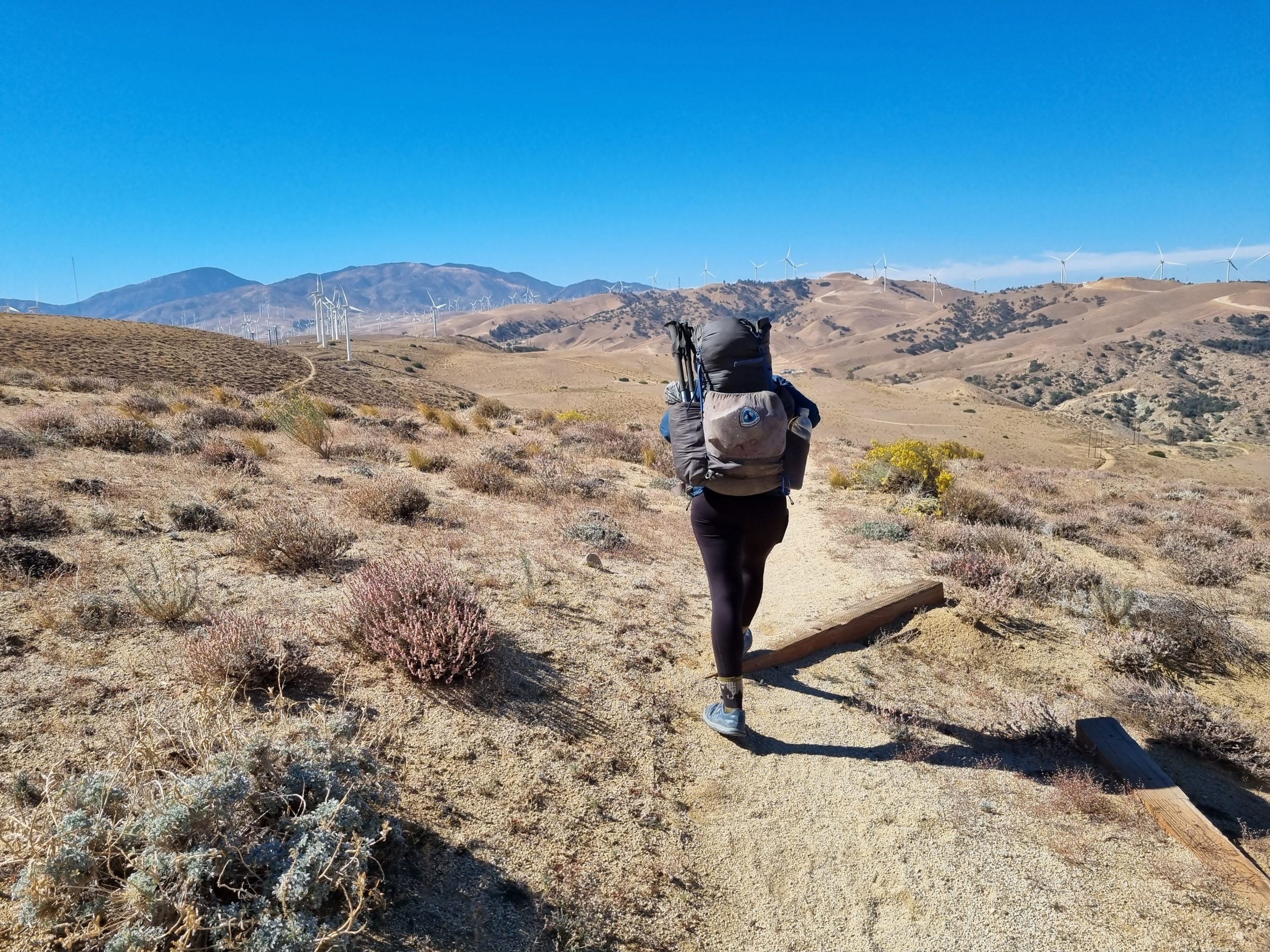 We had breakfast at the same diner as the dinner. I had some egg, hashbrown and a massive belgian waffle with strawberries and half a gallon of cream. It was one of the best breakfasts on the trail. The shower was not working but the trail angel let us shower in her house. Shower after 8 days – heavenly!

Then we hot a shuttle back to the trail and started climbing up. We saw a bunch of annoyingly noisy windmills for hours and hours and had lunch under a bridge in a dried creek. It was cold and windy and we ended up cowboying high on a hill. When eating dinner I noticed I had lost my menstrual cup. Nine Beers didn’t have extra tampons either. After researching the FarOut we saw we could get to a store from Hiker Town – but we’d have to get up at 5 and walk 28 miles there first. 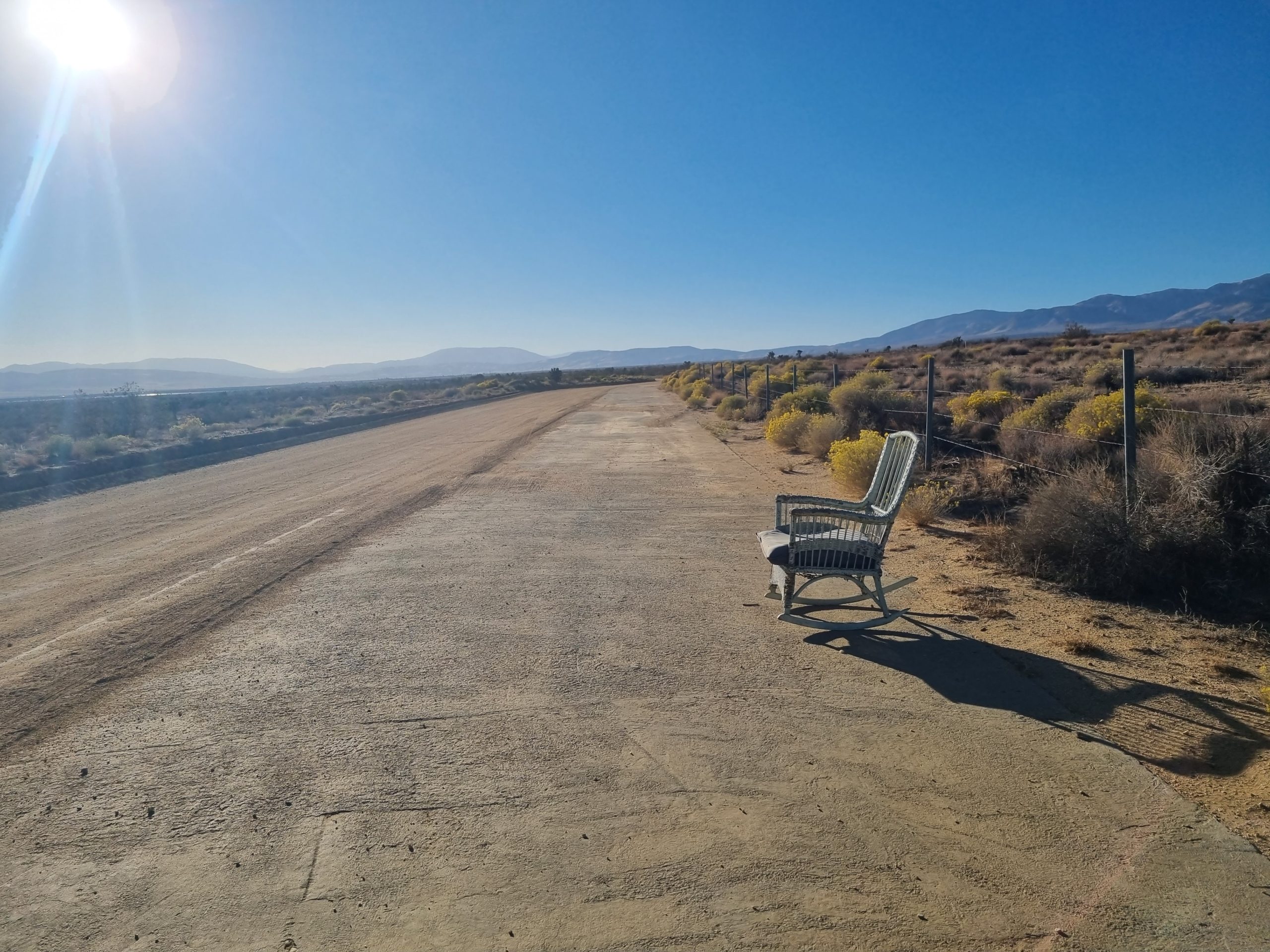 A guy was passing our camp at 01.20 when I was just up blowing in my deflated matress. We got up at five and realized it was 32 miles to Hiker Town. That would be difficult as none of us had ever hiked more than 29 miles.

We came to a trail magic spot that had chairs, christmas lights, fresh apples, water – and even a tampon! The trail really provides. We passed a guy cowboy camping by a trail and then a crazy long section of windmills. The guy who we had passed turned out to be Saltlick who had done 24 hour challenge. We walked the whole day and night over the Los Angeles aqueduct that was a very exposed but flat section. Ironically there was barely any drinking water and we had to carry a load of four liters or a gallon of water with us. There were some caches that had some really yellow water in them. There was also a rocking chair in the middle of nowhere just as I wanted to sit.

After dinner we still had eight miles to walk in the dark. We were crazy tired, almost falling to the ground from exhaustion and decided to get a room in the Hiker Town if there was one. At 9 p.m. we came there after 15,5 hours of hiking and got indeed a room called Doctor’s office. It was nothing but two beds in a tiny house with spiders climbing around the walls. I was too tired for araknofobia and threw one of the spiders away with my bandana. The door wouldn’t even close and we had to put Nine Beers’ backpack to block it from opening. I got a hysterical laughing attack at night thinking about how absurd the whole evening had been and what a horrible place we were sleeping in still thinking it was the best place we had been sleeping at in a long while. 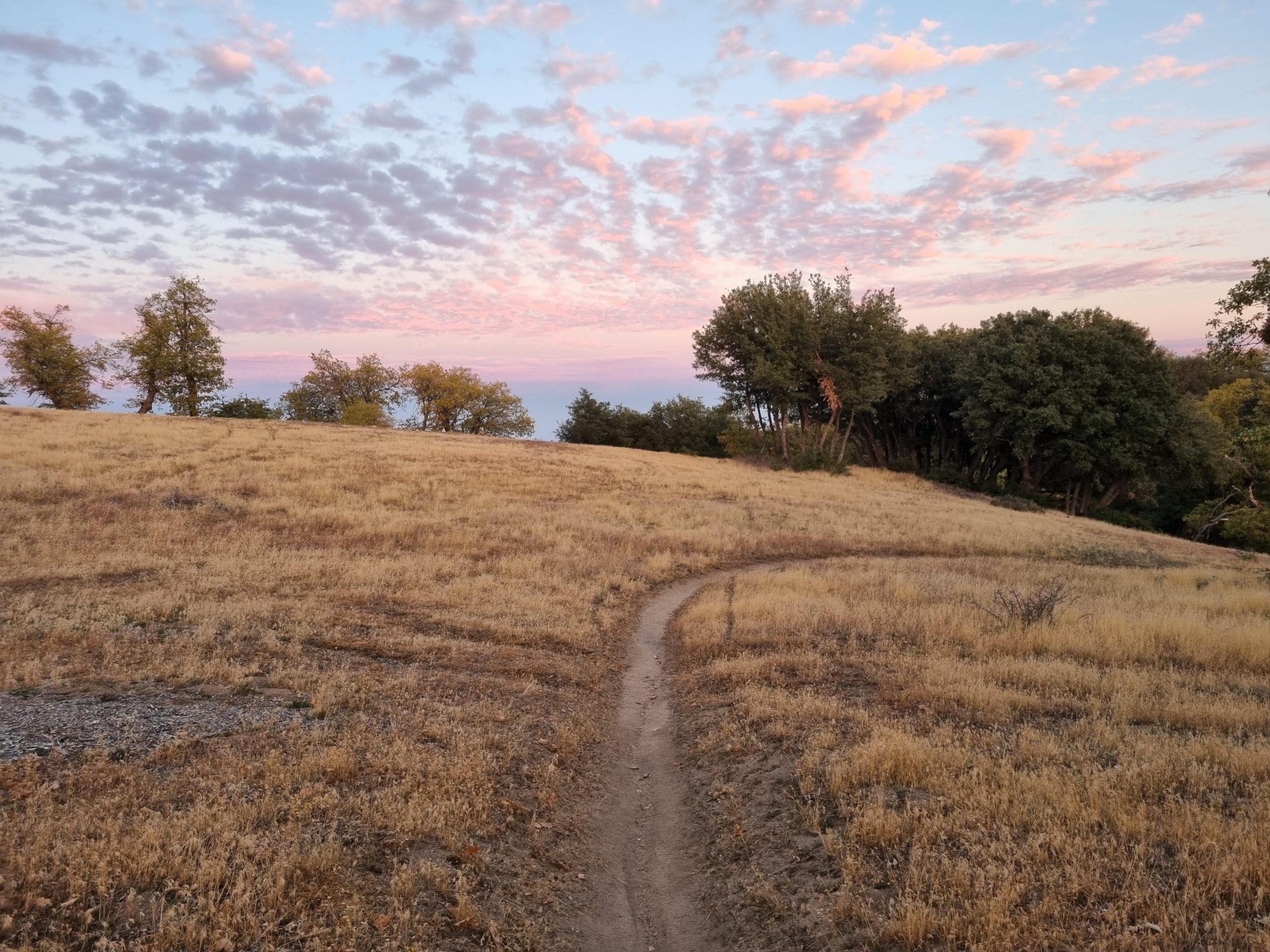 We woke up at 7 when the alarm went on. We were so tired from the previous day that we had slept like babies, or more so like teenagers.

We had a breakfast by the tables outside. I tried to go to the outdoor shower but didn’t want to pay 5 dollars for that so I did a quick armpit-feet wash in the sink in the toilet.

The woman working in the place brought us some coffee and muffins and then we called a ride to the grocery store in nearby Neenach. The purpose was to get some tampons but we also bought more snacks, chocolate and muffins. Boy did this period not get exspensive!

The hike was really tough being so tired. It was warm and we were climbing slowly over 4000 feet up. The water caches had yellow water and my filter that was blocked made me crazy. Also the black flies made a comeback and they are the second most annoying thing on the whole PCT – the most annoying are naturally mosquitoes.

The last stretch was pretty but there was some poodle dog bush around that can cause crazy skin irritation. Also our campsite was surrounded by it and it smelled like a plantation of weed. Nine Beers doesn’t have a sense of smell so she couldn’t smell them which was I guess a blessing, as missing most of the smells on the trail.

However it was nice to be able to sleep in ones tent after many nights break. 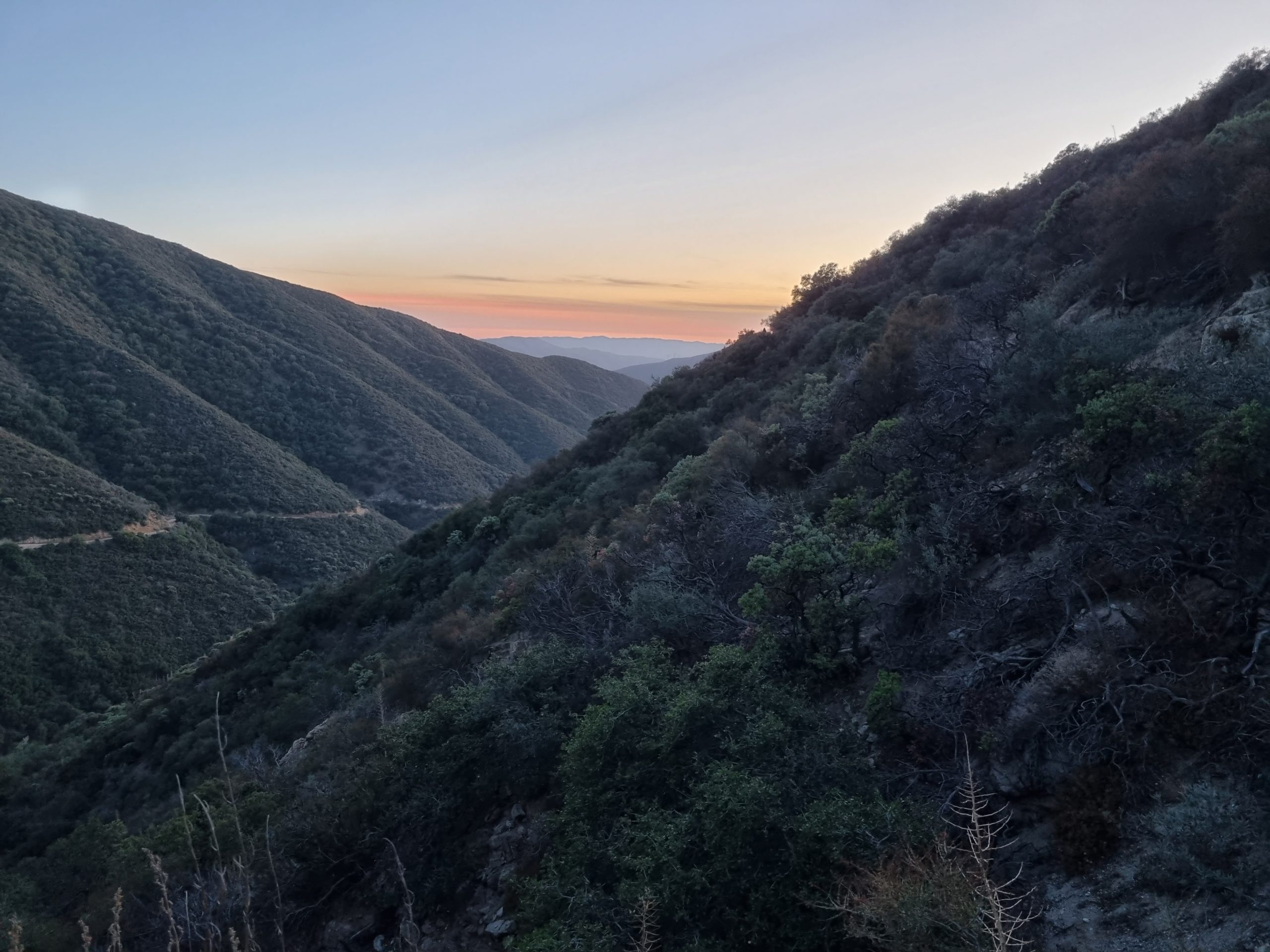 The days have been following the same routine: Wake up at 5, start walking 05.30, walk to a water source and filter water a small eternity, eat breakfast around sunrise, climb climb and climb til you are exhausted and your feet are sore. Lunch around noon and dinner by the sunset, walk a couple of hours after dinner. It is impossible to do something constantly for 13 hours a day and keep enjoying it. Now it was just a race for the last hundred miles to the end.

This day was no exception to the daily routine, except that we had to avoid the Poodle dog bush that was all over the trail. We were passed by Rock Solid and we camped at the same spot with him by a noisy highway. It was though warmer than in a long time and we slept relatively good, me waking up only once to blow up my airmatress that always is half empty by 2 a.m. 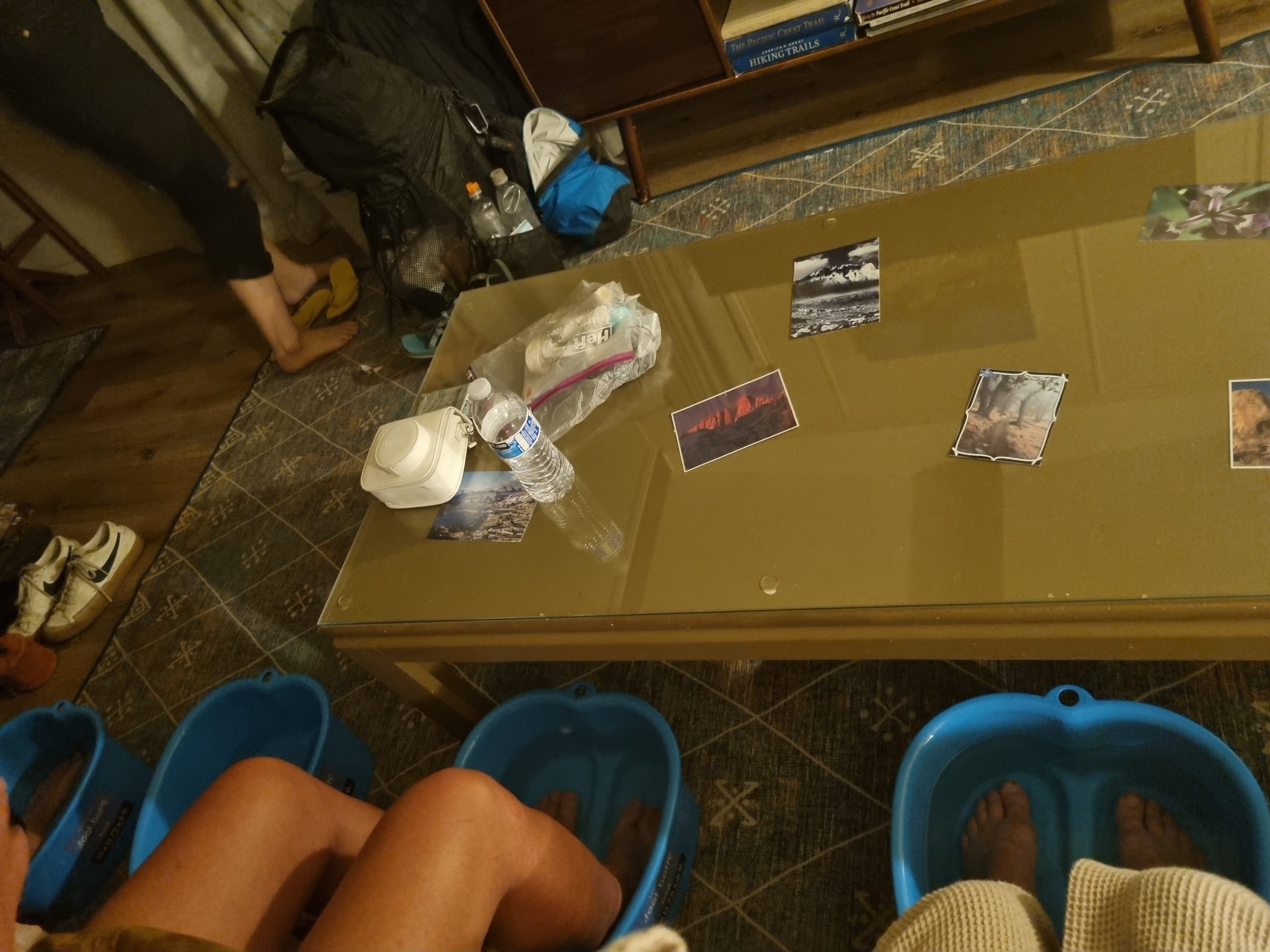 Wake-up at five, marching like crazy from 05.30 again. It had not been cold at night for the first time in a long time.

After breakfast Nine Beers wanted to hike at her “turbobspeed” to catch up with her twinsister in Agua Dulce as soon as possible. The sister and her husband had rented an Airb’n’b in the previous hiker hostel Hiker’s Heaven where I was also invited.

The trail was relatively okay with a lot of similar switchbacks. In one of them I got my periods and had to do bushwacking into the bushes to go to toilet. Periods and explosive poop always want to show up when walking a steep switchback, it is one of the Trail Murphy laws.

It was very warm and I was listening to an audiobook about endurance. Motivation can really improve your performance according to a lot of studies and I was motivated to push on to get some food and wine.

I decided to roadwalk the last miles to the old Hiker Heaven that is nowadays an Airb’n’b apartment. The place was luxurious and had a lot of books and decorations about the PCT. Nine Beers’ sister and her husband had made a delicious casserole and fresh cinnamon buns and had my favourire white wine. Our little tramily was named the Liquor Store.

We had showers and we made footbaths for all of us since the place had some stuff for that. I got to sleep on a gigantic couch that was taking over half of the livingroom. It was unrealistically luxurious.