The Magic of Yosemite Keeps My Hike Going

Not many people have the privilege of saying they have walked into Yosemite National Park, but far fewer get to say they walked into the park twice in one month. With a little bit of luck and some incredible trail magic, I became one of those lucky few to walk into this park twice in the same month.

This day started off like any other on trail—roll out of bed and pack up my few belongings before hitting the trail. My hiking companion, Blueberry, and I had made it to the backpackers camp in Tuolumne Meadows the night before and we were eagerly awaiting a hot breakfast and ice cream.

As we ate, a young man by the name of Pippin rolled up and offered us fresh fruit to go with our breakfast. Instead of the usual apple or banana, he brought out a bag full of pineapples, watermelon, mangos, kiwis, and papayas. My jaw had dropped to the ground because the fruit looked so incredible. Blueberry and I ate our fill, did a small resupply in the general store, and we soon on our way.

The first stop along the PCT is a popular tourist destination—Soda Springs, a carbonated spring. Since it was the day before the 4th of July, the trail was especially crowded. As Blueberry and I walked along the mass of people, a man asked us where we were going and my response was Canada. Note, it has taken me over 900 miles to give that response confidently. This man, however, thought this was hilarious! Both he and his wife chatted with us on the short walk to Soda Springs. Eventually he mentioned that they were heading to Truckee later that day and would be more than happy to give us a ride to South Lake Tahoe for the 4th.

The thought of spending the 4th in South Lake Tahoe was a far-fetched idea for Blueberry and me, but we realized that the daily mileage did not add up. Eventually we cut our losses and decided to celebrate our Independence Day in the backcountry. This lovely couple, Don and Diane, literally placed our dream in our hands. Despite being reluctant at first to accept the ride to continue to make miles, we took the leap. Why not be spontaneous! We were going to Tahoe!

Giddy with the news of heading back to civilization, we trotted back to the trailhead with Don and Diane. After stuffing our massive packs into the trunk of their car, we were on our way. Blueberry and I never really got over our hiker hunger from Mammoth, so the thought of real food was incredible. Lunch consisted of big juicy burgers, greasy fries, and creamy milkshakes. The drive flew by as we exchanged stories with our new friends.

Before we knew it, we were in South Lake Tahoe. A former thru-hiker had agreed to let us camp in her backyard. We said our farewells and Don and Diane were off to their next adventure. After setting up camp, Blueberry and I made our way to the movie theater where we ate popcorn for dinner while watching the new Incredibles movie.

The following morning, I spent hours at a bakery, eating pastries and reconnecting with the world. Before I knew it, the local 4th of July parade was marching down the street. Afterward, Blueberry and I set out to find the beach but got sidetracked by free pizza and the local Patagonia store. 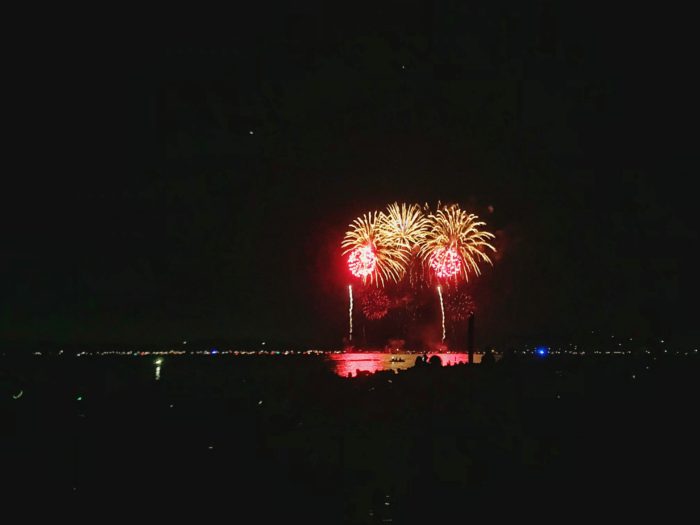 The 4th of July festivities continued as each of us bought pool floaties from a roadside vendor and we were on our way to the beach. Upon arrival, both of us were overwhelmed. Timber Cove Beach resembled something out of a reality TV show about college spring break. Every inch of the beach was covered with beach towels, pool toys, tents, coolers, and intoxicated humans. As chaotic as it was, we knew we were in for some good people watching.

Once my new inflatable doughnut was ready to go, I hit the water. Blueberry and I floated in the refreshing water for hours and watched the carnage unfold on the beach. We were surrounded by every possible inflatable animal—from turtles to unicorns and pink flamingos. With pruny fingers and toasted skin, it was time to leave the beach and seek out dinner.

Despite a growling stomach all day, I could hardly make a dent in my burrito. Somehow, I was able to put down a massive ice cream sandwich afterward. We made our way to the local hostel to meet up with some other hikers before the fireworks.

As twilight approached, we made our way down to the beach. When we arrived, an angry hoard of people stood outside the closed gate. Soon afterward we found out that the beach had reached i’s capacity and no one was allowed in. The true hiker trash that we are decided to jump the fence and enjoyed the most incredible fireworks display I have ever seen. The best part of the show was the reactions of the two young boys sitting next to us. Their ‘oohs’ and ‘ahhs’ brought me back to my days of watching the fireworks as a child in Washington, D.C.

As the finale erupted, I couldn’t help but feel grateful for the incredible gift of being in South Lake Tahoe to celebrate this holiday. So many things fell into place for this spontaneous side trip to work out. This, however, was the calm before the storm because Blueberry and I had planned to hike out the next morning.

Instead of seeking a ride back to Tuolumne Meadows, where we left the trail, we decided to head southbound from the PCT junction at South Lake Tahoe. In hiker lingo, we flip-flopped 150 miles before returning to our status as NOBO hikers. The thought of reunions with old friends on the trail was exciting and we were energized to open a new chapter to this adventure.

As we soon realized, going southbound kind of sucks. Yes, we got to chat with some rad people and yes, I saw people I haven’t seen since mile 109, and yes, I finally saw a bear on trail, but stopping every 20 minutes to explain our story and feeling the section hiker judgment made this flip-flop a mental challenge. Also, a six-day food carry with a bear can is not light and really decreases morale.

The miles ticked by slowly and by the evening of day one of our SOBO adventure, I was ready to quit. I’ve learned that the PCT has an incredible ability to break you down to nothing, but soon you are rebuilt to a stronger, more resilient version of yourself. As I walked with tears running down my face, willing myself to keep going, I began to think of life outside the trail. When I thought of what I would be doing if I chose to quit the trail, I realized that I really had nothing to do. And when I thought about what I would rather be doing in that moment, I couldn’t think of anything else.

The trail defeated me that day. I rolled into camp exhausted, ate dinner in my sleeping bag, and went to bed. The following morning, I awoke with a hope of beating the trail that day. But again, the trail won; this time, two days in a row. Frustrated, I kept pushing, determined to level the playing field. As the miles ticked by and the weight of my pack slowly lightened, I began to feel like myself again. Despite the grueling climbs, I felt strength I haven’t felt before and a willingness to pledge to the grind. Although the miles went by slowly, I knew the playing field with the trail was once again level. 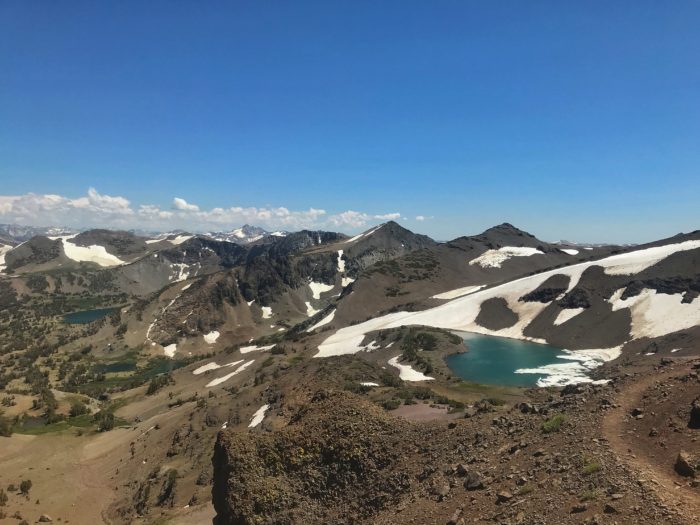 Do I regret going southbound? Not at all. It lead to a great and spontaneous adventure. Over the last few days, I have had so many reunions with incredible people that I may have never seen again otherwise. Returning to Yosemite National Park also created an opportunity to go into the valley and be tourists among the masses of people. Blueberry and I even saw rain for the first time on trail because of this adventure.

The High Sierra may be over, but it doesn’t mean the adventure doesn’t continue. It has taken me nearly a month to go only 400 miles. I had no idea these mountains could be so demanding and slow my pace so much. (A lot of zero days also contributed to the low miles.) I’m ready to take on Northern California and start racking up the miles once again. But first, some touristy activities in Yosemite, sending home my dreaded bear can, and enjoying as many all-you-can-eat buffets in Tahoe. 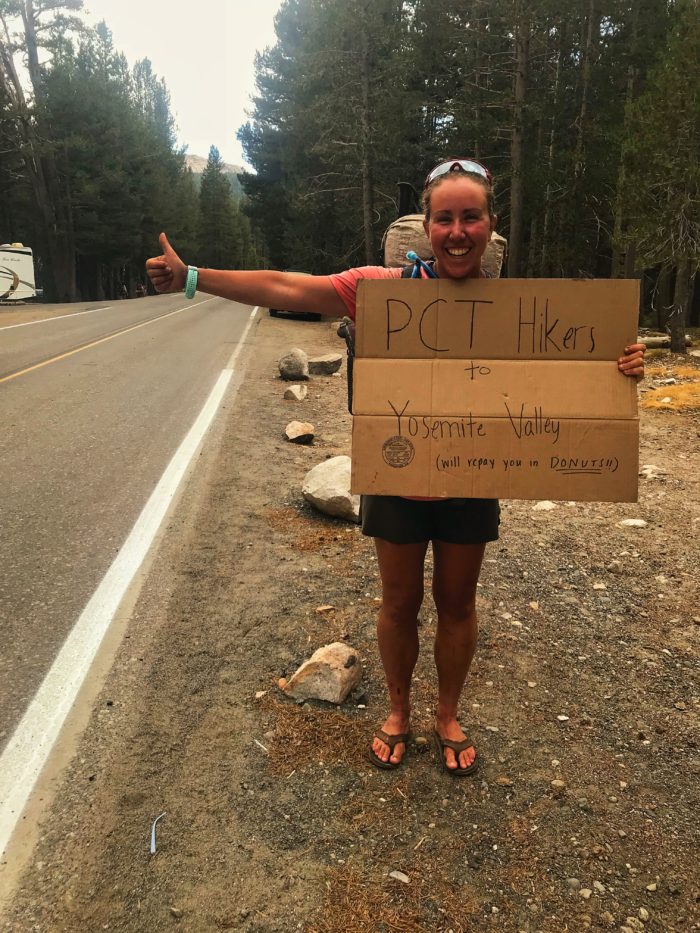