Momentum had carried me forward, the drive to push, up and over Donahue pass, into Tuolumne Meadows. 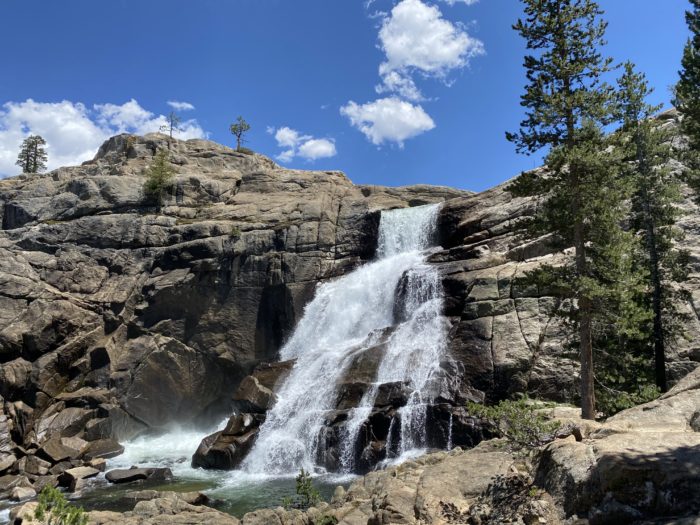 Visiting Yosemite was a dream for me, a bucket list item. It was one of the two parks I had wanted to visit my entire life and achieving that goal while hiking the PCT seemed a special sort of serendipity.

It was also where my hike stalled for eleven days, and sent me bouncing across the state.

The most challenging factor of my hike so far, outside of the hike itself, has been the resupply delays. I am now 20 days behind my original trip plan, desperately trying to make up time all the while trying not to worry about the snows I know are coming at the end of the season.

Eleven days waiting for my package, waiting for my meds that I needed to keep me going. Each day I watched  my reserves dwindle down as my anxiety increased while the time progressed ever onward into the fourth of July weekend.

At least I finally got to see my husband again.

Life on the trail happens off the trail too, in the resupply towns, the days you take to recover or get caught up on work, but by the end of it I was wondering if I should continue.

I had watched Jakko and Pilgrim depart Tuolumne the day after we arrived. Those two stalwart souls had gotten me through the higher peaks of the Sierras. The group I had known and grown accustomed to satelliteing around had all gone, and every day it was getting hotter, and later in the season.

Slowly, summer is building to its crescendo, before the steep decrescendo into the long and cold winter.

There is only so much time left.

Watching them leave was like my time at the Vermilion Valley Resort all over again. This lone wolf hiker suddenly felt all the more alone, with the rest of the Sierra’s awaiting me, but surely, it would get easier from Tuolumne…

No such luck. Mired in expectations and assumptions about how my hike should go, my spirit grew sicker on those thoughts, my motivation became poisoned by my lack of progress.

There’s been a trend, I’ve noticed, with my writing here. How I’ve had to fight the same battles again and again. Highs give way to devastating lows as conditions and challenges set me back.

No matter what I do, I keep falling behind. The budget is in shambles, and in the shadow of those mental mountains came the knowledge with the ticking of the clock that soon I’d be alone again. 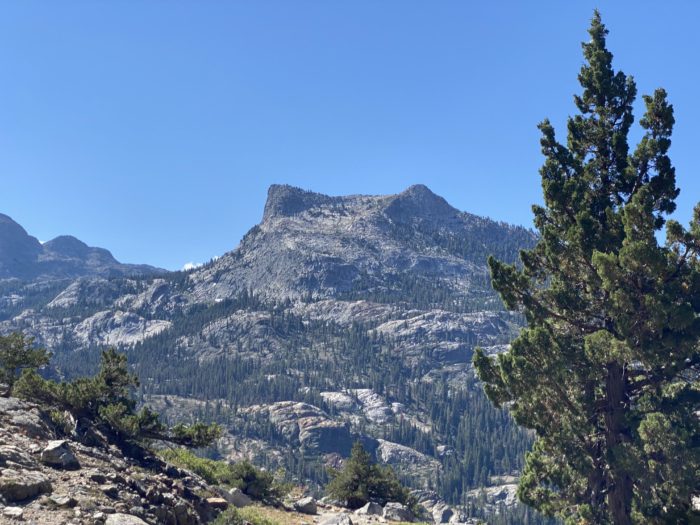 The tears flowed after 11 days off my schedule and routines in shambles as my husband drove me back to Tuolumne meadows.

As he dropped me off and drove away, the forest around me fell quiet. I watched other people off in the distance, hiking their hikes, having their adventures, seemingly having a lot more fun and finding much more purpose than I felt.

Still, there was nothing I could do. My ride was gone, it was hike, or go home and admit defeat.

That thought alone was enough to get me moving. I resolved to get a few miles down, have lunch and see how I felt, prompting myself forward by minor degrees, breaking the day into pieces.

It is the challenge, not the ease of life that defines our souls, that refines our edges, that sharpens us into the people we are meant to be. It is within the crucibles of our challenges that the diamonds of our character are forged.

It would be easier to quit. It would be comfortable to go home, but that is not my purpose or path.  That is surrender and surrender has never come easy for me. Call it weapons grade stubbornness, or a relentless nature, but as much as I wanted to quit in those moments, I just… couldn’t.

It’s not that I have anything to prove, except maybe to myself.  It’s that even on my most terrible, “drag myself along days” on the trail  there’s been some speck of meaning below the emotional tumult that’s pushed me on.

Two miserable days followed. My fitness was off, my new boots were destroying my feet while homesickness and doubt were mixing with the challenge making me question my sanity… again.

I have never thought more about quitting the trail than that time after Tuolumne Meadows. My sense of confidence and purpose seemed lost in the dark to the point I began to forget why I was even doing this.

Ever onward? Ever forward? Every victorious moment I had written about to this point felt suddenly hollow. The steel of my conviction, rusted through.

Week after week I’ve written about how hard this is, only to find some hopeful thread that ends in a motivational statement, but there was no feeling of motivation in me during that time. Every lesson learned, everything I’d overcome felt like a shadow.

Would North Kennedy Meadows be the end of my journey? Was I going to finally give in?

I decided to leave a thousand times a day, until I finally got a signal, and called back home.

“I think there is something wrong with me.” I told my husband, pausing to take a long, ragged breath. “Everyone else seems so in love with the scenery that they can ignore the fact they’re suffering. Sure it’s beautiful, but parts of this still really suck, and I can’t deny that.”

I swear I heard thunder at the conclusion of his words. (Maybe it was the 6.0 earthquake, I don’t know)

I stopped, blinking, wide eyed, knowing he was right. Crossing a thousand miles the day before had buoyed my confidence, but my ship was still taking on water, however with his words suddenly the fog lifted. 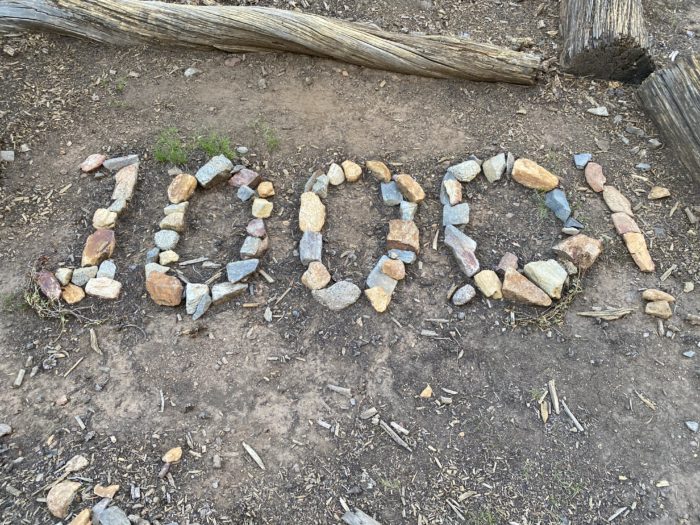 Suffering is inevitable, but misery is a choice. I was letting every delay, every moment of loneliness take me away from the fact that this is my time to adventure, to discover, to dig deep within myself and face the challenges of the Pacific Crest Trail. That amidst the bugs, the blood and the blisters, there’s something more real, and more alive in my soul out here then back in the civilized world with its comforts and conveniences.

The challenge is the shadow, made stark by the intensity of the light that defines each victory, each milestone, each sacrifice that yields the gains I have made so far.

One thousand miles, almost half way, with Tahoe closing, and with it the end of the Sierras. Still, I no longer expect it to get easier. It’s not about it getting easier, it’s not about being comfortable, it’s about what is right for me, what is my path and my calling. 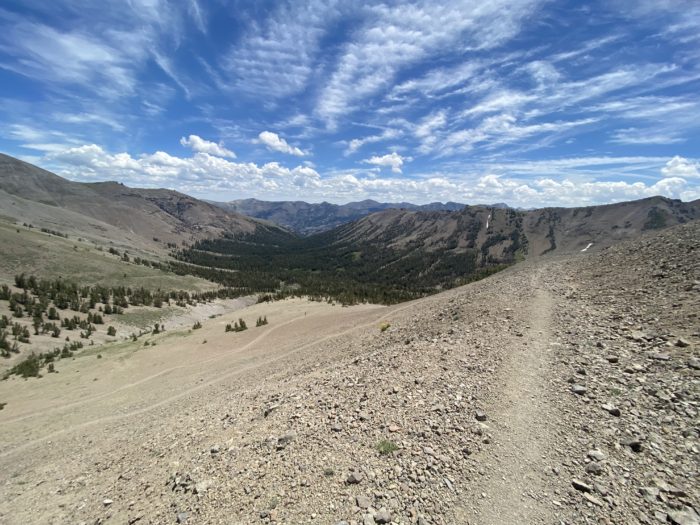 To wander, to know these wild places while they are still here, to bring them to people through my writing, to those who will never have the chance to see them, and to answer the song of wanderlust that has always lived within my spirit. This is why I’m hiking the PCT, it’s not to be comfortable, it’s not because it’s a life of ease, or even because it’s fun.

Fun happens, sure, but some days it’s all work, it’s making the decision to take the next step, to push through the burn, to look beyond the immediate towards a far horizon, and when I forget that, when I let my vision become nearsighted, I lose focus on my why, which poisons my heart.

It’s not about what’s easy, it’s about what’s right, it’s about the choice and the love of experiencing good, bad and otherwise. When I am near the end of my life, and unable to hike, unable to explore, unable to venture out into the wild lands that I have always loved there will at least be the memories, the knowledge that I could experience, that I dared to push, that I overcame.

My hard days are not over. They will come just the same as good days will, but I will go through all of it with my heart open to whatever will be without regret.

I’m almost halfway home, but already planning a hike of the CDT in 2023. No matter the challenge, deep down, I know I’m just getting started.