The Tip of the Iceberg

Through this section we had some fun and saw some of our favorite views so far on trail.

This day was a little bit of a challenge but it had its awesome moments. We walked by Dorothy Lake and saw how beautiful it was and then we got a little lost and ended up finding an iceberg. Cody’s exact words were, “Should I do it for the gram?” (A new slang term kids are using for Instagram.) He immediately started undressing and swam out to an iceberg in the midst of the lake. His breath was ripped from his lungs in the numbingly cold water but it was a short swim. He clambered up onto the berg, toes squelching into the softening snow as Kelsey asked him to climb higher up to where the lighting was better (hehe). The photos were taken and he slid back down into the freezing water and swam back to shore to dry off. 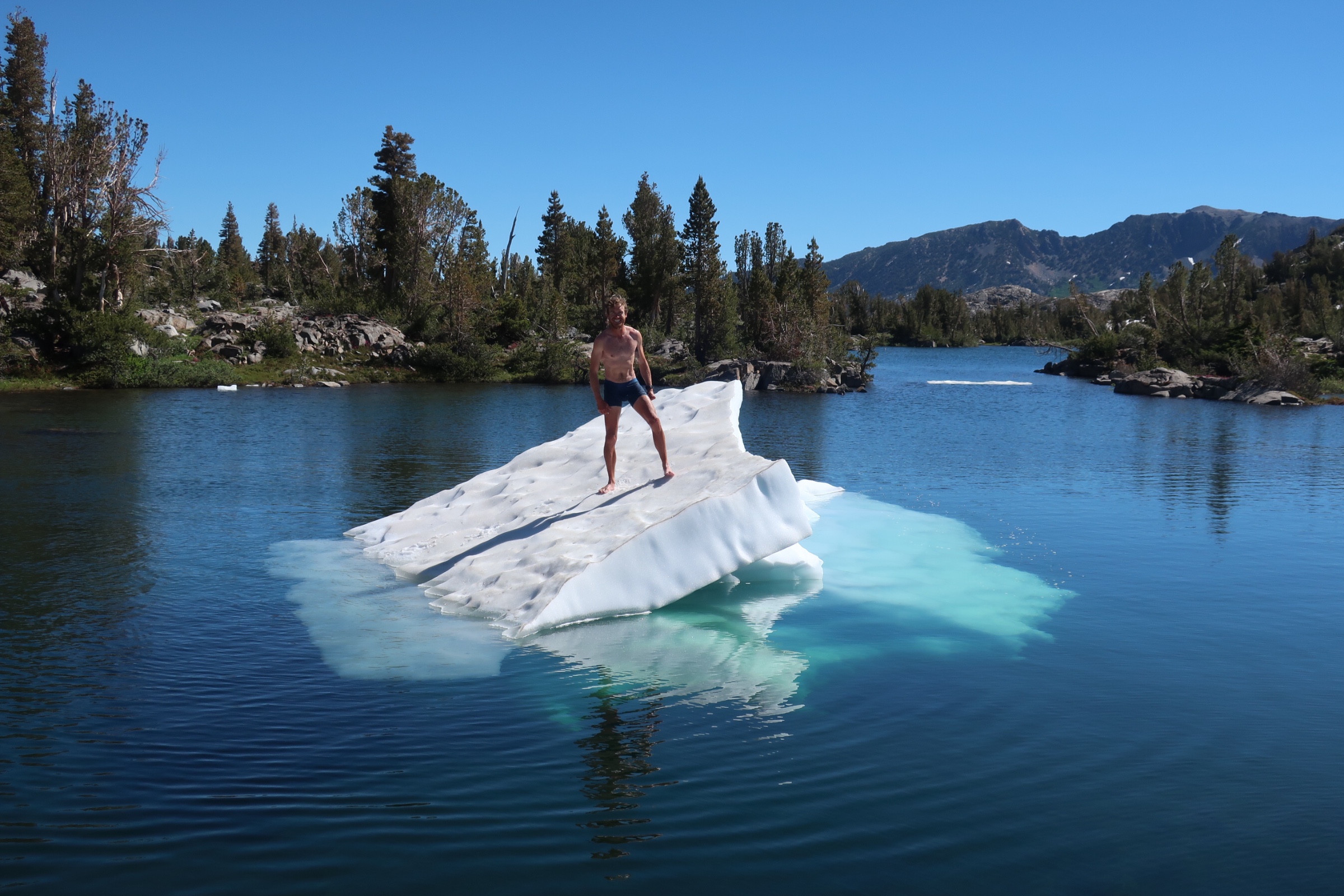 After Cody warmed in the sun for a bit we decided it was time to start hiking once more. Shortly thereafter we hit the 1,000-mile mark and felt a rush of excitement and pride! 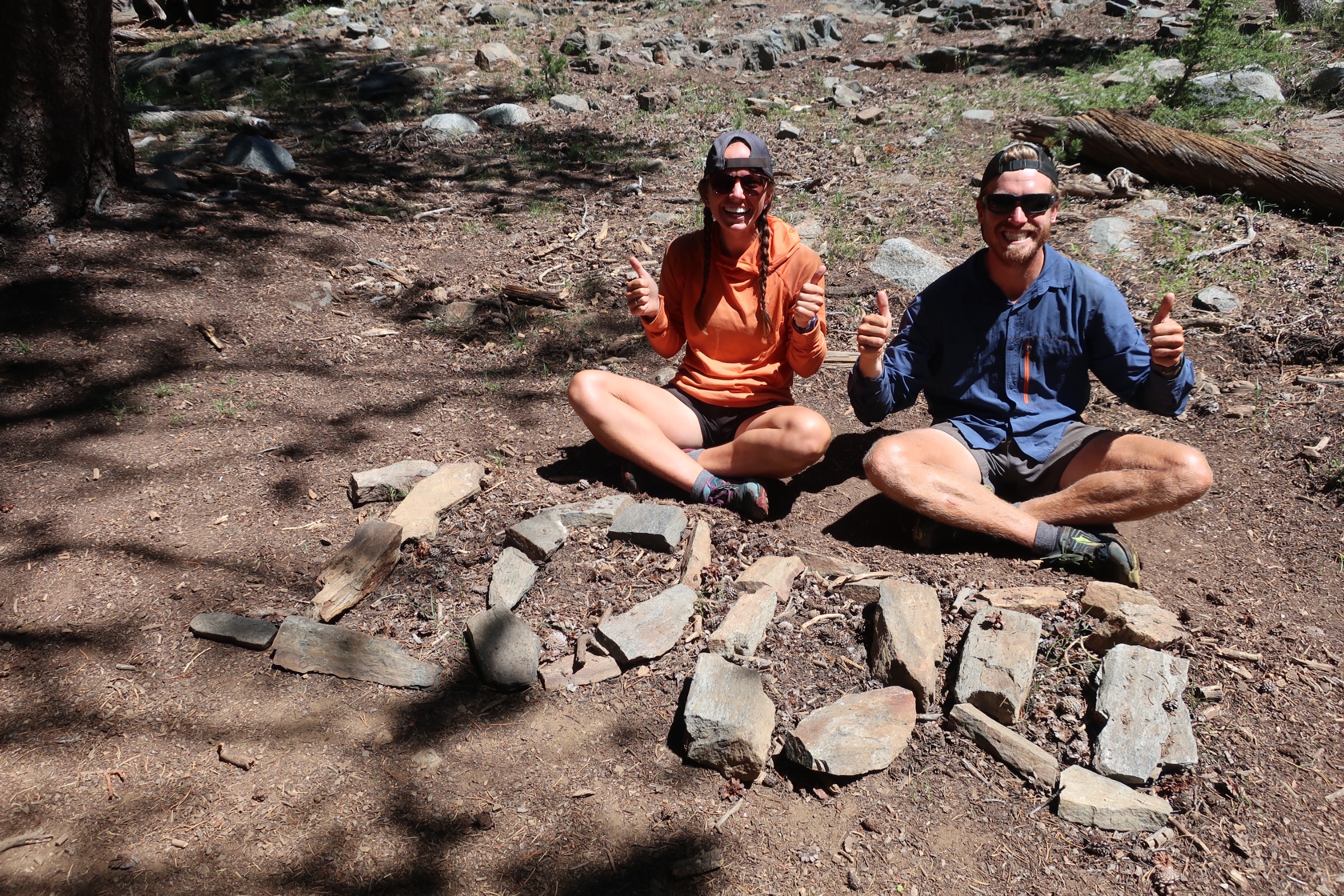 We had some climbing to do but the scenery had started to change. The peaky Sierra Nevada started to get a little greener and more rolling. All of those climbs and passes were getting farther and farther away. We started up a climb that was covered in snow and absolutely beautiful. 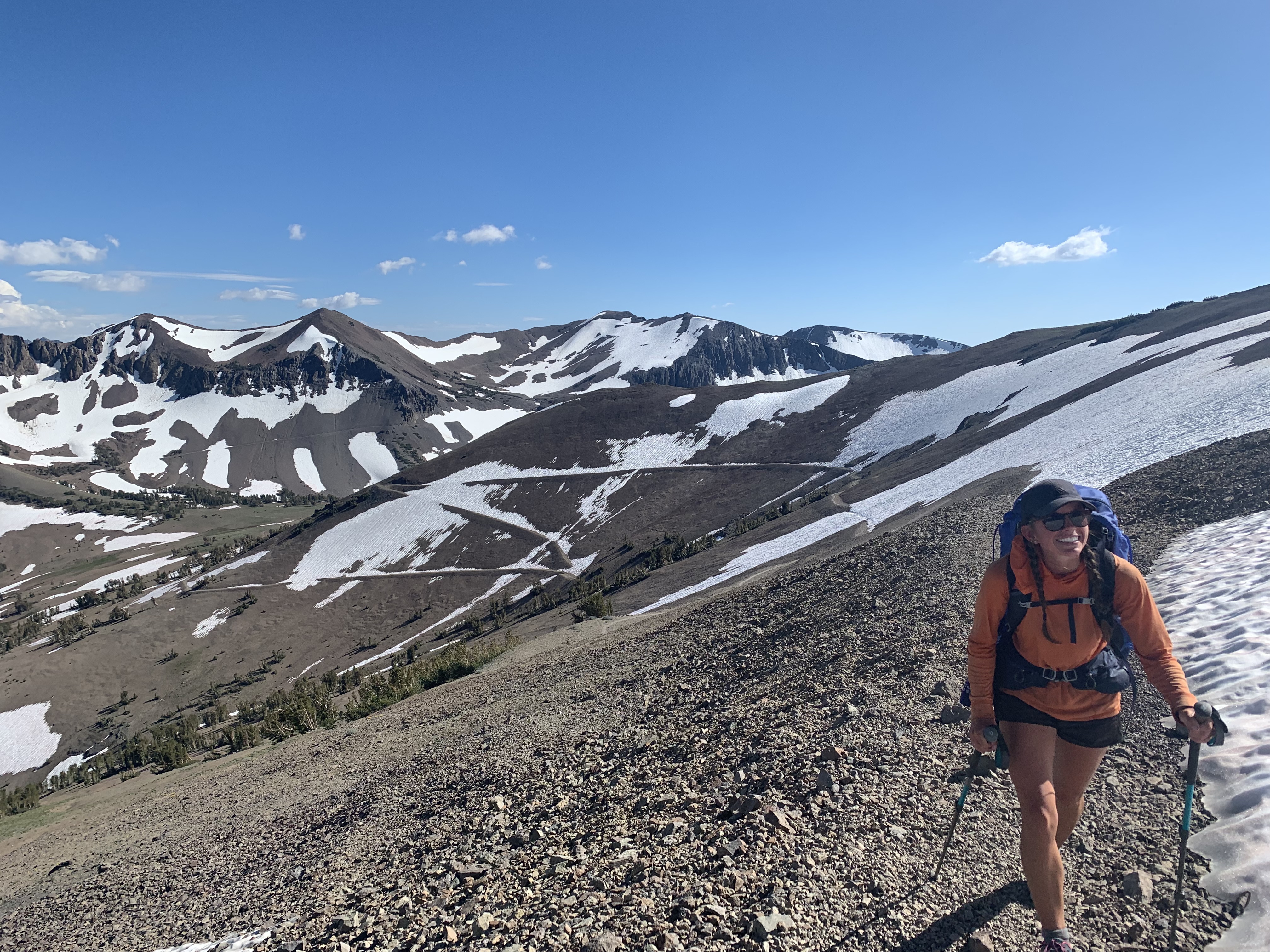 You can see the backward “Z” switchback in snow.

Little did we know, the top of that climb would become Kelsey’s favorite spot on trail so far. It was like hiking up into another world. Views unlike any we had seen on trail so far blanketed our view in all directions. This was the section directly before Sonora Pass and it was a place we would love to visit again one day. We hiked along a ridge that we eventually camped on and it was by far the coolest tent site yet. 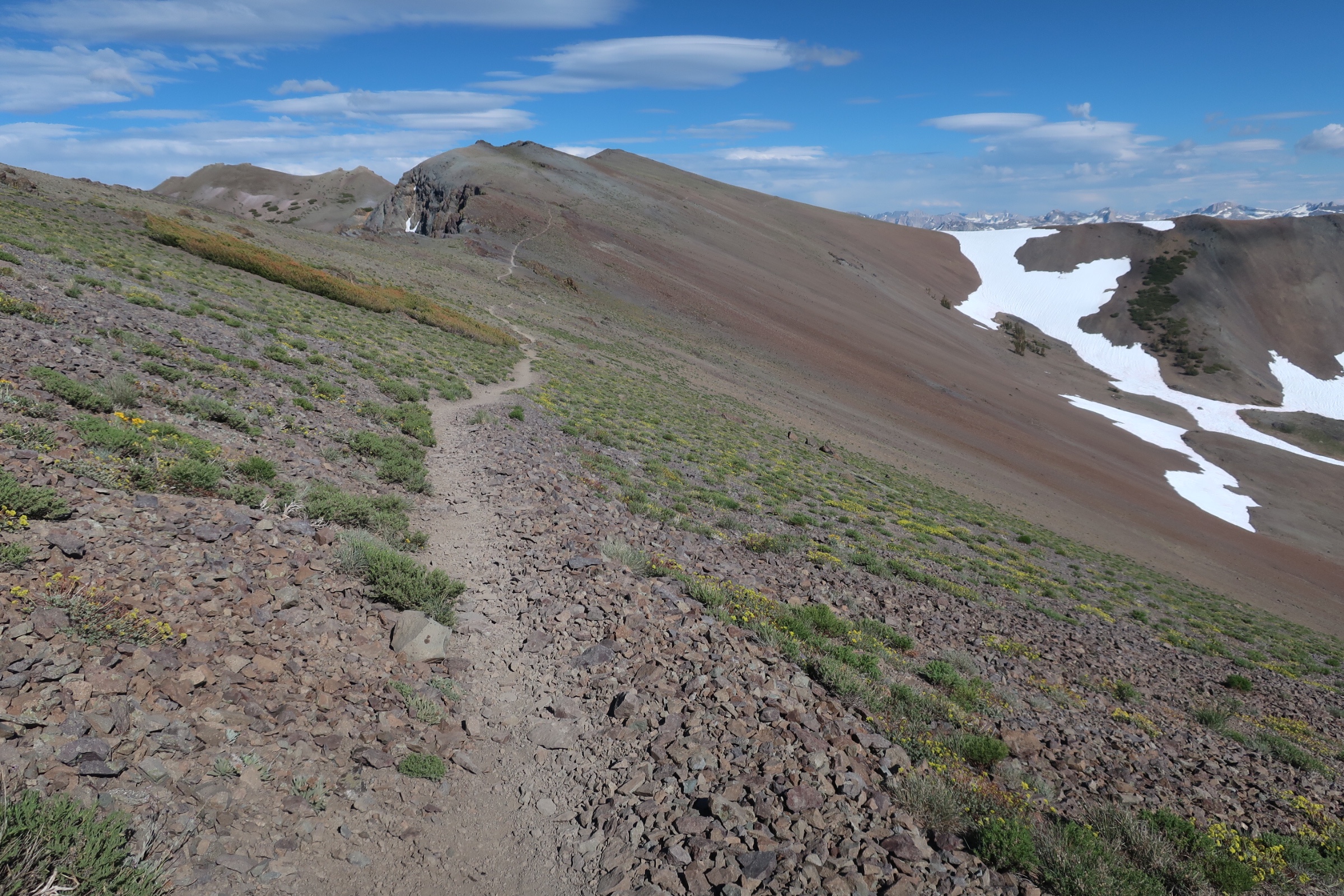 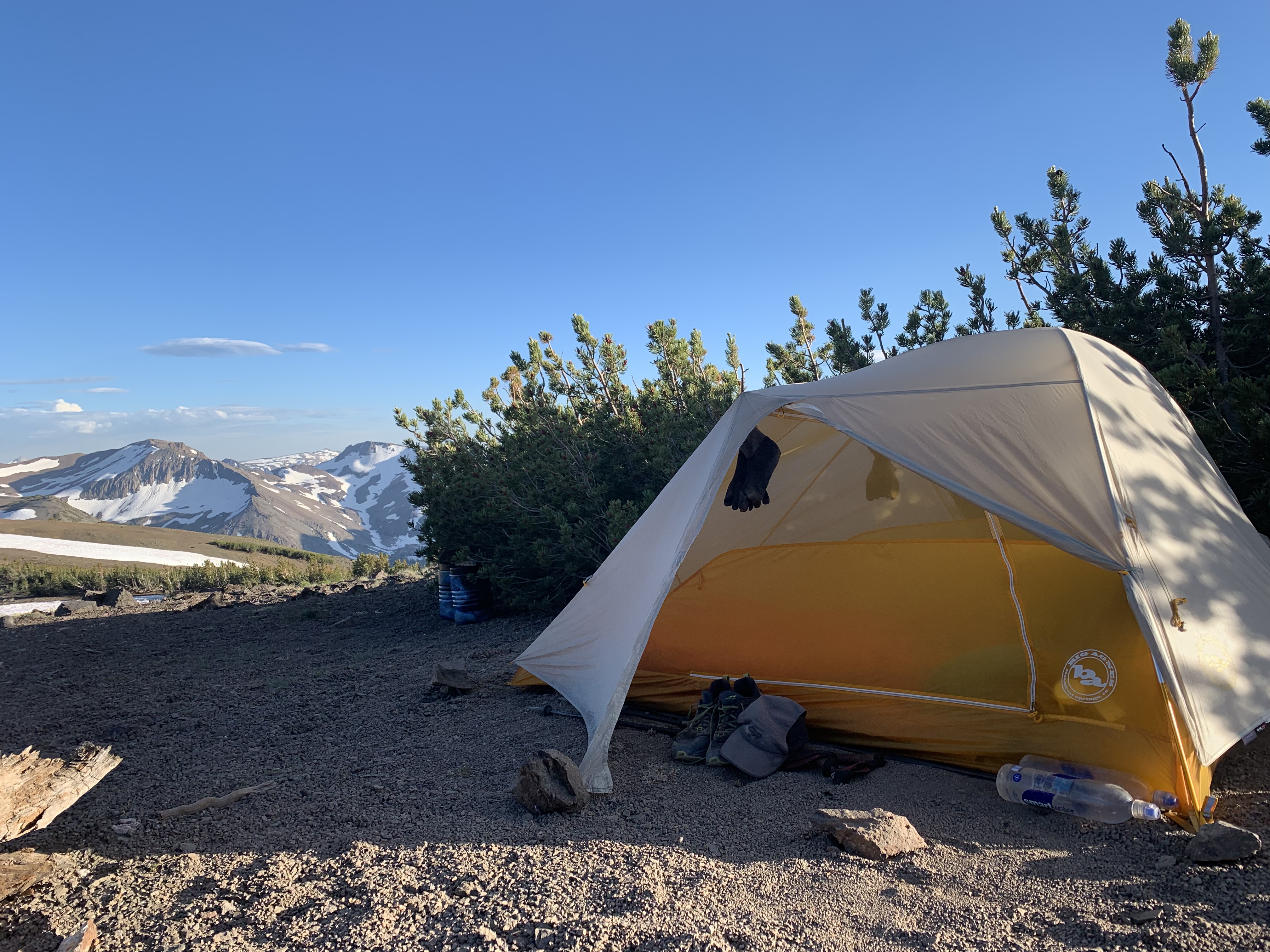 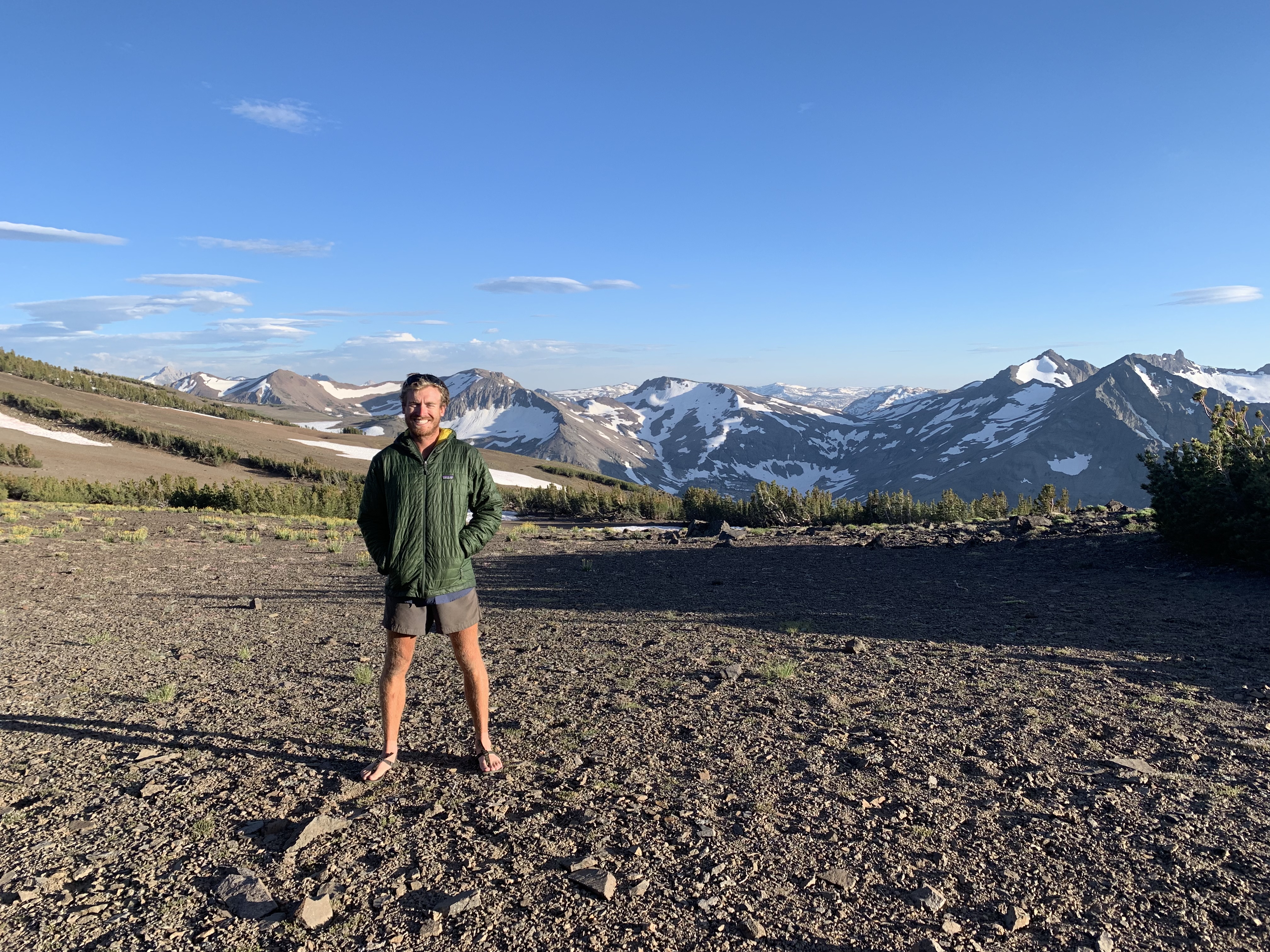 We then were blessed with an amazing sunset to end our day. The harder days on trail always end up rewarding you in one way or another. This one just happened to be one of our favorite rewards. 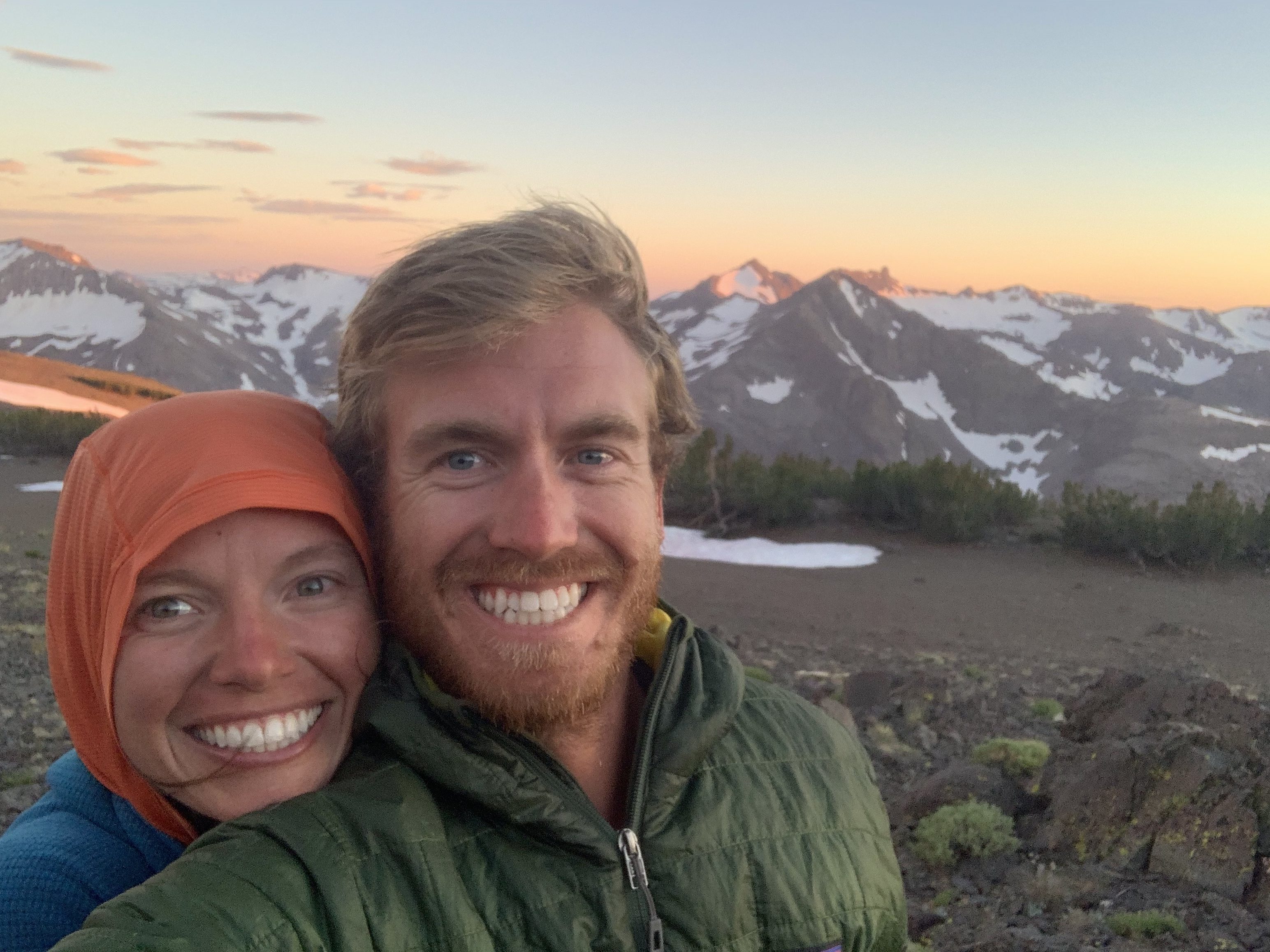 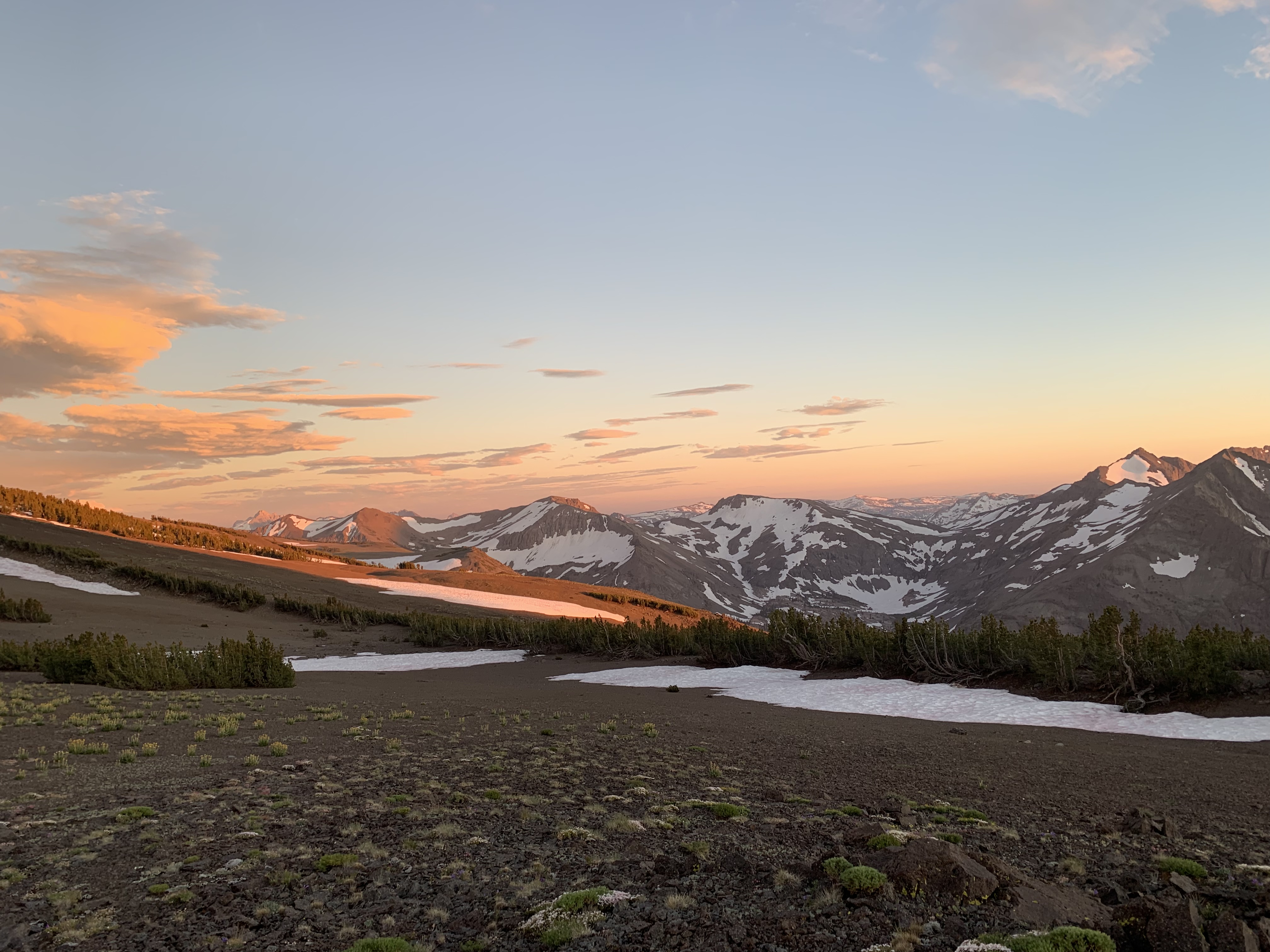 We awoke at 5 a.m. excited to get into town. We were stopping at Kennedy Meadows North, a guest ranch that specializes in pack tours with mules and horses. The hiking that morning was incredible, a lot of volcanic rock and moonscape looking terrain. It was just so different looking from everything we’ve seen so far that we were blown away. 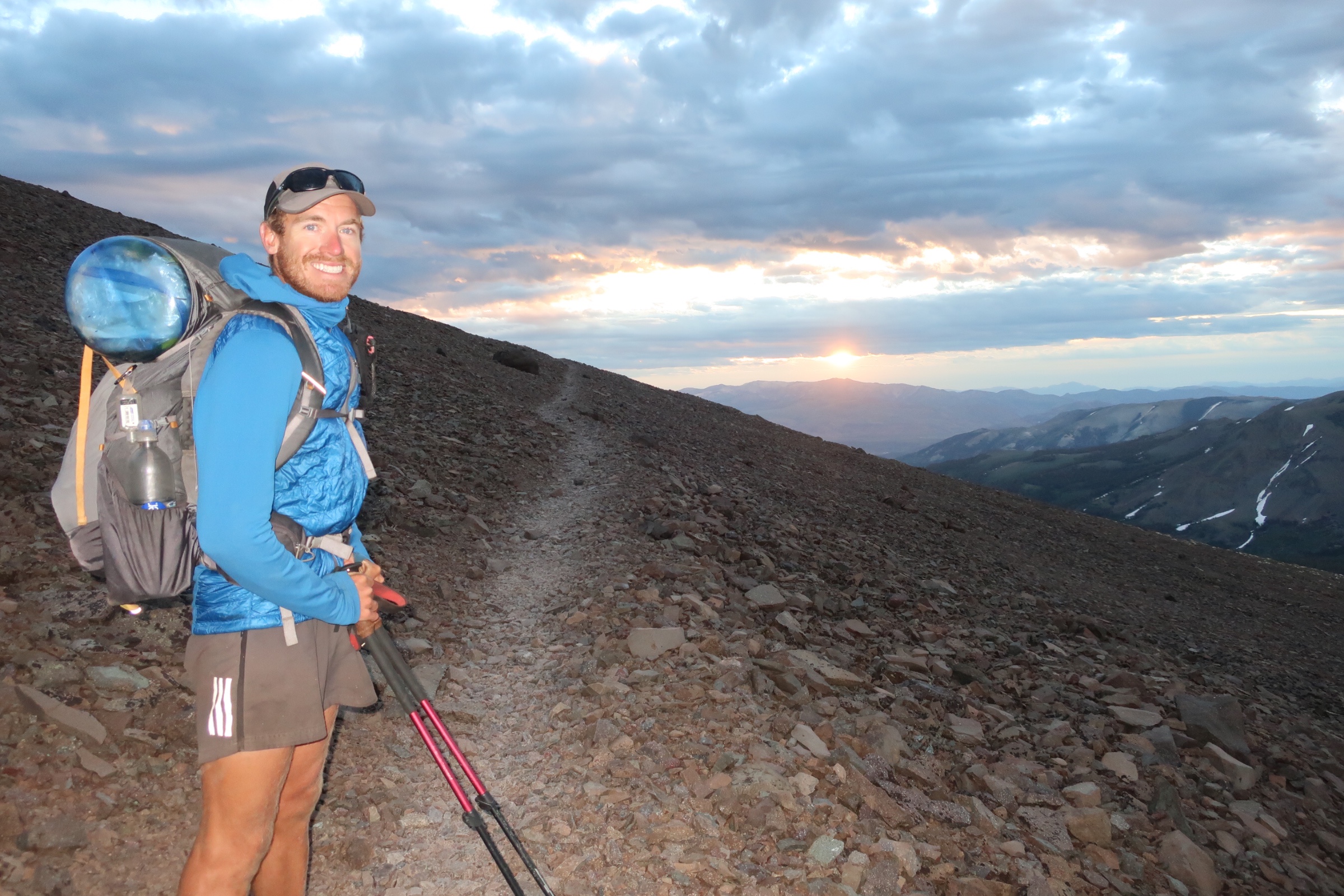 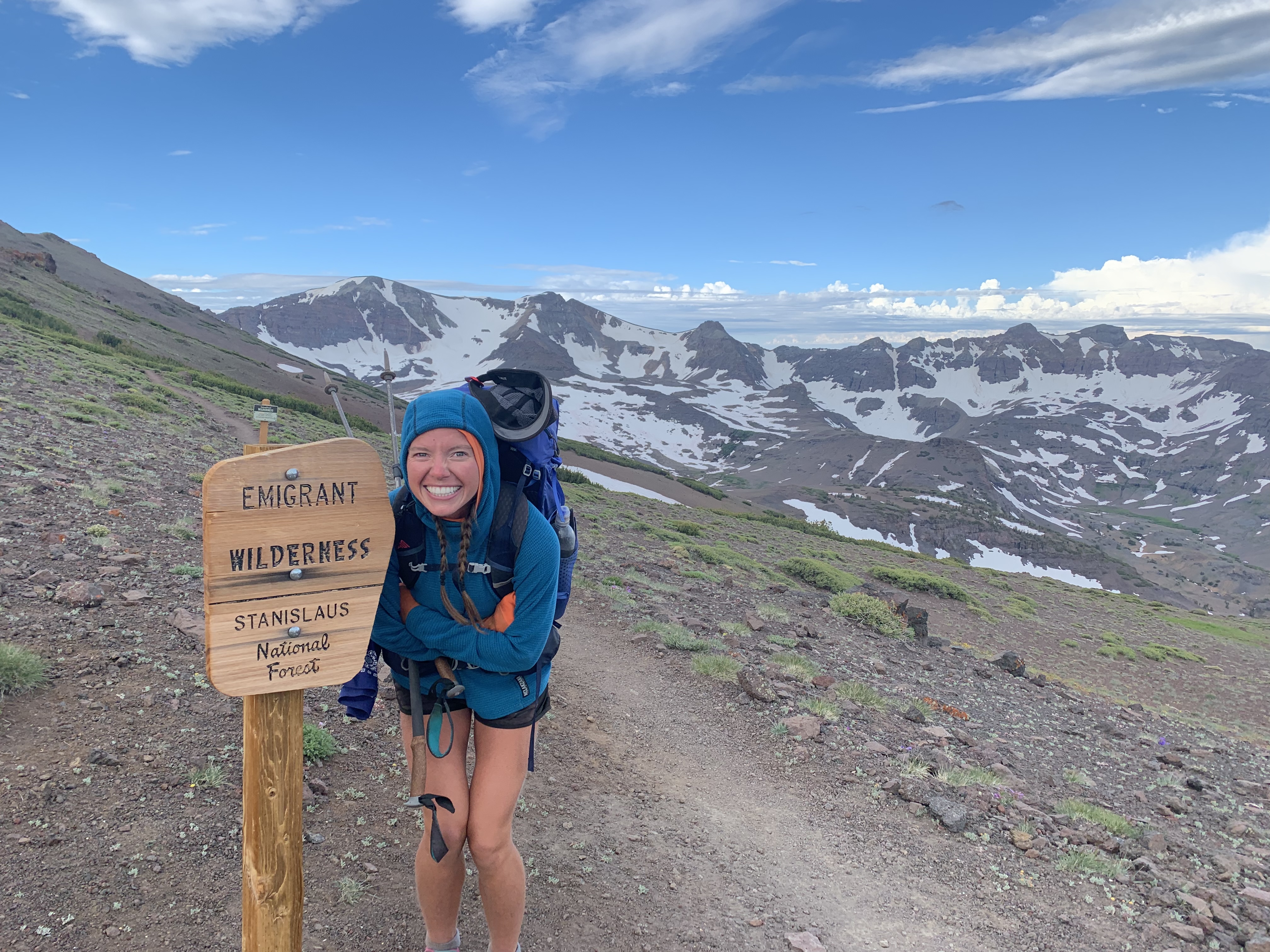 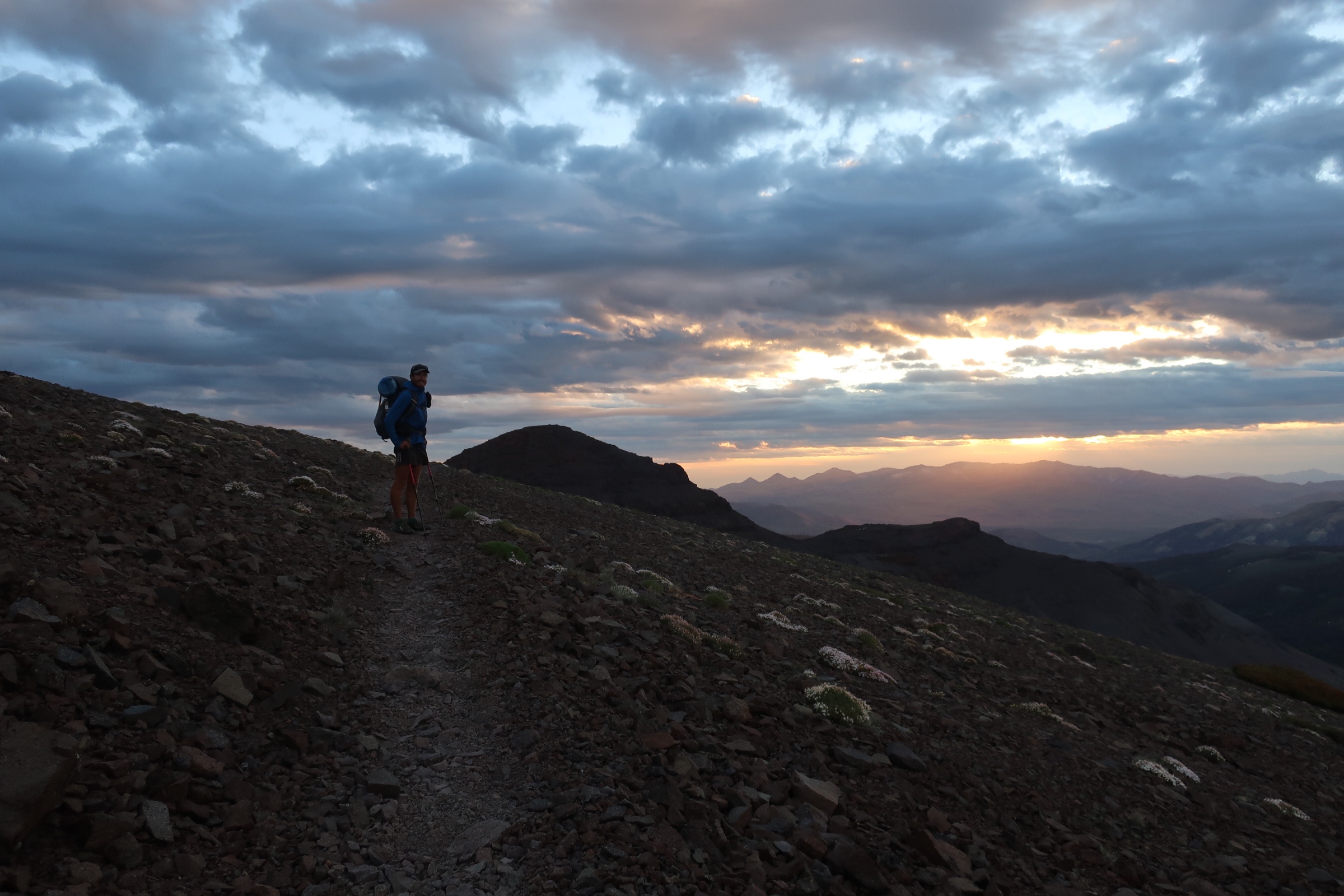 Toward the very end of the hike we had our longest, steepest, and fastest glissade to date. I have video evidence but I will explain Cody’s ride to the best of my ability. He sat down in the slide and was almost immediately going 15 mph, completely out of control. His water bottle launched out, he lost his pack cover, and next thing I knew he was flying out of the shoot and butt-jumping over sun cups and heading straight for a mound of rocks. I would swear he never once tried to slow down, he was probably having the time of his life while I was watching from above terrified I was going to have to drag his mangled body down to the road by myself. I was laughing while re-picturing the glissade for the rest of the morning. (Just realized I could insert the video, YES!!)

After the glissade we arrived down to the road for Sonora Pass quickly and started to hitch. We were picked up after about a half hour and rode in the bed of a truck getting so see the awesome views all the way down the mountain. 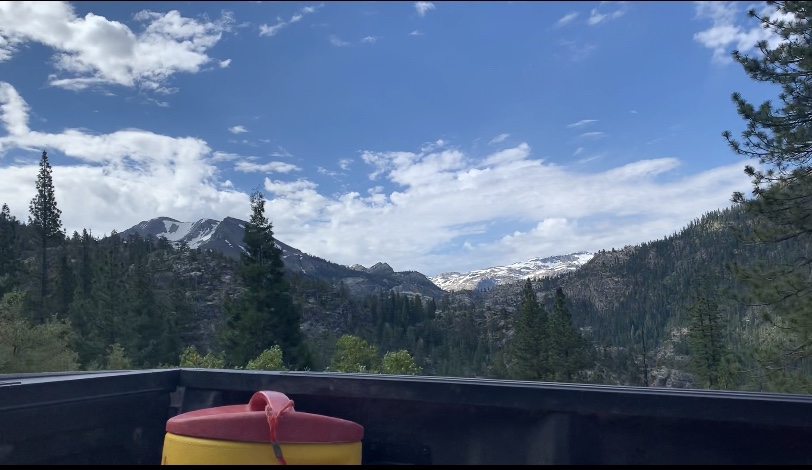 Views from the bed of the truck. 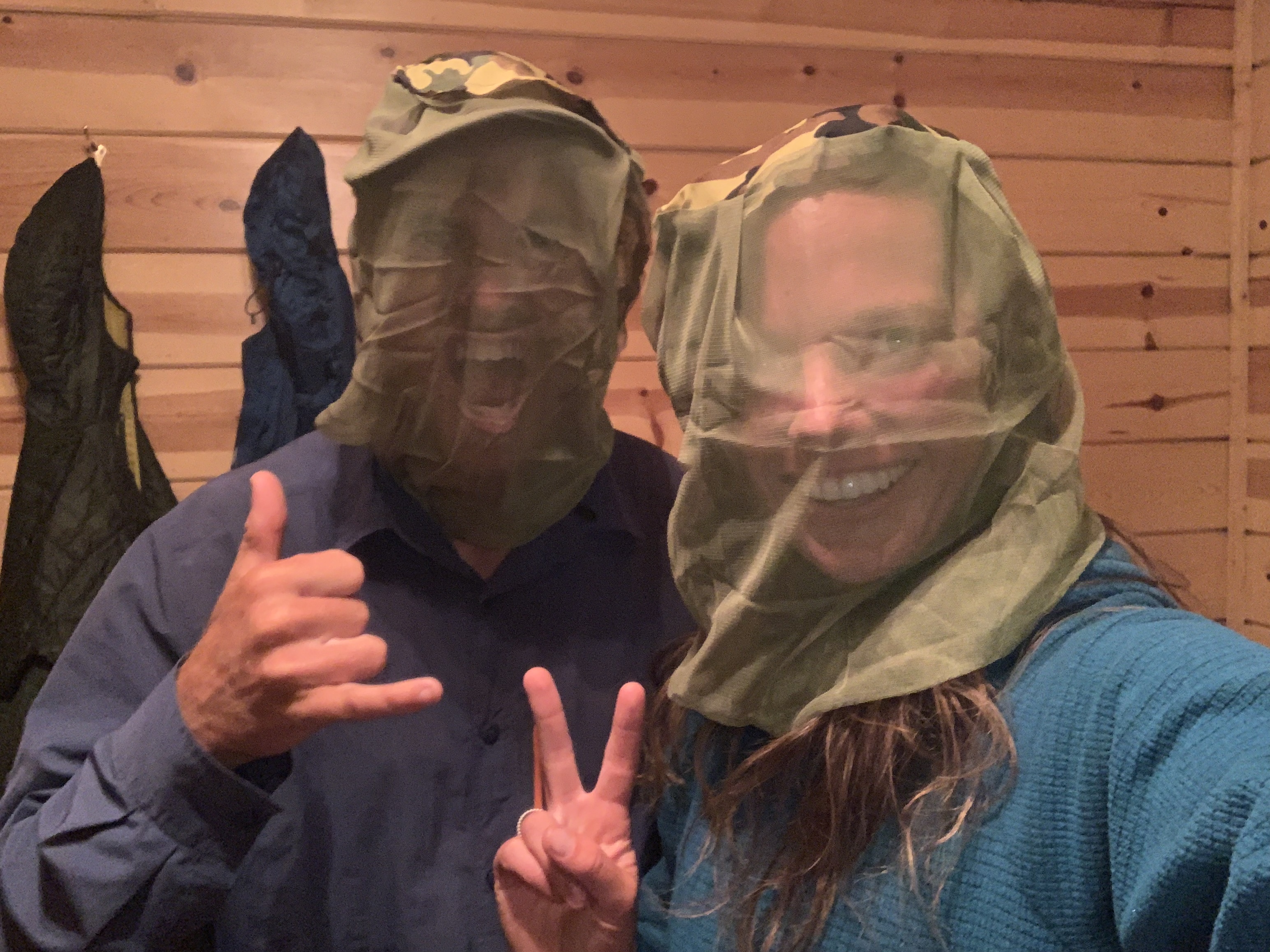 We arrived at the General Store just in time for breakfast. We chowed down before tossing in some laundry and taking showers. We resupplied and then relaxed the rest of the day. We found some bug nets to save ourselves from the pesky mosquitoes and ate A LOT of ice cream.

Kennedy Meadows North ended up being one of our favorite spots so far. Everything was so convenient and well priced. In big towns we find ourselves walking around all day trying to get chores done and never really getting to just relax. This was not the case at KM North. We got everything done all in one place and could just hang out the rest of the time. We chatted with the owner and his daughter and several of the guys that work with the pack teams. Everyone was awesome and liked learning about our travels just as much as we liked hearing about theirs. They have 150 horses or so that they take out with them on trips. It’s a really cool thing that they’re doing and we loved how hospitable they were to us hikers. 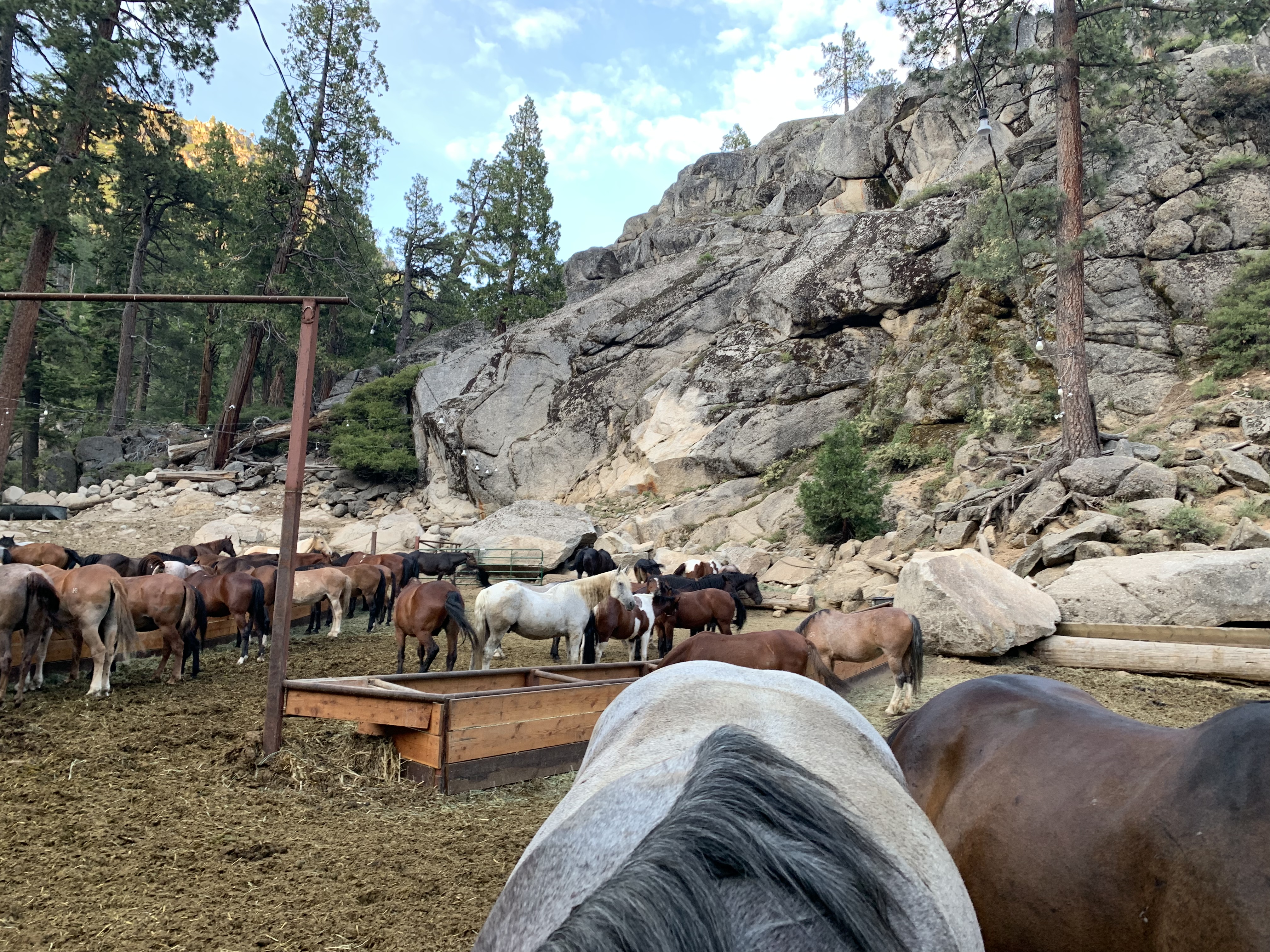 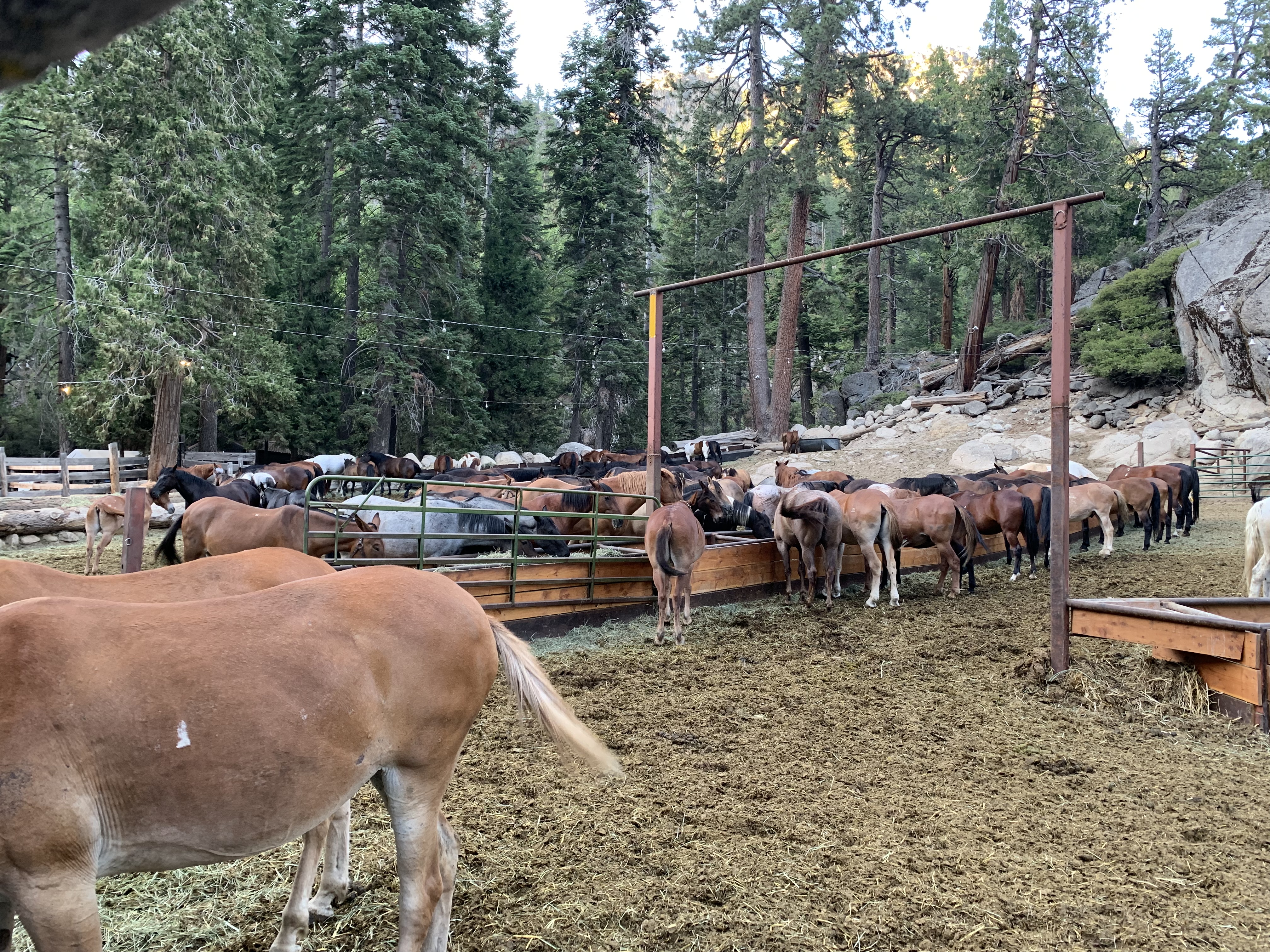 We had dinner at the General Store, Kelsey had the freshly caught rainbow trout with a baked potato. We saw so many trout up in all the lakes through the Sierra so she thought it was a necessary meal to try for the first time. It did not disappoint! 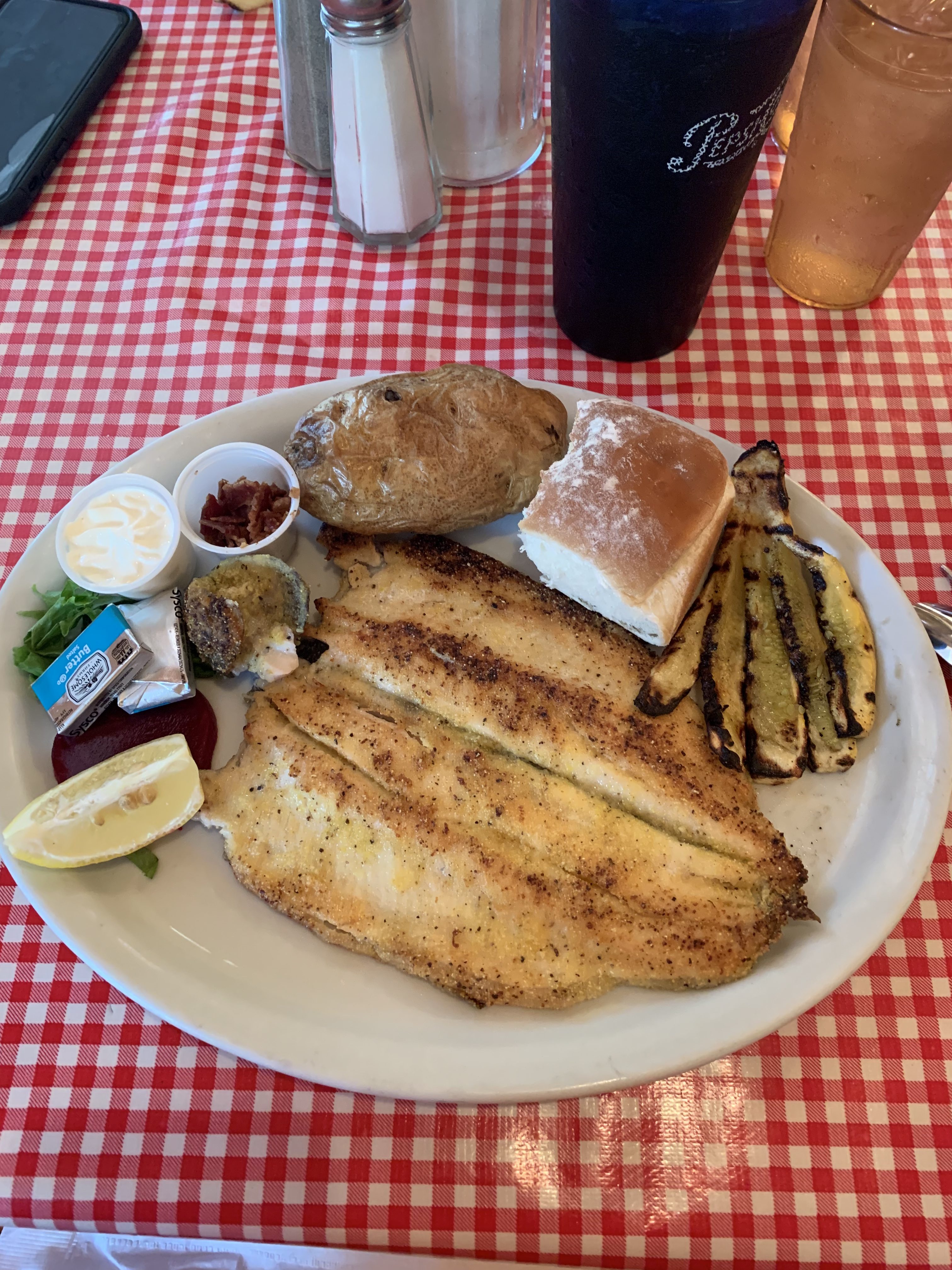 We began our hike after a delicious breakfast and then a shuttle back to the trail at 10 a.m. It was really beautiful hiking until Kelsey realized she was without her hat. She left it hanging in a shower stall at KM North and realized it far too late. A hat is a very sad thing to lose and she would have to rely on sunscreen for the next few days . 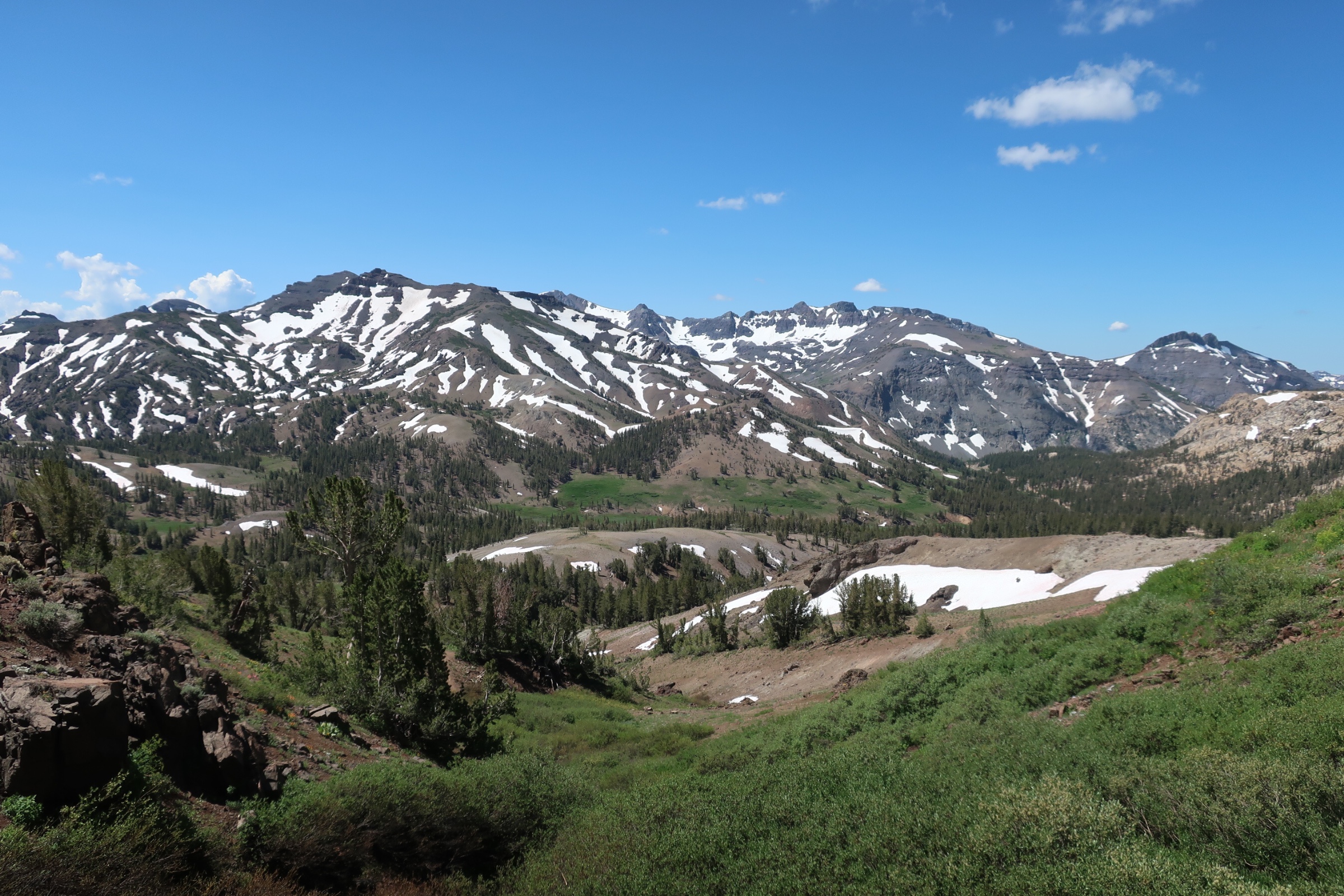 We packed our lunches from the General Store and they were the best; ham sandwiches, chips, an apple, Payday, and a water. It was a much better lunch then we would normally have packed for ourselves so it was a nice little treat. After lunch storm clouds started rolling in and we threw our pack covers on just to be safe. While putting them on it started hailing like crazy and rained on us for about an hour and a half. 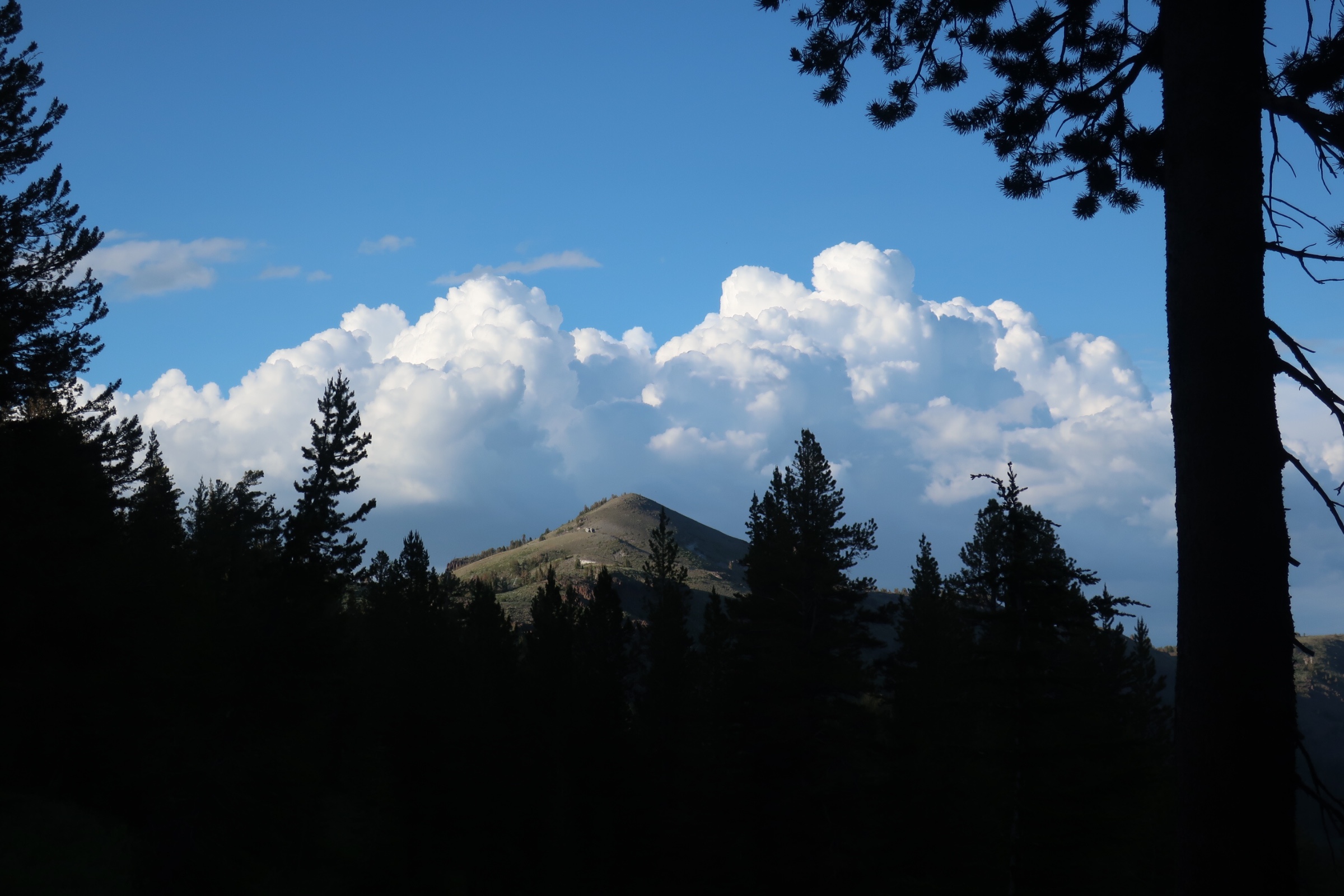 When the rain subsided we let our rain jackets dry off and then continued cruising on. The rest of the day was uneventful until we got to use our new bug nets in camp when the mosquitoes swarmed.

We awoke and began our hike and saw storm clouds looming around all day. It was (once again) really beautiful hiking and we were fully enjoying ourselves even through the sparse little snow fields. 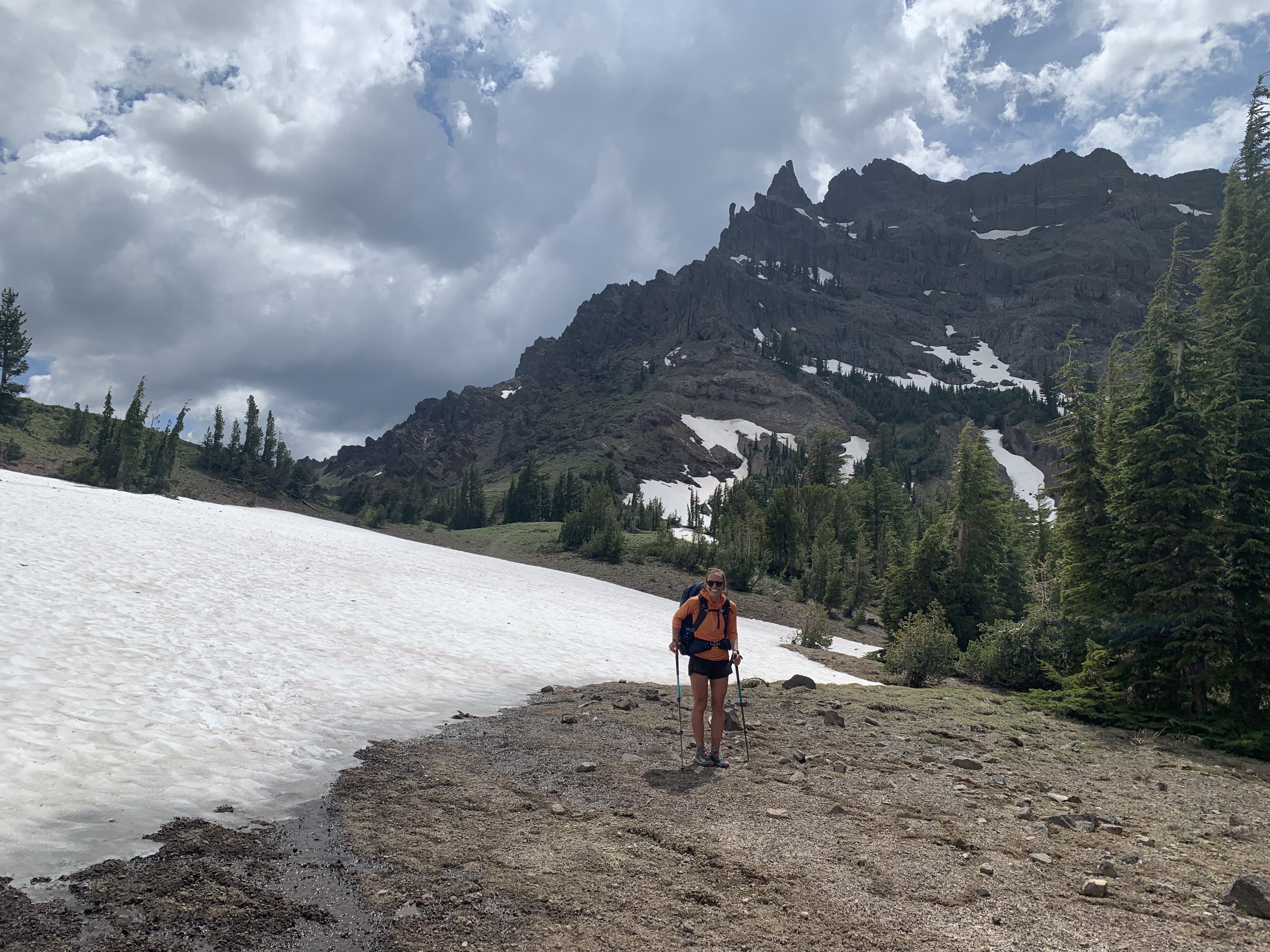 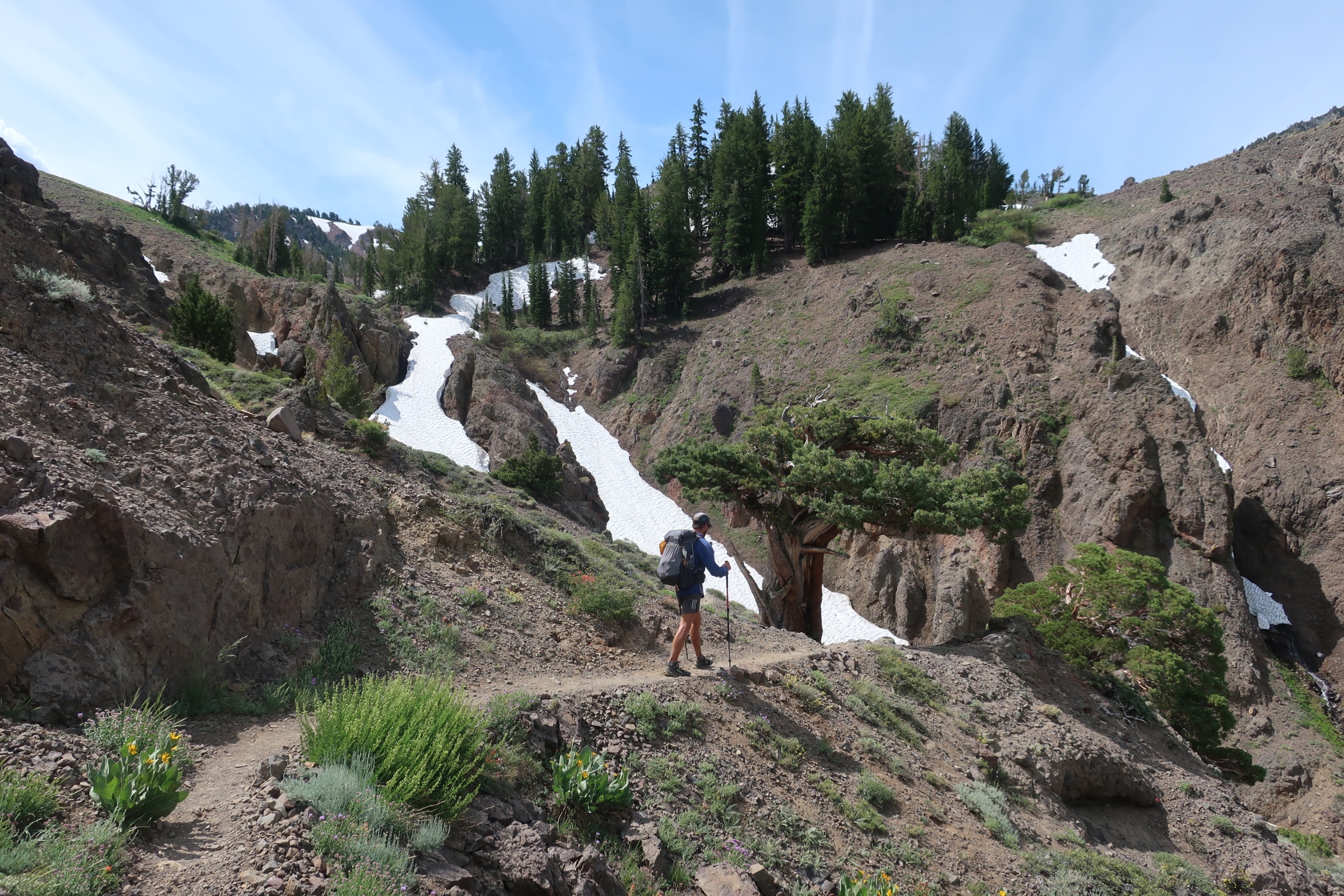 We went up a pass and then clambered back down, beauty around every corner. The storm clouds provided their own beauty since we’ve not really even seen clouds for a while! 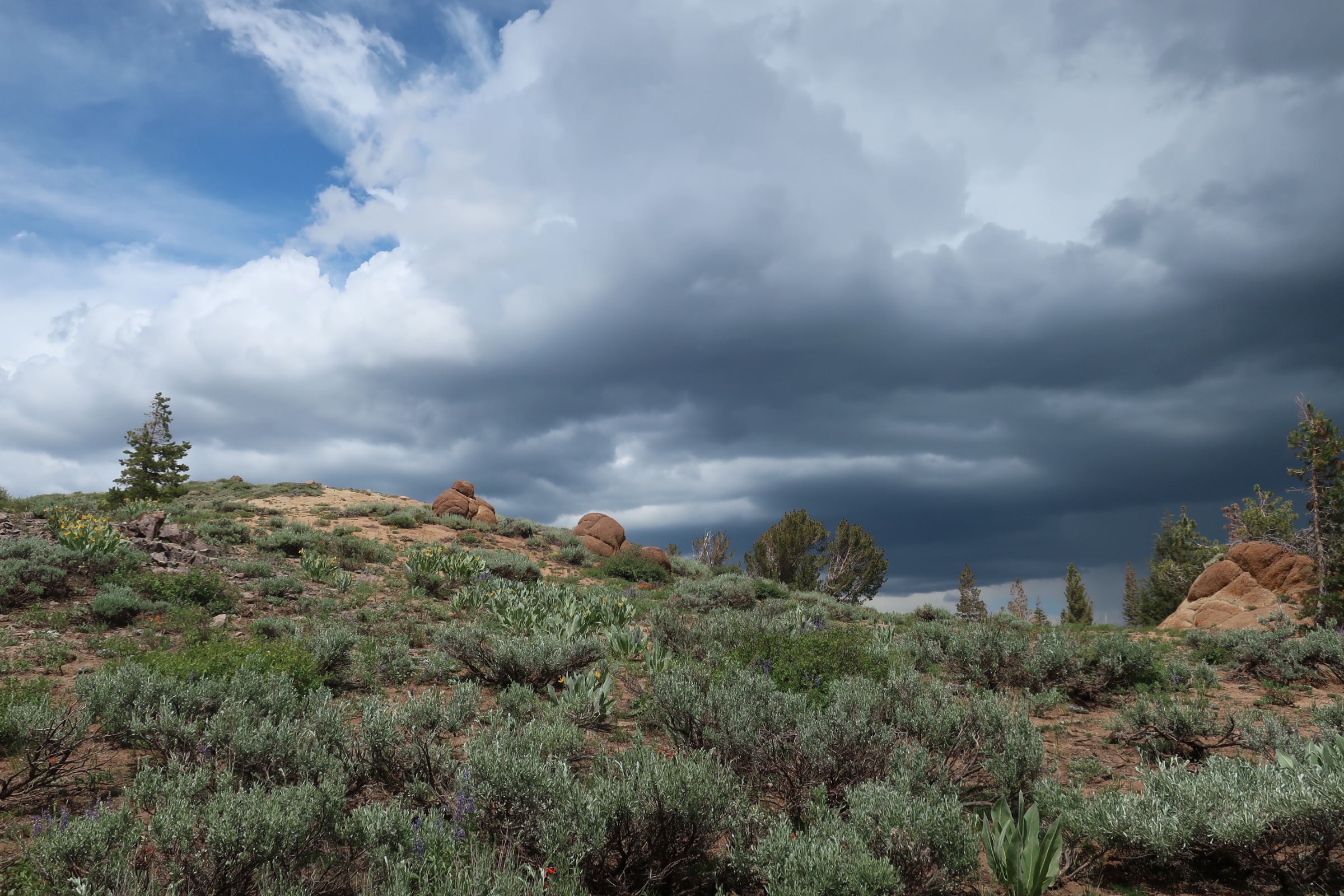 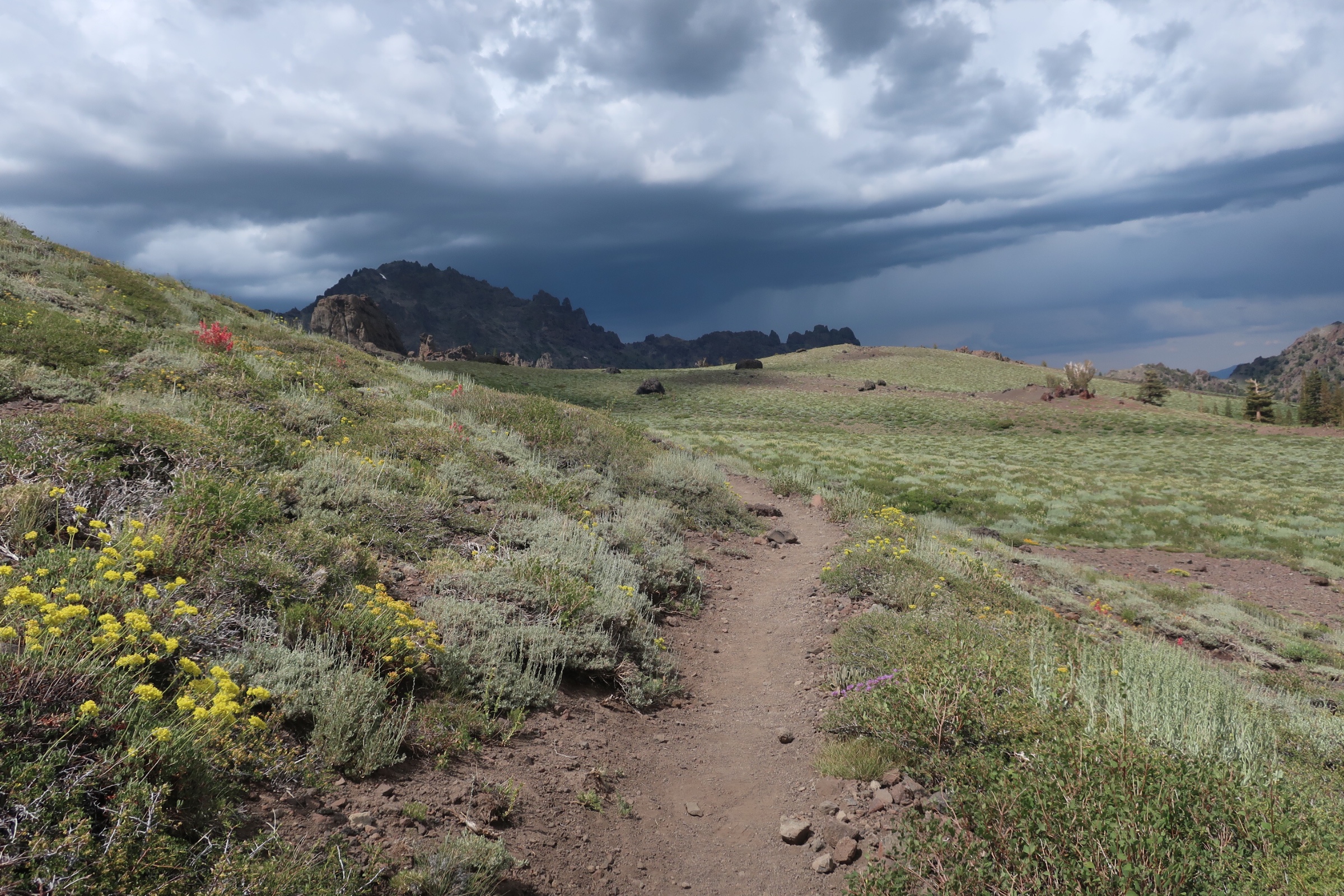 The storm was looming around us literally all day. It thundered and lightninged in the distance and we picked up our pace to try to outrun the beast. We were cruising along and in the last hour of our hike it finally started to sprinkle on us. I would call that a pretty lucky break! We passed our tent site to grab some water and when we found we had to go decently far, we decided we definitely didn’t want to turn around to set up camp. We pushed on farther even though our bodies were screaming not to. It turned out to be a great decision. We had an awesome tent site and even saw a double rainbow poke out while we ate our dinner. 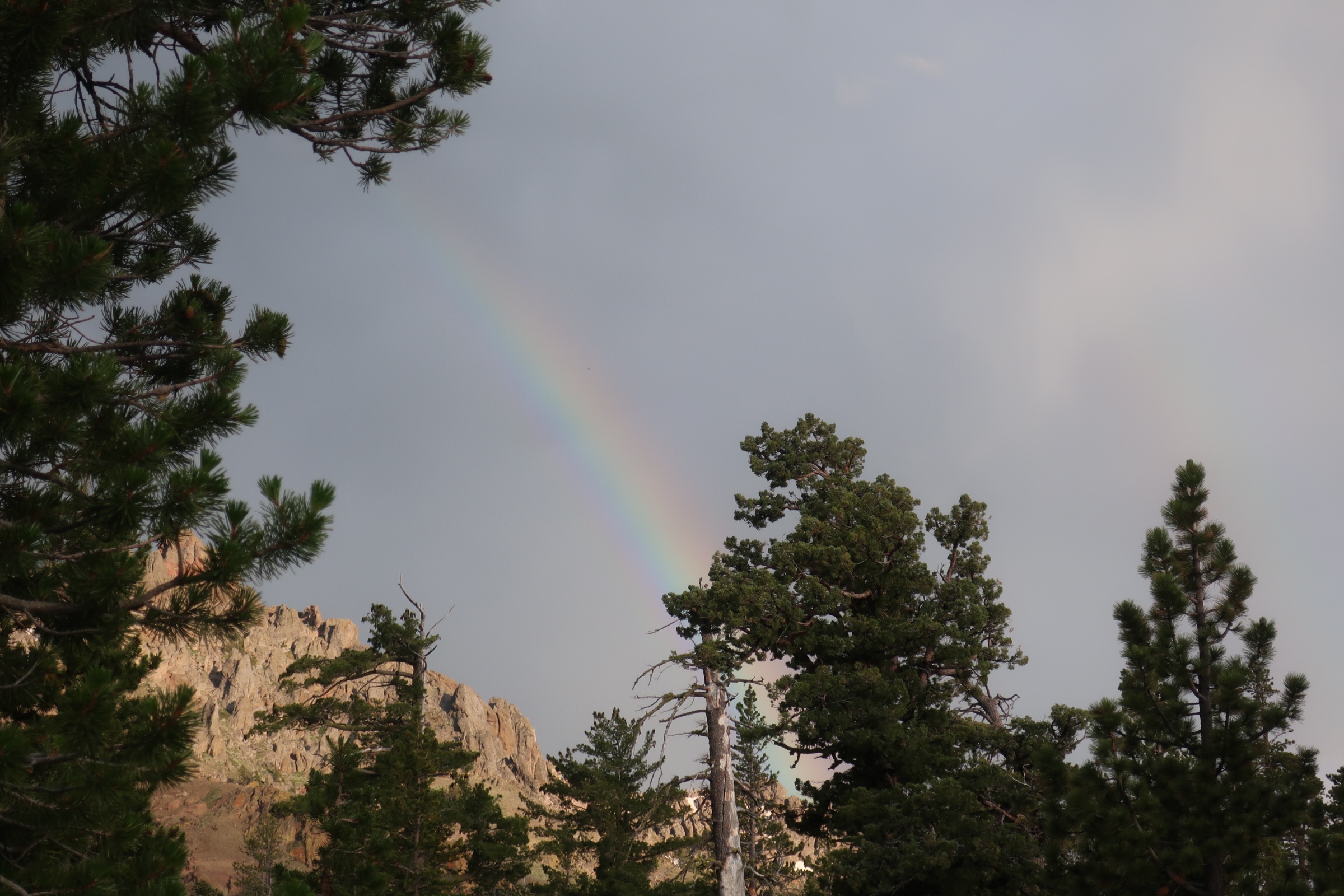