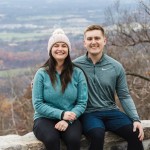 Here are some of the highlights from our few days exploring the city before starting the PCT. 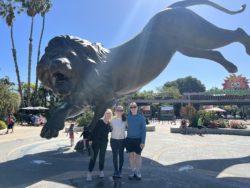 As all the printed tote bags in the gift shops proclaimed, “World Famous”, is correct.  This zoo was the largest and most well built I have ever seen.  Tickets were around $65 a person and it was very crowded but I would say it was still totally worth checking out.

We started by visiting the snake house.  Allie isn’t a huge fan of them, but, since we know we will be seeing them in the PCT, we wanted to check them out behind glass first.  We saw a bunch of awesome snakes and turtles!  I wish they had more local snakes but it was still cool seeing all of the rare ones from far away places. 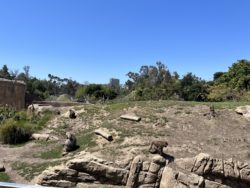 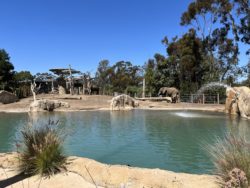 In no particular order, other highlights of the zoo include:

The Andes Bear – we some him break open a bone and eat the marrow!

The female lion – we saw her licking a giant bone

The Baboons – a lot of red butts 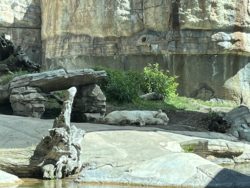 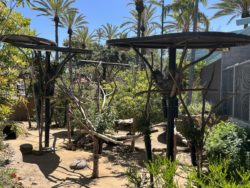 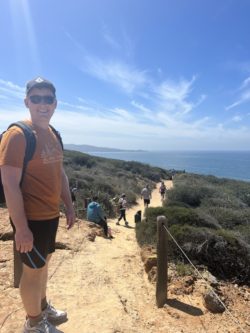 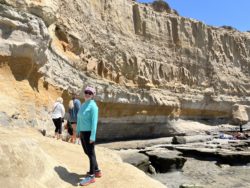 This was an amazing hike.  We paid the $20 fee to park and the drove up the road over the cliffs with beautiful views of the Pacific Ocean.  My first time ever seeing it!  I grew up going to the Atlantic Ocean every summer in Ocean City Maryland and seeing the cliffs of Torrey pines state park over the crashing blue waves of the pacific was breathtaking.  We did a 2ish mile hike from the visitor center to Razer point on the Razor point trail to Yucca point and then down the beach trail to the beach.  After that, we continued up the beach trail to the North Fork trail and then finished our hike along a closed road back to the visitor center.

We were fortunate to have Allie’s mom and step dad Jill and David join us for the hike and for combining their vacation with our hike and driving us around in their rental car plus exploring San Diego with us before the start of our hike.  They are very generous people and we are very fortunate to be so supported by all of our family members.  I am so thankful for all of the help we have received to get to the start of the trail.

The hike to the cliffs was definitely worth checking out.  Our 4ish mile walk through the zoo yesterday plus today has been really fun.  I wanted to take advantage of flying to San Diego and explore it and I feel like we are doing that!  On the hike I was most impressed by the cliffs, by the water near the cliffs and by the plant life.  It is so awesome to be in such a different ecosystem than back home near Washington DC.  The park was impeccably maintained and besides parking being super difficult to find, this was a must visit spot. 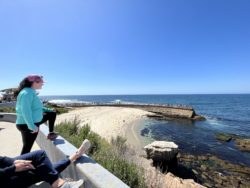 La Jolla was super cool.  We had a nice lunch at the Brick and Belle Cafe where I got a half sandwich half salad that was very delicious with large portions.  Then we walked around a bit and saw the seals in the bay.  That was really wild.  There was a bridge thing we could walk on to see them up close and it was incredible.  They flopped and scooted their way from the water to prime sun spots on the rocks near the beach.  We weren’t in La Jolla long but it was definitely worth visiting for lunch, to walk around shops and to see the seals.

Allie and I did a tour of the North harbor of San Diego Bay on Flagship cruises.  There is something special and unique about seeing a city from the water.  The cruise was nice, wasn’t too crowded and it lasted an hour.  I never realized how large of a presence the military had in San Diego.  We got to see a submarine, airplanes, helicopters and a bunch of ships as we motored around the bay.  We also saw sea lions sleeping on a barge that fishermen had somehow stocked with fish underneath.

The military hardware and sea animals were neat but the main attraction was the skyline.  We had beautiful views of some extremely expensive homes over looking the bay and of the hotels and skyscrapers.  It was cloudy when we set off but the sun came out and we had an awesome time.

We met Buck and Robin at a Padres games at Petco stadium!  We bought the tickets online day of and they were about $30 each to sit up high, but we still had a great view of the game.  It has been a long time since I’ve been to a stadium.  Pre-pandemic I should say.  In many ways, this trip has felt like a breath of pre-pandemic fresh air.  I’ve really missed traveling and hanging out with friends and family.  We had been doing some during the pandemic but nothing this grand and it feels so good to be on the cusp of such an adventure.

Seeing Buck and Robin for the first time in 4 years was wild and epic.  After some intense hugs and an introduction to Allie, we did some quick catching up and then settled in to watch the game.  Unfortunately, the Padres had a rough game, but we still had fun.

Another highlight of San Diego was visiting old town.  There were a ton of awesome shops and it felt like we were somewhere in Mexico.  There was a long wait for the restaurant Case de Reyes but it was totally worth it.  Some of the best Mexican food I’ve ever had.  Allie, Buck, Robin and I all shared a giant margarita, plus there was live music!

Hi, Connor and Allie here. We are hiking the Pacific Crest Trail this year (2022) going Northbound! Connor was known as "Squidkid" for the beginning of his AT thru but now goes by "Brand New". He is an Eagle Scout and first got into backpacking through the Boy Scouts. Connor loves eating lunch by water sources, listening to audiobooks and going uphill. Allie is a first time thru hiker who found her love for backpacking once she met Connor in 2019. We are engaged and are getting married in the blue ridge mountains (where we fell in love) in 2023. We live in Arlington Virginia but may be moving after the trail.