Deep in the Third 500, and the Trail Has a New Feel

A 2,000-meter rowing race is broken into four quarters, each 500 meters in length. The first 500 meters are sharp and quick. From a dead stop, the rowing shell levitates higher above the water with each stroke until a base rhythm has been found. Moving into the second 500 of the race, the adrenaline of the start has worn off. The field is still close together and each crew is throwing down moves to take a decisive lead by the halfway point. As the third 500 begins, the realization that the race is only halfway through kicks in. This part of the race is won through mental toughness, fitness, and pure grit. Once the last 500 meters hits, each rower is deep in the pain cave, but the coxswains are demanding more. Knowing that there are only 90 seconds left in the race, each crew increases their rate of striking to see who can make it across the finish first.

Now, how does the Pacific Crest Trail fit in with rowing? Well, it’s the longest “race” I’ve been a part of. (Note: I don’t view the PCT as a race to Canada.) As a longtime coxswain, the sport of rowing is ingrained in my brain. On trail, I will spend hours on end reliving my glory days through audio recordings of some of my favorite races. Whenever I think of the distance I have traveled, I can’t help but think about where I would be in a 2k.

At this point on trail, I am deep in the third 500. Fatigue is setting in and my body and gear are slowly breaking down. Back-to-back 30-mile days and quick resupply stops in town have made little time for rest and recovery. Despite aching muscles, I feel stronger than I ever have in my life. This rough and tumble lifestyle takes a toll on gear, too. My clothes are faded from the sun and my shirt is growing an impressive hole in the sleeve. The shoes I am hiking in have nearly 1,000 miles on them and look like they may fall apart if you stare at them for too long. Each pair of socks I own has at least one hole and can stand up on their own because of dusty trails and sweaty feet. 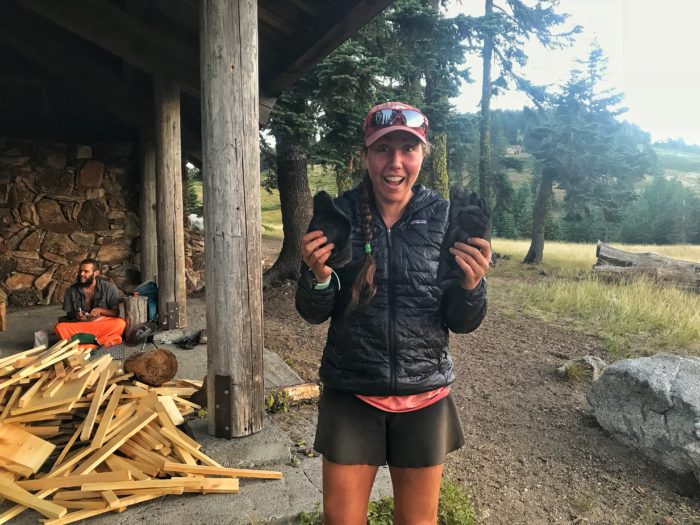 Luckily, these things can be replaced. I ordered a new shirt in an attempt to replace the old one, but I only lasted ten minutes on trail before switching to my old, raggedy shirt. It sounds silly that I wouldn’t want to hike in a brand new sun hoodie, but my old shirt has become a part of me. Despite the growing hole and the stains, this rag of a shirt is going to Canada. Shoes and socks, on the other hand, are a little easier to part with, especially with the rate at which my feet are growing. My new pair of shoes is a size 11!

When I think of the wear and tear my body and gear have gone through in this section, I can’t help but feel amazed at how far I have come on my own two feet. The hypothetical first 500 of the PCT were spent building momentum and finding my stride on trail. Back in those days, I would wonder if I would make it this far as I hobbled through the desert on blistered feet. As I reflect on my time in the desert, I think about how much I learned, both about long-distance backpacking and about myself. Some of the learning has stuck with me to this point. Being patient with myself and the phrase “less is more” are constant reminders of the desert.

By the end of the first 500 of the PCT, I dropped several pounds from the base weight of my pack and was hiking upward of 30 miles a day. I physically transformed from a pudgy, retired coxswain to a lean, mean, hiking machine, but I continued to struggle to find patience with myself. Despite feet covered in blisters and a strained quad, I refused to listen to my body and slow down. I was determined to get out of the desert and into the Sierra as soon as possible, no matter the toll on my body.

As I stumbled to the end of the first 500 meters, I worried if I went out to hard. Once I made it through the desert, I vowed to myself that I would slow down. The second 500 meters were a great test of my patience as my pace slowed to a crawl. I mean, how could you not when you’re surrounded by the Sierra? These days involved long breaks and lazy mornings, while searching for an alpine lake to swim in. My time spent in town was luxurious, especially for a dirtbag hiker. I slept in beds, binge-watched Netflix shows, visited all-you-can-eat buffets, went to the movies, and laid on the beach. This overcompensation for my lack of rest in the desert resulted in nine zero days, five of those spent in South Lake Tahoe.

As the miles slowly passed, I realized this slow-paced trail lifestyle could not last if I wanted to make it to Canada. With the halfway point quickly approaching, I took the pledge to the grind and blasted through Northern California and into the third 500 of the PCT.

So far, the third 500 has been a blur. After reconnecting with several hikers from the first 300 miles, we fed off each other’s drive to get to Oregon. This all started soon after leaving South Lake Tahoe, when we got word that a free, 40-ounce bottle of King Cobra was offered to each hiker that passed through. Knowing that a hot meal and cold adult beverage awaited us, we outran the sun to Donner Ski Ranch.

The evening wore on and by the time we were ready to leave it was nearly 11 p.m. Our options were to hike a quarter mile back to the trail or stealthily sleep at the ranch. The trail seemed way too far, so we rolled out our sleeping bags underneath the chairlift. We awoke the following morning to several lift mechanics working on a nearby chairlift. Disheveled by our strange surroundings, we packed up and left, with the mechanics laughing to themselves. Clearly we weren’t the first hikers to sleep there. 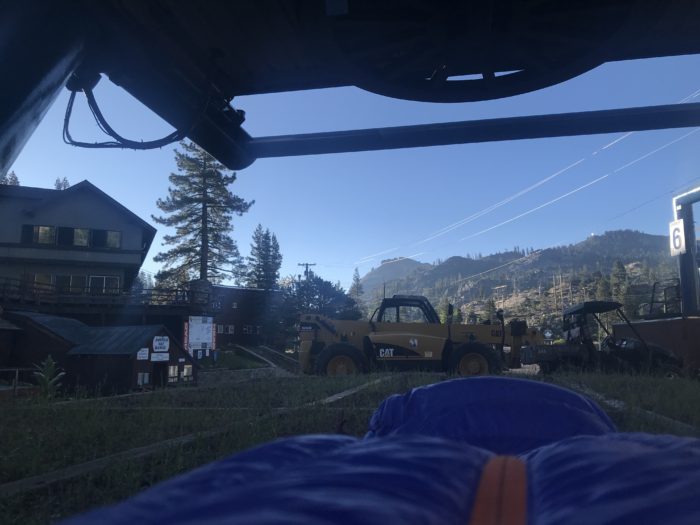 The miles in Northern California came much easier than those in the Sierra, but transitioning from a saunter to walking with a purpose took some time. I struggled to remain patient, but soon I found my stride.

Most town stops were spent resupplying quickly and getting back to the trail. Chester, however, was a different story when I tried to eat a 32-ounce milkshake in one sitting. I was so deep in a food coma, I could hardly navigate my way back to the hiker campground in town.

Burney was a similar story. We planned to spend the night and leave in the morning, but more and more people we knew kept rolling in and the pool at the ranch was so inviting. By 4:30, a horde of us had our packs on and were finally hiking out. Half a mile later, the smell of smoke was overwhelming. Soon after a huge plume of smoke made it obvious that a fire had broken out. After only a mile and a half, we were at the highway hitching into town. 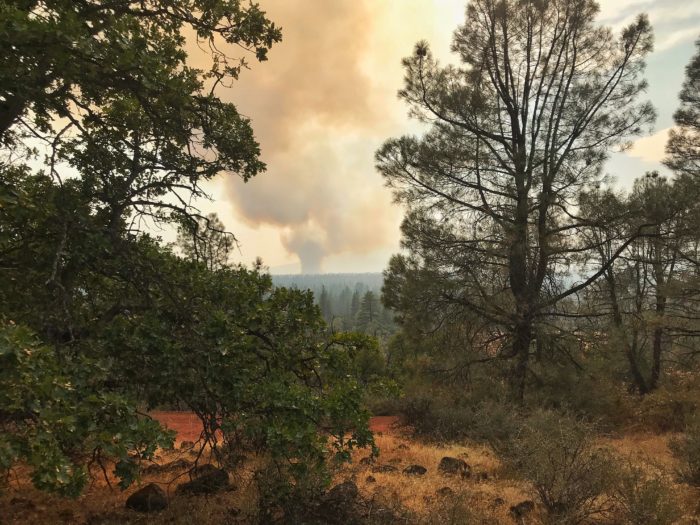 This day happened to be my birthday as well. Once we made it into town safely, we convened at the local bowling alley. Who knew hikers were so bad at bowling—the highest score was only in the 80s.

By morning, the fire was contained and the trail remained open. This, however, was the start of the smoke that would remain in NorCal. Disappointed by the lacking views of the Trinity Alps, it was pedal to the metal in hopes of finding clean air in Oregon.

In my final days in California, I spent a lot of time reflecting on the last three months. The culture of the Pacific Crest Trail is so much more than walking from Mexico to Canada. The people along the way are the ones that keep you going in times of hardship and the wild scenery never disappoints.

In PCT miles, the state of California is 1,691 miles in length. Although this state felt as though it would never end, I developed a great appreciation for the wilderness this state has to offer. My last morning in California began with clear skies. This was the first time I had seen blue sky in weeks. Energized by the good weather, I moved swiftly though the last 12 miles of California.

One of my fellow hikers, by the name of Young Beard, was the first in our group to arrive at the Oregon border. When he saw me round the corner, he started cheering me on. I broke out into a run with tears streaming down my face as I went to embrace the tree marking the state line. After 91 days, I was out of California and back home in the Pacific Northwest.

The dropout rate of hikers at the California border is outrageously high. Walking across this massive state is a huge feat, but I feel energized to walk through the two remaining states. I’m ready to put in some big mileage in Oregon and cruise through Washington. It feels like the trail is just starting again as I approach the last 500.