This Is The End, Part Two

No, I didn’t lose my mind on the PCT. However, boredom was a constant problem, and I did sometimes struggle to create a distraction. Making up stories (for example, befriending a balloon) helped pass the time during the more mundane sections. During the final few days, I also spent a lot of time thinking about the fact that I would soon run out of trail. I wanted the experience to last longer, but I was also ready to be done. Time seemed to simultaneously speed up and slow down.

Leaving camp to begin my last full day on trail, I noticed just how dark the mornings had become. I crossed beneath the I-8 and stopped at the Boulder Oaks Campground to collect water for the last time. I began my society-reintegration process by chatting with some friendly locals outside Lake Morena Village. Then I stopped at the Oak Shores Malt Shop for a late breakfast, except it wasn’t actually that late. I’d forgotten that the clocks had gone back three days earlier. Great. In no way would that help my impending post-trail jetlag. I camped within sight of the border wall, and watched the light fade for the last time. As I sat there, I was bitten twice by red ants. There were some aspects of the trail I would not miss.

I arrived at the terminus before ten a.m. Dammit. Sorry – nine a.m. No fanfare, no cheering crowds, not even a passing tumbleweed. Just a bunch of mixed feelings and a cold wind kicking up plenty of dust. I checked the logbook, saw that Hawaii, Toes, and Pancake had made it safely, and thought about adding my own comments. But words failed me, and I placed the book back in its slot. 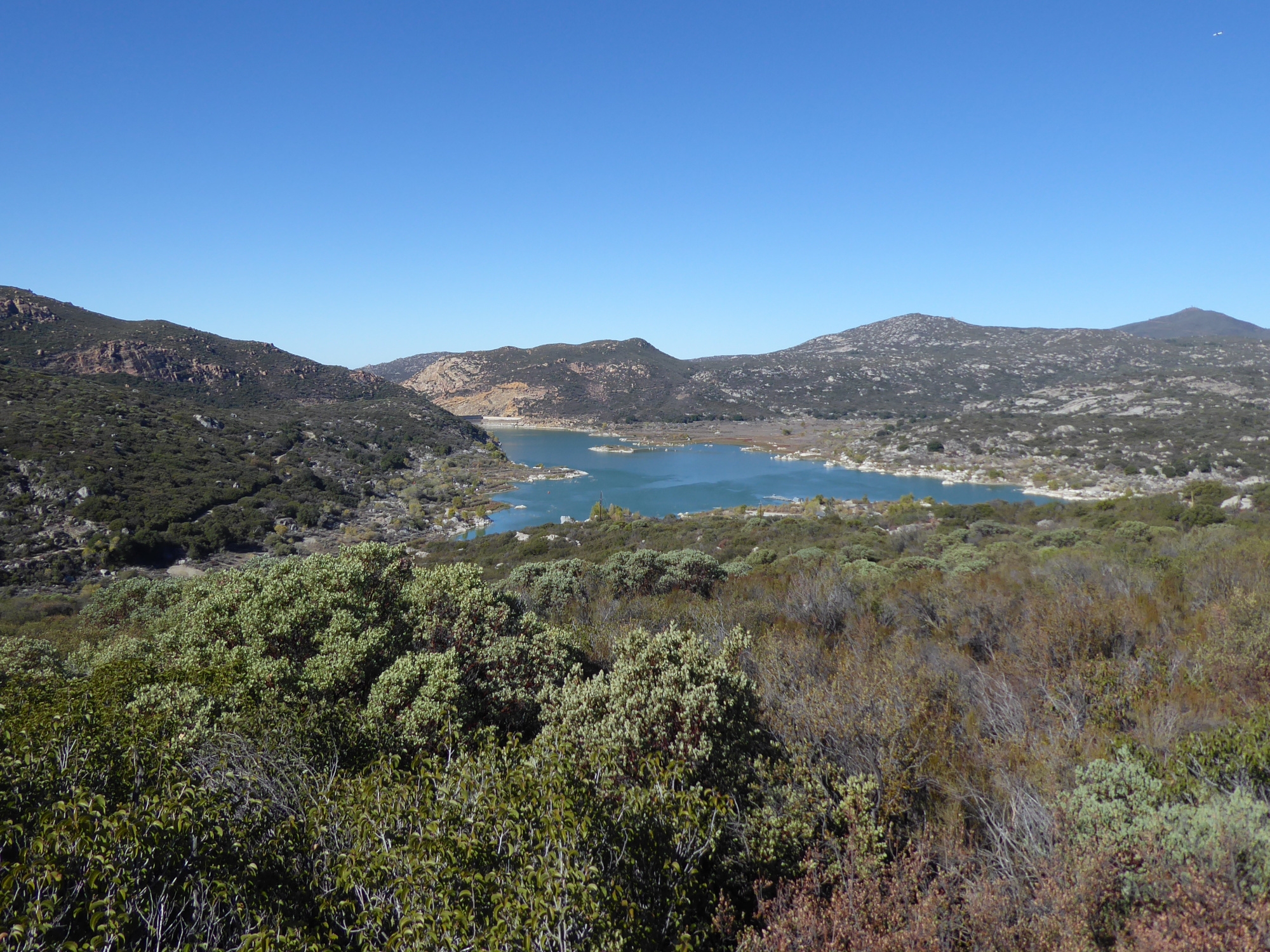 At the Campo Store, I bought an ice cream and a cold soda, then sat down at the picnic table across the street. When the 10:57 to El Cajon arrived, it had no other passengers, but at least the driver was friendly. The bus filled up a few stops later when we reached the border town of Tecate. Just a few empty seats remained, including the one next to me, for some reason. Continuing along Highway 94 towards San Diego, the bus began to slow down, and I noticed everyone reaching for their I.D. We came to a halt at a checkpoint, the doors opened, and two heavily armored border patrol agents entered. I hastily located my wallet.

In the years before I became a U.S. citizen, I was stopped by border patrol agents in three different states. To say I was detained would be overstating it, but on each occasion, I was told to park my car and wait until given clearance to leave. Each time, I wasn’t carrying my passport. The border patrol would take my driver’s license and check to make sure I was in the country legally. I was never delayed more than 45 minutes, but it was still inconvenient.

Sitting on the 894 bus, I didn’t have my passport with me, and the next bus wouldn’t arrive for four hours. Also, I still didn’t sound like a U.S. citizen, and I stuck out like a sore thumb. A white guy with a dirty, sweat-streaked, bandana-covered face, who nobody wanted to sit near. One of the agents made a beeline for me, and I offered him my license. He gestured for me to lower my face-covering, and I complied.

He looked at my license, then back at me. “Idaho, huh?”

He paused just long enough that I thought a follow-up question was coming. Then he handed my license back and moved on to the next person. 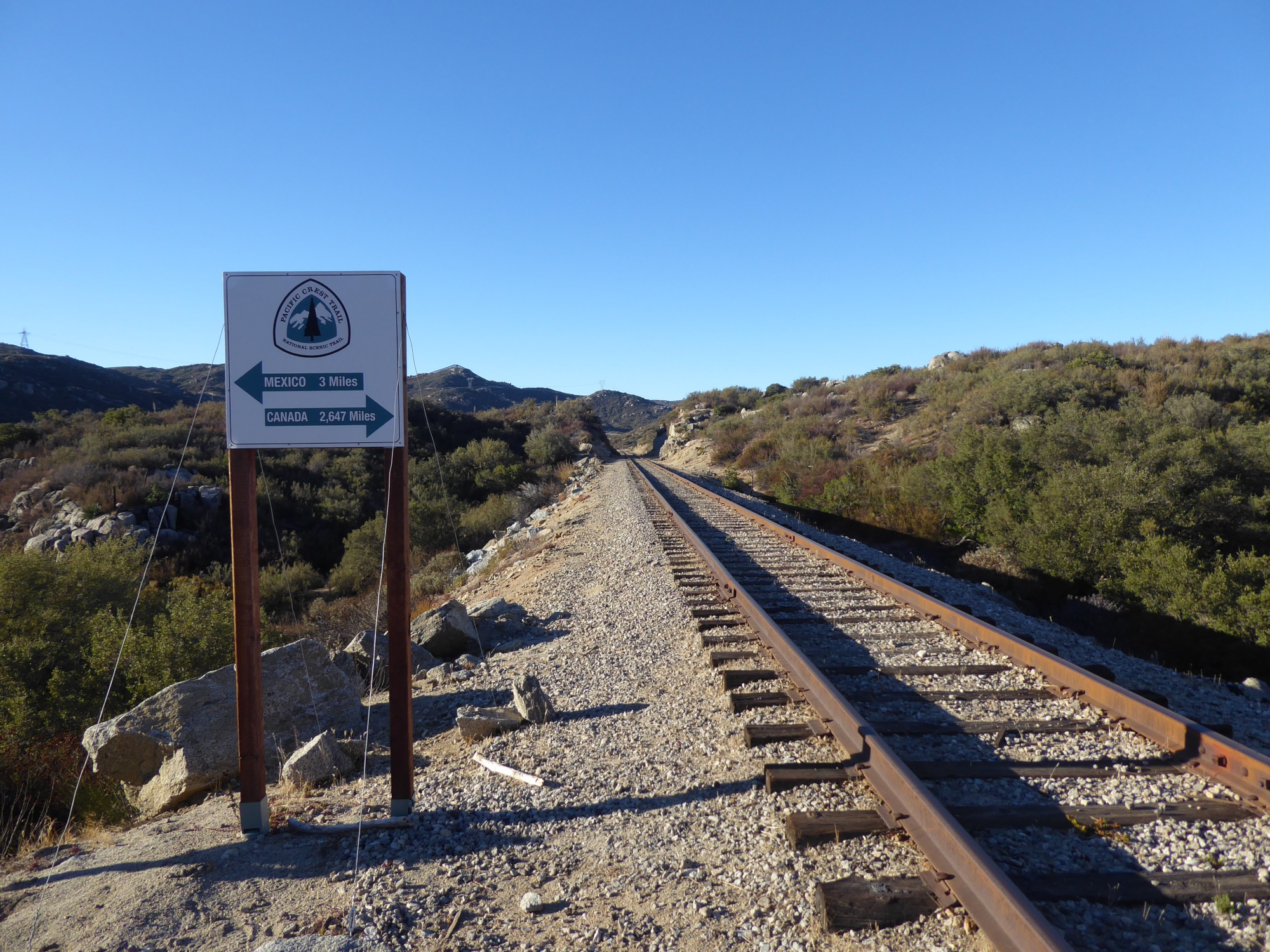 I got off the bus one stop before the end of the route, at El Cajon Transit Center. It’s a short walk over to the trolley station, which is where I intended to take the Orange Line downtown. I bought a ticket at the machine on the platform, and while waiting for the train, I browsed hotel options for that night. The one that caught my eye was a fancy, four-star, waterfront hotel that for all its apparent luxury, was reasonably priced. It was a last-minute bargain, and I felt like treating myself, so I booked it. Also, as dirty as I was, they wouldn’t be able to turn me away if I had a reservation.

A ticket inspector walked onto the platform and started working his way in my direction. He moved from one person to the next in an automatic, absent-minded manner. He’d obviously done this a thousand times. With his head down, he plucked the ticket from each outstretched hand and scanned it before handing it back. He remained oblivious to each customer, transfixed by the details on their little piece of paper. As he finished with the guy next to me, I held out my ticket.

I’m willing to bet that I didn’t smell very good. That might have been what interrupted his flow. Maybe it was my grimy fingernails and mucky hands. Perhaps it was my dirty arms and disgusting t-shirt. Something broke him out of his work-induced trance, and he looked up for the first time in a long time.

Clearly taken aback by the filth and proximity of the mess in front of him, he uttered a single, simple, involuntary word.

Stepping off the trolley in San Diego, I walked east, taking a mental note of the overwhelming ratio of homeless people to office workers. A scene in which I didn’t look at all out of place. I saw a notice reminding me it was Veterans Day, but fortunately, a nearby cheap-clothing store was open. It didn’t take me long to find a t-shirt and jeans, which I planned to change into after taking a shower. Then I walked back along C Street, heading in the direction of my hotel. Along the way, I passed a bar with outdoor seating, a good selection of beers, and an irresistible menu. Time for a very late lunch.

With the sun nearing the horizon, I walked the remaining five blocks to my hotel. Passing a pair of expensive sports cars parked in front of the lobby, I put on my face covering and walked through the sliding doors. The interior lighting was subdued, which if I was lucky, might just mask the worst of my appearance.

A young couple, obviously returning from the pool, flip-flopped their way across the tiled floor. I slowed down to allow them to cross my path at least six feet in front of me. I was less concerned about the delta variant than by the fact I hadn’t showered since Idyllwild. The last time I’d even washed my hands properly was at the Paradise Café, more than a week ago. As I approached the check-in desk, I kept my distance from a group of men in suits. They might have been talking big business, but it wasn’t too important to prevent two of them from staring at me.

Behind the desk, the tall man with the gold nametag beckoned me forward. I told him I had a reservation, and at arm’s length, pushed my I.D. and credit card across the counter. This hotel manager obviously had some reservations of his own, but he kept them to himself. He was polite and professional, but curt rather than friendly. Definitely a frosty welcome compared to the Silver Pines Lodge in Idyllwild. He ran my credit card and studied the on-screen details intently. A moment later, with the transaction confirmed, his stress level dropped visibly. 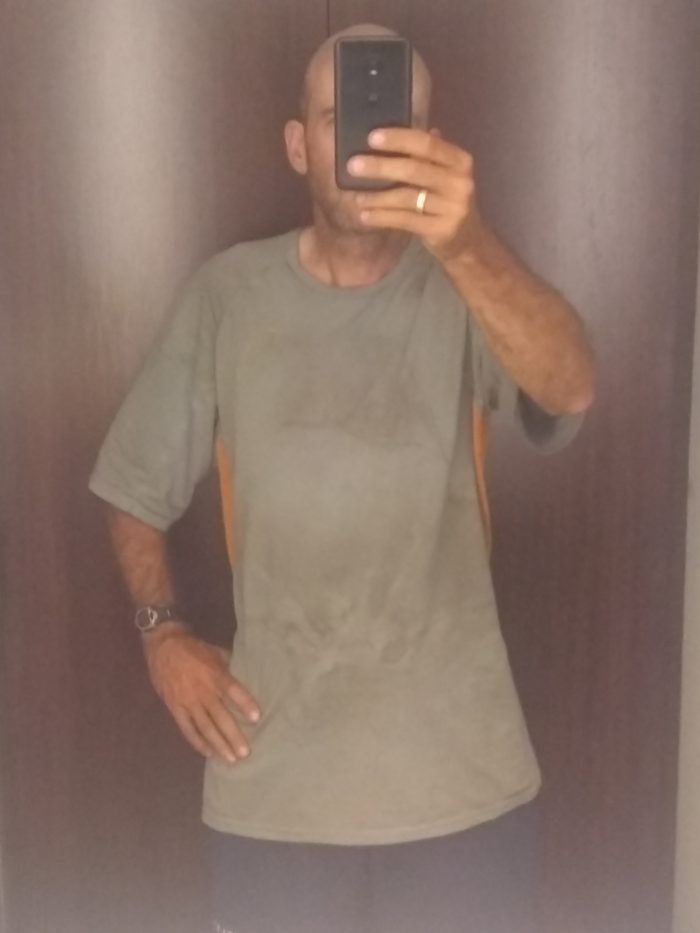 Post-trail, pre-shower. A picture’s worth a thousand smells.

I checked out of the hotel next morning, picked up my rental car, and consulted my list of places to visit. It contained some tourist hot-spots, but mostly it was just locations I had fond memories of. (More than 10 years ago, I lived about 15 miles north of downtown.) I’d compiled the list during my final week on trail, and it had given me something to look forward to.

Later that day, it occurred to me that I might have built my expectations too high. Or maybe my post-trail slump had already started. Whatever the reason, my memories of each once-familiar location felt like they belonged to someone else. I concluded that I’m just not as good at reminiscing as I used to be.

The following day, I heard from Bunkhouse and Spud. They’d reached the terminus that morning, and we arranged a time and place to meet. After I picked them up, we drove over the Coronado Bridge to go for dinner at a hotel I hadn’t yet checked off my list. We watched the sunset and continued strolling along the beach towards the Hotel del Coronado. This location felt different from the others, and I came to a new conclusion. Rather than trying to recapture a past moment, I should make the most of the present.