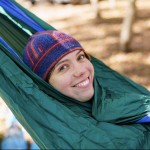 Through the Fire and Flames: The McKinney Fire Part One

Author’s note: This event turned out to be an enormous roadblock in my blogging. After this experience, I needed a lot of time to reflect on my feelings. I’ve done my best to recount the day as accurately as I can. The story is much too long for one post, so I’m breaking it up. With these posts complete, you can expect the rest of my PCT blogs in the coming weeks. 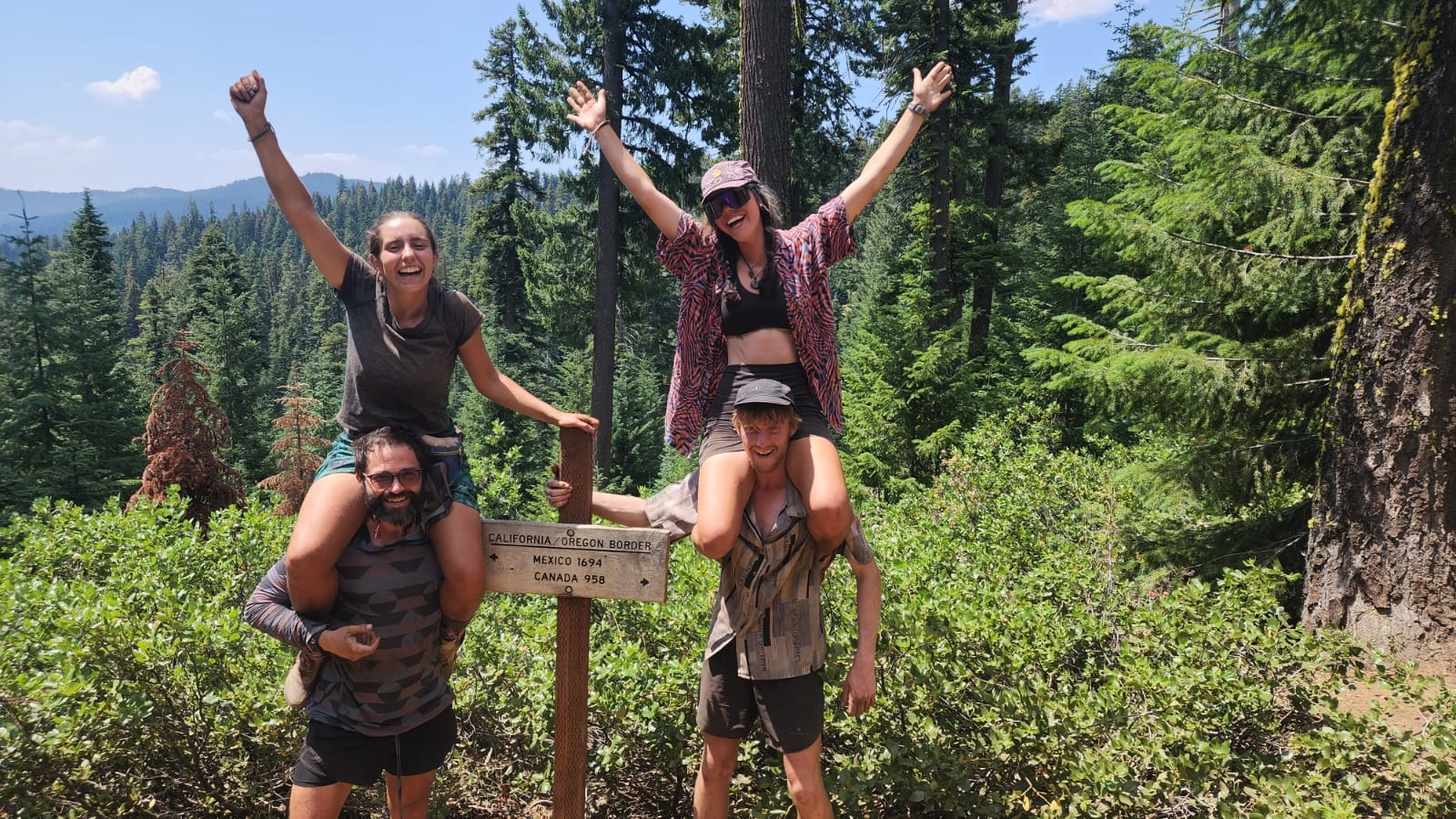 Pure joy from our crew at the California-Oregon border.

I made it to Oregon. The culmination of 3 months of hiking. The reward, the gratification, the payment for ninety-nine days of walking through dry-as-a-bone desert, alpine desolation, forested valleys, and most recently, weeks of 100+ degree days, was mine. All mine.

For a few hours. 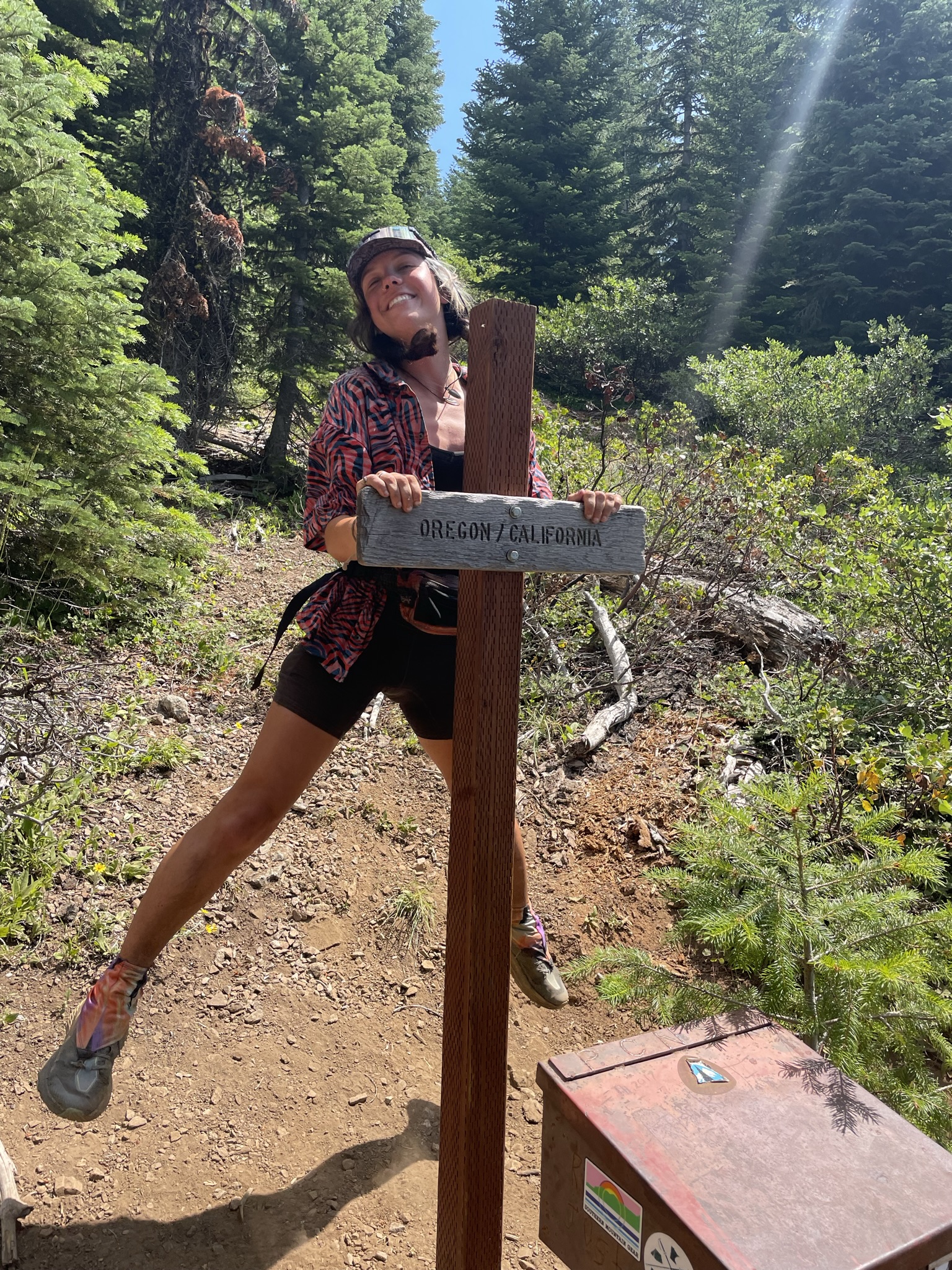 From the California-Oregon border, we still had about 16 and a half miles to hike that day. We planned to camp inside one of the extremely rare shelters that night, then cruise on down to Ashland in the morning for an eleven-mile nearo.

About three miles before camp, at the top of a ridge as the sun set, we stopped to enjoy some trail magic in the form of a couple of coolers stocked full of soda. The sunset was unusually dramatic and the horizon was hazier than I was used to. Opposite the sunset, there was a bizarre smear across the sky. Thunder rolled from that direction. “A storm is rolling in,” I said. “We need to boogie down to this shelter quickly so we don’t get caught in it.” 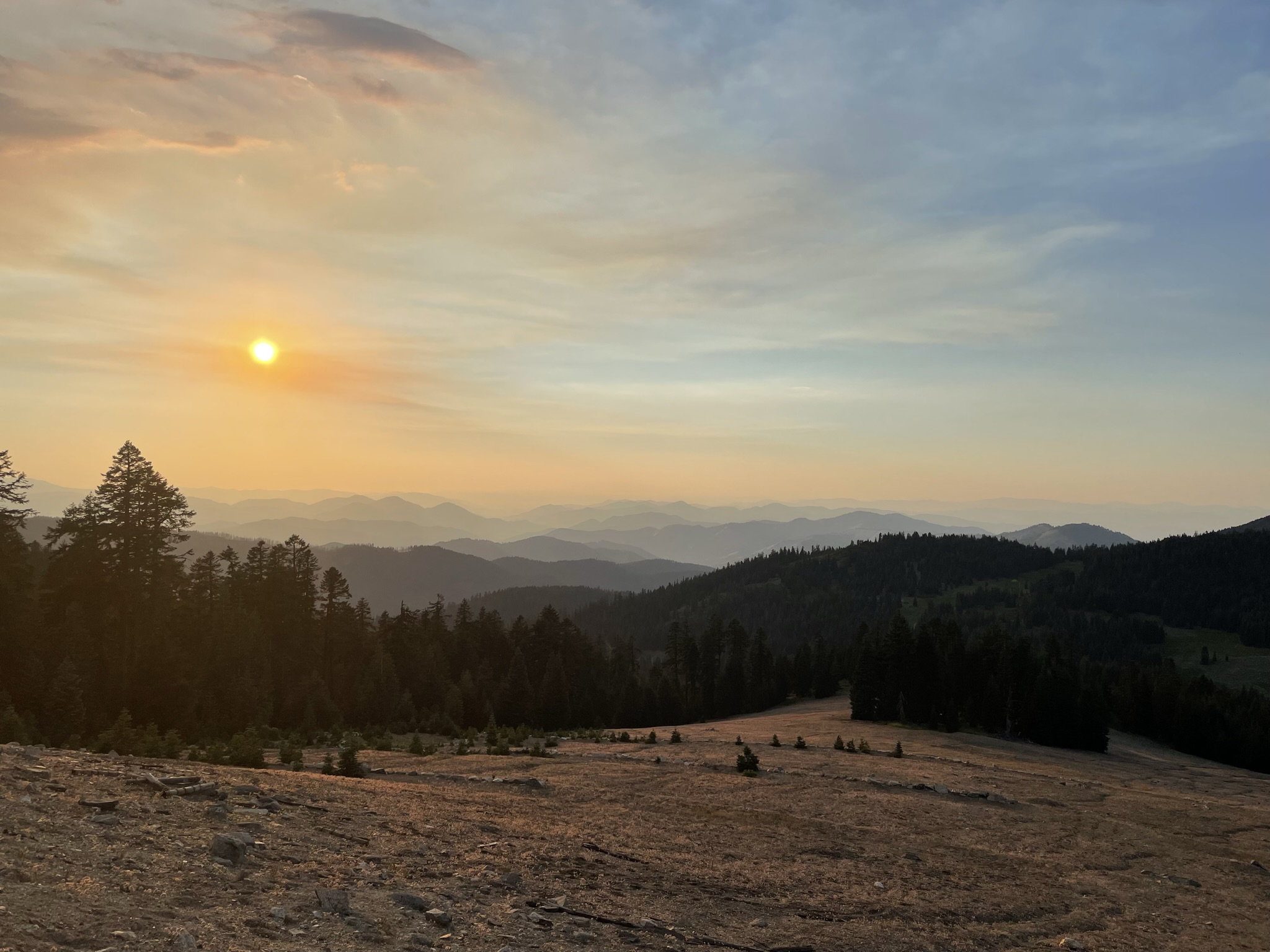 The beautiful sunset that day. Caused by smoke, unbeknownst to me!

I was partly correct – a storm was coming, but it was not the kind I’m used to.

The Calm Before the Storm

We made it to the shelter, a two-walled structure with a fireplace in the center, just after dark. A couple of other hikers were already there. We went through our well-polished nighttime routines to the sound of thunder just over the ridge. Throw down the groundsheet, blow up the sleeping pad, fluff up the quilt, and crash.

After a few minutes, we heard the unmistakable crunch of tires on gravel and saw headlights illuminate the parking area nearby. A discussion took place between a hiker in his tent and the driver. I overheard the word every PCT hiker dreads: fire.

I kicked off my quilt and ran to the car barefoot to hear the full story. I looked into the face of a wide-eyed twenty-something behind the wheel of a Jeep, haphazardly packed to the brim with camping gear. His friends remained silent. He said, “we were car camping on the forest, a few miles from here up on the ridge, and saw a fire across the valley on the next ridge over. We had service, so we called the sheriff’s office. They told us it’s three miles away and it’s jumped the river.” 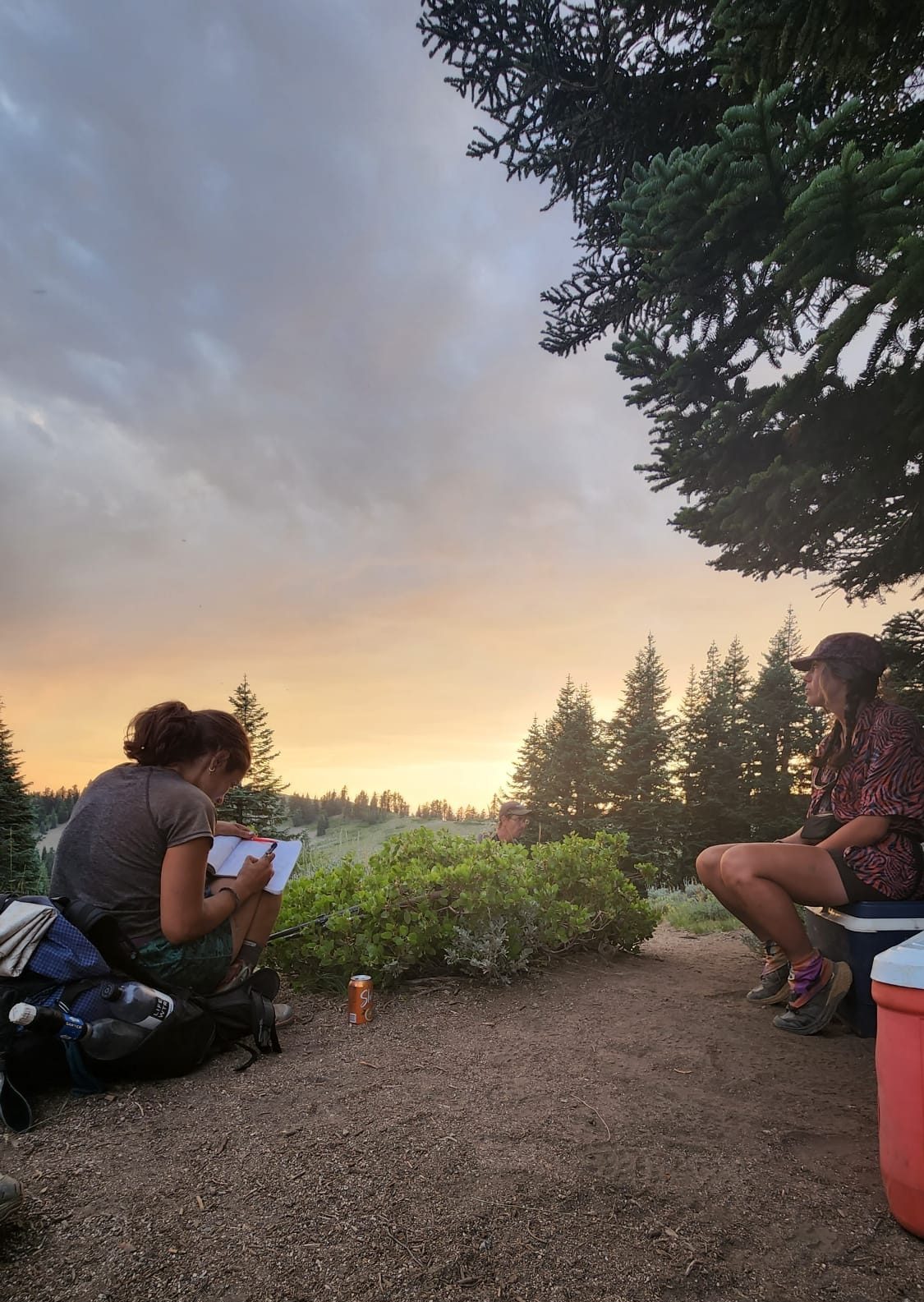 Booster and me at the cooler trail magic.

Immediately, I asked if they had room for us in their car. I could see there wasn’t much, but they were willing to squeeze us in and drive us to safety to Ashland. I thanked them profusely and ran back to tell the others in the shelter. At this point, Booster and Veto got up and spoke to the driver themselves. In a panic, I broke down my sleep system and threw it in my pack. I was on the verge of a full-blown panic attack. “3 miles away,” ran through my mind on a loop. As a forester, I have a somewhat better grasp on fire danger and behavior than most other hikers I’ve met. I knew that fires, under the right circumstances, can move faster than a freight train. I had to get out of there.

I kept repeating, “I’m leaving. I’m getting the fuck out of here.” Retune, bless his heart, took this to mean I would hike the remaining eleven miles to Interstate 5 that night. When I clarified I was taking the ride, he pushed back. “They’re probably going to close the trail if the fire is this close. If we don’t hike it now, we may not be able to, ever. At least not this year,” he said. Veto and Booster agreed. They seemed significantly calmer than I felt. We talked about it more and consulted our maps. The eleven miles to the Interstate were completely downhill. The trail ran parallel to a road the whole way. Hiking out, under these conditions, began to seem like a safe enough option, all things considered. 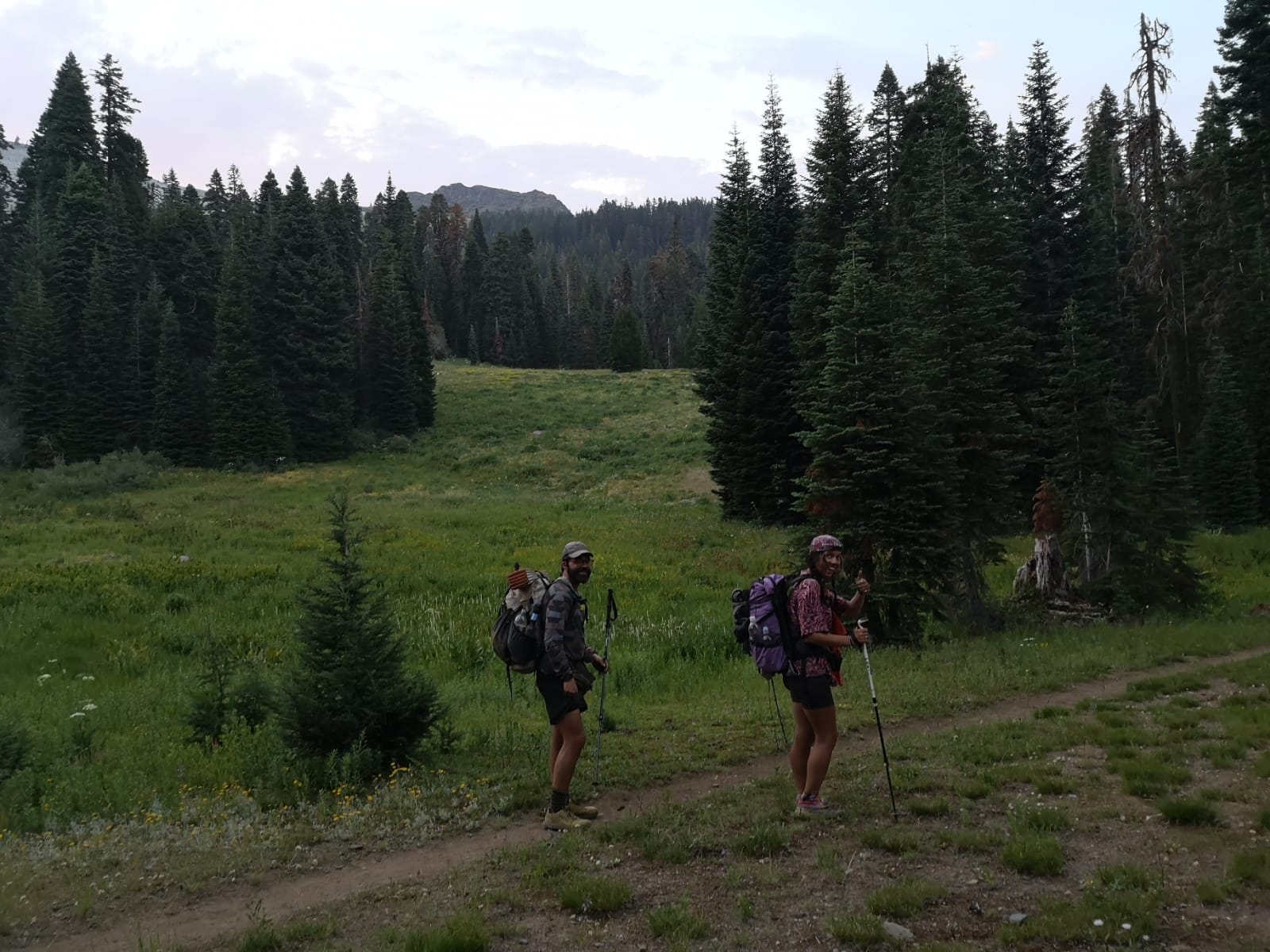 Dusk hiking to the shelter.

A Plan Is Formed

As we deliberated, a practical convoy of cars from campers fleeing the forest started up. They were driving down the road that paralleled the trail. It became clear that if things got really hairy, we could probably flag someone down to deliver us to safety. I reluctantly agreed to hike out with my friends, if only so I wouldn’t have to figure out sleeping arrangements in Ashland in the middle of the night alone.

I went back to the Jeep and thanked them for the offer, but told them we decided against the ride and would be hiking out. They looked at us with the most incredulity I had ever witnessed. “You’re going to WALK out?” they exclaimed. We explained our reasoning. They remained unconvinced, but nonetheless wished us luck and went on their way.

We were on our own.