A Merging of Tramilies at Trail Days

I didn’t think crossing the Bridge of the Gods would have as big of an impact as it did. It’s just another part of the trail, right? Nope. Crossing the bridge was like taking a portal to another part of the world. Wind gusted around me, making the whole hiking dress thing a little more exposing than I was comfortable with, but the view (of the river, you goof) was incredible. It peaked in white caps beneath our feet, and calmed as it reached the bay. Everyone driving by gave us plenty of room, smiling at the astonished looks on our faces. Then, we were across and headed to a special island set aside just for us (hikers, not just me and PB) for Trail Days. 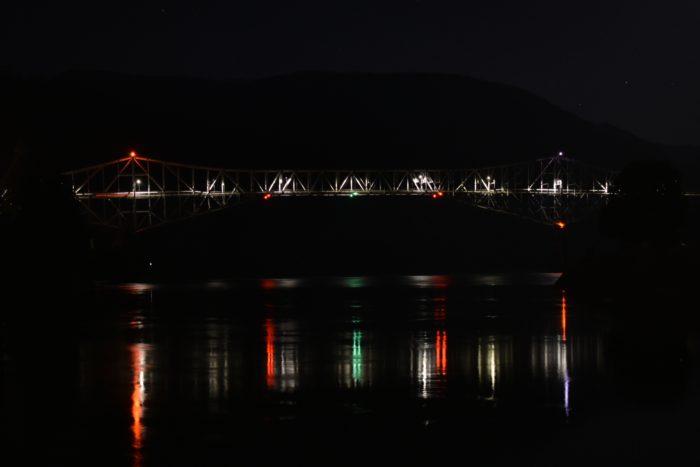 PB and I were really excited to go to Trail Days to be reunited with the incredible SOBOs we’ve met so far, and to meet the badass NOBOs who had to fight to get through the fires in California. Many of them have been wearing respirators to avoid lung damage with all of the smoke in the air. But I was also back to being a filthy trail animal. I wasn’t sure if I knew how to act in public anymore. Did everyone talk about poop and weird things their feet were doing, or was that just hikers? Or just me? I was pretty sure it was hikers.

A huge crowd of wonderfully grungy and bearded individuals was waiting to greet us when we arrived in Cascade Locks. For some reason, they were mostly in Hawaiian shirts, with one guy wearing a pink panther suit. Is that a NOBO thing? If so, I love it.One hiker waxed his mustache to the point where it could hit someone if they bumped shoulders. Gear representatives were out helping injured hikers, swapping out gear with no questions asked. It was overwhelming in the best possible way: like walking into a family reunion, but one without any feuds. Everyone was extremely kind and had stories to share (there were a lot about poop, feet, and strange body hair). And the best part? Even though all the NOBOs were exhausted from their journeys thus far, they were all smiles.

We set up camp on our little island (an island of SOBOs on an actual island). Friends! The next day was filled with magic. The trail angels pulled up in their RVs just to give us coffee and pancakes. PCT Granny even had four charging strips set up so everyone could charge their battery packs. We ate our fill, thanked them profusely, and wandered around in semi-comas due to overstuffing. Despite the food, we were hungry again in an hour, so we took on the hiker burger challenge. The hiker burger is two burger patties, with all the dressings, placed between two personal pizzas. No one, not even the NOBOs, was able to finish it in one sitting. After the festivities, we spent the evening playing silly word games like, “this is the food for the cat,” and falling over in convulsions of laughter.

On the second day, PB and I entered a race for a dual sleeping bag and lost by a hair. Technically, we both crossed the finish line first, but one of the other partnered racers crossed just ahead of us. So close! It was very dramatic because another team ripped one of the down bags, creating a huge cloud of feathers. Everyone froze and looked on in horror, but the company reps were really nice about it and replaced the racing bag without a moment’s delay. Later on, I won a sun shirt in a rain jacket toss, which cheered me up considerably and made up for the loss of the bag. After two days of goofing off, it was time to head on to Oregon. 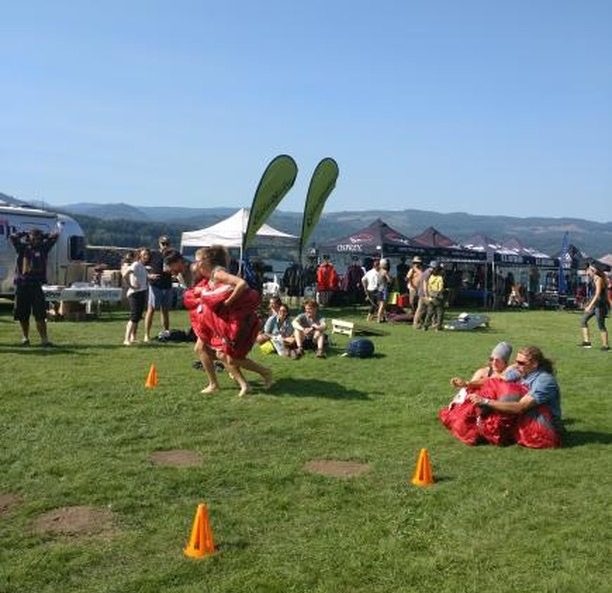