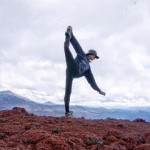 “Oh shit. I mean shoot. I mean. I don’t know babes. Oh gosh I do not know if I can do this. Like psychically do this.”

It was 4:30 a.m. and I was standing fully geared up in our small condo’s living space. Our condo was only 650 square feet in total and as I staggered to stand, hoisting the turquoise backpack to my person, I felt like I filled every last foot available. I held back tears. The backpack felt way too heavy. Inside the contents ranged from ramen noodle packets to a blowup sleeping bag pad. I was layered with three pants and four long-sleeve shirts, as well as gloves, two pairs of socks, and a furry hat I coined my Moscow hat. I had these lofty ideals of our first-ever thru-hiking adventure where we would walk our way across the two islands of Catalina Island. I had spent months calling ranger stations, renting back packing gear since we owned not even a tent, and studying maps. Now I watched my ideals crack from strain as I stood in our living room at 4:30 a.m., ready to give up before we even stepped out our front door. Three sets of eyes stared up at me. They all held the same sleepy, glazed-over look of wonder at me as my words in a painfully slow way. I could almost see the words begin to penetrate the early morning mind fog inside their skulls. The tall one was the bravest of our clan as he began to question what I was declaring to them. He was highly aware that my anxiety bubble was about to burst. His voice was a heavy, weary understanding of how his words could act like a pin to completely implode me as shrapnel would send daggers in all directions to all there to witness it. I know you can do this. We will do this together. And with those quiet words mixed with heavy eyelids, I took one last look at our minimalist living space and marched out the front door into the dark, crisp morning.

The walk from our beachfront condo to the Catalina Express shuttle port was a 15 minute one along the practically named road Ocean Boulevard. Upon crossing the quietly street light-lit Ocean Boulevard, the sounds of metal scraping sirens erupted around us. My mother bear instincts pushed both the children behind me as a car sped pass us followed by a train of police cars; one, two, three, four going fast. It was a high-speed pursuit occurring right in front of us. I looked in worry to the tall one. This was an interesting way to begin our trip to say the least. This ominous beginning certainly was not helping my meltdown just moments before in our living room. The tall one shrugged in his lanky, puppy dog cute way, as we plodded along. We had a boat to catch that would not wait for us as we contemplated any deeper meaning behind the crime scene we had just witnessed. It was SoCal, after all; car chases were as common as palm trees here. As the sirens quieted in the distance we continued our silent progression forward. Once at the port, after checking in and loading into the belly of the ferry boat, we began our hourlong ride. The boat ride itself was not eventful as the tall one slept in the plastic chairs. His heavy head donning a skull cap bobbing up and down as he most the battle with the sand man. I braved the piercing cold wind with the kids to bring them up to the top deck to watch the sunrise. It painted hues of pink and orange across smiling faces as they screamed in joy over the roar of engines slicing sea salt waves. They were invincible in that moment as I shuddered against chills. Upon arrival in Avalon the real adventure began. The misfit family of four of us were ready. Now we just needed to to find the trailhead and begin our trek on the Trans Catalina Trail.

The Trans Catalina Trail officially is 37.2 miles long from Avalon to Two Harbors. But we were going to the very end of the sister islands to the beautiful Starlight Beach. Plus we would need to backtrack a few miles to get to the port to catch our ferry boat home. All in all we were going to hike 56 miles over three full days and one morning. At this point in our life lived outdoors we had climbed mountains, bouldered rocks, and ventured volcanoes in Indonesia, but the idea of carrying my house on my back for days was a slow warmth I was hesitant to light. I liked hotels with comfy beds, warm showers, and continental breakfasts.  Social media was tempting me in its temperous way with images of romantic sunsets overlooking vast views—all inside a tent’s open door zippers. Those who were truly expert outdoors people moved beyond day hikes to camping trips. If I wanted to really get out to where not many folks dared to trespass I needed to trade my Best Western Awards membership for a rented all-you-need backpacking kit. When Christmas came around that year I approached the tall one with my holiday vacation idea to conquer the TCT. Let’s backpack, I said. Really backpack? he questioned. And soon after, much like many of my impossibly unpredictable fancies, we were standing in Avalon heavy with tents on our backs.

The tourist city of Avalon leaves little direction on where to gain access to the wildlife beyond the town. We marched past shops full of trinkets, vacation rentals, and seagulls, toward the edge of town. The wilderness looked over the small town as we walked toward it, hoping for some directions to simply appear. I sighed heavily as the weight of my bag matched my dread of epic failure if we could not even find the trailhead. Each minute passing felt like hours as time was cruel when anxiety is at the wheel. We were suppose to walk for days all alone, far from civilization, but as we backtracked and ran into dead ends along the street hills, we could not even begin as hard as we tried.

A friendly voice startled me as my body attempted to jump, only to twitch from the weight of my gear. I looked back to see an open face look kindly toward us from her golf cart. It was a local who collected us easily and rattled on about her job at the hotel and that it was no problem to bring us most of the way to the campground where the Trans Catalina Trail started. Her eyes widened an inch at our news that yes, our four- and eight-year-old planned to walk the entire trail on their own limbs. She shrugged. She had never ventured on the trail. Not really my speed, she explained. But if it was what we did then she wished us genuine luck. We thanked her sincerely for the three-minute golf drive as the wooden sign pointing to the trail came into view. Here we go, I mumbled as I lined us up for a family selfie in front of the trailhead sign to document us as we were in that space in time.

The first day’s destination was Black Jack Campground. It seemed a reasonable enough destination at 15 miles. The sun was barely up at 7:45 a.m. as we stumbled along to the ridgeline. My backpack felt heavy against my hips. I pulled and tightened and adjusted all the various clips and buckled in any attempt to make my tortoise shell feel more normal and less oppressive. The kids ran and stopped on the more open fire road until it skimmed to a more familiar trail demographic. We marched single file in our usual lineup. I took the lead, referring back to my trail map, and checking time spent in a manic way on my phone. Then after me trudged Buckets, nipping at my heels going from too close to too far in her uneven pace along the path. After her was tiny Monkey, just plodding along, testing his tiny legs to stretch to our long ones—always a cloud of weary anxiousness surrounding him as he followed. And finally the Tall One; bringing up the rear, holding us together, giving us the support we need. Always our rock and always our foundation. The sun grew warm as I removed layers of clothing. I was thankful we decided to tackle this trail in the winter seeing that there was absolutely no covering of trees to prohibit the heat of the sun from glaring down on us. I paused; shhhhh – shhhhhh – I was desperate to stop the talkative crew behind me. I needed them to silence as I pleaded. In my research of the islands I came across the surreal phenomenon of its local inhabitants: the bison.

Rumors tell the tale about how in 1924 the herd of bison were brought over as moving proof for the silent film version of Zane Grey’s western, The Vanishing American. They were too expansive to justify a trip off the island so the few grew up to as many as 600 but now hover around 150 bison beasts in total. 150 creatures I wanted desperately to see. The trip would be a success unless we saw a bison. I wanted to see a bison. I needed to see a bison. We must see a bison. And I found myself growing in volume in my attempts to quiet the peanut gallery behind me. There, in front of us, in all their aspiring glory, were two bison. Simply munching the straw grass. Just standing there not moving beside the trail we were hiking along.

Buckets was the first to gasp as I in reflex grapes her slender arm to stop her from full on sprint toward the creatures. She was my fearless one; always testing the boundaries with such joy. But running to a creature whose head alone weighed three times as much as her entire being was not a good choice that I had to squash. I needed not to worry about Monkey. He already was actively trying to disappear behind the Tall One. I could hear his breathing grow more and more laborious as his fears rose. His anxiety, I imagined, was already whispering in his ears that the bison were there to painfully crush him. I stood there between my two drastically diverse children; one wanting to hug her newest pet and the other trying to dig himself a hole in which to hide himself in. The Tall One, unaware of the play of characters around him smiled in his goofy way, well look at that.

The remaining miles to Black Jack Campground were spent in a high of tiredness and awe of the bison. As we settled the four of us into the one tent I smiled. We survived. Day one we survived.

A former bunhead ballerina turned skoolie dwelling mountain woman. After eleven years being the mom to 34 children in foster care and at risk homes I have decided to trek the PCT solo. I am going to just take a walk and hopefully not die.