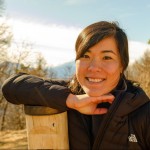 “哎呀, 你想要干什么? You want to do what?” said my mother, aghast, when I told her a few months ago about my plans to hike the Pacific Crest Trail. She and my dad then proceeded to tell me over the phone about how it was not safe for a woman to embark on such an expedition, especially now. Being Asian, especially since the existence of COVID-19, meant we were more vulnerable than ever. Being an Asian woman or elder – doubly so.

Despite the recent significant uptick in violence and racism against Asians in the United States, I’m not particularly worried about being shoved down a crevasse or assaulted with an ice axe by a bigot. My clumsy ass can fall down all by myself and I am also perfectly capable of bashing myself in the face with a blunt object, thank you very much. However, in part due to recent events, I started thinking more about Asian American & Pacific Islander (AAPI) representation in the United States, especially in communities such as outdoor recreation, and how stereotypes and cultural expectations can largely influence the hobbies or passions we choose to pursue.

The Missouri Banana: A Tale as Old as Almost Thirty

As a young girl, I watched as adults regularly scorned or mocked my parents for their English-speaking skills (which foolishly instilled in me at a young age that being bilingual or multilingual was shameful, and also left me with the impression that being non-white meant we were somehow lesser than). I was picked on for the food I ate until I no longer wanted to eat the bento boxes my mom would pack for my school lunch (“is that dog?”), and struggled to find my place within the narrow confines of what I felt society would allow me to be. I was ashamed that I was different and wanted desperately not to stick out, but I also wanted to feel respected despite being Asian while American. This is not to generalize and say that all white people are assholes, but rather to point out that singular instances of cruelty (or kindness), however innocuous it may seem, can have a lasting impact.

Growing up in a Midwestern suburb, there was not a robust or thriving AAPI community and therefore there was not a large selection of people I felt I could look up to that also looked like me and had similar experiences to whom I could relate (the number of Asians outside my immediate family that I knew growing up are in the single digits). As a child, the question “who is your hero?” often stumped me, because any answer I could think of felt insincere. I couldn’t associate a word with it then, nor did I know exactly the source of this feeling of isolation, but I was searching for community and for representation.

The Myth of the Model Minority & Outdoor Recreation

Minorities in the United States often struggle at some point with their cultural identities. I think for children of immigrants (regardless of race or ethnicity) this is especially true. No matter how many times I was called a “banana” or a “Twinkie”, it never really felt accurate. I was, in fact, not white on the inside, but I also didn’t feel “Asian enough” either.

It wasn’t until I moved to Japan and met other AAPIs that I fully understood the importance (and fun!) of having a community of people who know what it’s like to grow up between cultures. I’ve largely found amongst western-born Asians (albeit anecdotally) that our experiences, regardless of ethnicity or socioeconomic class, are remarkably similar. Like our counterparts that remained in the East, most AAPI families also focused intensely on academics and on decidedly less adventurous extracurriculars. Socioeconomic status largely dictated the quality of the academics and extracurriculars, but did not significantly deviate from the script of “How to Be Successful While Asian / AAPI”.

For working-class AAPI families like mine, there was an extra layer of challenges and stereotypes that came with being poor. The injustices suffered by working-class immigrant parents, in addition to living up to the high-achieving Asian American “model minority” reputation, led to an unrelenting emphasis on academic success. This myth of the model minority implied that if we were studious, quiet, uncomplaining, and unfailingly obedient, then maybe we could achieve success. Childhoods filled with Kumon, music lessons, and STEM-related after-school activities meant we could attend prestigious universities and become doctors, lawyers, or scientists – roles in society that our parents hoped would mean we would be respected despite our lack of money or the color of our skin.

The unspoken lesson here was that, especially for working-class Asian families, our parents sacrificed their dignity so we could have a chance to earn ours. Consequentially, non-academic extracurriculars such as outdoor recreation (or really anything else generally regarded as fun) was discouraged or simply wasn’t emphasized at all, because not only was this not financially possible, but it was also contradictory to the western stereotype of the studious Asian and did not follow the traditional cultural model of how to be successful (and thus risked being perceived as disrespectful to our parents’/ancestors’ sacrifice).

By the time I had decided I wanted to try backpacking, I was already living in Japan. To the surprise of no one, finding community and feeling represented there was not a particularly difficult task.

During my many hours of PCT research (Google-sleuthing, Instagram-creeping, forum-lurking), I noticed that I didn’t see anyone else that looked like me. It was, much like where I grew up, a sea of Caucasian faces (note: I am not implying this is bad. I simply mean that there are a lot of white people that like backpacking). A scroll through Halfway Anywhere’s PCT Surveys from 2013-2020 concluded that Asians represented roughly 1-3.7% of thru-hikers (granted, this only accounted for the people who took the survey – maybe there was a rogue or two out there who, like me, said “fuck stats, I always hated math anyway”).

I suspect that the combination of the self-eating cultural expectation within the AAPI community of unwavering academic pursuit, financial constraints / lack of access, and the stigma of the docile and decidedly not-outdoorsy Asian contributes heavily to the limited AAPI representation in outdoor recreational communities.

This wasn’t particularly worrisome or anything, but I was a little disappointed. With whom would I bond over similar cultural identities and experiences over a pot of Indomie? With whom could I discuss in great detail juicy K-drama plots and weeb out to anime and manga? Or bond over how our parents wrapped tv remotes in plastic, or how all Asian dads sneeze-shout, or how Asian moms always brought us cut-up fruit? Did anyone else on trail have parents that used the dishwasher as storage? Why do Americans wear shoes in the house? As excited as I was when I queued in the virtual line for a PCT permit, I knew that I would likely miss these little things.

To be clear – I’m still stoked to be hiking the PCT in April, and I’m very much looking forward to meeting other hikers regardless of race or ethnicity and sharing in the common experience of being grungy hiker trash and celebrating our differences. I want to walk with you, shove food in my face with you, complain about how our feet hurt, why the fuck is it so goddamn sunny, why won’t this stupid rain just stop, I swear to God if I get bit by one more fucking mosquito, fantasize about what the next trail town will be like with you.

But to my fellow AAPIs – you’re not alone! We may all be starting on different dates, different paces, different places, but know that somewhere on trail there’s another one of us disappointing our ancestors and challenging stereotypes, one literal footstep at a time.