Skipping Miles, and Reaching the Terminus

I made it safely to Canada! Things went quickly at the end, here’s how it happened.

Making the Hard Decisions Together

I stayed the course northbound through the smoke in Northern California and into Oregon. My plan was to keep on keepin’ on until the fire or the winter stopped me. I had met some new cool friends like Peacefoot, Big Red, Starburst, and Switchbacks. I was doing math almost daily, and keeping mileage charts in my journal. I knew I was cutting it close, but I felt like if I just pushed hard enough, I could make it to Canada before the snow came.

When I got phone service at Big Lake Youth Camp near mile 2,000, I had three texts from Baloo. The first text asked my ETA to Government Camp, OR. The second asked my ETA to Cascade Locks and the third said something like, “Haha, maybe you should just call me.” Baloo is trail family, he was off trail at home in Oregon, and I trusted his judgment about winters in the Pacific Northwest. I knew I might be in trouble.

As always, my trail family supported each other. Baloo never said I had to skip miles, or that I’d die if I didn’t, or that I was dumb for staying the course. Instead, we had a long, honest conversation about what I wanted from my hike. He asked what I wanted the end of my hike to look like. Some people need to see the monument. Some people want to hike a continuous footpath, even if it means finishing the trail over two summers. Some people just want to keep hiking until the winter runs them out. All of those options are equally valid, and they’re individual choices. After some thought, I decided I wanted to see the terminus, I wanted to walk into Canada. 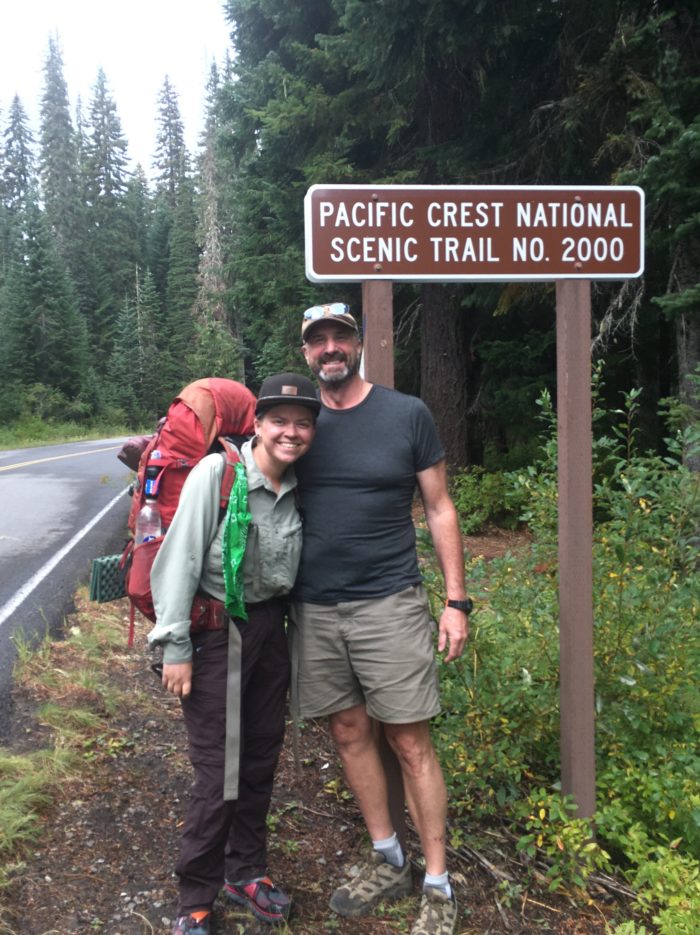 Baloo and me near Trout Lake, WA.

Baloo and I ultimately concluded that to stay safe, I’d need to skip something in Oregon or Washington. He was looking at maps and doing math from home while we were on the phone; I was mostly just hoping he wasn’t right. After our call, I stayed up late in my tent on the beach at Big Lake, doing the math over and over. I remember the little red light of my headlamp, and wondering if I was keeping my friends awake. Wondering what news I’d have to tell them in the morning. Knowing they were planning on us hiking out together. But every time I recalculated everything, I kept getting the same numbers Baloo did. I was looking at hiking 20+ mile days, with no rest days, and I’d still be pushing my weather window to its limit. Baloo had offered to come get me, and I decided to let him.

From my journal that night:

In the most gentle Baloo way, he said I won’t finish on time at this pace. I brought up our friends Jinx and Twinkle Toes; he said he thinks they’re “within striking distance” of finishing. I asked if he thought I was. He gently, calmly, and quietly said no. I felt relieved to have somebody shoot it straight, to cut the shit. Someone I’d actually listen to, who I trust. I don’t really know if I would’ve listened to anyone else.

In the morning, I was the last one to breakfast. I sat with Peacefoot and Big Red, and told them I’d decided to skip 228 miles, from Highway 20 near Sisters, OR, to Trout Lake, WA. I felt conflicted, but I knew it had to be done. My friends supported me, and I supported their choice to stay the course. More friends started to trickle into camp, and it was getting harder and harder to say goodbye. I hiked out of Big Lake Youth Camp and up to the highway. I hitched into Sisters and Baloo picked me up. I spent a few days at his house, where his family took me in like their own. Baloo drove me into Portland to see old friends and buy new shoes. He drove me into Washington and dropped me off near Trout Lake. My first four days hiking in Washington were met with rain, snow, and sleet. I knew I’d made the right choice for me, and wondered about the friends I’d left down south. 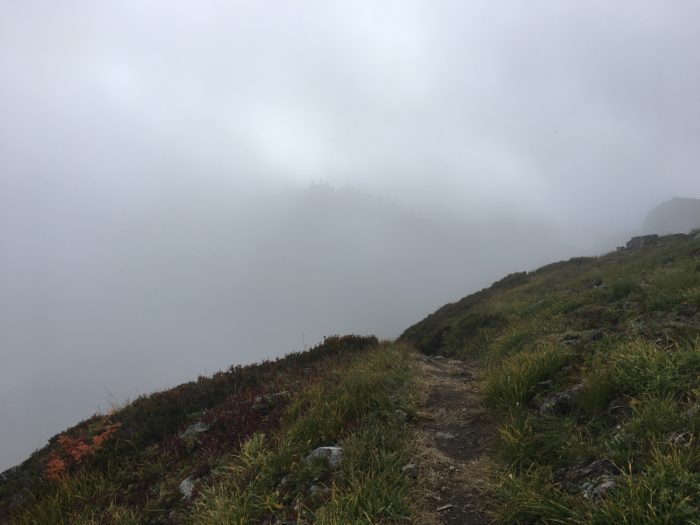 Most of my hike through Southern Washington looked like this. It was cold and wet, with very low visibility.

In the days that followed, my Dad messaged me; he wanted to come visit again. He wanted to hand-deliver my last resupply box and my passport. I’d been eyeing two fire closures in Washington, and we decided that he’d drive me around the first one, between Stevens Pass and Stehekin. This saved me 27 detour miles, but necessitated skipping another 70+ open trail miles due to the infrequency of paved roads that far north. I felt conflicted about that jump, too, but after being cold and wet for a while it seemed prudent to get to Canada as quickly as possible. I got to Stevens Pass in the rain and hitchhiked to Wenatchee, where my parents had reserved a room at a nice hotel. I promptly stunk it up drying out my wet gear. The next morning, Dad drove me to Chelan, WA, where I caught a ferry to Stehekin and then a bus back to the PCT at the northern end of the Bannock Lakes Fire closure. 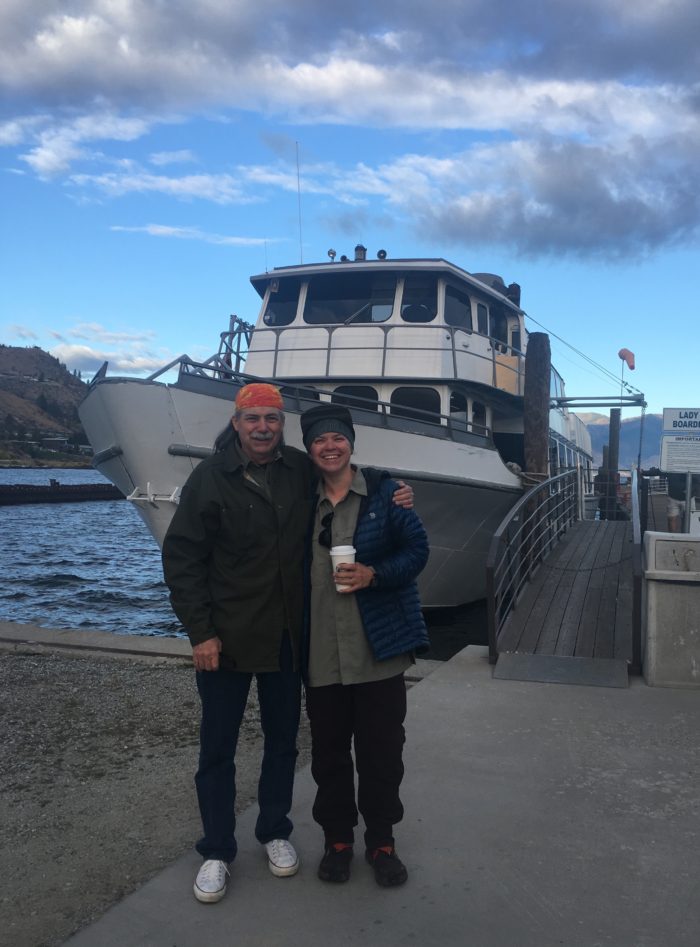 Dad and me at the dock in Chelan, WA.

From Stehekin onward, the weather was beautiful. I met some new friends on the Stehekin bus and wound up sticking with them for the rest of the trail. Queso, Koolaid, Reverse Pigeon, and I got trail magic at Rainy Pass from an awesome guy called Madd Baker. He told us the weather was supposed to hold out for a week, but that there would definitely be snow on Monday. We amped up our miles, and met lots of other hikers doing the same. The energy on trail was promising, and we all felt like we might just make it out warm and dry.

In my last week on trail, I found lots of friends I hadn’t seen in a long time. I saw Chief and Skidmark, trail family from the desert that I hadn’t seen since. I saw Nemo, who I’d entirely lost track of after Warner Springs. I walked up on Captain’s camp one morning, whom I hadn’t seen since Donner Pass. Chess found me; I hadn’t seen him since Scout and Frodo’s house in San Diego. He’d never even known my trail name; it felt really odd to hear “Katie?” as he walked up behind me. When I got to Manning Park, I had messages from The Rainbow; she was off trail but living in Vancouver and offered to come pick me up. She drove Queso, Captain, and me to town and let me stay the night with her before my bus in the morning.

From the beginning to the end, the trail provided me exactly what I needed when I needed it most. I learned to trust the experience and to trust the people I met along the way. I hiked the PCT in 177 days, though I skipped roughly 500 miles. I started on April 4, and crossed into Canada on Sept. 27. Now I’m temporarily back in Texas, saving money and making a plan for whatever comes next. 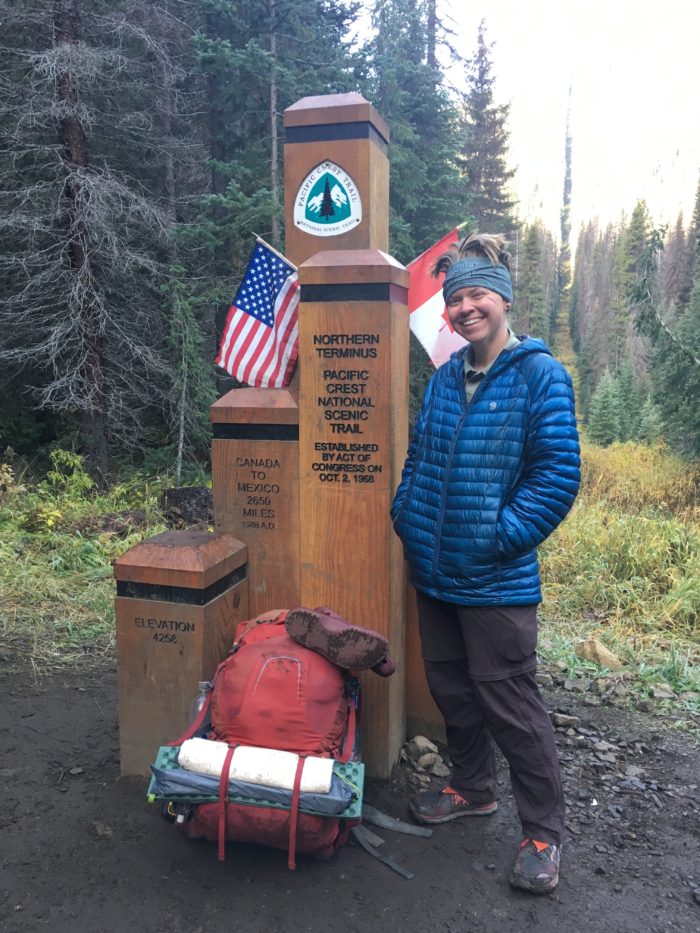