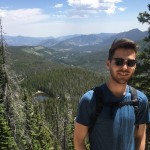 As outdoorsmen and women, we have a duty to protect the places we play in. Our parks and wilderness areas are sacred to us but we need to remember that their status and beauty isn’t permanent. Invasive species, illegal mining and logging, climate change—a million problems are all piling up into an overwhelming mountain that threaten the natural world around us. That said, I didn’t want my first post to be all doom and gloom. I wanted to go the opposite route by highlighting how hikers can get involved and help make a difference right now.

If you’re hiking the CDT or PCT, you have a unique opportunity to help fight illegal logging in the US. At the very least, you could think of getting involved as an upgrade from hiker trash to something more akin to “scientist with rank BO.” If that’s not resume worthy, I don’t know what is.

I recently interviewed Gregg Treinish, founder and executive director of Adventure Scientists. In a nutshell, Adventure Scientists partners outdoorsmen with researchers to collect data at large scales from hard-to-reach places. Their work helps form public policy at various levels and has already been used to double crop yields in parts of India.

What follows is a transcript of our interview, lightly edited for readability.

Jackson Pope: If I had never heard of Adventure Scientists, how would you explain it to me?

Gregg Treinish: Adventure Scientists creates a way for anybody who loves the outdoors to contribute while they’re out exploring. I’ve always had this feeling like I wanted to do more with my time than explore for exploring’s sake. So I created Adventure Scientists to give people that opportunity to create meaningful, lasting differences in the world while they do what they love to do.

Gotcha. So is your background as more of a scientist?

I actually started as more of an adventurer, as a thru-hiker actually, and I do have an undergraduate degree in wildlife biology. I was working as a wildlife biologist for a while but I certainly don’t have a doctorate or anything like that.

How did you realize this was something that researchers needed then, to have more eyes and ears out in the field for them?

I was working as a field technician out collecting data, actually some of the best jobs of my life, tracking lynx and wolverines, grizzly bears, spotted owls, and sturgeon. I realized that I was able to use my outdoors skill-sets to make a difference. The people I was doing it for were different people, meaning numerous people who needed people with outdoors skills to be successful. It dawned on me that this was something that needed to exist.

I haven’t worked with wildlife before but I know it can be hard to get good data and anytime you can find someone to help with that is huge.

Right. And it’s not every scientific issue. There are some conservation issues or some scientific endeavors that you just don’t need data collected from the outdoors or data collected from remote places, so that probably wouldn’t be a partnership we’d pursue. There are also a number of other scientists that very much need data from remote environments and from places all over the world that they can’t get to themselves, especially at scale.

You touched on it before; you’re a thru-hiker?

Yep. I’ve thru-hiked the Appalachian Trail, I was the first person to walk the length of the Andes Mountains from the equator to the southern tip of the continent over the course of a few years, and I’ve led expeditions all over the world for National Geographic.

How difficult is it for backpackers to get involved? Are they out there collecting samples, taking notes, lugging around rocks? That kind of thing?

Coming from this adventure background and outdoors perspective, we really appreciate how difficult it is to ask you to carry another five, ten, 15 pounds. We really focus on finding projects where we can keep it light and find ways to keep you engaged as you’re progressing through your thru-hike and your outdoors experience.

For example, we’ve got an awesome project this year taking place across the entire PCT and part of the CDT, where we’re collecting specimens of cedar and redwood. Anybody who’s going to be trekking, especially on the PCT, we’d love to have get involved. They can come to our website and sign up. You do have to apply to be a part of the project, and if you’re accepted, you’ll basically collect leaf samples from those species I mentioned. We’ve got these tiny little vials that weight nothing, with desiccant to keep the samples dry. You systematically sample each stand you come across and we’ll teach you how to do it. You don’t need any special skills and we’ll get you all hooked up. You can apply for this one here.

Does it cost anything to volunteer?

Related to that, where does your funding come from?

We have a fee-for-service model, where the scientific partners pay us to get them data at the scale they can’t get themselves. We are also supported by philanthropic partners—that’s everything from foundations to high net-worth individuals who love what we do and love that we not only expose the outdoor community to science and get them involved and engaged, but also collect some really useful data that has the potential to help change the world.

So with that one project in particular I mentioned (in timber), what we’re doing is trying to create both genetic and chemical reference libraries so that when these species shows up at stores or ports or at a supplier, we can test the wood that’s coming in and see if it’s been legally or illegally harvested.

Are there any other specific issues that you’re trying to get involved with, but don’t have partners for yet? Is it a case where you’re seeking partners, or are they coming to you?

We’re networking all the time with the scientific community and we’re asking them what data needs they have. We look for three things and we really screen our projects to make sure that first and foremost it’s a data-limited issue that they’re trying to solve. If it’s a political issue or if you’re trying to change hearts and minds, that’s not necessarily the project that we’re going to be a fit for.

But if there’s a data limitation to creating a new technology, like the one I just mentioned for timber, or another example is we collected the highest known plant life on Earth on Mount Everest at 22,000 feet. Our partner on that project took the fungi that were living symbiotically with a moss at 22,000 feet and he’s been able to inoculate crops in India and double crop yields successfully across 600,000 acres, scaling to 2.5 million acres in the coming year.

We look for those technological solutions and breakthroughs that can be found in these remote or extreme environments. It’s not always the remoteness that matters, it’s the scale and availability of data from the outdoors that matters. We really look for those tangible pathways for every project, and that’s kind of our second criteria.

Third is that there has to really be a clear need for the outdoor community. Once we’re networking with our partners and looking for projects like this all the time, we screen them pretty heavily so we can guarantee our volunteers that what they do really matters out there.

So scientific partners are generating the ideas. Most often they’ll come to us saying, “Hey, I know I need data, but I don’t know how you work” and we’ll work with them to develop a full-blown project. Some of the other ones we work on is this amazing pollinators project that people can work on anywhere there’s pollinators on Earth, that’s influencing how the Forest Service and other governments react to climate change. It helps them protect remote ecosystems from pollinator die-offs and will influence the forest planning process that they go through. This pollinator data will be included in that plan.

Another example is the wildlife connectivity study that will be launching across Montana this year. Road bikers will be out taking photographs and geolocations of roadkill. The partners on the project will use that to prioritize mitigation, such as at overpasses and underpasses, signage, things like that, to limit wildlife collisions.

Sounds like you guys have a lot of projects going on, and it doesn’t take a lot of work to start making a difference.

Yeah, with a little bit of training. Once you’re accepted you go through the training, which depends on the project. In the case of the timber project, it’s about one hour and we have staff here who can support you along the way. If things aren’t working well and you need to adjust, we have an amazing team of people that work with you and help you figure that out so you’re successful in what you set out to do.

Then you mail your samples into our offices and we follow up, so you know how your data were used and fit into the bigger picture. You can keep up with the progress of the project.

It’s not like you need to be especially skilled at one thing; it’s all handled in the training.

Not at all. We have some projects in development where we need tree climbers or people to go up above 20,000 feet. There are things like that that come up from time to time, but there are opportunities for people out on day hikes to get involved.

Is there anything else you want to bring up to get the word out?

I think that this is an opportunity for us as an outdoor community to rally together and make a lasting difference in the world. Imagine a world where science can drive solutions and it’s not a limitation of the funding, it’s not a limitation of the lack of access to these environments at scale. We can rally together as a community and make a real difference for the places we love to play.

I feel a responsibility to do that, I’ve gotten a lot from the outdoors. Obviously, we’re all concerned about the changes we see in the world, especially in the way our government and other governments around the world are treating the environment. I think that collective action is a huge response to that. If we rally up together and put our energy into a common direction we can achieve amazing things together.

You can read up on Adventure Scientists here, and submit a volunteer application here. Project-specific application for the Timber Volunteer project can be found here