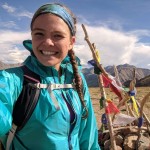 Wait, I’m in the Desert? Feat. GOT Watch Parties and Giant Blood Blisters

I’ve had a great first week on the PCT. I’ve made it over 100 miles, I’m making good miles, and I’m having the time of my life of course. It feels so good to be back in the hiking community. Let’s start from the beginning.

Staying at Scout and Frodo’s the night before was great. They made everything so easy from the second I landed at the airport. The dinner of stuffed shells was amazing and breakfast in the morning was just as good. The dinner talk that they give is so sweet and it’s a great thing that they’re educating hikers before they get out on the trail. I knew almost all the information already, but I’m sure there are people who don’t and it’s a huge help. Not only for them, but for preserving the trail as well. 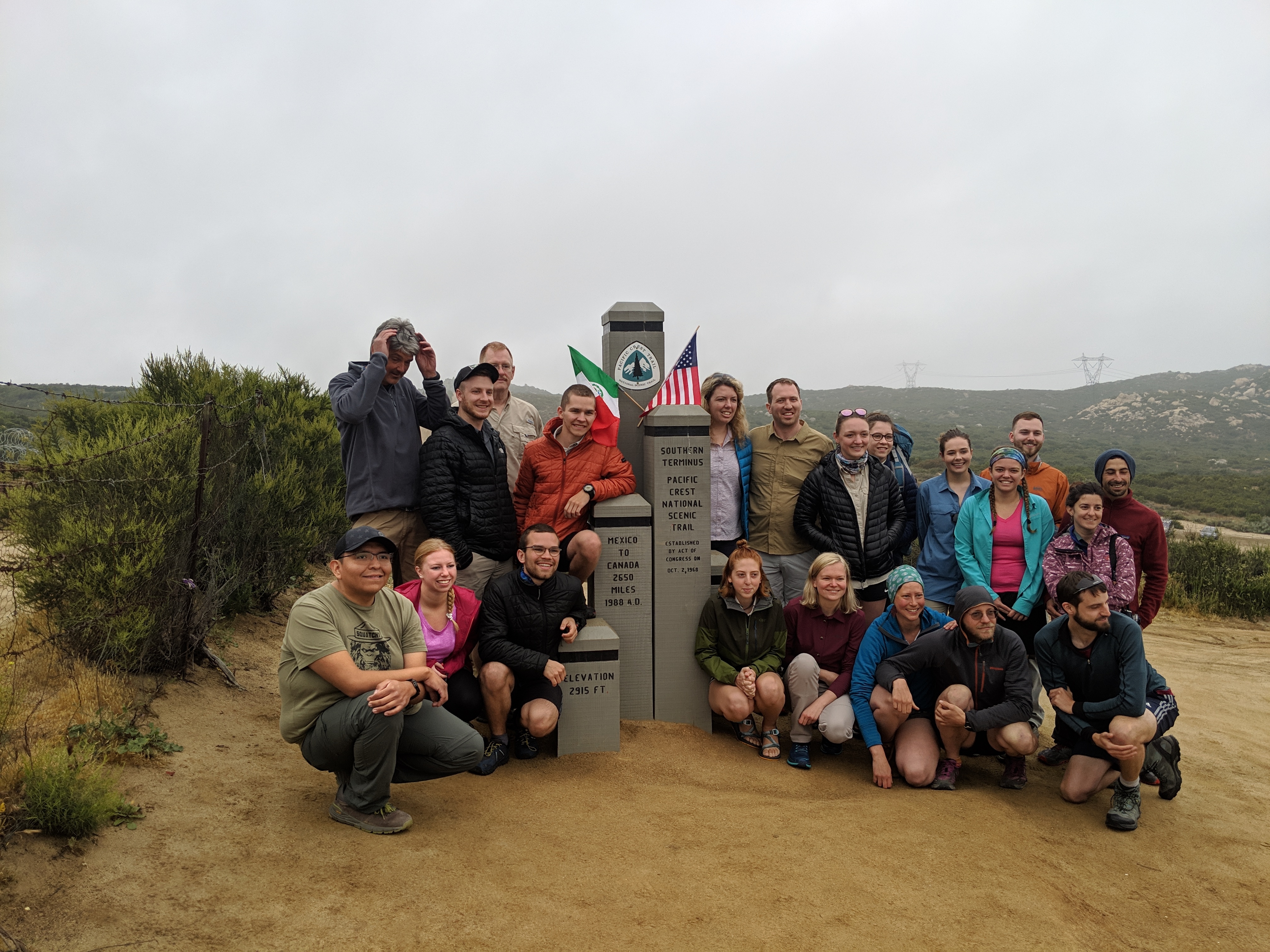 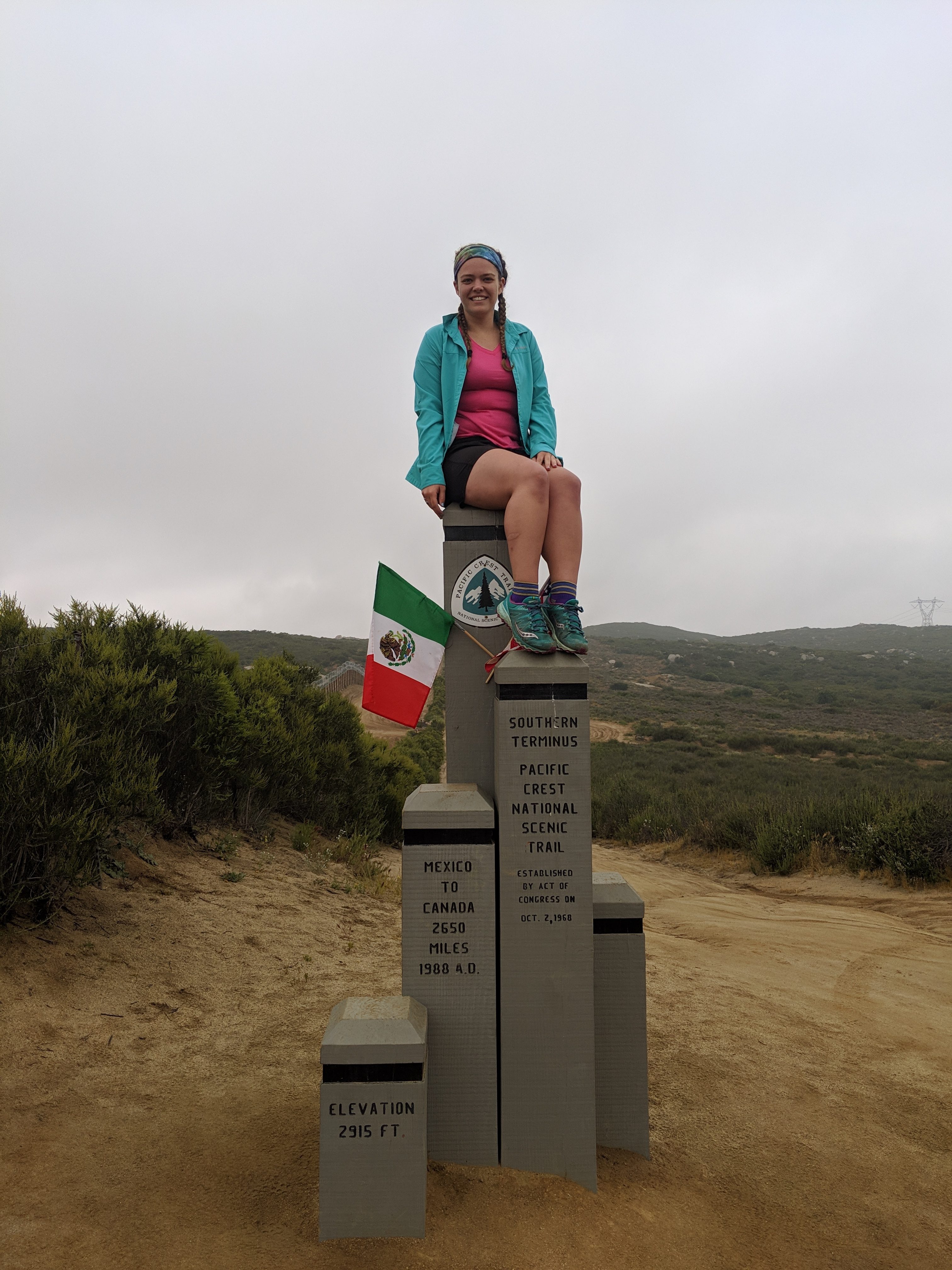 The send-off from the border was quite the experience. It felt like the first day of summer camp. We got the speech from the McShaps—very similar to the dinner talk the night before, and then we were off. All twentysomething of us at the same time. The miles came so quickly at first. By mile six my feet were starting to hurt but I felt good and decided I would push on to mile 15.4, Hauser Creek, for the night. I made one stop for lunch and pushed all the way through otherwise. I was pretty sore when I got to camp, but in good spirits. It wasn’t even 3 p.m.! I made great time. I almost went to bed immediately but managed to get myself up to socialize. It was a good night, and a group of us played B.S with mini cards.

Day two was a long one. I hiked 16.6 miles. I managed to fit a quick town stop in there and got my first burger of the trail at 9 a.m. The rest of the day was mostly good, but the last few miles were rough. My feet hurt, I was so tired. In general it felt slower than yesterday.

Overnight it rained, and my tarp-tent held up great! Until I had to take it down, that is. I only had ten miles to hike but it started pouring on me and was freezing. They were some rough miles. I was so glad to finally arrive at Pine House Tavern in Mount Laguna. In the afternoon the weather cleared up. I was staying in town anyway because I wanted a shorter day to rest some. I came across some hikers looking to fill up a cabin so it worked perfectly. It was a great day hanging out with all of them. 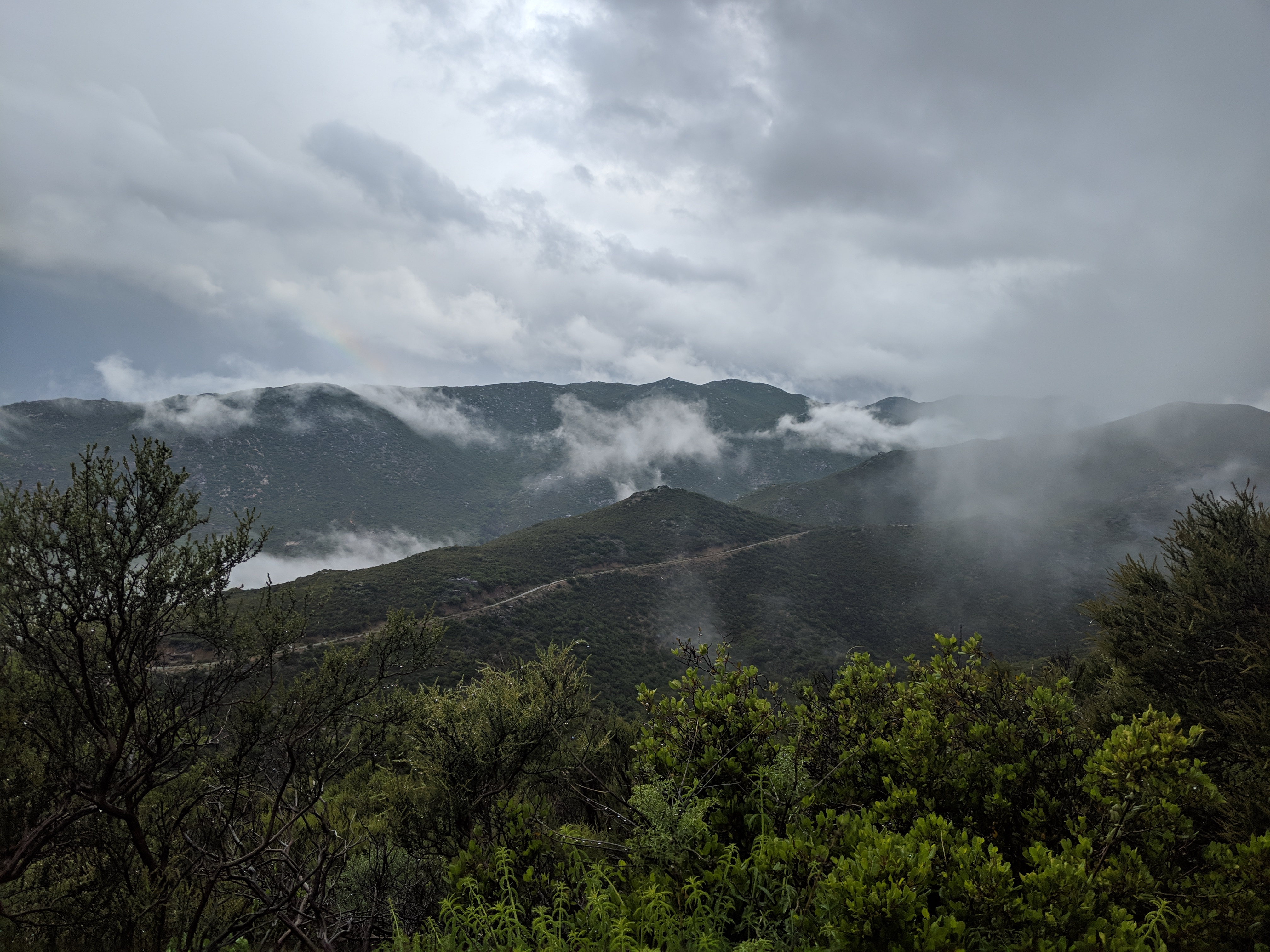 The weather so far has been so opposite of what I’ve expected in the desert. It’s been cool, cloudy, poured, and water hasn’t been an issue. I’m not complaining about (most of) it though.

The next two days have felt more like the desert. I did 14 miles out of Mount Laguna and felt great. I had a Game of Thrones (GOT) watch party with my new friends from the cabin, Wiki and Chris, and a newcomer, Hana, who had heard we were watching it from little trail birdies. To watch the episode, we had to rock scramble for good service and all squish uncomfortably on one rock. I also ripped my pants on said rock. It was a good time, though, Wiki sewed my pants and Hana shared watermelon sour patch candy. We also tried to find the best method for making the show un-buffer. Magic tricks were used. 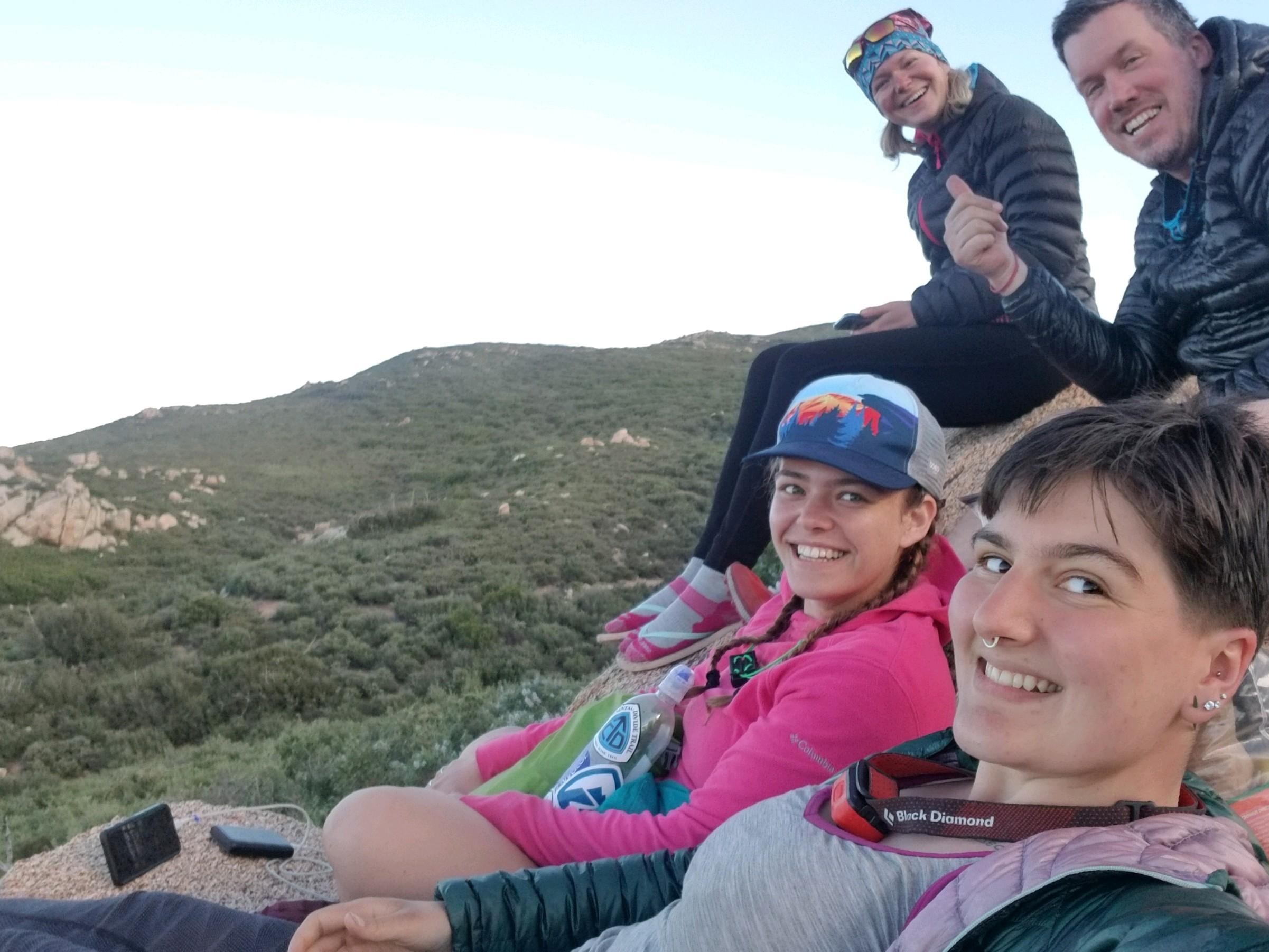 Day five, for some reason, I hiked 21 miles. I started hiking with Chris pretty early on, and we had to team up on water when we realized we had missed the last stop. I had gotten plenty for the dry stretch to Scissors Crossing but he had not. We had enough that it would probably be OK between the two of us. Luckily, there was a surprise cache five miles into the dry stretch. We found out the last source we missed was dry anyway. Around lunchtime, I noticed that a weird green-colored blister appeared suddenly on the the bottom of my foot. I taped it up and kept an eye on it.

The second half of the day was rough but we were determined to make it to Scissors Crossing. I remember telling Chris, “This is going to be the worst 1.6 miles I have hiked in a long time” as we got to the end of the day. I was in a lot of pain. It was great when we got there and got to hang out with a bunch of hikers I’ve been seeing since day one. We all cowboy camped under the bridge. For a highway underpass it’s surprisingly nice, it was sandy, and had a great view. 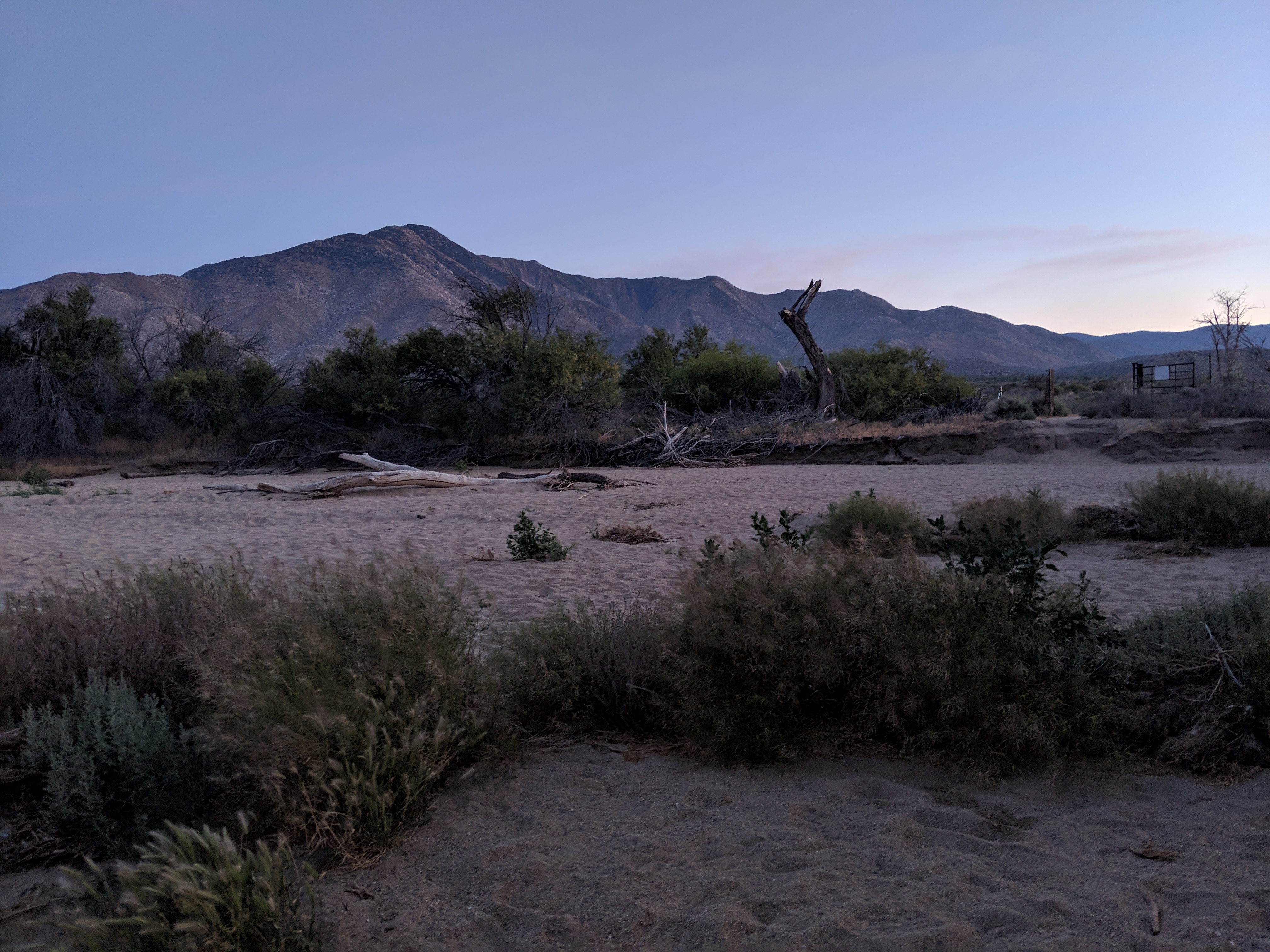 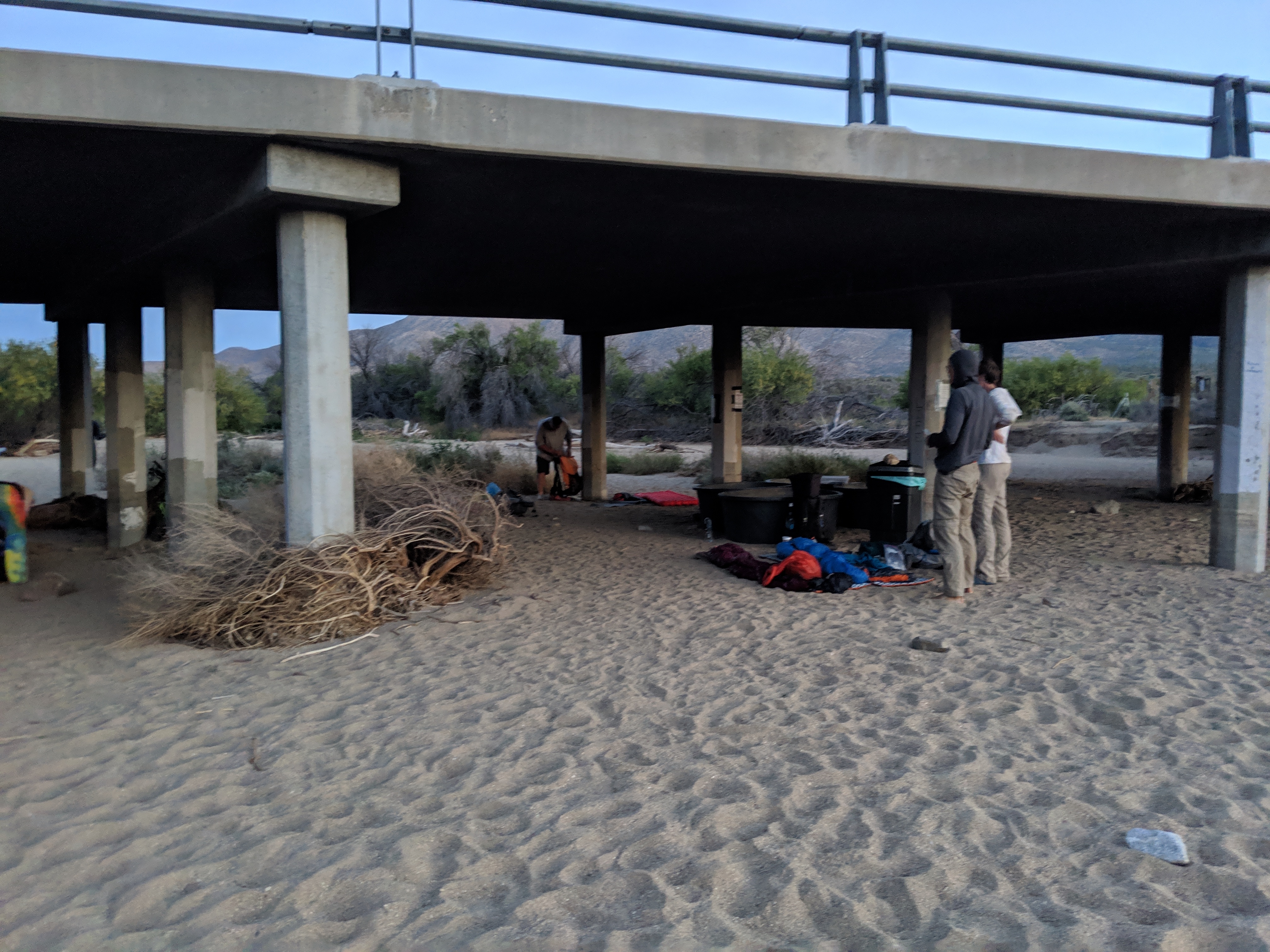 Today I spent the day in Julian with my friends I met at Scout and Frodo’s, Elise and Claire (now known as SOS and Ashes, respectively). As soon as we packed up and about to hitch a ride in, the local trail angel Ghost appeared and offered us a ride. He had picked up Chris (now Dory), who left an hour or so before us to hitch a ride but had started walking the road instead, thinking that was how it was done. Silly Dory. Ghost gave us a lot of great tips about hiking in the desert and resupply on the drive in. Our first stop in town was Moms Pies that gives free pie and a drink for thru-hikers. We did our resupply, hit the candy shop, and then enjoyed pizza and beer at the local brewery before hitching back to the trail. 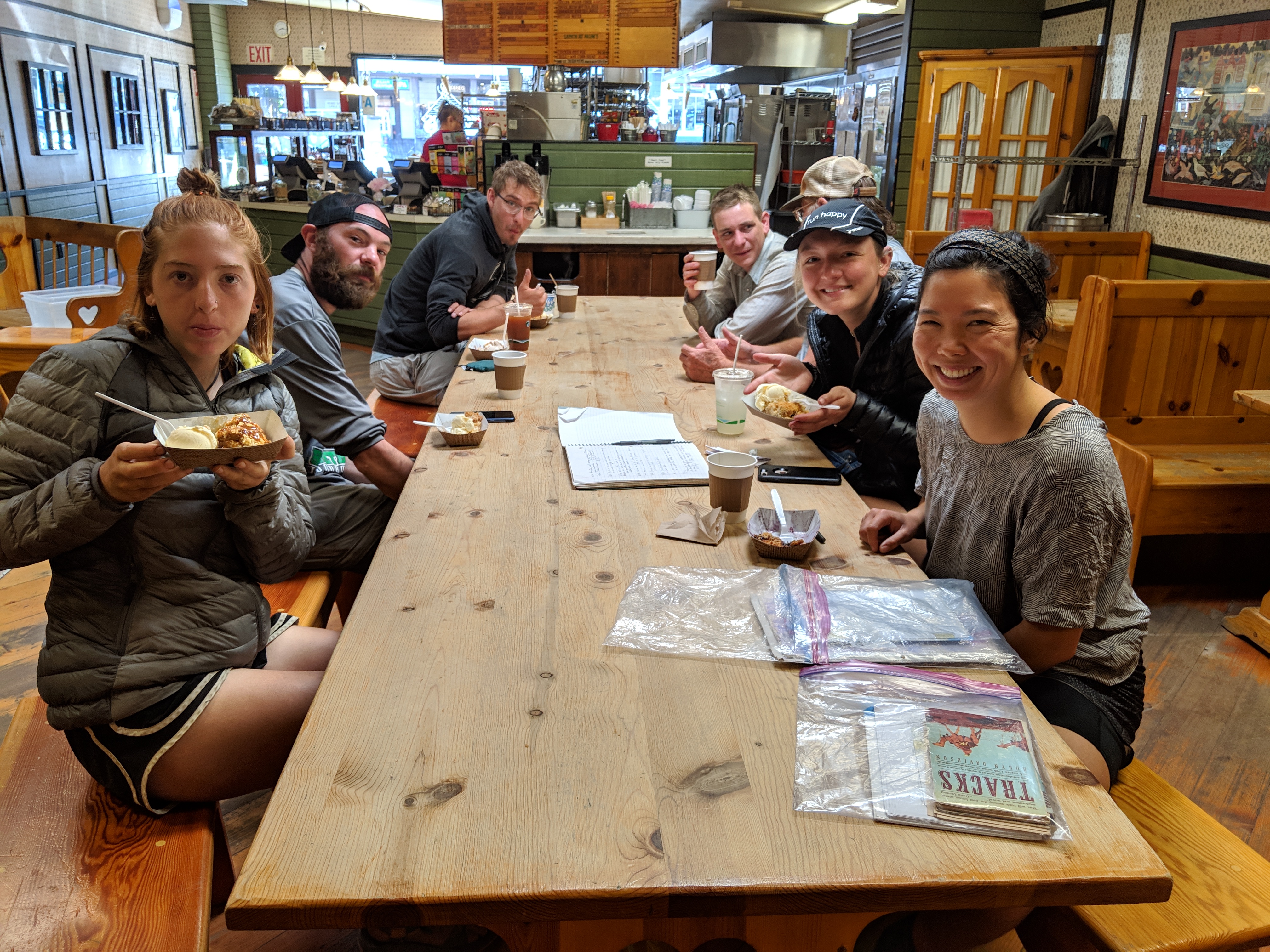 At Scissors Crossing again, we wanted to wait out the heat before hiking again and decided to watch the Game of Thrones episode again. No one else had seen it but me. Villnis, another hiker I’ve been seeing since Mount Laguna, joined Ashes and SOS for the watch party. This one was much more comfortable than the first one. Once the sun went down, I hiked about six miles out of Julian with Ashes and SOS. We cowboy camped on the ridge and told lots of stories, getting to know each other better. We had packed out pizza and beer and enjoyed that as we chatted. It was a good night. 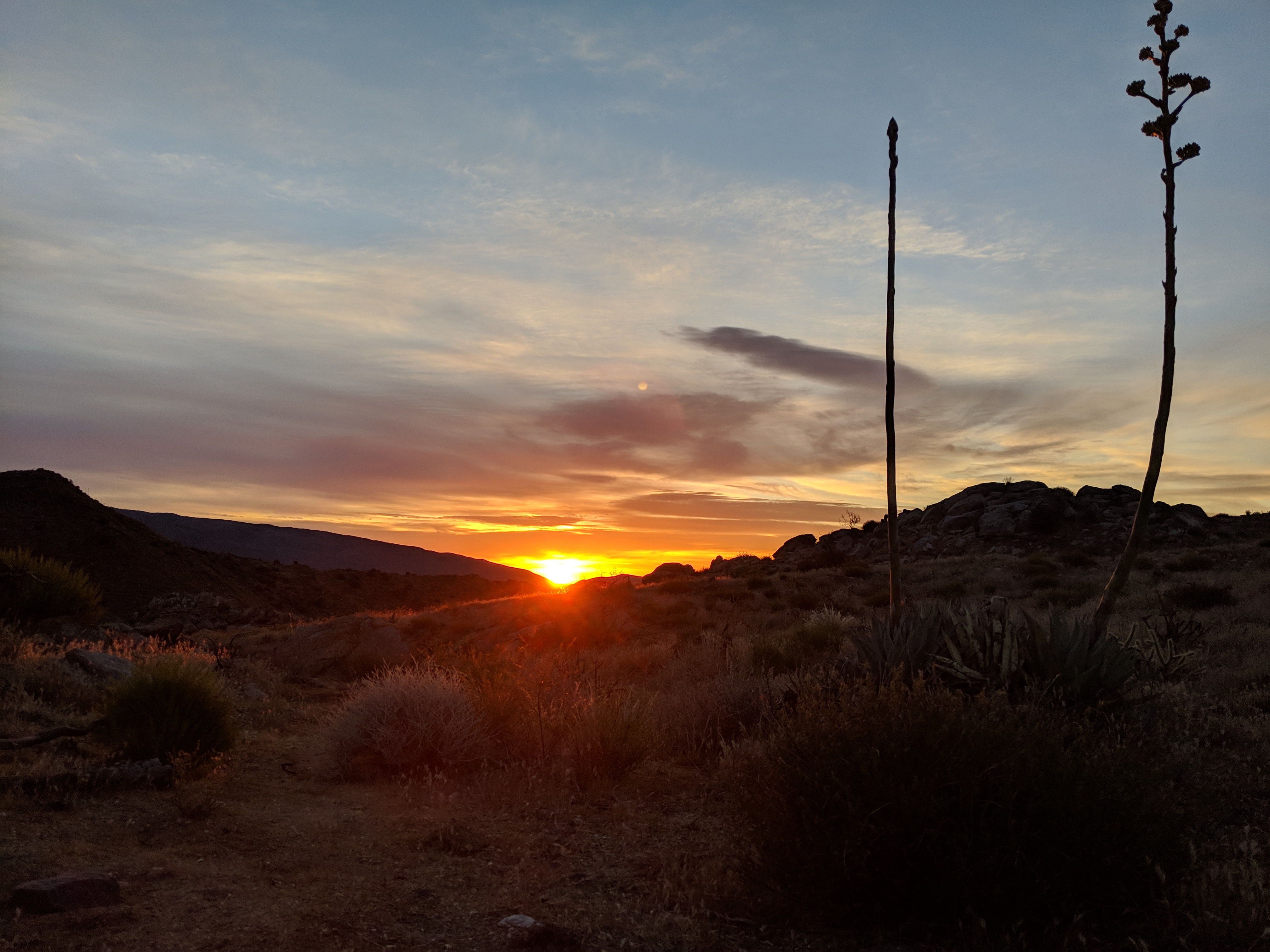 The sunrise the morning after cowboy camping.

We hiked 18 miles on day seven. The first eight were to a water cache, where everyone was taking a siesta in any shady spot you could find. The sun kept going in and out of the clouds and changing the temperature drastically. It was cold when it was in, and too hot to hike when it was out. More bizarre weather for the desert. I was actually able to nap for about a half hour (I’m usually not much of a napper). My blister had gotten huge at this point and a giant pocket of blood. I was waiting until town to lance it.

Eventually, I left for the last ten miles to the next water. On this stretch, I heard my first rattlesnake. A hiker in front of me passed it first and it had slithered across his foot and hid in a bush on the side  of the trail, but was still rattling away. We passed by quickly and all was fine. I wish I could have seen it, though. A new hiker I met named Moose hiked with me for maybe five miles and really helped it go by quickly. A mile before reaching camp, I passed the 100-mile marker! So exciting. 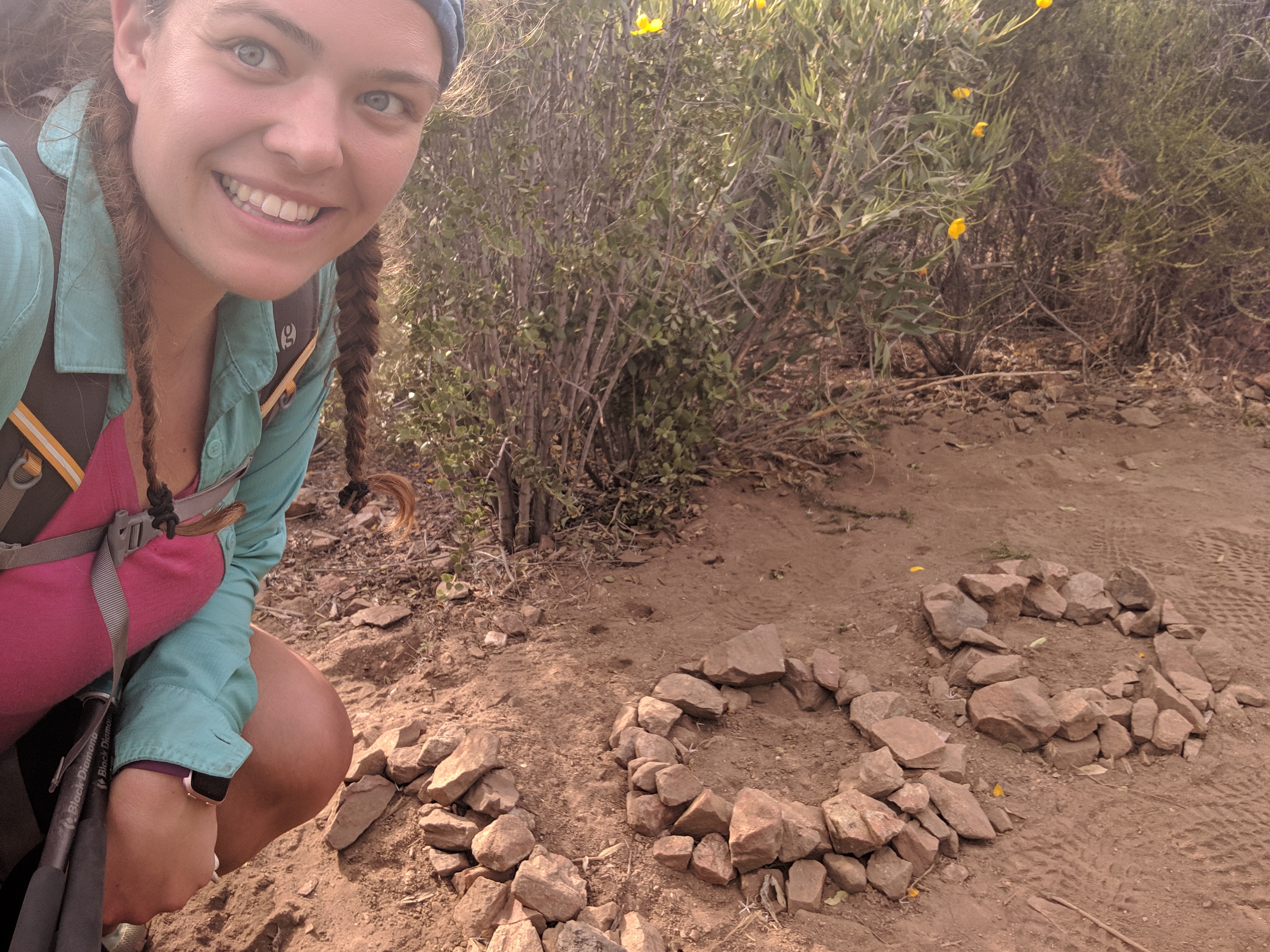 At camp there was trail magic of beer and pretzels left by a hiker we passed going south. She intends to thru-hike next yet. We all appreciated it. There were a lot of hikers we hadn’t met before at this site, which was fun. With more rain coming tomorrow, we planned to get up early and hike the miles to Warner Springs as quickly as possible.

We made it into Warner Springs at 8:30 after hiking 8.4 miles. Getting a room was a quick decision so we could do real laundry and showers (as opposed to hand washing and bucket showers at the resource center). While we waited for check-in, we hung out at the restaurant all morning. It was just nice to be out of the rain. I had new camp shoes sent to Warner Springs and it was perfect timing to get them as my socks and shoes were soaked. I was so happy for them.

After showering (we ran out of hot water, unfortunately) and laundry, it was time to pop my blister. I was very excited for this moment, and so was everyone hiking around me. Videos were taken, and it was quite the production. I decided to use the method where you thread the blister and leave the thread in your skin to drain it slowly. It wasn’t quite as theatrical as we imagined; it didn’t squirt everywhere. It did all drain though and my foot looked much better.

Following the blister popping, we went to dinner at the restaurant again. Next stop was the gas station for some beer and wine for SOS. Another hiker Papaya was sharing our room and Villnis (now Fig Bar) and Dory were staying in the next room over with another hiker, Cold Fry. We all drank and played some fun card games, and eventually “Never Have I Ever” and “Bitch if you Haven’t” (everyone got confused bouncing between games). Another fun town night.

So far so good. Week one has been a lot of fun and I’m so glad to have found some great people to be hiking around. The rain and cold has definitely been a bummer, and there’s more to continue. Hopefully it’ll pass soon. One thing I’m trying to do is enjoy every moment out here, even the bad ones. I didn’t always do that on the AT, and when I was home I missed even the bad times. Here’s to staying optimistic!