We got a ride by Raven up the winy road to the trail. Alltogether we were 13 people starting north or south from the Hart’s pass. Five of us were going to take the official PCT, nowadays aka “The high route” to the Canadian border. Two of the people were so fast they were out of sight after the beginning. Me, Mustardsandwich and Snowman walked together. 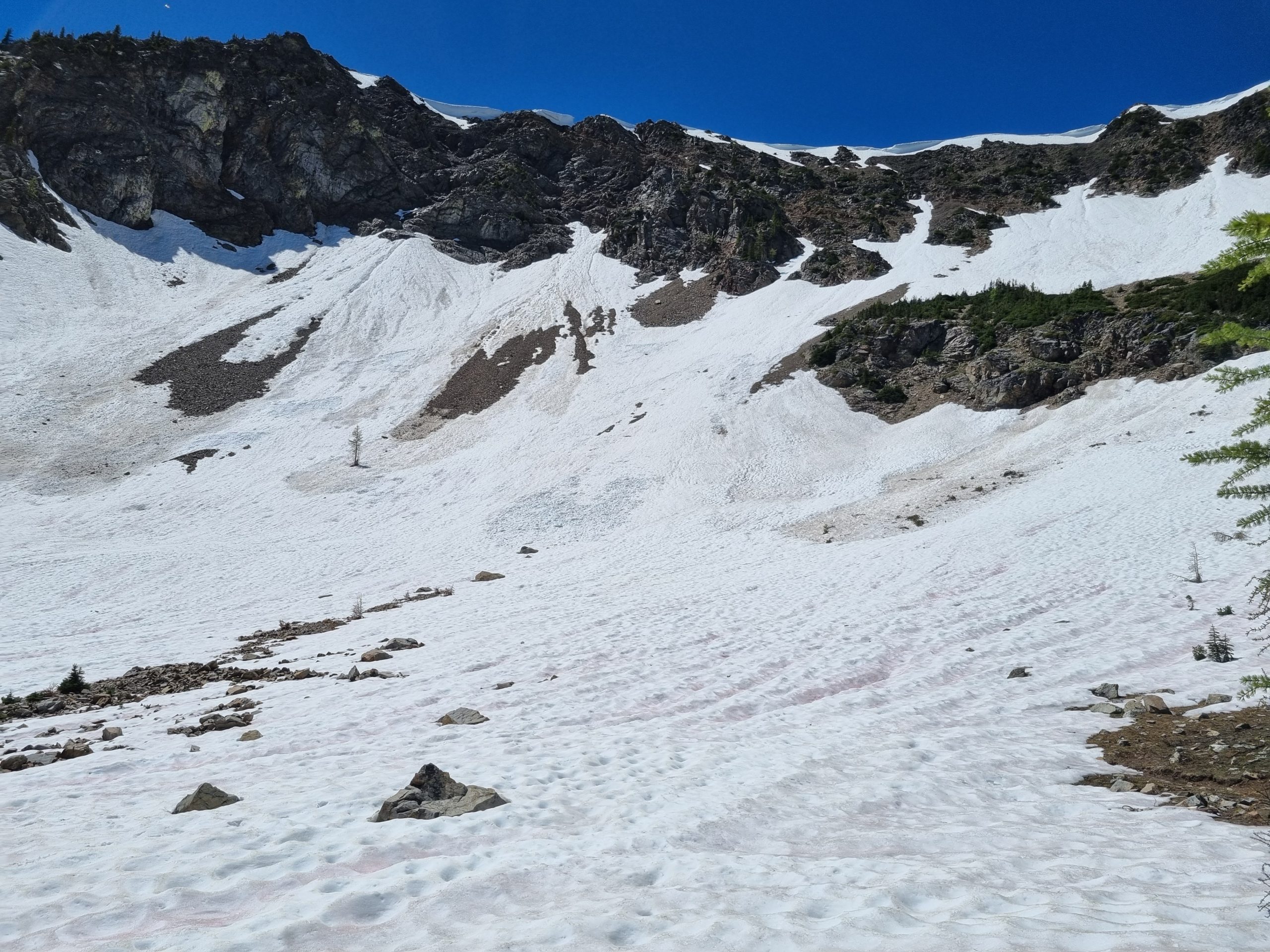 The trail was snowy from the start and the snow got deeper by Buffalo pass. Before Windy pass we lost the trail and tried to make a shortcut. We ended up on a very steep mountainside and Snowman disappeared, accidently summiting an unnecessary peak. We all ended up self-arresting – and that was just four hours from the beginning of the hike!

Coming down the snow had melted more, but we had to posthole a lot. We met an exhausted Coffeemaster who said Calculator is waiting by Holman creek trail. We made it there and camped in a middle of a forest.

This day included some shitscary snowtraverses on very exposed mountainsides and a couple of times of self-arresting. The famous Rock pass is where most people have turned back, and I felt like doing that too seeing the impossible looking edge of the mountain. With Snowman making footsteps we took the snowy “low route” below the official switchbacks, and it was the most scary time of my life. I had tied the iceaxe to my wrist with a rope, had I dropped the axe I could have ended up being dead. After that we crossed some sketchy switchbacks where the snow had melted revealing rockslides that made walking the path extremely scary. I had to self-arrest in the middle of that kind of a sketchy place and for a moment I thought: “That was it.” After that the snow continued all the way to Woody pass and we had to walk over a cornice. Then we had to cross a shit-scary ridgeline and another scary long traverse. We were just counting our steps: left, right, left, right. Never have I been so focused in my life. I decided I would not return the same route back to Hart’s pass since it was too dangerous.

We arrived to the highest point of Washington and the altitude (7111 feet) made me already catch my breath like an old granny. Mustardsandwich and Snowman were less out of breath and headed on before me. I walked down through wet and overgrown paths, climbing over endless fallen trees and I decided I am not eager to walk over 30 miles over blowdowns either. 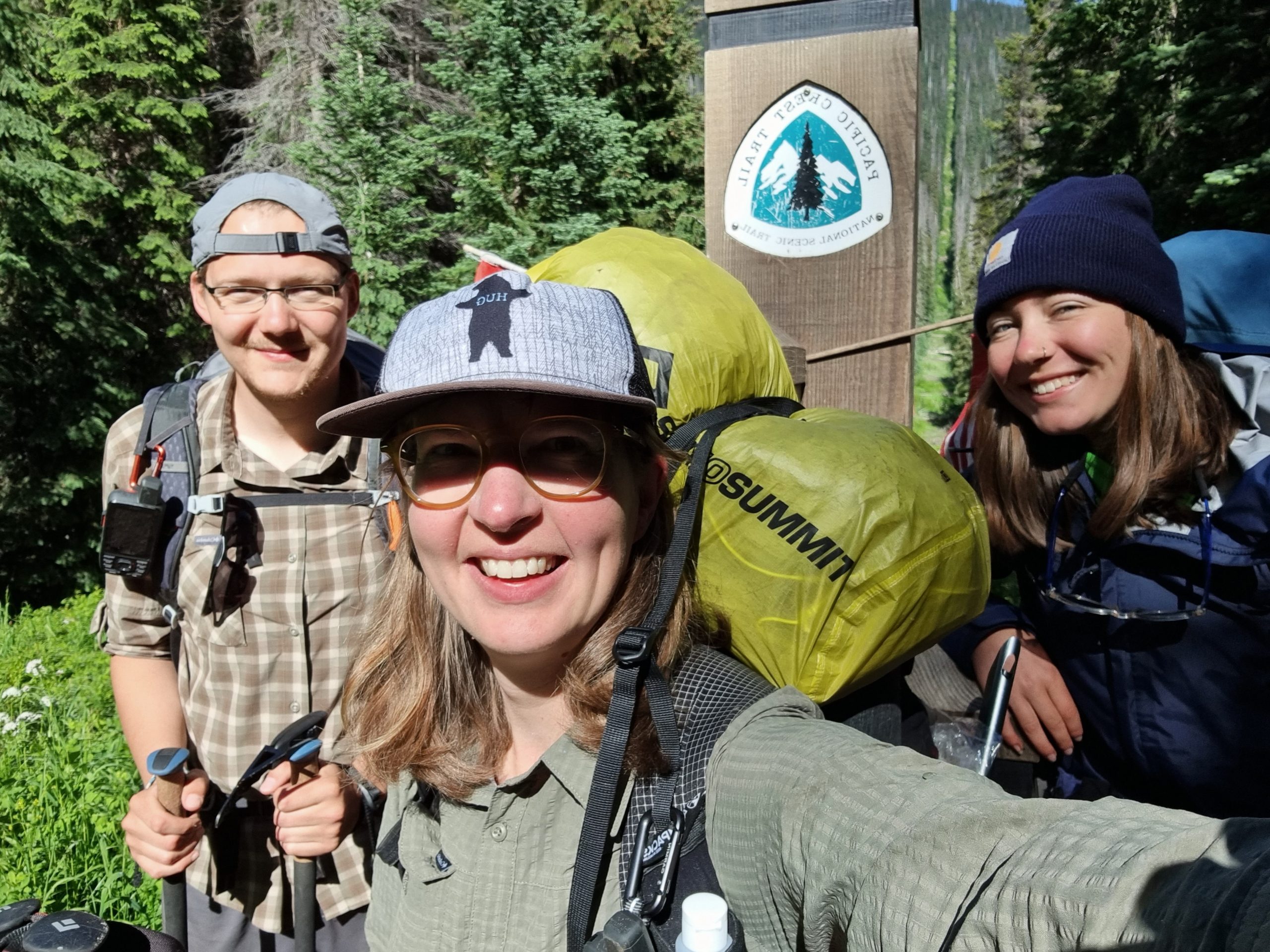 At the border I met my friends and we set up our tents right at the border. I was sleeping with my feet in Canada and head in the USA.

After sleeping a night I decided to head back south via PCT anyway. As we already had walked this way we a least knew what to expect. Again I was out of breath like an asthmatic 96-year old on Mt. Everest and the young ones were way ahead of me. I had no idea I could get so influenced by the altitude at only 6000 feet. Again we made a scary crossing of an exposed traverse. We were planning to make a shorter day but found no snowfree campsites before Woody pass. Snowman went to investigate a snowfree island and said there were places for tents there. When coming down the mountain I was too relaxed about the snow and slipped gliding down a long way before catching my iceaxe and being able to stop the glide. I continued to glide past a melted spot and ripped my pants. I thought I had also injured my fingers but it turned out they were just frozen from panicgripping the snow. Fortunately I made it with a few scratches. It was after all the most epic campsite ever, the view will be hard to top. Ironically the mountains beside it were called “Three fools peak”.

We started the day with the lovely death anxiety provided by Rock pass. It was equally scary going up the pass as it had been coming down. As many parts of PCT SoBo this year it was more alpine climbing than hiking. Coming to the top of the pass we almost cried of happiness – we had not died!

We were doing a lot of postholing but also a lot of the snow we saw two days before had melted. We saw amazing flowers and a crazy wood grouse. We had planned to take three days to the Hart’s pass but when we had five miles left we decided to head all the way to Harts pass – after all we had left our celebratory beers in the bear box there and boy were we thirsty.

When finally limping to where we had started we met with Coffeemaster who had made a campfire and gave us fresh pepper. I got my Hart’s pass beer from the bearbox where we had also left food for the coming stretch to Stehekin, although we all had too much food over from this stretch as it had only taken us four days. 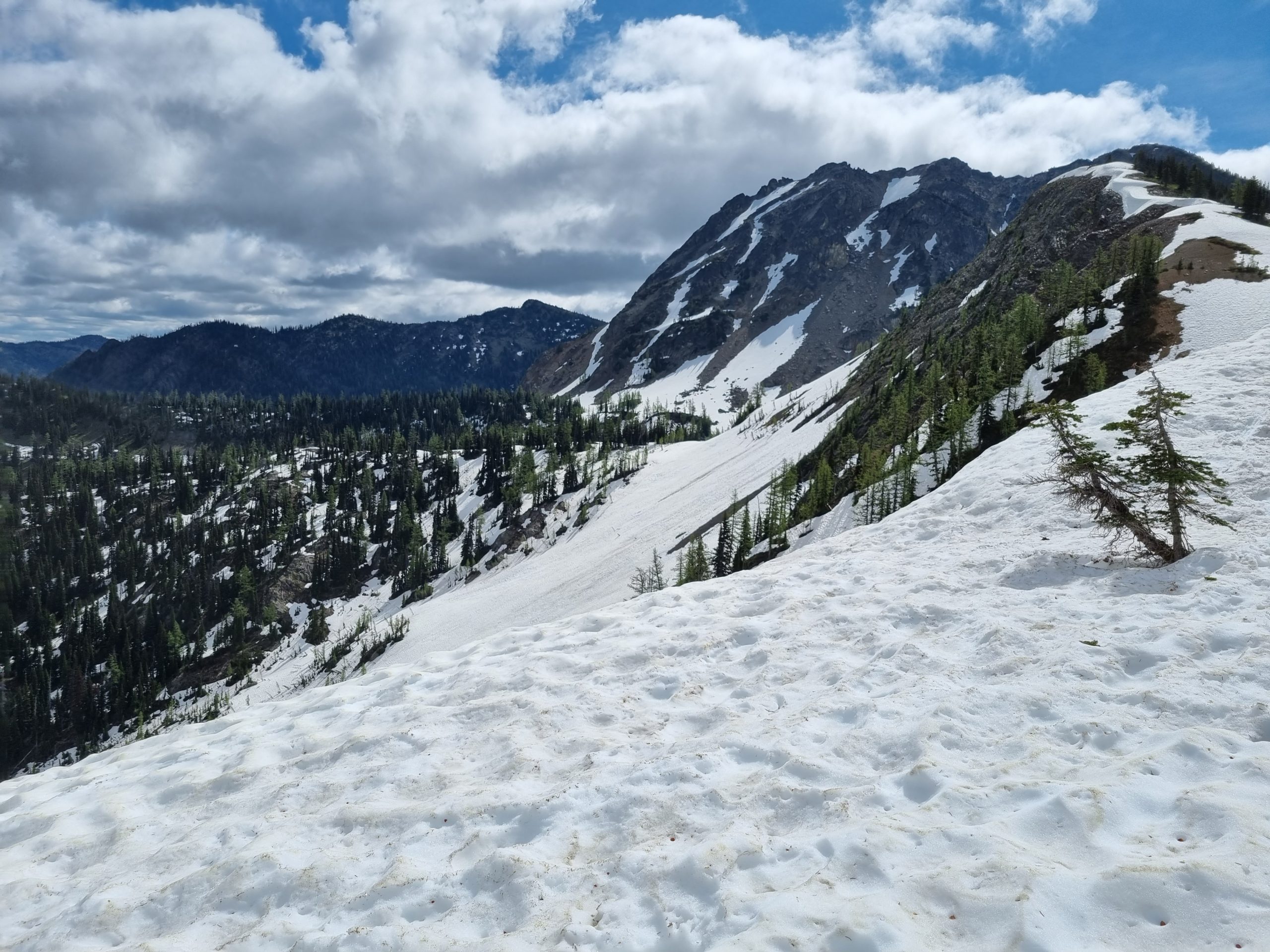 We had a breakfast with Coffeemaster who gave us a speech of not to pushing too hard on our bodies. She is a fysiotherapist and was worried by our unnatural walkingstyles.

We started the day late intending to do a nero. Everybody was pretty exhausted. On the first 5 miles the snow had melted and it was very hot in the forest burn area. After that there was a lot of snow and we crossed one of the most dangerous exposed passes. We were supposed to walk only 10 miles but the planned campplace was covered in snow. We continued exhausted 2 more miles and found an awesome place by a creek where I had a private campground for my tent behind giant boulders. We had dinner on the bridge and I washed my discusting clothes and myself a bit with some soap from Mustardsandwich.

I woke up when a bear was making noise behind my tent. I screamed: “Hey bear!” and was mostly pissed it woke me up so early.

We had a breakfast on the bridge. Then we walked through dense bushes and over some flooding streams. Soon started the worst climb ever, snowy postholing in a forest and climbing over fallen trees, while it was very hot. The total climb of the day was over 3500 feet. A crazy guy just ran past us in the snow. I had pain in my shins and I wanted to do a nero. Most of the people who had made it so far seemed to be athletic young guys doing 30 mile days.

We had lunch at Methow pass and came down very hot switchbacks. I washed my hair in a stream and as I thought the worst snow areas were behind us I saw Mustardsandwich and Snowman waiting for me behind the worst slushy exposed snow trail ever. Had I slipped I would have fallen into a deep hole above a creek that was flooding below the snow. Left, right, left, right, while not thinking about the possible consequences of a fall.

Since I was completely done we camped early with an amazing view over Cutthroat pass and a hell of mosquitoes. 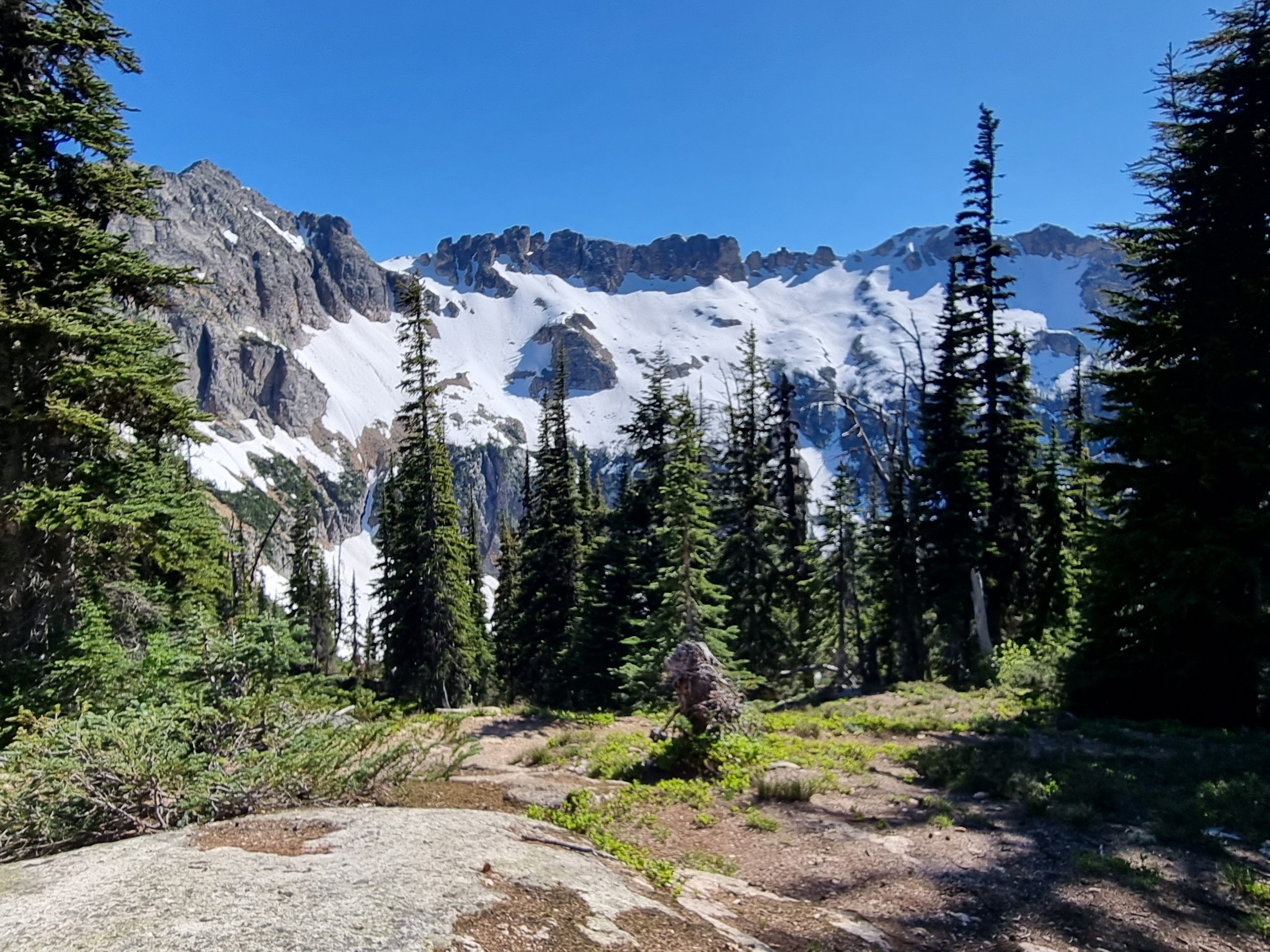 I woke up with crazy condensation in my tent. My legs were showing symptomps of shin splits. We walked the crazy snowy Cutthroat peak and it was maybe the longest exposed snow path of the whole trail. I slipped on a dangerously slushy very steep slope, but managed somehow to selfarrest after gliding several meters down. Mustardsandwich and Snowman just wondered where I had disappeared from the trail. With this action I had deserved the emergency whiskey I had carried with me. After coming down and to Rainy pass the path got easier.

As I was again behind the younger hikers I was afraid of passing a lodge that had turned to a side, and waited for half an hour until I saw a couple with a dog pass it. I guess I could do it if the dog could. I walked alone the rest of the day through forest and meadows with many streams and some fresh bear pooo. We slept at a campground that had potential bear activity and a funny toilet. Two other hikers camped there as well. 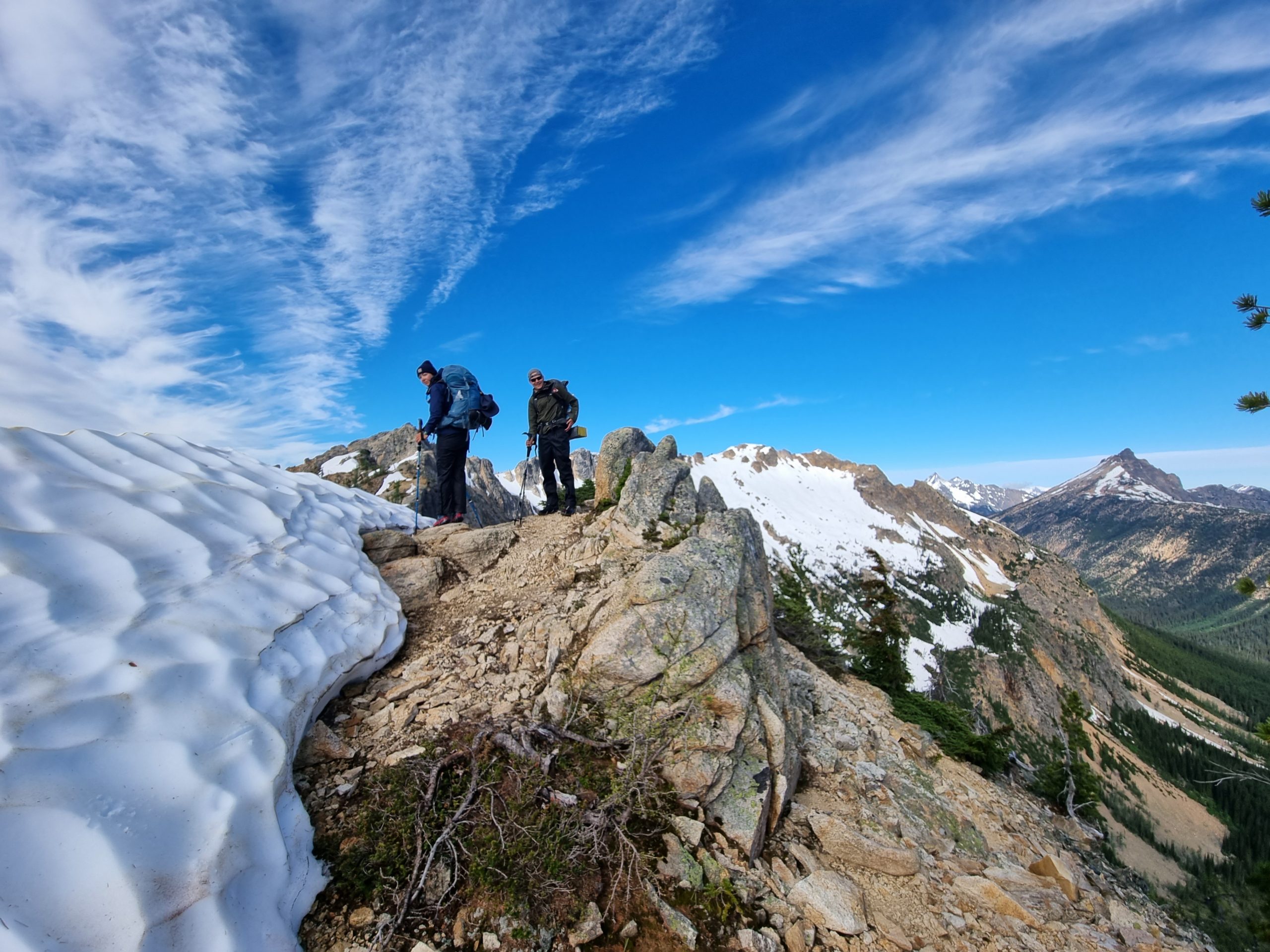 We got up unusually early to catch a bus to Stehekin that day. Stehekin has a famous bakery and that is all a hungry hiker can think about. I was limping with my aching shin while all four other hikers who had camped together passed me. There was one scary bridgecrossing, otherwise it was the first day without using microspikes on the trail or having a death anxiety. A pleasurable hike but there were  a lot of mosquitoes and the trail had a lot of elevation change as always. At some point one of the hikers passed me and told me that the ferry goes 12.30 p.m., not 2 p.m. I looked at my watch and decided I had no time for breaks if I was going to make it. I even peed with my backpack on to save time.

I had almost given up the hope of catching the bus but decided to give it all I could, and I finally to the amazement of my friends I made it exactly two minutes before the bus arrived. I was proposed the trailname Hustler. We got a free ride for those 2 miles and spent the last of the evening washing laundry, using an absurd coin operated shower that really didn’t work dressed in our rain clothes and drinking wine from our waterbottles on the porche of the restaurant. 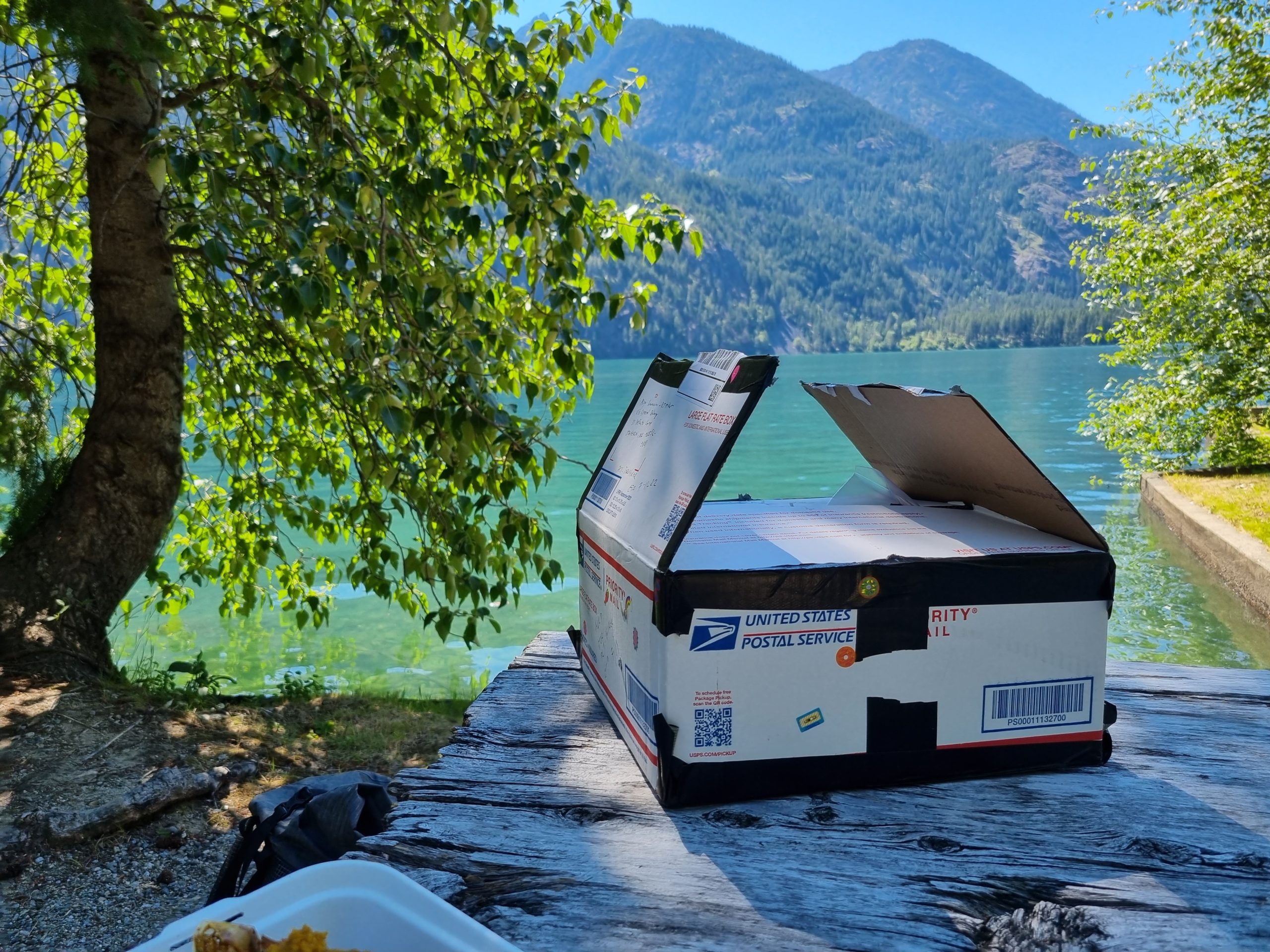