I’m into week two of the Pacific Crest Trail and all Pre-Hike goals have fallen to the wayside. Healthy eating? Abandoned in favor of gluttony and calories. I haven’t had a “superfood juice” since day three. Daily writing? Lost in a haze of siestas and ogling views and sleeping before my head hits the pillow. Vitamins? Left in a hiker box in Idyllwild. I had high hopes for Health and Harmony but at the end of the day, walking all day is time-consuming and candy is delicious.

The daily post is obviously not sustainable, especially since – in reality – WEEKS have passed since I started the trail. I was trying to let time elapse before posting to prevent lunatics from finding me but I guess I waited a little too long. I debated summing up the desert in a heatstroke paragraph but decided it merited a bit more than that.

Here are a few snippets from every day. Think of this like a poem, but worse.

When I got into Idyllwild, I hadn’t showered or done laundry in 10 days. This, folks, was past my edge. I was uncomfortable to the point of emotional distress. This may sound bougie but after a week and a half of desert sweating, plus my time of the month, I was repulsive, both sweaty and cracked, disgusted by myself. The coin showers at the San Jacinto Ranger Station Campground felt like the best ten minutes of my life – and I’ve had a lot of solid ten minute chunks of existence #butreally #dobetterboys.

IDYLLWILD. WAS. GLORIOUS. It’s a walkable touristy adorable mountain trail town. Coffee! Bagged salads! I spent most of the afternoon wandering in and out of the grocery store and chatting on the phone in the town square. I got hit on in said town square twice and asked for my number (by a teenager who scurried away when I told him my age) in the grocery store once, affirming my belief that looks, or even cleanliness, genuinely do not matter and as long as it has skin and a pulse, straight dudes will shoot their shit. Glorious? Actually, horrified. Trail, please!

I decided to take the alternate route and hike – or should say…summit?! The Drama! – to San Jacinto. Doing this means “skipping” six-ish miles of the PCT. As a lowlander, I was dying to get about 10,000 feet; San Jacinto was a no brainer. I assumed everyone would do it. It’s cool! It’s high! It’s a mountain! Because it’s there, joder!

Yet when I got to the junction, I realized many people weren’t going up. “There’s a tram from Palm Springs,” they sneered. “There’ll be day hikers up there.” Oh! God forbid! Local people hiking in their own backyard – the audacity! Aspiring thru-hikers asked if I was going to hike back down to the junction to get the PCT miles that I’d have “missed.” I threw up in my mouth at this suggestion a) because this is all arbitrary and b) because I’m still hiking, not taking a charter flight over a section of trail.

My favorite reason that my comrades-in-cuben-fiber didn’t do San Jacinto, though, was that it was deemed not worth it. Since the PCT is on the West Coast, there are a fair number of people from this side of the country. And let me tell you! They need no invitation to talk trash about the puny mountains we have east of the Mississippi. We’ve never seen views, those aren’t real mountains. A 10K foot mountain is nothing. The views are whatever. We’ll be higher in the Sierras.

The views, for the record, were not whatever. 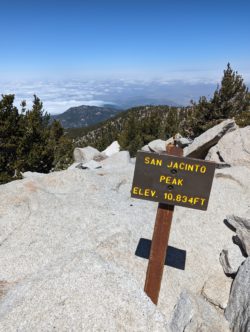