After two weeks of wilderness I’m back to civilization in Independence, CA. The trail and environment has changed drastically since leaving Tehachapi. Even though the PCT north of Tehachapi is not considered desert it sure felt like it. Temperatures reached close to 100 each day for the 140 mile stretch to Kennedy Meadows. The trail was extremely exposed to the elements and natural water sources were practically non existent. If it wasn’t for the amazing people that left huge water caches this section would be practically unpassable this time of year.  Needless to say I hiked this section as fast as possible to get to the cooler High Sierras and the change in landscape has been exhilarating.  Within the course of a week I went from being scorched and dehydrated in the desert to dealing with rain/snow/hail and freezing at night.  What an experience!

Here’s a quick recap of my last two days in the Sierras. After three perfect days weather wise, with barely a cloud in the sky I woke up to light rain on my tent. I wavered with staying put in my tent as this was my day to climb Mt Whitney. Thankfully the weather improved by 9:30 and I was on my way.  This climb was unique to me as all high elevation mountain climbing I’ve done in the past involved driving to the trail head at dawn, checking the weather and trail conditions and then starting my ascent. This time, being that I was starting from the Sierra Wilderness, there was no weather info or cell service to provide route info and it was essentially based on your judgement as to whether to attempt a climb. With the eerie weather in mind and the fact that I was able to leave some of my things behind I hit the trail at a quick pace.  After passing a few alpine lakes the trail started seriously climbing along long switchbacks. As I climbed up I ran into hikers who had summited already with stories of white out conditions, so I was hopeful that things would improve.  For the most part the trail was clear and the views were endless. Once I reached the Whitney portal trail junction at 13,500 feet I could make out the route to the summit and it appeared to be on steep snow.  As I got closer I was soon walking on snow but with the summit so close I tried not to focus on my odds of sliding off the mountain.  By 1 in the afternoon I made it the summit of Mt Whitney at 14,500 feet, the highest point in the US minus Alaska. After a few cloudy pictures and rest in the summit shelter I was making quick work of the decent, this time dealing with the steep snow while a snow/hail mix was coming down. The main picture for this post is the snowy section I was describing on Mt Whitney. Imagine this in whiteout conditions, while decending in shorts and trail running shoes!

Once back to my tent in Crabtree Meadows, another storm rolled in bringing hail and light rain. After a quick nap I decided to get a few more miles in once the weather cleared up.  That night I set my tent up near a meadow as dark clouds again rolled in.  Around 10 pm I was awoken to thunder and pea size hail on my tent which continued relentlessly for an hour. As the temps dropped the hail changed to snow and before long my tent was slowly collapsing on me from the weight of the snow. Waking to the tent fabric on my face became routine, as all my gear slowly became wet. One of the disadvantages to having a goose down sleeping bag is that it loses it’s insulating properties if it gets wet and as expected it smells like a wet goose when soaked.  My day came to a close with thoughts of how quick things and your mindset can change. One minute I’m on top of California and shortly after I’m shivering in a cold tent smelling like a goose, what a day…

Fast forward to the next morning, I attempt to pack up and dry all my gear out which I quickly learn is futile.  With no luck drying my tent and goose bag I knew that during the day I’d have to stop to dry my gear if I want to sleep at all that night. Also on my mind was that the trail was going over Forester Pass at 13k feet the highest point on the PCT. Usually I would be excited for high elevation hiking but the fact that it had just snowed at lower elevations had me worried that the trail may be covered in deep snow. I set out from camp with soaked gear and walked the prestine trail taking time to photograph the mountains covered in fresh snow, I felt like I was deep in the Alaskan wild.

The trail gradually climbed up to Forester Pass and as it did the trail became fully snow covered. With no one in sight and a storm approaching from the south I pushed towards the pass following the footprints of hikers who passed through earlier in the day.  Usually on the PCT you can see in the distance where the trail goes but with snow covering the mountain face I was searching for a long time until I saw three hikers coming towards me heading down the pass. As they passed me all they said was “Good Luck”, that’s when reality set in and I knew what I was in for.  What followed was the most thrilling hike I’ve ever done with stunning scenery and nerve racking dropoffs.

Once up and over the pass the trail descended for 7 gradual miles. But with the lower elevation came intense stream fords and light snow changing over to rain. With the sun going down I was essentially back to where I started the day elevation wise but with precipitation all day had no time to dry my gear. I was getting worried about lack of sleep and being super cold again so I devised a plan to hike 9 more miles to get out of the mountains and close to town.  Only issue with this plan was that it involved going over another snowy pass and I would be doing this as night settled in. I determined this was the best choice in order to stay warm so after a short break I was again climbing into the snow.  I arrived at the trailhead/parking lot at 10 pm where I set up my wet tent and shivvered throught the night thinking only of the comforts of town that awaited. Thankfully the following morning a car came down the remote road and drove me into town, bringing to an end one epic adventure on the PCT. The best part is that I still have 200 more miles in the High Sierra and will soon be in Yosemite National Park! 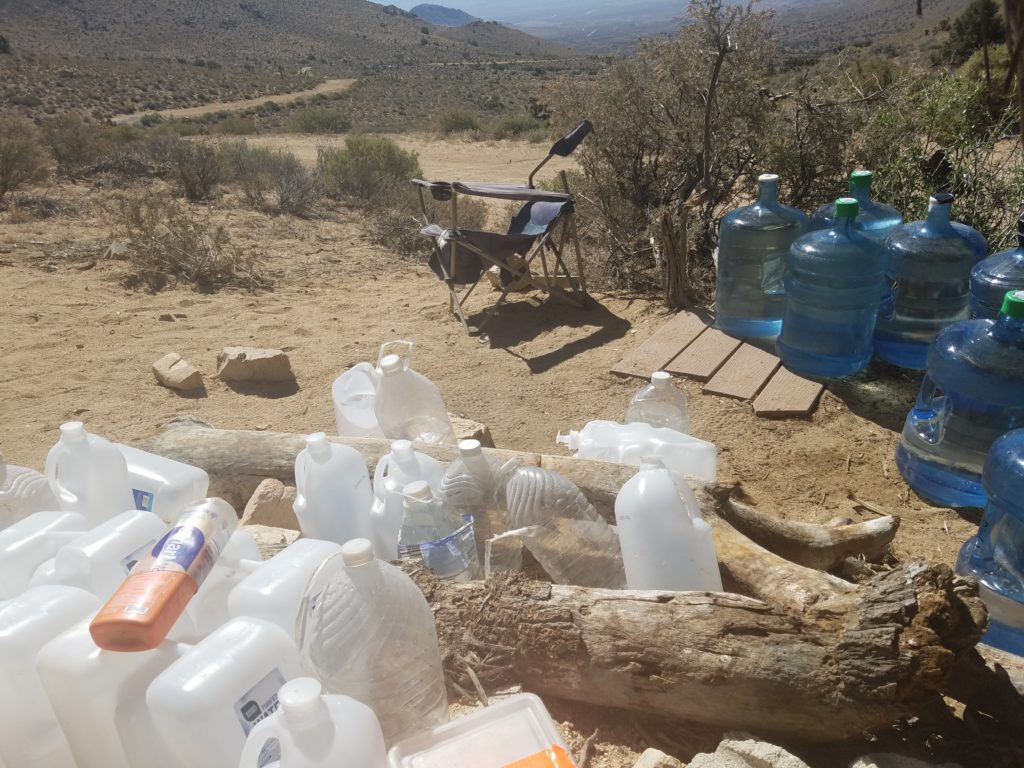 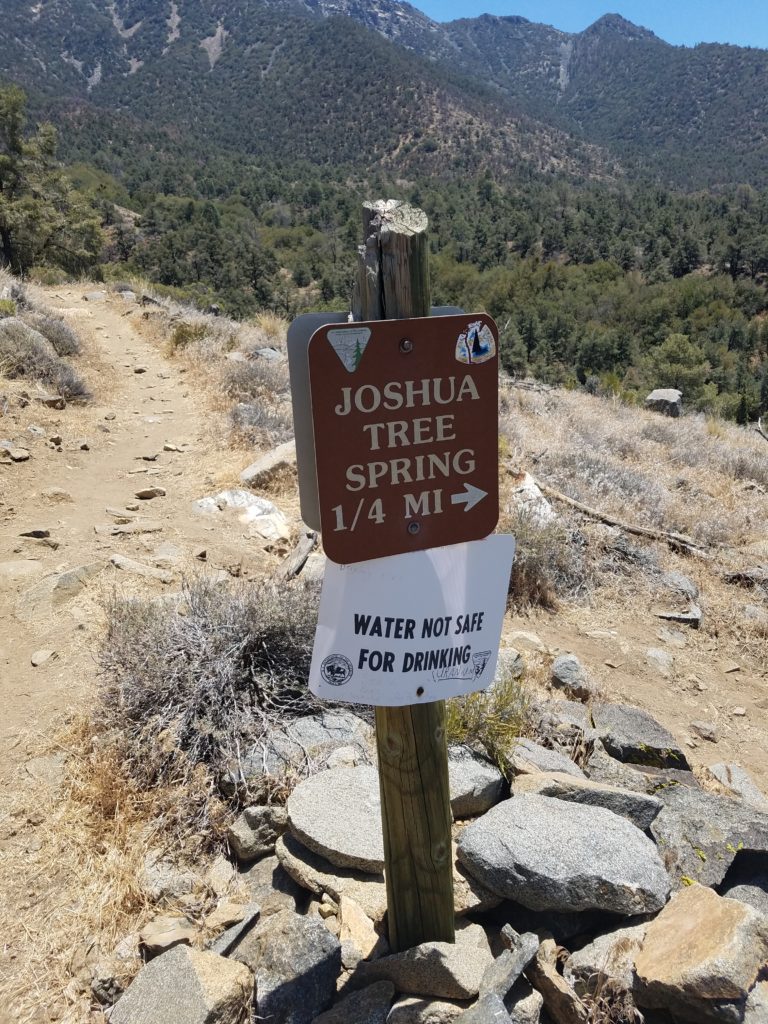 As water became more plentiful on the trail, it just happened to be polluted… with uranium… 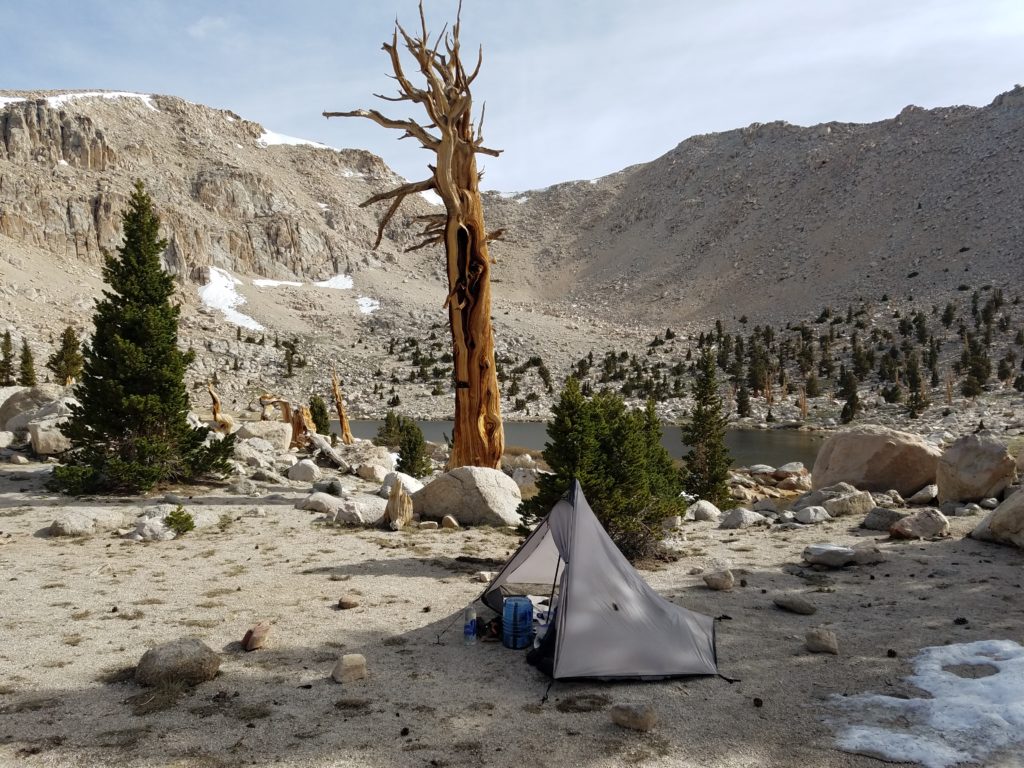 Best campsite on the trail so far! 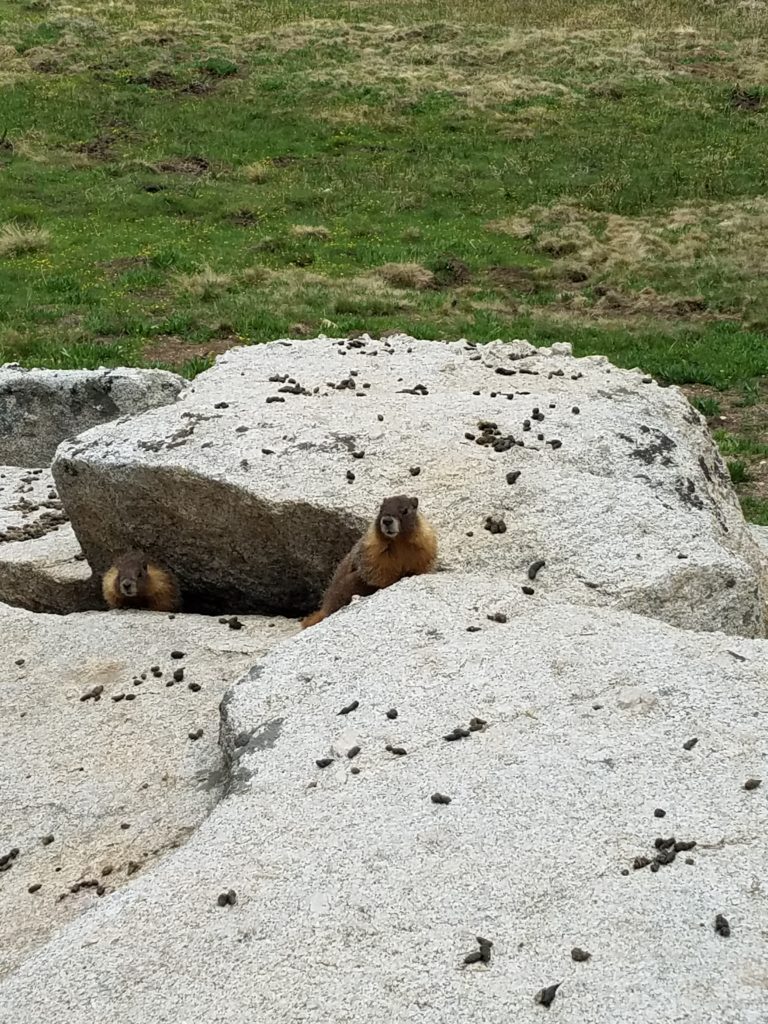 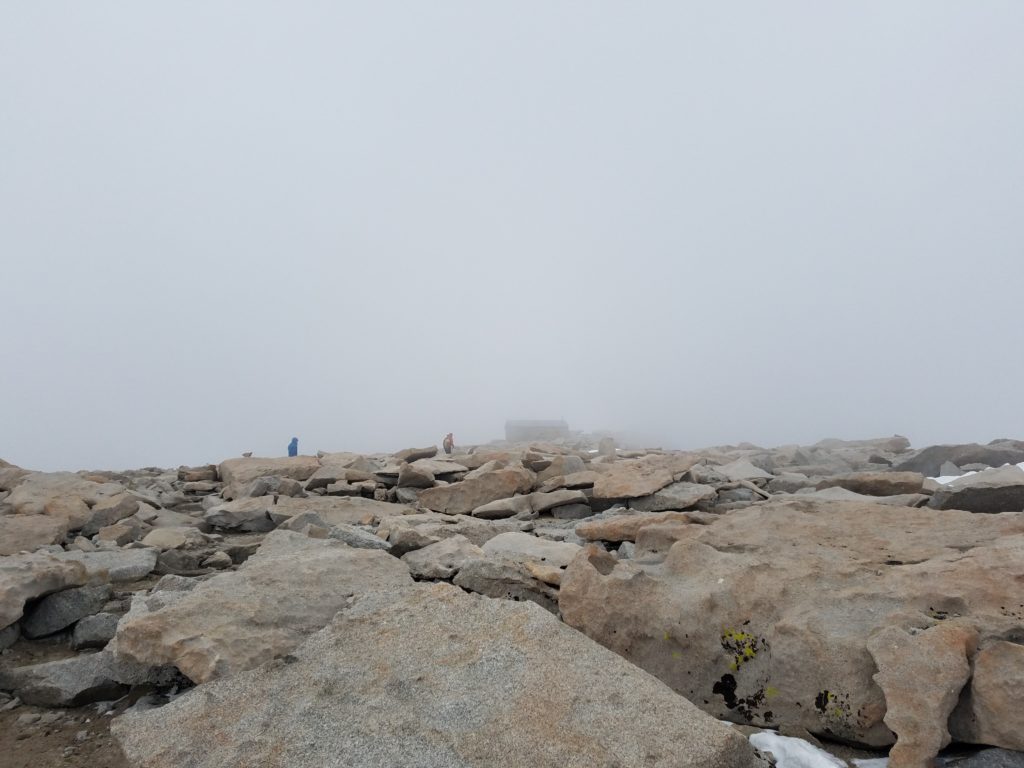 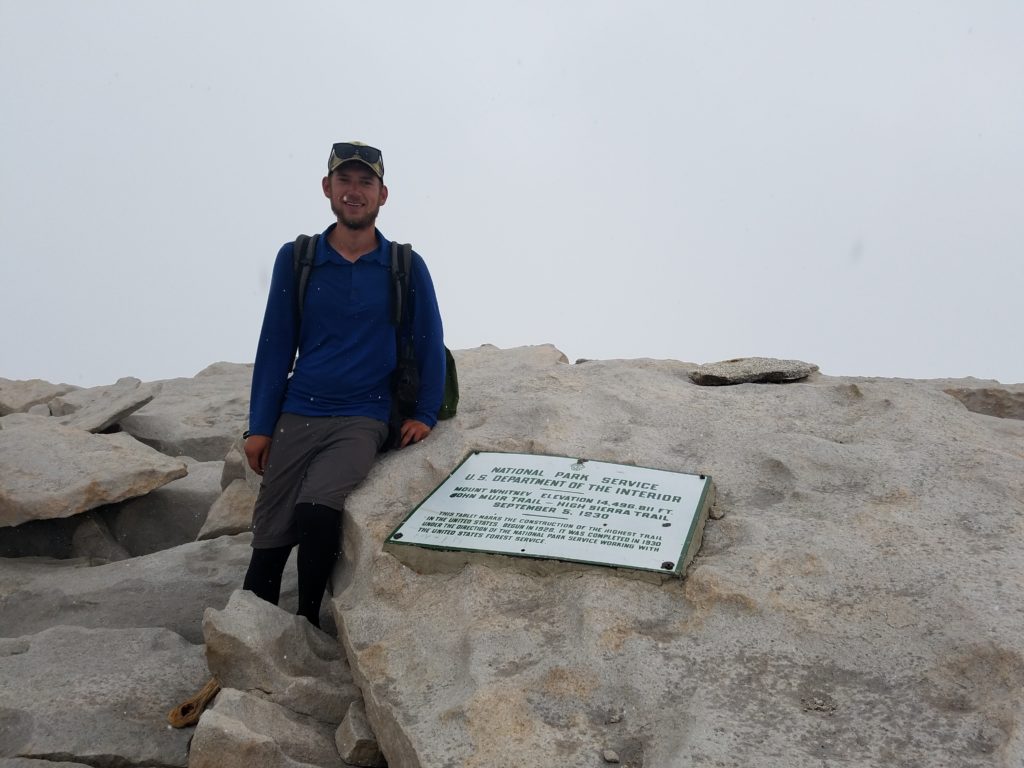 At the summit of Mt Whitney 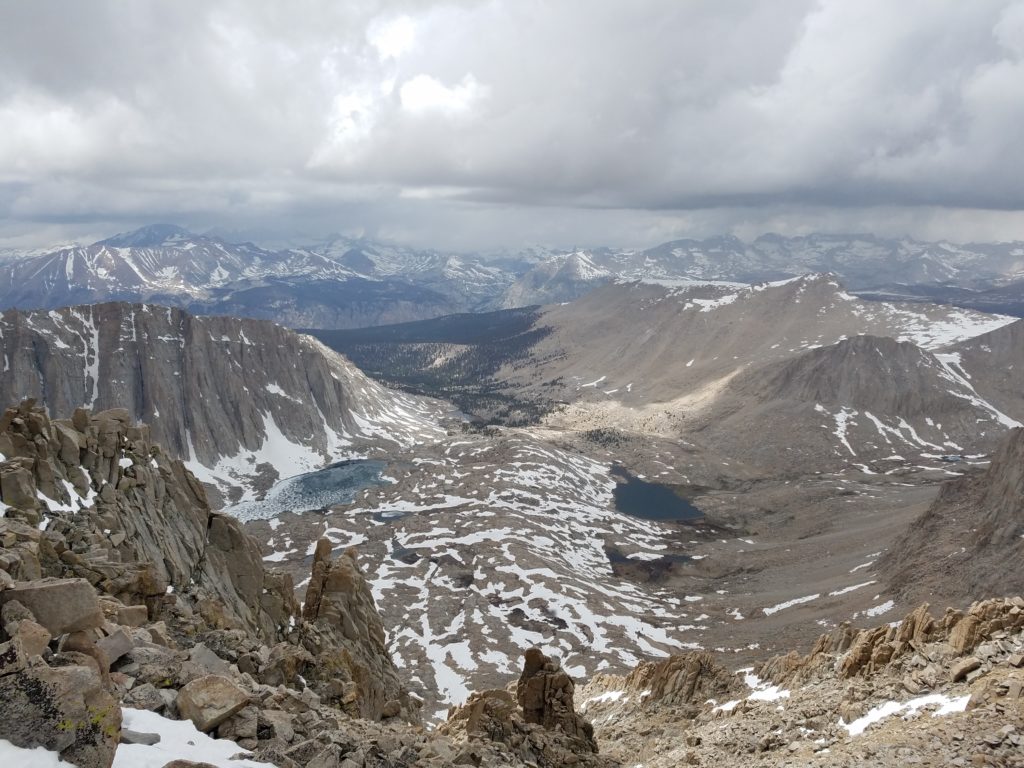 Looking down from the climb 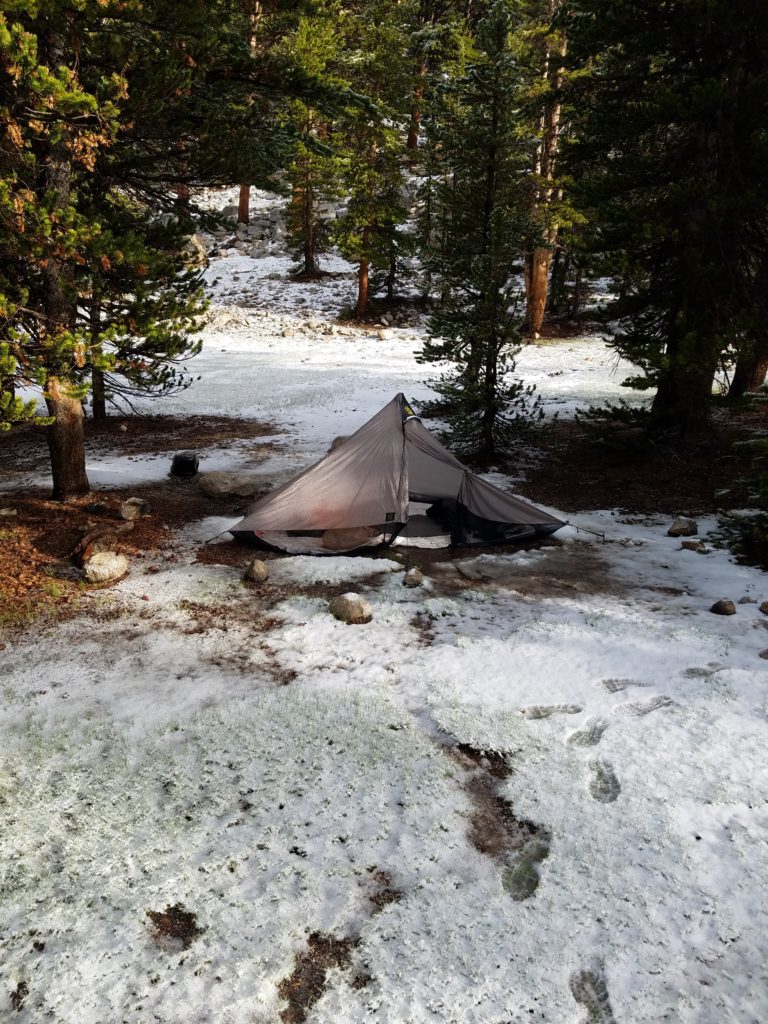 The night after Mt Whitney, a mix of snow and hail. My tent somehow survived the night. 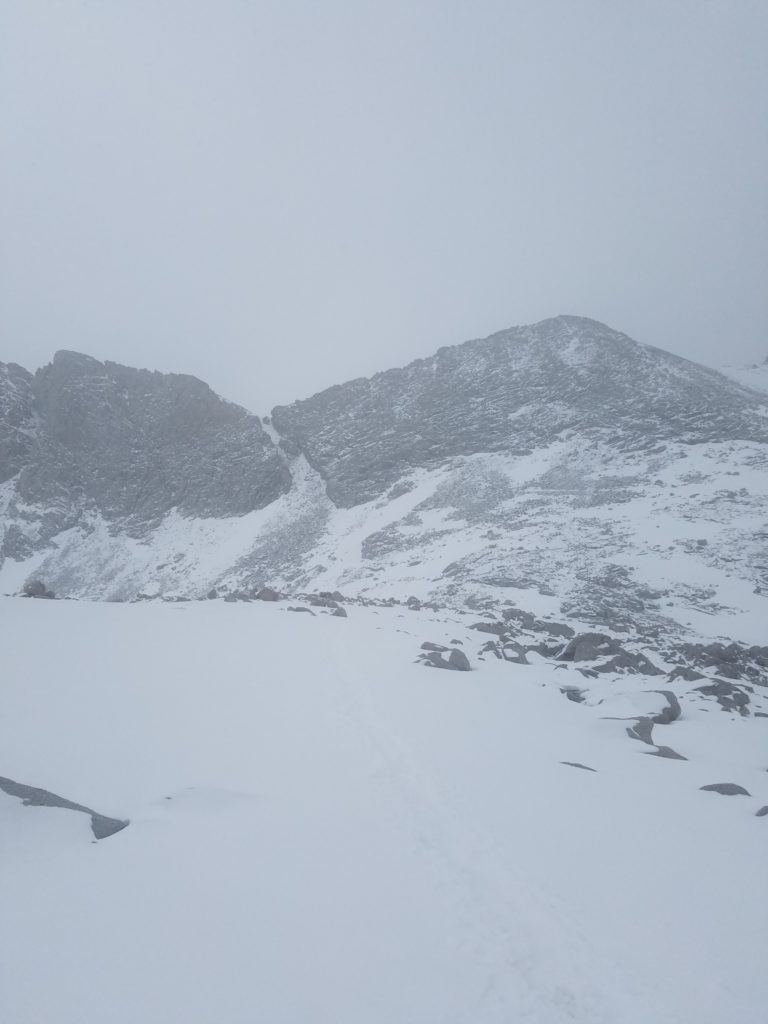 The start of the Forester Pass climb, the trail passes through the center notch of the mountains in the picture. (Forester pass Elev. 13200 ft) 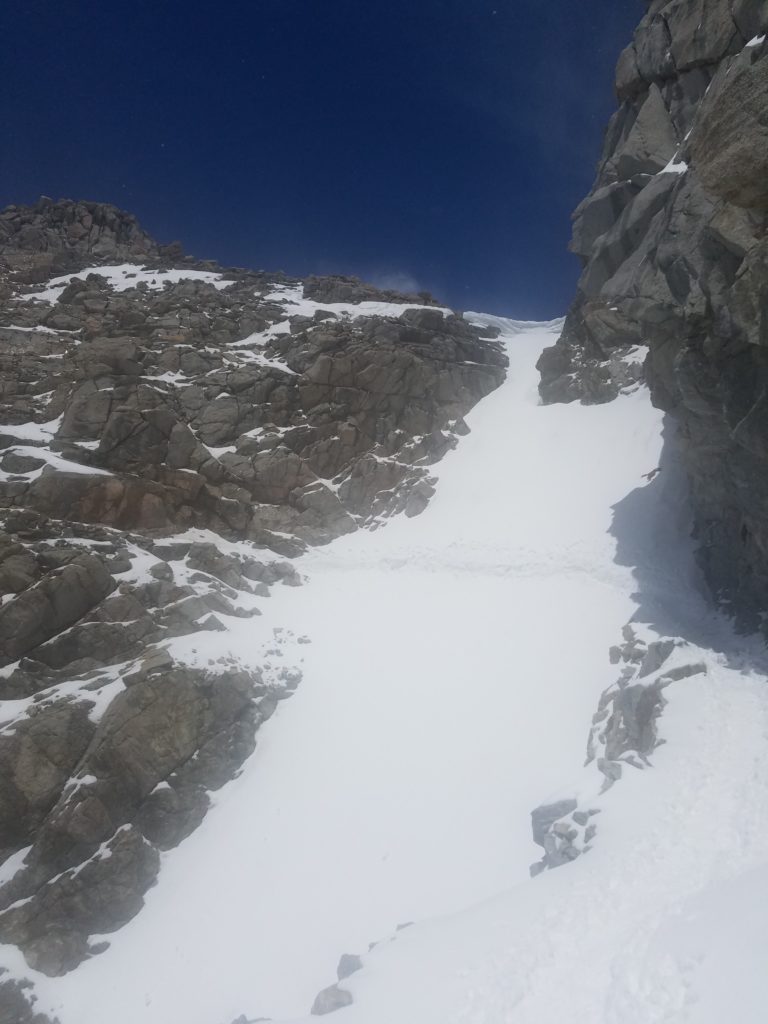 Up close view of the pass, the trail was full snow in this steep section 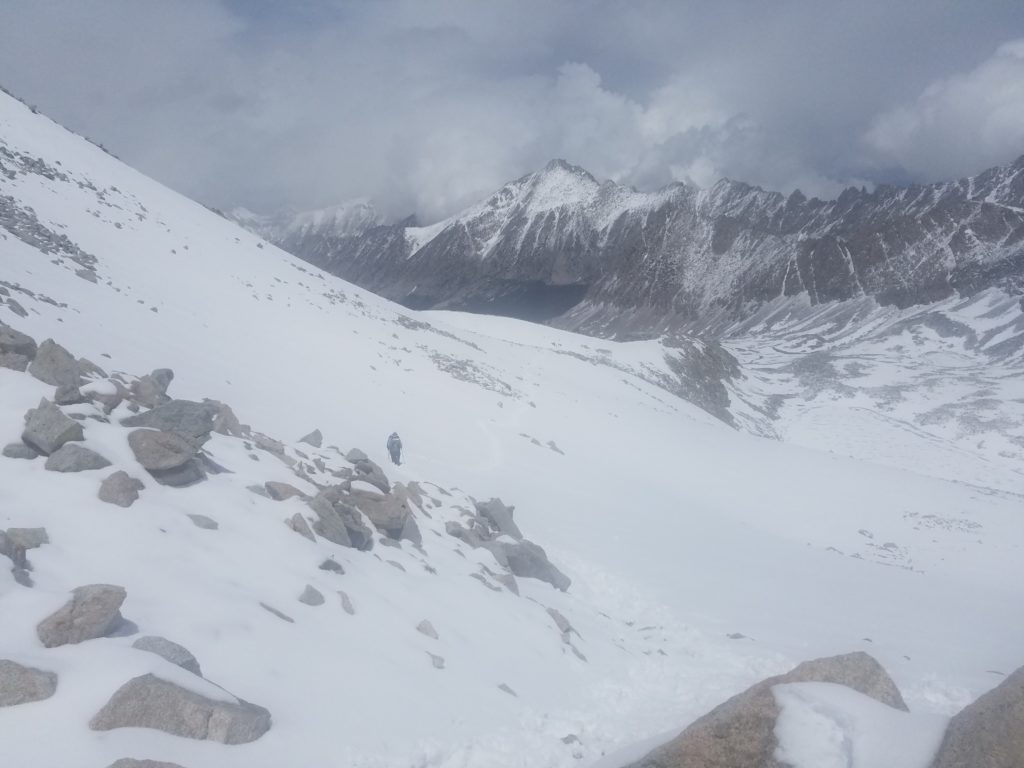 Starting the decent from Forester on the much snowier north side. 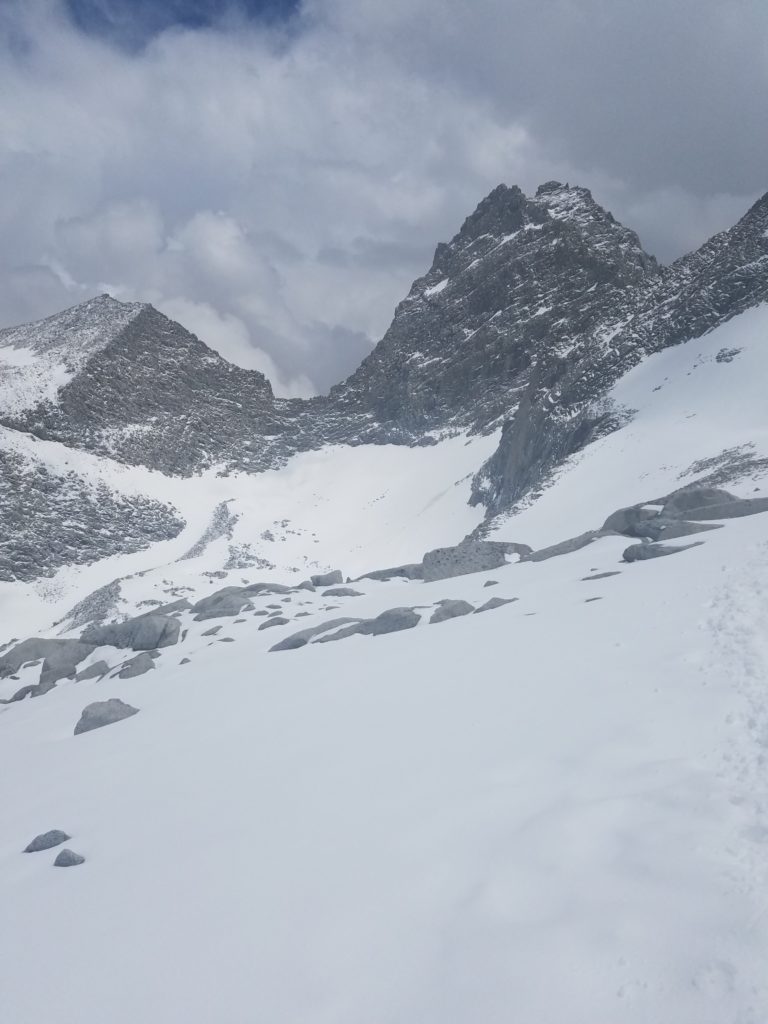 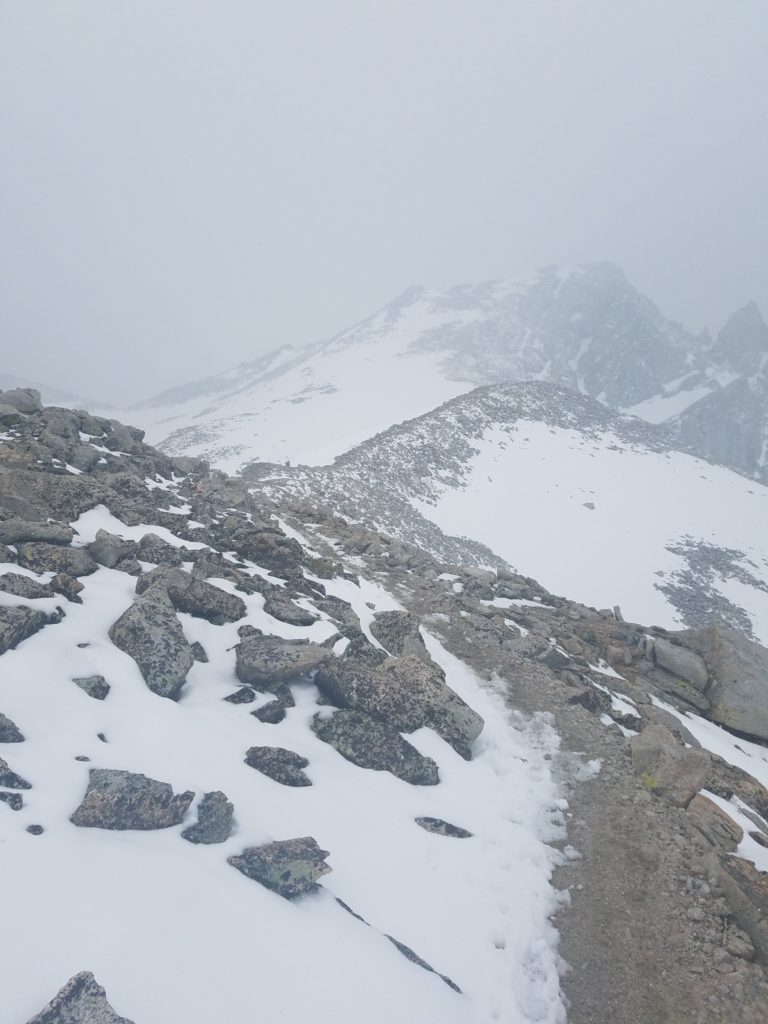 Continuing down Forester Pass as the snow rolled in 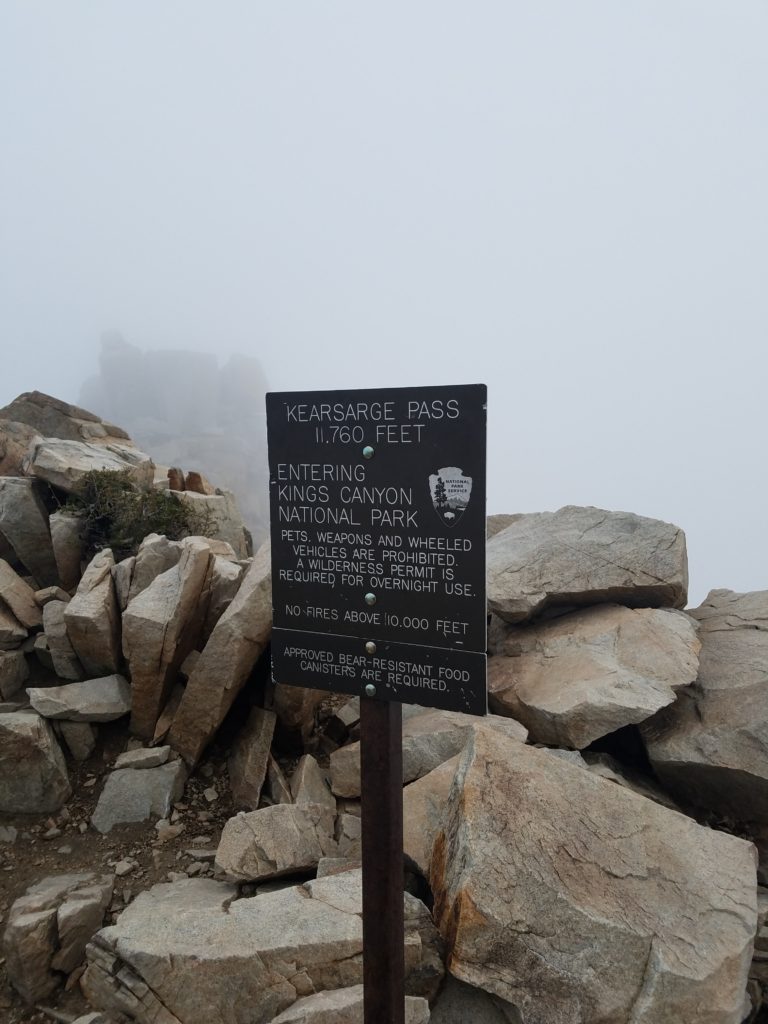 Kearsarge Pass, a 7.5 mile side trail to get to civilization 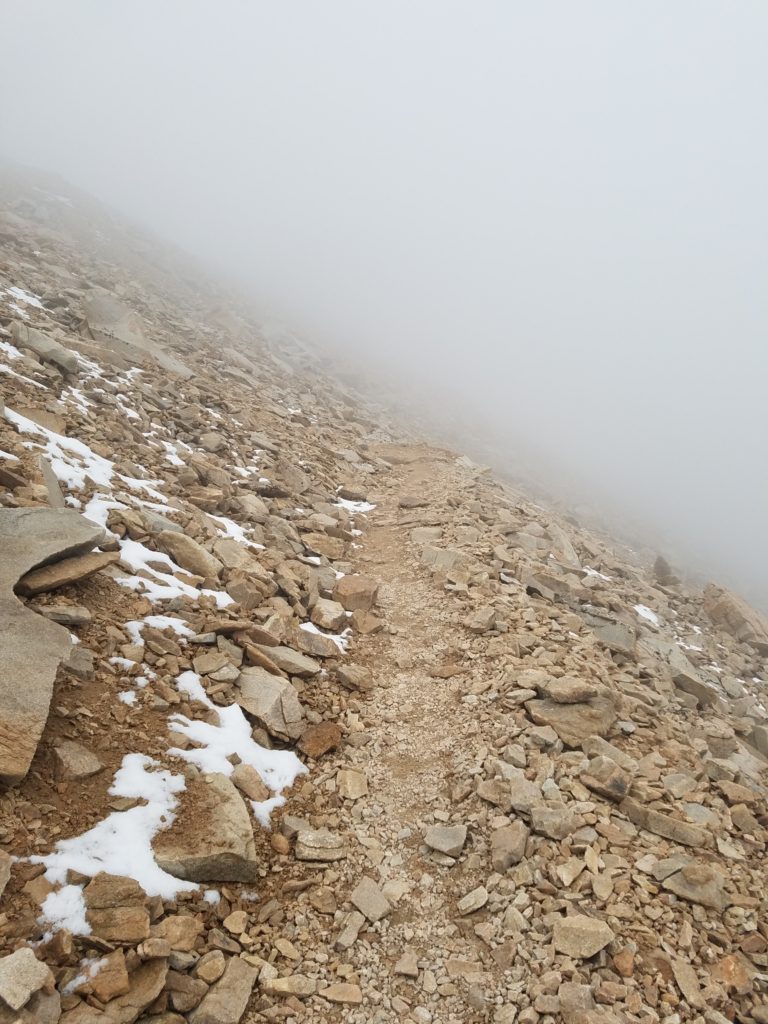 Into the fog, ascending Kearsarge Pass

If you managed to read this whole post I hope you are motivated to get outdoors and bring on the adventure!

"I went to the woods because I wished to live deliberately, to front only the essential facts of life, and see if I could not learn what it had to teach, and not, when I came to die, discover that I had not lived" -Thoreau, AT 2015, PCT 2016