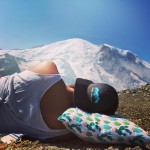 I was climbing out of the river valley (Hauser Creek) when darkness was closing in. I managed about 16.5 miles my first day with an inspired attitude. I knew Lake Morena was only on the other side the ridge but it was getting dark and the rain had just paused. I quickly reached a campsite (I spied on Guthook guides) and put together my tent in record speed. I zipped in, snug as a bug in my sleeping bag as the next bout of rain hit. A couple of girls I had passed earlier came up the trail to head into the darkening night. 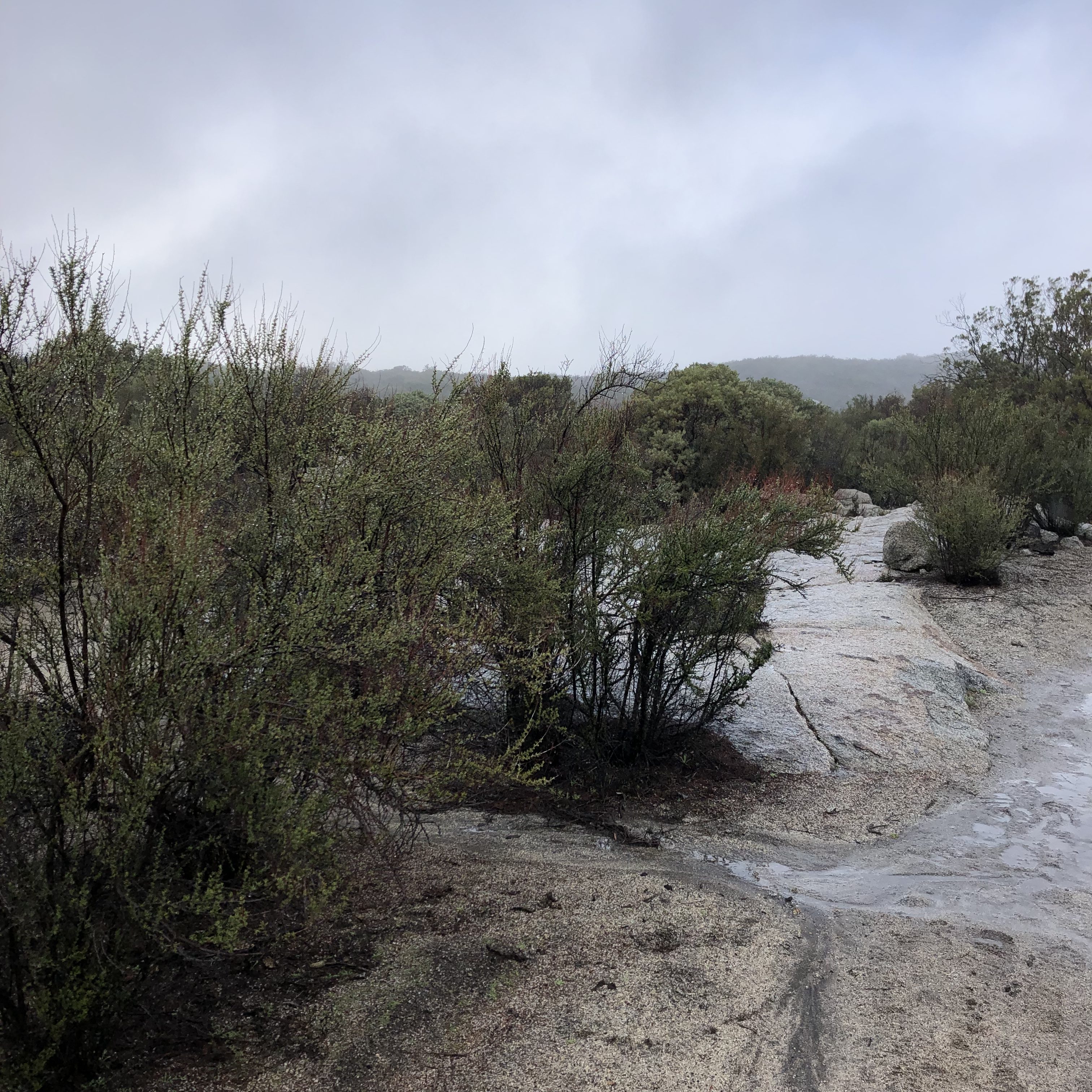 Hmmm, I think I found I was rather glad to have not pushed onward. The rain did not stop for the next 12 hours. My tent, a Big Agnes Copper Spur, had not been fully tested in constant rain before, so I guess this first night will be a true test of my equipment. I ate cold Clif bars and thought methodically on how I was going to break camp in the morning and attempt to keep everything dry.
In the morning the rain was still sprinkling down. I thought briefly about waiting in my cozy, mostly dry tent for the rain to stop, but then again what would be the point of that.
So  I began to take apart my tent from inside out. I used my ultralight towel to dry the inner tent and groundcloth as best I could and packed them separately from the rainfly. It took awhile to maneuver the poles and stakes to get everything apart while still covered, but I think it was the right thing to do. Now, I thought, I at least could set up a pretty dry tent tonight and not start out with a soaked one. 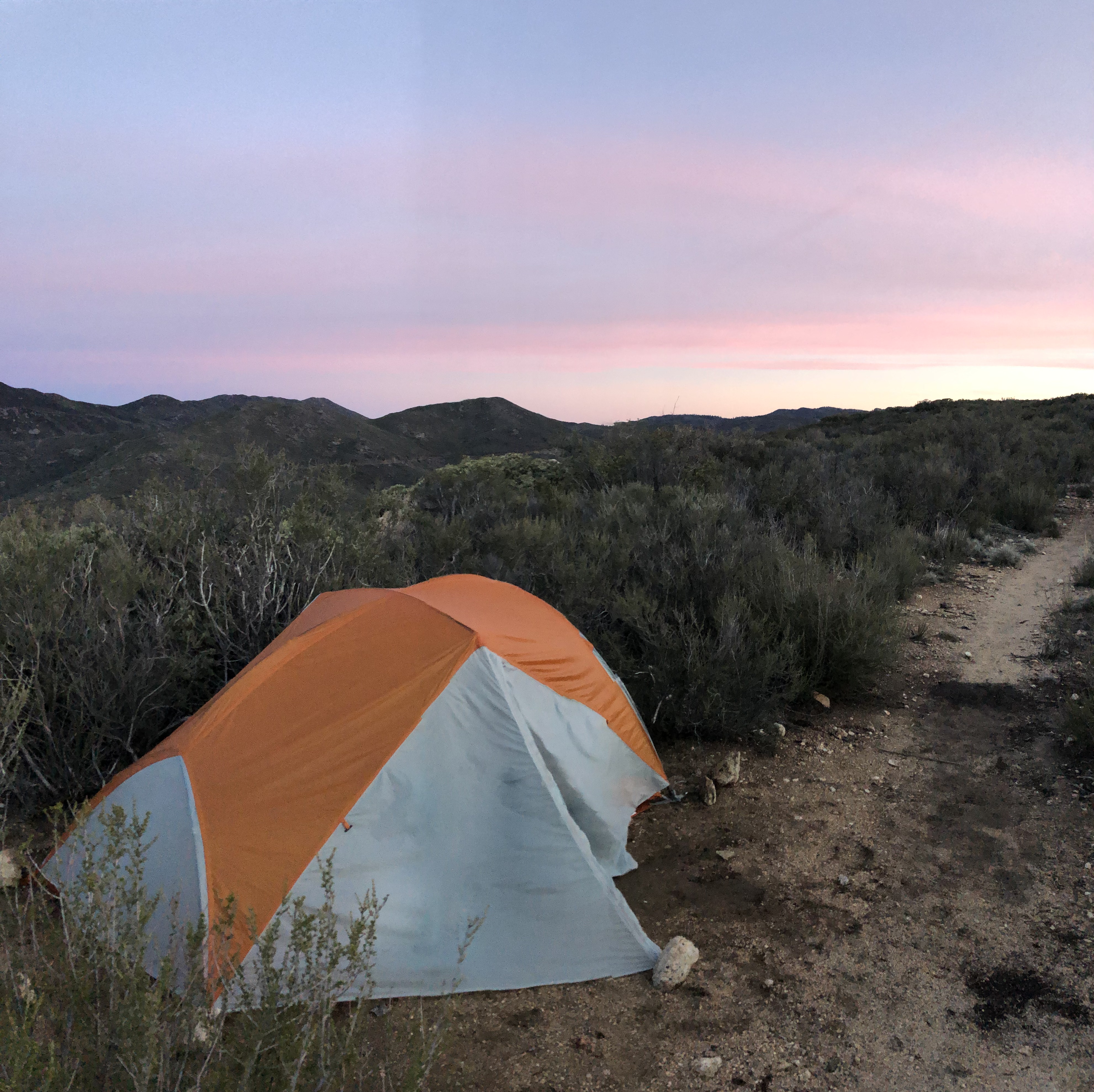 After a long day of hiking I came across a grouping of tents next to a lovely stream. The site had three tents already pitched. I guess the night was still early and I didn’t want to crowd the site, and so I moved on up the hill. Two miles up the ridge I needed to stop; my body was still adjusting to the constant stomping up the trail.

I suppose I should have known how bloody windy the ridge would become in one short hour after my arrival. As soon as the sun went down, my tent was alive, billowing back and forth in huge, windy gusts. The noise of the canvas quaked and shivered,  leaving me in fear of caving in. Shoot. Well, this one was on me. I could have been more social and done the smart thing. 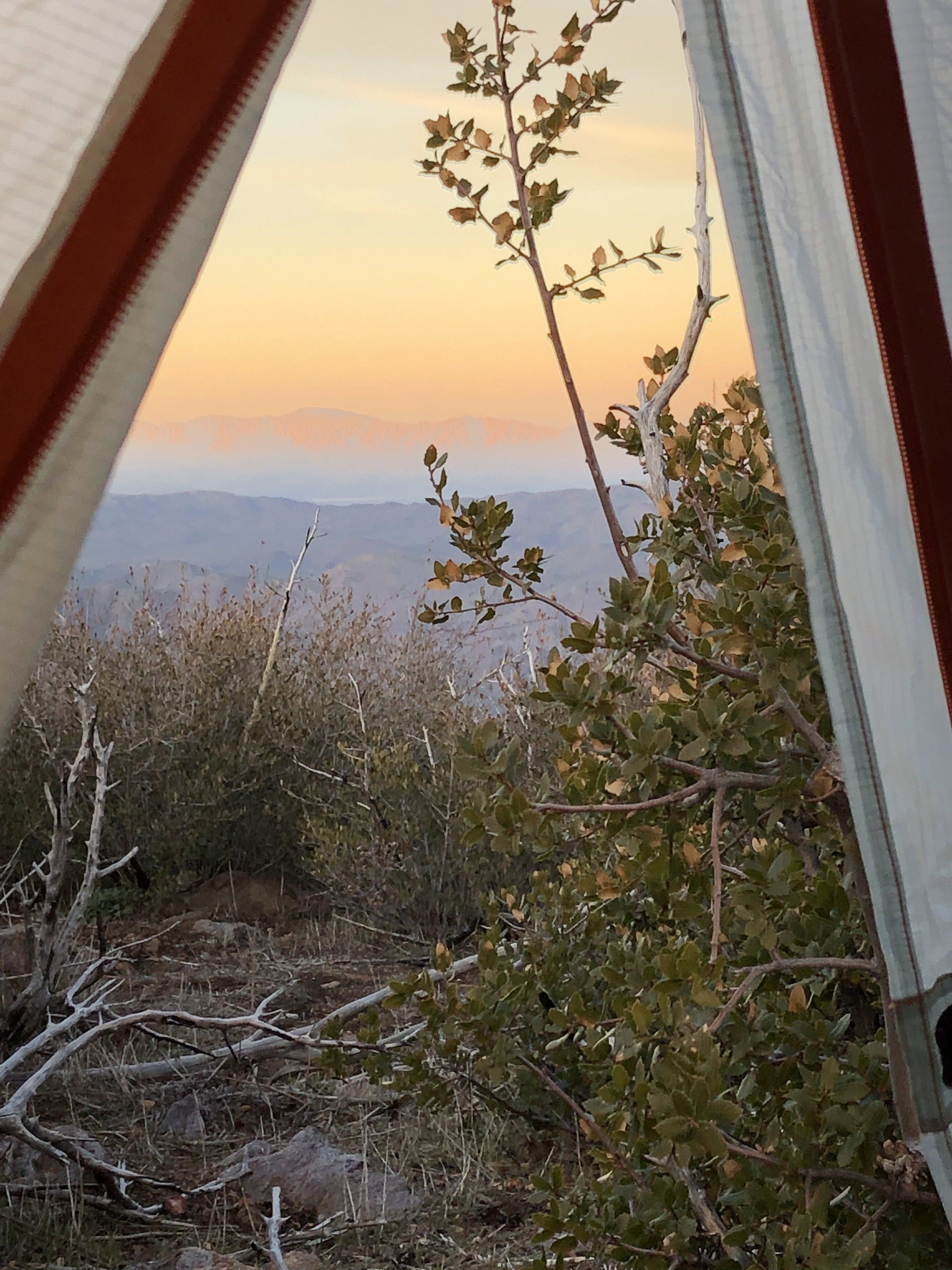 I was lying in my sleeping bag, which had finally warmed up to a nice toasty pocket, thinking, “Crap, crap, crap, I gotta go pee.” It was approximately 8:30 p.m.; the sun had gone down around 6. There was no way I could make it till morning. Hmmm, the dilemma.

Also, my tent was just about being blown to bits. The wind was billowing in such a way that both sides of tent seemed to concave.  Surprisingly, I felt rather calm; the rationale I held was that if my tent concaved I would still be in it and it would be fine. However, I couldn’t tell if the thwacks on the rainfly were large rain drops of bits of bush. If it was raining, too, then all bets are off and I would lie in my pool of misery and regret for camping a second time on the edge of a beautiful view. Note to self: don’t camp next to the edge, obviously the wind was flowing down and into the valleys.

OK, so still had a full bladder. Shoot. I guess if I go really fast then I could jump back in and spend some time wiggling back and forth to warm up fast. Here it went.

Dang, the air engulfed me. The wind was gusting so hard that I couldn’t even breathe. Then the sky caught me. Looking up, a vast, beautiful array of stars so clear in the sky. Wow. Dumbstruck, I was clipped in the cheek with a twig whizzing by me on its way down the mountain. OK, business first. I relieved myself, allowing the wind to clean me up. Jumping back in to bed I stared back out, examining the Big Dipper, the North Star, and Mars low on the horizon. Beautiful.

Glad I went to pee. 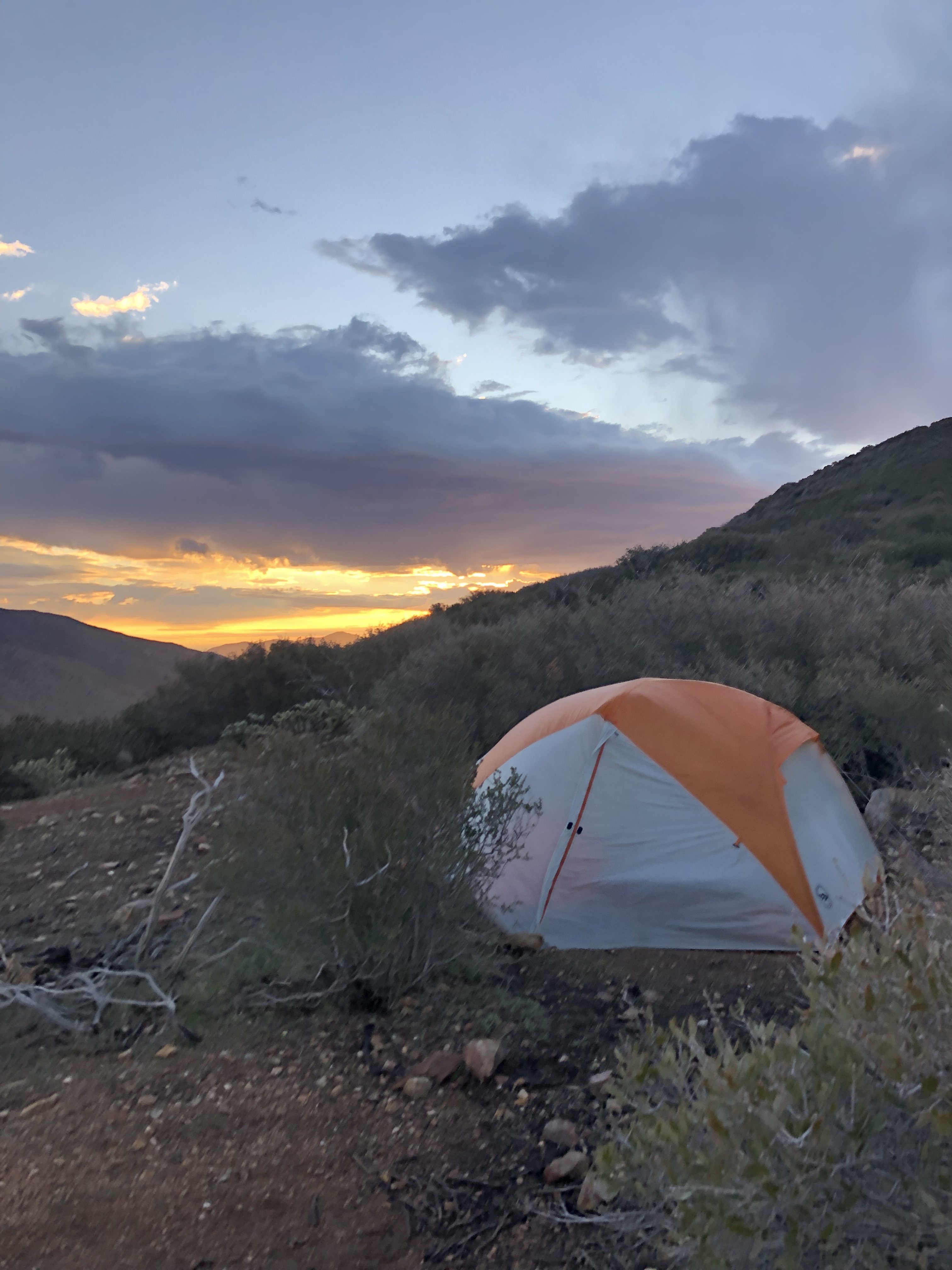 Again, I soldiered on from the valley up the ridge crest and camped at a higher elevation. Only this time I picked up a friend who was having tent troubles. It seemed that the design of her tent wasn’t fairing too well in the high 40-60 mph winds and hard rains. All night I could hear large gusts of winds and rain from a distance pass over adjacent ridges and then eventually hit our crest.
Then, gazing up at my tent ceiling I could see the distinct flashes of lightening. I began counting, one one-thousand, two one-thousand, three-one thousand, OK, I got to six when thunder claps. OK, about six miles away. I begin again as more lightening flashed, which yielded about the same distance away. Even in the midst of a storm when do we bail? Get out and start heading to lower ground? We were fairing really well, actually; the tent had not yet been breached by water or collapsed by wind. I was even at a sweltering hot warmth in my zero degree bag, but I hadn’t accounted for lightning.
It flashed, illuminating the walls of canvas like someone was just outside taking a photo of us. About 4,160 feet up, we weren’t the highest in the area but high enough to be concerned. OK, I got to eight one-thousand. The lightning was moving away. Holy cow.

I wonder about the other hikers and how they are faring at this point. I had packed pretty heavy with a warmer sleeping bag and my two-person tent. But these aren’t the conditions most had thought they would experience on the PCT. I’m glad I extended help to my new friend. It would have been a terrible night, soaked and cold. I can understand now why a night like this one could cause many a person to bail or get off the trail, at least for a time.

I stared up at my tent and watched the top of it bounce around, wondering when it would possibly break under the pressure rather than bend. The rain beating down loud and fast. Then all would go silent for a few moments, maybe a few moments more. In the distance you could hear more gusts moving in. And sure enough they would strike. 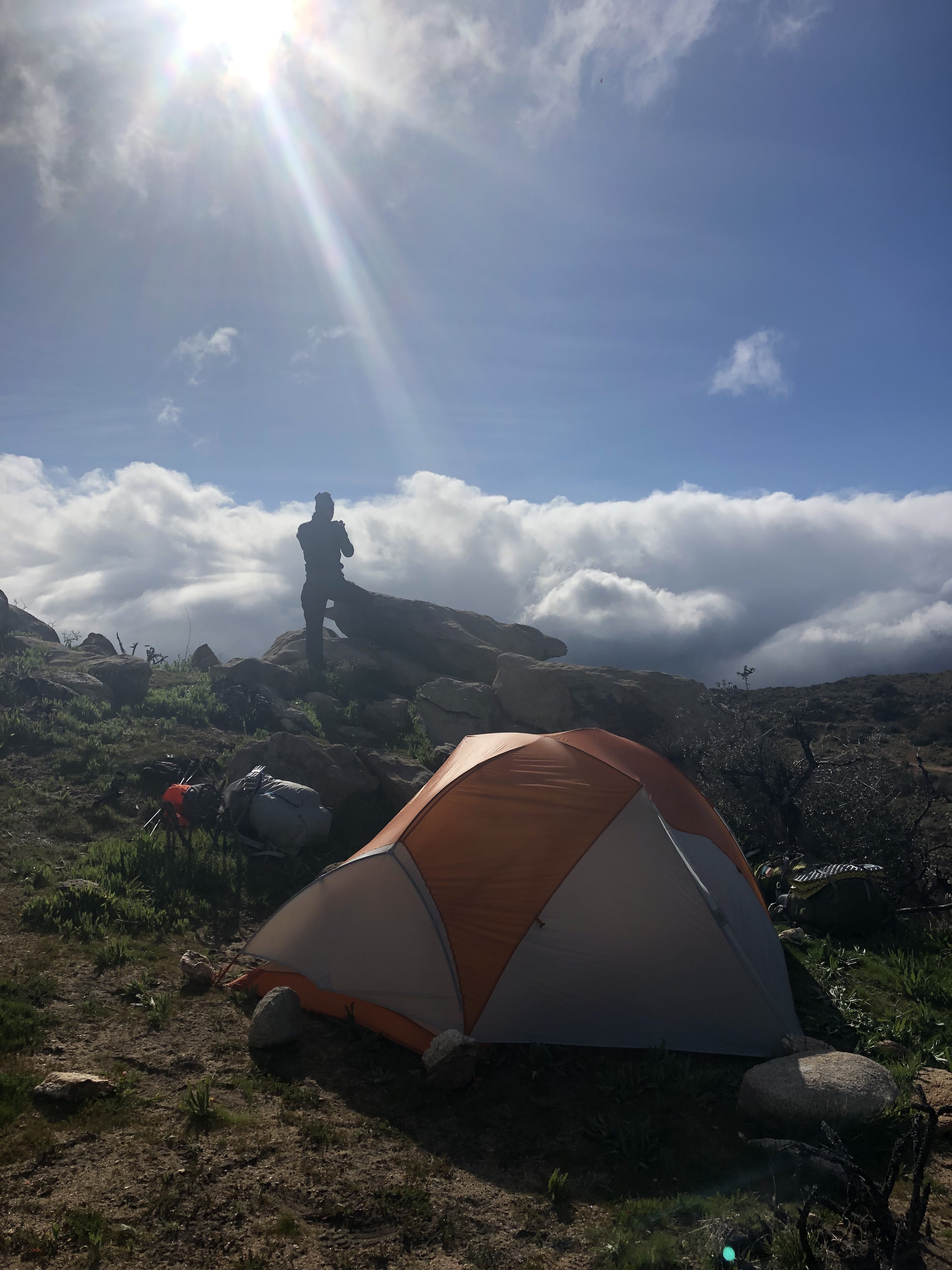 The ever-winding trail going up and down, in and out of hillside gullies was met with a fierce headwind. At the inner, protected corners of the gullies were some wind-protected campsites. Well, for a distance I could see huge rain clouds closing in. For the last three hours I was hiking at a clipped speed, trying to get as far as I could before I thought the storm would hit.

What a stressful game of guessing when would be the last time a tent could be pitched without a downpour. Hmmm, it seems that this time I had underestimated. I pitched a little too early. However, from the looks of the storm it was quite a nasty rain and wind-filled mess. Better safe than sorry, my mother would always say.

Korean-Adoptee-American. Student of Geology. Rock Climber. Amateur Mountaineer. Full of Irrational Fears. Also Too Rational. In short, I grew up in Oregon, graduated with a degree in geosciences, and planning to solo thru-hike the PCT, NOBO, in March. I really, really like rocks and there seems to be a lot of them out on the trail.