Week Two: A Horse with No Name

The Anza-Borrega region is bleeding into the Mojave area now, and we are turning into desert animals.  Our days have turned to dusty walks along cliff edges, surrounded by an alien army of cacti.  Cholla reach their spidery fingers towards us while Barrel cacti stand stiff and resolute.  Ocotillo seem to rejoice with arms in the air, Beavertails offer friendly-looking palms that would fill our flesh with needles. 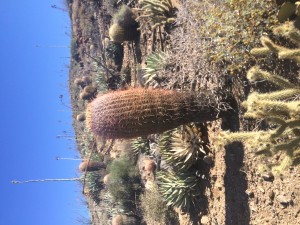 When I think back to our wet home where cloud seas form below peaks we have camped on, I wonder how it’s possible that a place can be so dry.  So dry that the earth and even the rock crumbles when touched, breaking into thousands of pieces that clog our socks despite tight gaiters.  There is no mistaking the earth from the sky here.  Down is always brown, green, red, and yellow – wild autumn colors without a deciduous tree in sight; Up offers sharp blue sky, pointed stars, a sun that cuts through wispy clouds and a moon that burns through our tent at night.  With the moon full now, it feels like we are sleeping under a giant spotlight. 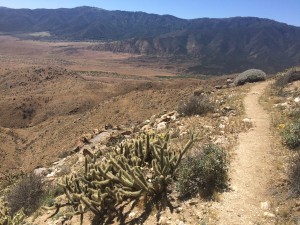 Trail angel Ed gave us a ride out of Julian, and I used our remaining service to call shoe companies.  My feet have expanded more than usual this time, it seems.  Walking through the low desert in heat, I couldn’t help but laugh at Merrill shoe’s hold song – ‘On a Horse with No Name’ – it’s been one of our favorites to sing as we walk.  It was a hot uphill trudge roughly 17 miles to a campsite Camel (Shaughn) knew about because last year he used it as a base for trail work.  Camel was very proud to show us the (exceptionally well cleared) section he worked on and the location of his team’s old privy trench (It has been verified that there were no traces left).  The spot was beautiful, too, with a waxing moon lighting up a little greasewood-covered cliffs, and dozens of flat, sandy spots available. 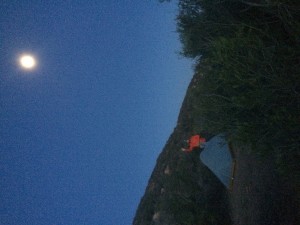 Holly, who is hiking a short section of PCT, was set up there and kindly tolerated us chattering away for an hour and a half while we all made dinner and enjoyed the warm night.  We decided officially that Julie’s trail name is now Toe-Touch, for the toe-touches she rewards herself with every morning, evening, or dull moment.  And finally, Jon’s trail name is now Centerfold, for his favorite song by the J. Geils band.  At a later date, Centerfold is going to explain this decision in detail through a guest post. 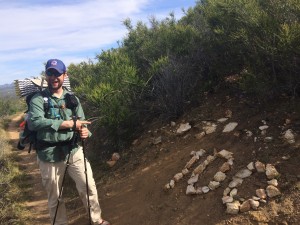 We got up early and made 15 miles to Warner Springs by 2:20, which would be unheard of on the AT (at least by our lazy hiker standards).  The terrain was amazing, rolling downhill soft trail with beautiful wide fields and unexpected oases where cottonwoods shaded little streams.  It was like stepping outside the pages of a book, walking into a different story than the one we were supposed to be in. 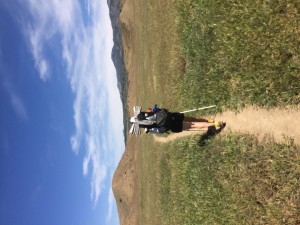 We walked through a bunch of wide open meadows until we came up to Eagle Rock, which actually does look like a giant eagle: 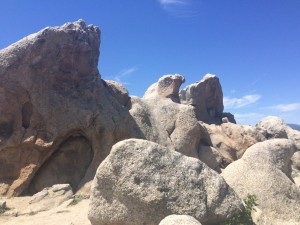 A couple miles later we hit the road where Warner Springs Resource Center is.  We all needed to get a food drop at the post office in town and we were pretty intrigued by the ‘massaging foot baths for hikers’ in Yogi’s trail guide, so we stopped at the center.  There must have been fifty other hikers there that day.  The people of the center were unbelievably kind, driving us to the PO, charging our devices and selling us cold drinks for a song.  The night turned into an evening of catching up, laughing, and playing music with other hikers, who blanketed the lawn under an old oak tree with their tents.  There was also plenty of foot washing and laundry using huge buckets that we filled by the spigot in back.  Definitely a hiker’s paradise. 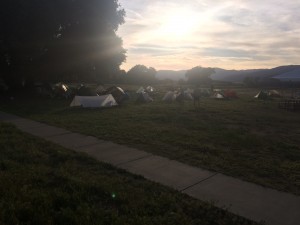 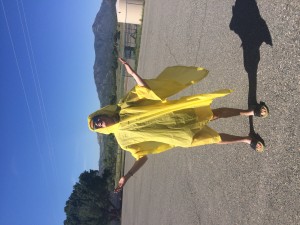 The next day we headed out late for us, around 9 AM. The day was already hot when we started, but we found lots of distractions from the heat.  We took turns on an old tire swing a few miles in, and Camel even stopped to get some trail work done with the most weather-worn pick matic that has ever existed: 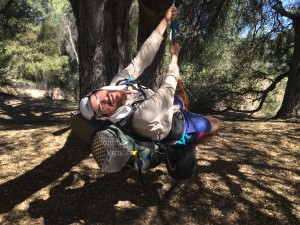 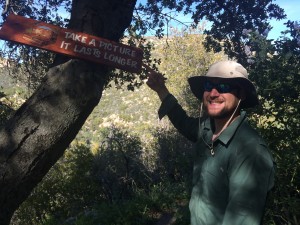 The day ended with what we were pretty sure was a trap.  A sign that said ‘water and shade’ pointed off the PCT and we climbed up to an old jeep road to discover the water tank we had heard about.  We were in the midst of a 25 mile dry stretch and needed water desperately, so we headed down to trail angel Mike’s place to get water.  It ended up being a fantastic decision, even if for our morale more than our health.  Josh, the caretaker down there, made us wood-fired pizza for hours while we sipped beers and talked.  They let us camp and in the morning, Tom from Kennedy Meadows made us coffee and told us trail stories.

We’re falling into a comfortable rhythm with each other now.  Typically Centerfold (Jon) and Camel (Shaughn) pack up early and take off before the sun slips over the ridge, while Toe Touch (Julie), Little Spoon and I like to take our mornings slower and hike harder in the late part of the day.  We all seem to have agreed, though, that siestas are the way to go during the hottest part of the day. 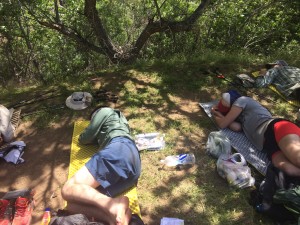 After a long siesta that day, we did some more grueling climbs in the late afternoon heat, ran into Blur and a couple other hikers.  ‘Doctor Jones’ is an archaeologist named Rick McClure who we discovered actually knows some of the same trail work people we know from Trout Lake (Hi Amanda!)  We camped at a big Boulder field that night and I tended to my feet. 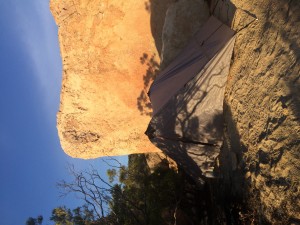 Unfortunately my feet aren’t doing great this hike.  Perhaps because the PCT involves so much consistent pounding instead of the maneuvering and rock hopping that the AT requires, or maybe just because I’m older and my body is reacting differently – my feet are widening much faster than on my last thru-hike.  The wide Asics I have are far too narrow still, and have started to pull the nails off of my big toes.  On that night, in front of an incredible sunset, I mourned my left toenail fading from yellow to black.  Little Spoon pretty much tended to my every need, even letting me wear his flip flops in the middle of the night to go to the bathroom.  When I got outside, though, I felt ridiculous.  In front of me hundreds of brightly colored lights spread out like a net on the desert floor, while a shocking full moon glowed overhead and illuminated the sandy cliff.  It was Anza, the town I had completely neglected to notice before when I was too busy feeling sorry for myself. 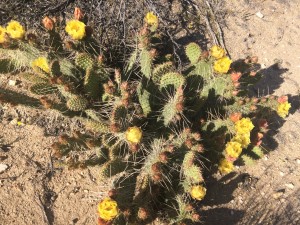 I slept soundly the rest of the night and woke up at six, eager to get going.  Camel and Centerfold had already taken off, excited for Idyllwild.  The first couple miles were uncomfortable but soon Doctor Jones joined us and the British Family appeared – the last five miles into town flew by, and soon we were walking the road to Paradise Cafe with burgers on our minds.

We got the famous Jose burger – which is absolutely enormous – picked up our packages, and hitched three different cars to take us closer and closer to Idyllwild.  The people of Southern California have been so incredibly helpful, bending over backwards to help hikers.  Although I love the people of the East Coast, it is a little shocking to see so much positivity, especially when it feels like the trail itself is such a reward.

Anyways, that brings us to Idyllwild where I sit and take full advantage of their amazing hiker amenities – like three dollar tent sites, huge servings of food, and a library that seems overjoyed to see hoards of semi-clean people wearing rain pants and charging their devices.  I want to move here.  My new shoes weren’t wide enough either, so I went to the outfitter in confusion.  They measured me and told me one foot is a double E and the other is a triple E, which leads me to believe that my whole body is actually melting out the bottom of me like pancake batter.  In any event, an extended stay in Idyllwild let me get in the research I needed and now I have three sets of shoes coming to Big Bear City.  If one of them doesn’t work, I’m just going barefoot.

Coming up, we aren’t sure at all what’s next.  There are two major trail closures in the next hundred miles, and everyone is talking about what to do.  It looks like we might be skipping the first section to avoid a road walk on a sketchy road, and trying to piece together our own re-route for the second.  This next week will be an interesting one, I’m sure.

Other awesome sources of PCT lore:

Sponsors of Chuckles and Spoon that you should check out: